Those wacky Rabbids are back. I suppose the Wii U wouldn’t be complete without a party minigame compilation starring these lovable loons; plus, they rake in the cheddar. So here we are. A stopgap before Mario Party 27 that adds to the new system’s launch yet another title from Ubisoft, which is backing the Wii U with gusto, between ZombiU and apparent Rayman Legends exclusivity. The latter alone has me itching to pull the trigger on a Wii U launch-date pickup, given how much I love Rayman Origins.

In Rabbids Lands, the barmy white rodents have taken over an amusement park, where they can be expected to get up to their ears in tomfoolery and mischief. Continue reading for a brief rundown of three new minigames that take advantage of the Wii U controller. 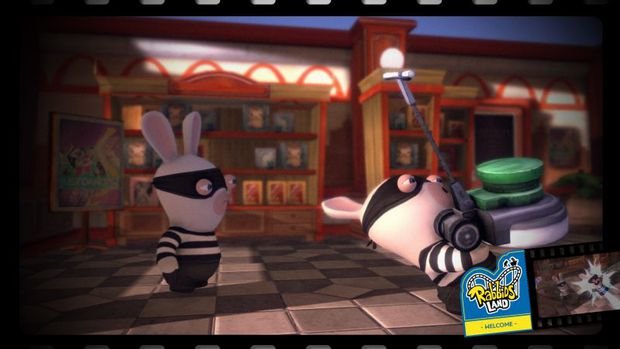 First, we had a hip, rhythmic affair — because what would a Rabbids game be without the ability to boogie down? The player with the normal Wii remote and nunchuck watches the TV screen as a Rabbid jacks a sweet ride, blasting the stereo. Shaking the two controller bits in rhythm to the scrolling musical notes causes the car to belch cool guy flames.

Meanwhile, the person with the Wii U controller watches the inset screen as their Rabbid clings to a rope tailing behind the car, tilting the controller to maneuver between the four lanes that fireballs can be coming down. Hit too many of them and the other player wins.

In what was another attraction I’ve never seen at an amusement park, the second minigame I played was Raiders of the Lost Ball. Holding the Wii U controller parallel to the floor and looking at the inset screen, one player uses the tilt functionality to maneuver three separate Rabbids around a platform, trying to collect ten diamonds. Meanwhile, the other player tilts a Wii remote to try and crush all the opposing Rabbids with a giant boulder. Winner in two out of three rounds wins the game. 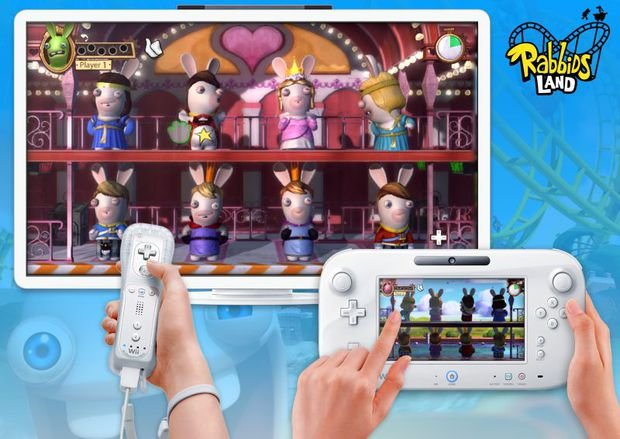 Lastly, we have a cheeky cooperative matching game. Two rows of Rabbids in silly dress chill on display. With the Wii remote, one player lifts up their outfits from the front to reveal a variety of symbols and pictures, from clouds to cherries to flowers to skulls to poop. Meanwhile, the player with the Wii U controller, stylus in hand, lifts up the Rabbids’ clothes from behind. Players have to shout the underbelly images they’re seeing until you deduce which single image is present on both sides, at which point you can match them. Doing so five times under the time limit is a success.

The Rabbid titles are often at least a passable way to drain time and occasionally good, zany fun. Soon enough we’ll see if Rabbids Land is a mere gimmick-laden cash-in or a jolly good time. It’s already competing with the bound-to-be-brilliant Rayman Legends for the go-to multiplayer Wii U game, so surely it’ll have to do some cool things to contend.