Despite current hardware’s expanding of the possibilities in first-person shooters, nearly every popular FPS released in the past decade have been slower and smaller in scope than the ones before them.

Tribes: Ascend feels refreshing on the merit that no other game compares in speed and map size to the original Tribes trilogy. Developer Hi-Rez Studios is focused on adapting the series’ strengths into a free-to-play model and updating them for a new era.

Unfortunately, I missed the boat on the original Tribes. Despite buying a copy of Tribes 2 in 2001 — I had to after the Penny Arcade guys praised it week after week — I was let down to find that it was unplayable on my 56k modem connection. A quick YouTube search makes me all the sadder to see what I missed. Tribes, for the uninitiated, is like Halo on crystal meth mixed with Team Fortress and Tiny Wings. Yes, Tiny Wings!

The main mechanics that distinguish it from other class-based FPSes are the jetpack and skiing. The jetpack is something that should be familiar to players, especially after Halo: Reach and Killzone 3. It controls how you expect, but offers more fuel than the ones in those games.

Skiing, on the other hand, is something entirely unique to the Tribes series. In order to quickly traverse Ascend‘s sprawling maps, you must learn to jet off peaks and ski down hills (a la Tiny Wings). After timing a couple dips, you’ll soon achieve max speed (going into the red on your speed gauge), which is essential for successful flag captures. 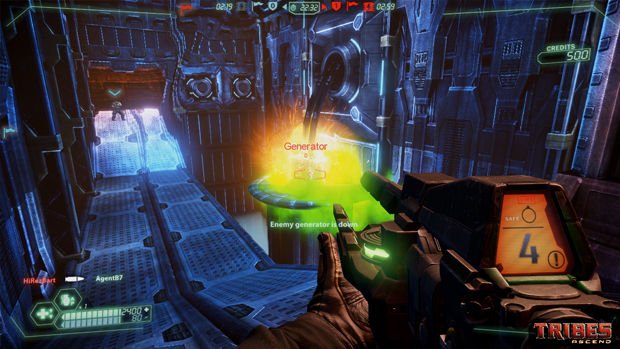 Tribes veterans will feel right at home speeding through the maps of Ascend. It’s doubtful that the game will launch with 40 maps, as the original did, but in place of more maps, you’ll get more detailed, varied ones.

The game runs on the Unreal 3 engine, but the color pallet has more in common with Unreal Tournament 2004 and Halo. The levels come to life with small details, such as spaceships and enormous planets hovering in the distance. What’s most striking about the maps is the sheer size of them — the largest maps in the Halo series can’t even compare to Tribes‘ smallest maps.

The varying hills and valleys of the two maps in the QuakeCon demo not only altered the visuals of the map, but also the flow of the game due to skiing. Crossfire, the initial map I played, is modeled after Broadside from the original Tribes. I can’t comment on how faithful to the original it is, but the spacing between generators (more on that below) and sequences of hills and trees made it fun to fly over on a jetpack or drive through on a Gravcycle.

Drydock, the other map, took place in a desert and featured much steeper hills that could send a skillful player across a great amount of terrain. Although only these two maps were shown, I was told the upcoming beta will have four maps. 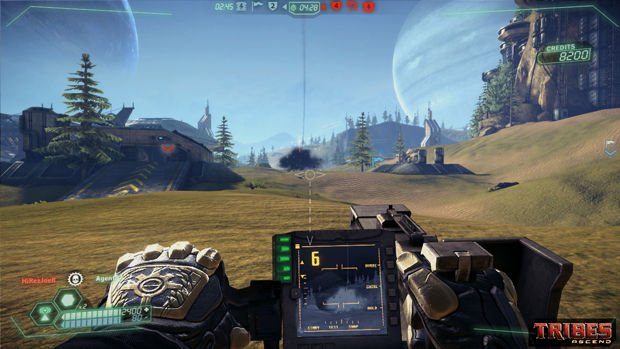 Capture-the-flag is a game variant that I never enjoyed. This is mostly due to the speed and aggravating flag resets you experience in games like Unreal Tournament or Quake 3. However, when played with the expansive maps and player speed of Tribes, this mode becomes something worthwhile.

In addition to capturing/defending flags, you’ll also want to destroy the opponent’s generator, which powers the team’s turrets (these guys are tough!), vehicles, and inventory stations. This creates a much more dynamic game of CTF, where you are constantly juggling between defending your base and attacking an opponent’s generator.

Above all, Tribes is a team-based game. As the Hi-Rez announcer said as we played, “If you find yourself playing deathmatch, you are doing it wrong!” That being said, the beta will feature Rabbit-Chase, a solo CTF-variant featured in Tribes 2. 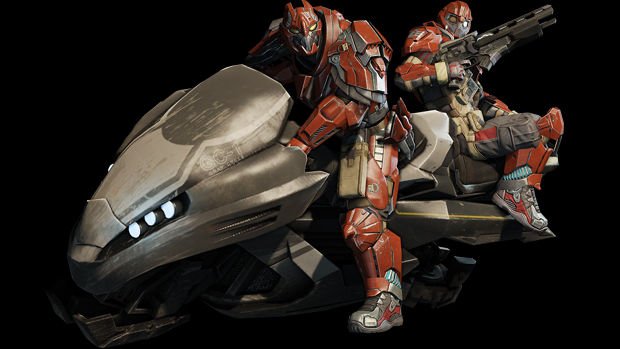 Every defeated opponent drops credits that you can pick up and spend at the vehicle station. Your options are a fast motorcycle (Gravcycle), an aerial fighter ship (Shrike), or a powerful, slow-moving tank (Beowulf). The final game will also feature a transport vehicle that can carry up to four players. Without it, the heavier classes in the demo seemed a bit useless.

One of the most memorable moments of my play-session was when I chased an enemy Gravcycle on one of my own. Thanks to the physics and Halo-like controls, it handled perfectly. The chase became an intense game of cat-and-mouse as we dodged trees and drove through buildings, all while absolute mayhem surrounded us. I can’t imagine how much better it would have been with a full 16-on-16 match (we were playing eight-on-eight).

In the past, Tribes games offered loadout settings that let you chose equipment and armor type. Ascend narrows the selection to a number of pre-set classes based around size and role. While it makes the game approachable to newbies (here is your sniper, over there is your spy), the customization has already caused some backlash from fans online.

During the demo, I played mainly with the sniper, scout, and soldier classes. All of them felt good but lacked the distinguishing features you find in Brink and Team Fortress 2. Speaking of TF2, rocket-jump experts will be happy to have another game to show off their skills. Achieving max speed and rocket-jumping off a hill is one of the most effective strategies I saw during the demo. 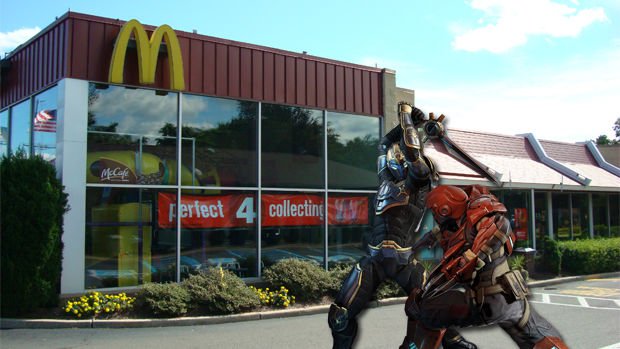 Don’t call it a budget title, because it’s free

I’ve read the complaints from series fans online: “guns are too big,” “it isn’t fast enough,” “why no modding?” etc.

As a newcomer to the series, Tribes: Ascend feels like a great place to start, and the unique qualities of the series that I’ve always been curious about live up to my expectations. Whether they will live up to the expectations of a Tribes junkie, who knows the old maps front-and-back, is a question I’ll let an expert answer.

Hi-Rez, which previously developed Global Agenda, is offering Ascend at the price of free. The catch is that players will only have access to a set number of classes which rotate each month. If you want the others, you will need to pay. This sounds disastrous when considering team-balance.

I had fun playing the game, but it remains to be seen whether it will hold up when long-time community players get a hold of the closed beta in September. An open beta will follow later in the fall, with a full release date to be announced.

Console fans will have to wait for a while longer, however. Although Hi-Rez hasn’t confirmed a console release, they said they are interested in releasing one. Unfortunately, they are struggling with Xbox Live Arcade’s positioning on free updates (an essential part to a game like this).

Talking to the Hi-Rez members gives me faith that they will listen to the community and take the feedback from the beta into consideration. If they do, they could have something really great on their hands — not that it isn’t great fun as is.

Tribes: Ascend makes me sad that I missed out on decade of Tribes. It also makes me very grateful that Hi-Rez is bringing it back for both long-time fans and newbies like me.