Geeks seem to love screwing with natural order. Whether it’s by creating biological weapons that breed a form of undead human, or by using ugly ’80s cars to go back in time and narrowly escape sex with a younger version of their mothers, the more eccentric minds of society adore finding ways to throw a middle finger towards whomever or whatever is pulling the strings.

Unsurprisingly, some videogames have taken the concept of messing with time and turned it into a nifty little collection of interesting gameplay mechanics. Blades of Time is no exception, as you are given the ability to rewind the action a few seconds … but with a slight distinction from what we’re used to.

In Blades of Time, setting the clock back actually lends itself to gameplay, rather than merely being an easy fix for those “oops I f*cked up and died” moments. The result makes for some pretty fun moments. 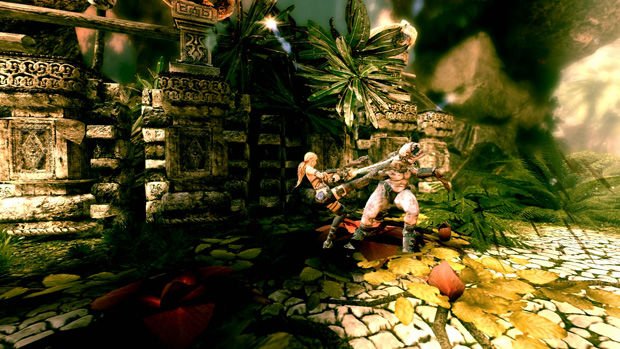 I hate to burst this bubble early on, but Blades of Time‘s narrative doesn’t seem to be much about actual time travel. Any geeks who are expecting the obligatory pulp sci-fi to accompany this tale will be a bit disappointed. As time travel is just a gameplay mechanic, its role in the overall story is nothing more than a wizard’s wand or a Jedi’s Force — a useful tool but not the main focus.

Gamers will take on the role of Ayumi, a loathingly attractive woman who finds herself conveniently trapped on an island riddled with conflict and turmoil. While in the middle of a clash between the island’s inhabitants and some ambiguous evil, Ayumi begins to uncover and harness the secret powers that the island holds in order to escape.

It’s a bit of a bummer that Gaijin Entertainment (yes, that’s their name) decided to go with a fantasy approach, rather than feature the expected sci-fi themes, but … well, if you’re not necessarily interested in the fine details of time travel, perhaps the narrative could grow on you. To be real, it’s got a hot woman with minimal clothing and large cutlery; nobody’s expecting H.G. Wells here, obviously. 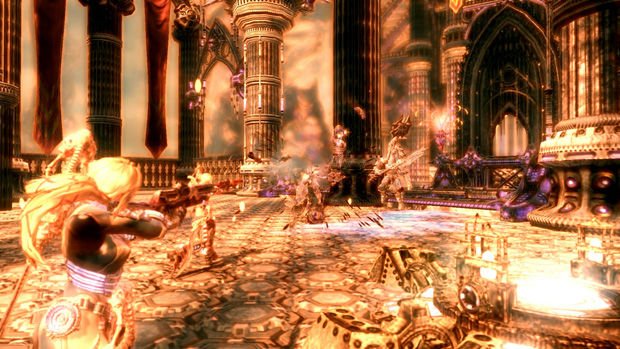 Two heads are better than one

This is the interesting part: the time-travel mechanic. While Ayumi hacks away at her enemies in the oh-so-popular God of War fashion, she can rewind the action to give herself a nice advantage. This isn’t Prince of Persia: The Sands of Time logic, though, where the player is forced backwards with the flow of time. Instead, time rewinds around the player, and they witness an alternate version of themselves being affected by it.

Think of it as The Time Machine versus Back to the Future. In the former, the “Time Traveler” himself moves within a single dimension of time and space, whereas in the latter, Marty McFly finds himself in alternate universes where different versions of himself exist.

What does this mean in terms of Blades of Time‘s gameplay? Once you’ve turned the clock back a bit, players get to fight alongside that alternate version of themselves until that moment they decided to go back. This means using that older version of Ayumi as a second pair of blades, or even a nifty distraction at times. Some enemies are so swift that circling around them to hit the weak spot on their back is impossible. Reversing everything a few seconds gives “Ayumi A” the opportunity to circle around the enemy, all while it’s hacking away at the front by “Ayumi B.”

I was quite surprised by how well this mechanic worked. From a design perspective, I couldn’t imagine how much of a pain it must have been to program and implement it into the game. When I asked Gaijin Entertainment co-founder Anton Yudintsev about it, he merely answered, “It’s actually more difficult to design a concept than it is to make it.” Well I’ll be damned; I learn something new every day in this industry. 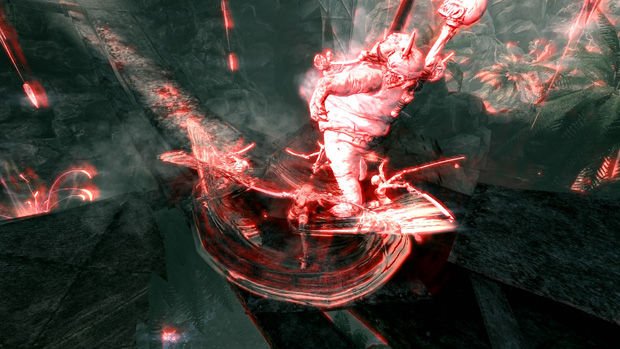 Yep, Blades of Time features a mode much like League of Legends or Defense of the Ancients, known as “Outbreak Mode.” Basically, players can face off against each other or computer opponents; both sides are given a few lines of turrets and a steady supply of spawning minions. The goal: destroy the enemy’s main tower.

I was a little perplexed when I was first told about this mode. Once I played it, though, I actually enjoyed it. Any fans of MOBA games (I myself am addicted to League of Legends) will feel right at home, as the same rules apply in Outbreak Mode. For example: turrets will attack you unless you let minions rush in first, and players are even given their pick of two special abilities with their own cooldown times.

Part of me wonders what fans of this genre will quit their actual MOBA games for Blades. The mode is pretty fun, and the third-person perspective is an interesting twist on the genre, but it still is a bit too simple. Then again, MOBA games aren’t exactly rocket science, themselves. Perhaps some people will love the shit out of Outbreak Mode. I certainly enjoyed it. 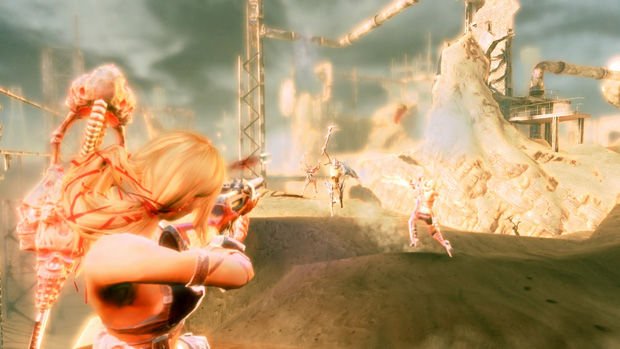 Time is on our side

I won’t lie, Blades was nothing like what I expecting; the fighting mechanics are deep and fairly intuitive; the weapon selection is considerable; and taking advantage of time is a fun addition to the gameplay. All that’s left is for me to have more than an hour with the game, then I can make some real judgments.

If you dig straight fantasy, fast combat and amusing gameplay features, then you should keep an eye on Blades on Time. Doubling the attractive protagonist is an enticing concept, after all.