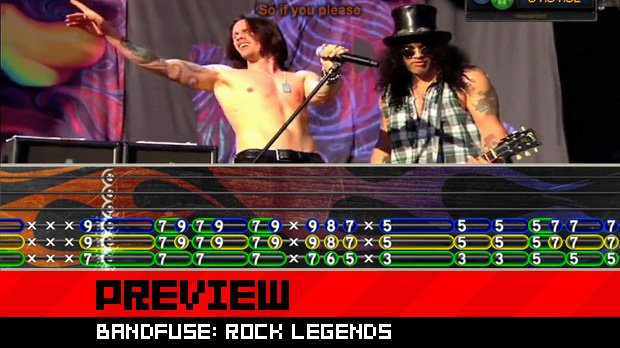 I wasn’t quite sure what to expect when I was invited to see a new, previously unannounced music game. Internet hyperbole states that music games, or rather rhythm games involving guitars, are dead, killed by over-saturation from franchises like Guitar Hero. Nobody is jumping to make a new color-matching game when Rock Band 3 exists, with a music library built over the last four years.

But contrary to Harmonix’s underlying desire to teach music to the masses, many people never did graduate from their plastic instruments. Games like Power Gig: Rise of the Six String and Rocksmith, as well as Rock Band 3‘s pro guitar mode, attempted to teach guitar, but didn’t succeed as instructional methods for various reasons.

Now, a new game has risen to the challenge. BandFuse: Rock Legends intends to teach guitar newcomers how to play on a real guitar. Can a plastic guitar devotee like myself learn to shred?

I’m no rock expert; my guitar experience begins with playing very simple bass guitar parts in a high school rock band and ends with an embarrassing amount of hours put into Rock Band. Luckily for me, Flixist’s Max Roahrig knows his way around the strings, so we were able to test out how BandFuse works for both neophytes and experts.

The first thing I noticed when playing BandFuse is how simple the game’s fretboard is. Instead of trying to skew the perspective to simulate a vertical fretboard, all the notes flow horizontally from right-to-left. It wasn’t until I had played a song that I realized how much this reminded me of guitar tabs, albeit professionally made instead of some fan-made approximation. It felt extremely natural and easy to read. All the current graphics are placeholders, so the layout could still change, but the scrolling tabs seem near-finished. The developers seem to recognize that when it comes to visualizing notes, simpler is always better.

That doesn’t mean there isn’t still a bit of a learning curve to understand the tabs. As an unskilled bassist, my mind just doesn’t “get” chords. So when they popped up in a song, I generally hit the first chord, then flailed around on the strings until some single notes started popping up again. However, this seems like something that would go away with just a little practice. Conversely, Max was able to jump right into Judas Priest’s “Breaking the Law” and hit most of the notes, chords included.

Up to this point, we had stuck to the lower difficulty levels. The lowest level greatly simplifies the tabs, reducing riffs to just one note and removing chords entirely. The next level adds chords in, but still keeps you from getting in over your head. Curious to see how far the difficulty went, we bumped the difficulty up to the highest level, which included every note as far as I could tell. Higher difficulties also mix in palm-mutes and whammy bars, even noting how long you should bend the note.

The added complexity could be overwhelming for those just learning to play, but the finished product will have a feature that allows you to slow down, speed up, and loop sections of the song, helping you figure out a tricky part. And if there’s one section you just can’t seem to get, you don’t need to worry about failing out. For now, BandFuse has no “crowd meter” which will kick you out of a song before it ends. In fact, if you really want to, you can ignore the tabs, turn down the guitar track, and just freestyle. It’s less about beating a song to get a high score and more about absorbing the technique.

Realta is aiming for a set list of around 55 songs, with the usual mix of rock, metal, alternative, and pop rock. Some of the songs we got to play with included “The Bleeding” (Five Finger Death Punch), “Harder to Breathe” (Maroon 5), “Yellow” (Coldplay), “Sweet Home Alabama” (Lynyrd Skynyrd), and “Back from Cali” (Slash). That last song may be one of many from Slash, as he is involved with the game beyond just licensing a track. Slash is serving as the game’s musical instructor, guiding the player through the game and providing advice on how to rock.

There’s still some room for improvement, however. Currently, feedback on how you’re playing is very minimal. I’m not saying that BandFuse needs more bars and combo meters, but some confirmation that you’re playing great would be nice. There’s an electric effect that shows up when you play a note correctly, but it appears once you’ve completed the note. Realta wants to show that you’ve nailed the note, and that’s a great idea for all the notes you hold longer than one second, but it can throw you off when the electrical effect shows up on a string the moment you start playing the next note on a different string.

Of course, the game is in an extremely early state, and for now we’re essentially judging the concept and the technology, and that technology is impressive. Something I didn’t consider until it was pointed out to me is that there is no lag, or at least no perceptible lag. Deciding to test out this statement, I played a few fast notes, and sure enough, they played instantly in the game, even with added effects like distortion, chorus, and reverb. Compared to the noticeable lag while singing or performing a drum solo in Rock Band, this was quite magical.

A lot of things are up in the air for BandFuse. It’s being developed on Xbox 360, and there is a desire to port it to different systems, but no confirmation yet. A bundle with a guitar and the necessary adapter could be in the works, as Fender is a partner, but it’s too early to talk release plans. Multiplayer will be present in some form, though it’s unknown how it will be implemented. Most tantalizing is the hint of playing additional instruments like a USB microphone — lyrics appear at the top of the screen, screaming out for some notes — but there are no announcements for now.

Still, the core game looks promising. Out of all the games which promise to teach you music, this one felt the most natural to me. Anyone interested in learning to play guitar should keep an eye on BandFuse.