It’s somewhat difficult to deny at this point that the whole motion controls movement has been a bit of a bust. Developers never quite figured out how to properly implement them into already established genres. The traditional controller has played such a large part throughout the growth of the medium, after all.

The Kinect took that a bit further, completely tossing out tangible controls and replacing them with flailing your appendages about like a mental patient. Thankfully, companies like From Software have recognized the obvious solution: incorporate bodily gestures as an extension of familiar controls. The result was Steel Battalion: Heavy Armor, which has forced me to seriously consider picking up a Kinect … or at least borrowing one from a friend.

I spent a couple of hours with this slow-paced tank tribute and realized that the sweet spot lies somewhere between the controller and the Kinect. 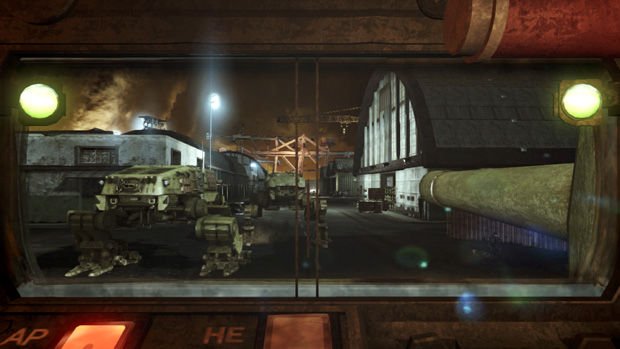 I need to get this out of the way right now: Heavy Armor is the first Kinect game I’ve ever played where I didn’t feel like a complete idiot while doing so. No simple balancing act or acrobatic feat is required during the fun. In fact, the majority of the experience requires you to be comfortably seated. Fat people, rejoice, for we have secured our victory against active gaming.

From Software was quick to state that their primary goal was to make a Kinect game for the hardcore audience, and push the add-on away from the regular mini-game titles that plague anything with motion controls. Their first principle: While hardcore gamers might be intrigued by the concept of gestures mimicking actions, the majority of their dedicated gaming lives have been experienced via the controller … and there’s no reason to completely get rid of that.

In Steel Battalion: Heavy Armor, you control what is essentially a tank. In the not-so-distant future, silicon-consuming microbes have completely devoured the world’s digital technology, reverting us back to the basic combustion tech of yesteryear. Your mech, unlike the peppy, agile ones we’re used to seeing come out of Japan, controls more like a big, bulky, powerful machine actually would … slowly and ungracefully. 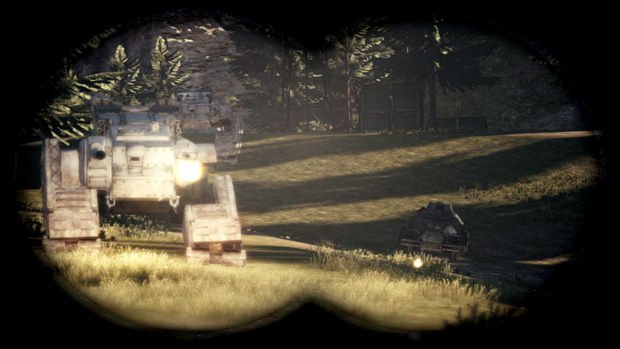 The developer put a lot of research into how the tanks of today feel and control, and it definitely shows. Your mech consists of several features with their own useful purpose, all accessed by very accurately associated gestures and movements. Reaching up and pulling down activates your periscope, which provides a nice alternative to the measly viewing window to your front. Fires may spark in the cockpit, which require you to reach to your side, open a small panel, and open the vents so you and your crew don’t suffocate.

Certain moments require a better full-scale view, so standing up will open your top hatch and pop your character out of the cockpit. Putting your hand to your face then activates your binoculars, which are easily controlled by the right thumb stick. Every command makes absolute sense, and never feels out of place or conflicting with the controller in your hand.

That’s the best thing about this game; while your tank contains a variety of Kinect-controlled features (camera monitor, engine and weapon controls, etc.), the general gameplay is actually manipulated by that thing in your hand that Peter Molyneux deemed a nuisance. Yep, when you’re trudging the landscape and blowing away enemies, expect to do so like in any other shooter: with the 360 controller.

For me, what stuck out the most when it came to the controls and features is that they’re intuitive enough to actually lend themselves quite well to the action of the game. If you suck at console shooters (like yours truly), then chances are your blast window will take enough hits to become completely shot out. At this point, any intense action will often require you to reach forward, shut the viewing hatch, and then reach up for the periscope. Failing to do so will inevitably result in a bullet flying through the port and killing either you or one of your crew. 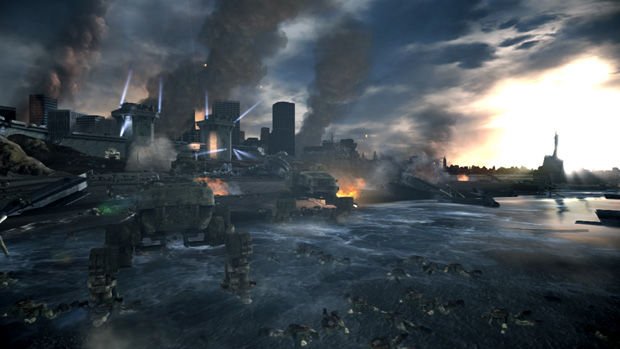 Sometimes, during an intense battle, footsteps will be heard trotting atop your mech. Quick, sound action means standing up, opening the top hatch, pointing and shooting them. Slow action results in them opening your hatch, tossing in a sizzling grenade, and you hopefully grabbing and throwing it out the bottom hatch.

The heat of battle provides several natural and scripted instances that make the entire experience feel very immersive, and can be designated as one of the few instances where motion controls actually aide in the immersion. I’m not a fan of Kinect, so every new game I play is like learning how to walk all over again. With Heavy Armor, though, everything quickly became second nature.

This is all tied neatly into a bow by the game’s World War II aesthetics. A quick look at the box art is a fine enough example, but to delve deeper, fellow soldiers don the iconic green, netted helmets of 1940s American soldiers, as well as the earthy toned attire. Even the mechs resemble beat-up Sherman tanks: faded and scuffed paint, parts falling off, and pure, raw metal.

Overall, the game was definitely not what I was expecting. Considering the track record of Kinect games, I had a preconception of Heavy Armor before even seeing it at all. The moment I heard “is played while seated” and “controller,” though, I was instantly intrigued. And then when I played it, well, I didn’t want to stop. The bastards got me all hot and bothered with a sexy game, and didn’t even have the decency to let me finish. 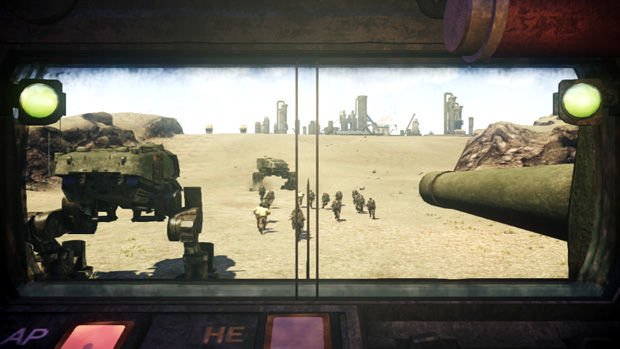 If you own a Kinect (and I know some of you do), then there’s little doubt it’s experienced a bit of neglect. Or perhaps you love it do death and play it regularly, I don’t know. If you are one of those people who slightly regrets their purchase, however — I know plenty of you exist — then you’re definitely going to want to keep an eye on Steel Battalion: Heavy Armor.

This time around, it doesn’t cost you an arm and a leg, and doesn’t come with a peripheral the size of a Shriner mini car.