Just a month after releasing the Extended Cut to their controversial ending, BioWare returns to the Mass Effect 3 universe with their first original add-on to the single-player campaign, called Leviathan. Taking place during Shepard’s war on the Reapers, players will trek across the galaxy in search of a mysterious creature known as the Leviathan that supposedly can combat the Reapers.

Taking influences from the Mass Effect 2’s Lair of the Shadow Broker DLC, BioWare hopes to match the scope and presentation with this new add-on — which will also have an influence on the ending. 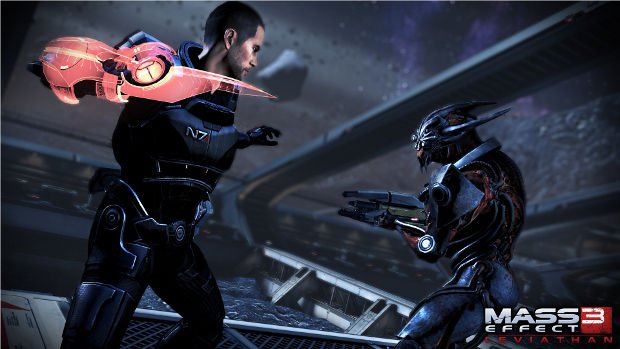 Our preview began on the Citadel with Shepard interrogating a key member of a research team investigating the presence of a being known as the “Leviathan.“ Apparently, the Leviathan is capable of destroying the Reapers, which obviously piques the interest of Shepard in his fight against them. After finding out that the research members is indoctrinated, Shepard and crew take it upon themselves to investigate further to uncover the truth.

Soon after, we jump ahead to Shepard and crew arriving at the remains of the research ship that was investigating the Leviathan on the planet Despoina. The ship is a floating wreck in the middle of the ocean, with floating orbs called “Artifacts” scattered on its surface. While the guys at BioWare were tight lipped on what the Artifacts were, they did say they served a specific purpose in the Leviathan campaign. 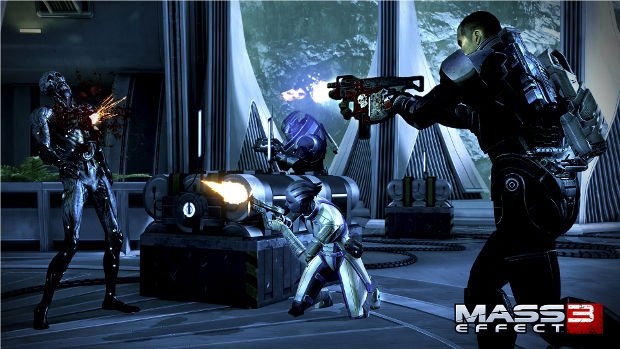 Not long after traversing across the deck, a Reaper intercepts the group and launches a wave of Husks their way. The setting of the derelict wreck proved to be a pretty unnerving spot for a firefight. In the middle of a storm, the ship pitched and bobbed to different sides during the attack making our fight against the various forms of Reaper Husks even more difficult.

BioWare is seeking to offer a challenge for fans with Leviathan, while at the same time having it scaled to how far along you are in the main campaign. For instance, taking on the Leviathan quest towards the end of the game will have the tougher enemies appear more, as opposed to taking on the mission early on where you fight basic Husks.

The Leviathan DLC also includes some new weapons for players to get their hands on. During the battle  we had access to the new Turian sniper rifle with explosive ammo, and the Anti-Synthesis assault rifle that made quick work of the Husks. BioWare took the opportunity to show off more weapons from the Firefight DLC Pack, which adds seven new weapons for use in the single-player campaign. While a number of them are from pre-order bonuses — and for the multiplayer mode — they’ve been rebalanced for use in single-player and add a lot more variety to the crew’s arsenal. 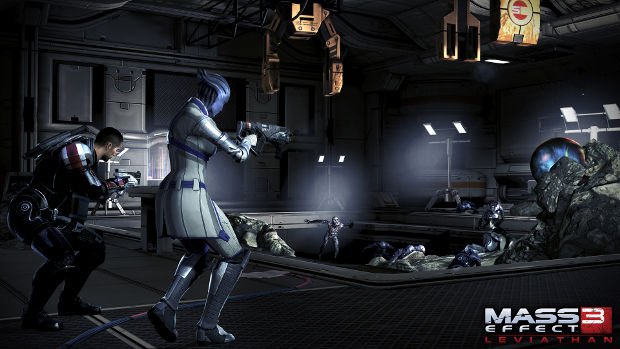 After taking out a few wave of enemies, Lieutenant Cortez arrives on a shuttle craft to restore power to the ship. From here, you have to make your way through and activate different power nodes across the deck while fighting off Brutes and Marauders. After restoring power, the research crew’s mech suit is revealed behind the deck’s blast door, and Shepard hops in to make quick work of the remaining hostiles.

With the deck cleared, Shepard jumps into the ocean in the mech suit. While making his descent, he loses radio contact with his crew and is isolated in the depths. After making it onto the ocean floor, Shepard finds another wreckage in the distance and slowly makes his way towards it, marking the end of our demo.

The Leviathan DLC looks to be a great addition to the single-player campaign. With the promise of epic set pieces, cinematic scope, and even a further addition to the ending, fans will have much to look forward to here.