The first time I saw a video for Escape Plan, I was sold. I knew it was something I had to have because of the arresting art direction that utilized gorgeous saturation and stark, black and white contrast. Of course, all style and no substance would’ve proven a huge disappointment, so I was excited to hear that the development team is comprised of people that worked on the well-received Fat Princess.

A puzzle/platformer with a fabulously unique visual flair and prominent comedic elements? The wait until the Vita’s release just got palpably longer. 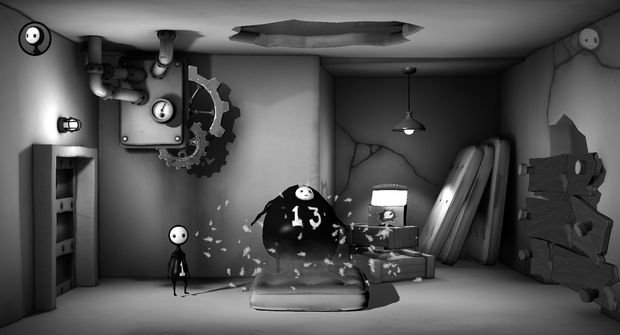 Escape Plan tasks the player with abetting the escape of Lil and Laarg, compatriots aiming to escape their captor, Bakuki. Lil, the smaller of the two, is incredibly frail and so much as tripping over a brick on the floor can result in a splattered death, while Laarg is the burly muscle, capable of breaking weakened doors and floors. In my hands-on time with the game, I played from the opening, where Lil and Laarg are being kept separate from each other, to around the point where Lil and Laarg reunite, so I didn’t get too much time managing both of the characters.

One of the interesting things about Escape Plans from a mechanics stand point is that it eschews the use of the Vita’s buttons, save for the right analog, which controls the camera, in favor of the rear and front touch capabilities. A swipe in either direction sends Lil or Laarg walking and a tap stops them in their tracks. Lil and Laarg can be interacted with in a number of other ways depending on the context as well. In one segment, I directed Lil to a soda dispenser. After ingesting the fizzy drink, Lil became noticeably antsy, and a pinch — that is, using the rear touchpad and front touchscreen in concert — sent him briefly sprinting forward, allowing me to cross a platforming section that would have otherwise prove insurmountable. 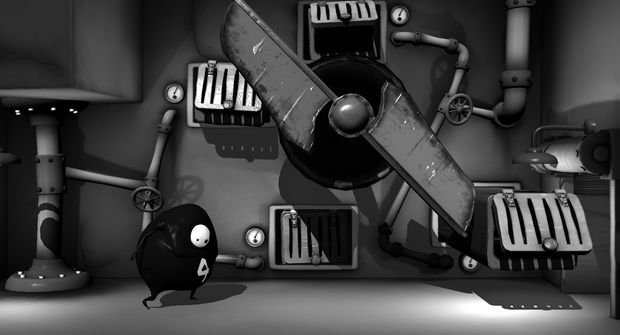 Similarly, much of the navigation revolves around managing the environment for Lil and Laarg, like knocking down mattresses for them to fall safely onto, pushing out retracted platforms or ridding the way of other impediments. Various nonessential elements in the stages can be interacted with as well. For example, you can break light bulbs in the environment or kick debris around. Though I didn’t have to use them in any high pressure situations, the touch controls worked well, as did the gyroscope in one segment where I had to tilt the Vita to guide an inflated Lil upward.

I also had brief interaction with some of Bakuki’s more loyal minions, as well as the black sheep that populate his confines (because why not sheep?). I was able to use the rear touchpad to tap on either side of the sheep to spook them, sending them running off in either direction, typically to their death — they were going to die anyways, mind you, because a minion was shooting blow darts at them. I also resolved a conflict with one minion. Though smarter than sheep, they will investigate foreign sounds, so I lowered a spring platform that naturally lay flush and upright against the wall, lured the minion onto it, and he eventually went splat right into the wall.

As I was playing the early levels, they didn’t pose much of a challenge, but I’m promised there will be some challenging platforming and puzzle elements. The game is composed of roughly 75 levels, which are said to last up to 7-10 hours, depending on puzzling aptitude. There are also hidden patches to collect over the course of levels and a five star rating system, based on how quickly and efficiently you complete the level. 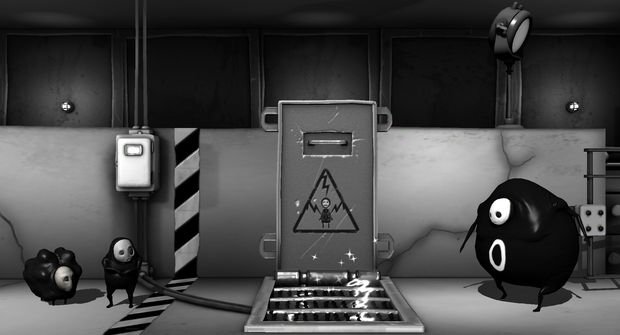 While there is definitely the potential for Escape Plan to do incredibly interesting things on the gameplay front, it’s the whole package that endeared it to me. As I’ve mentioned, the art style is just fantastic, especially when Lil, Laarg, any of Bakuki’s minions or the sheep die. There’s something deviously fun about seeing your character completely splattered against a wall, forming a deep black Rorschach test. Death isn’t necessarily punished in the game, either — it’s treated rather flippantly. Your characters each proudly wear their death count on their torsos and there is a “studio audience” that, hilariously, will laugh and jeer when you mess up, as well as cheer when you do things well.

There isn’t enough comedy in games (I’m still waiting for MediEvil 3) because it’s hard to do well. From my brief time with Escape Plan, the game does it remarkably well, which is such a fresh change of pace. The game, rather fittingly, given its puzzle/platforming nature, just nails the comedic timing, whether it’s the subtle chuckle it’s able to elicit from Lil inflating like a balloon or the deep laughter that comes from Bakuki popping up in a window and wringing his hands while grumbling manically in true bad guy fashion.

Another reason I had a constant, ear to ear smile during my time with Escape Plan is the soundtrack, which mixes a lot of public domain classics with original works. So many of the songs were instantly recognizable and transported me back to my youth, watching things like Tom and Jerry or The Looney Tunes, and they work so well in conjunction with the art style and Lil and Laarg shambling and stumbling about.

When my time with Escape Plan was done, I wanted nothing more than to keep playing. The whimsical musical score, hilariously hapless protagonists, strikingly saturated art style and comedic undertones are just too good to be true. So long as the gameplay and pacing hold up over the course of its 75 levels, Escape Plan is going to be an absolute treat. It has instantly become one of my most anticipated games and it’s definitely number one on my “reasons to snag a Vita” list right now — it’s that charming.