If you followed Destructoid at all last month, you know that the site was pretty collectively excited about Borderlands 2. Of course, in the fast cars, loose joysticks world of videogames, a month ago is practically forever ago and I know many of you have already finished gorging voraciously on looting until you were fuller than you would have liked. Unless you also caught wind of that recent DLC release, calling to you like a 2,000 calorie dessert at the end of a belt loosening meal.

My svelte level 15 Zer0 is still wasting away in lovely Pandora, presumably with a sad emoticon across his face display, because it’s been a while since I’ve found the time to visit with him. However, assuredly there are folks out there with stomachs like interminable abysses hungering for even more Borderlands, and so we have Borderlands Legends for iOS inviting you to sink your teeth into even more obsessive collecting and shooting. Go on. Take another bite. Eat until you hate yourself. 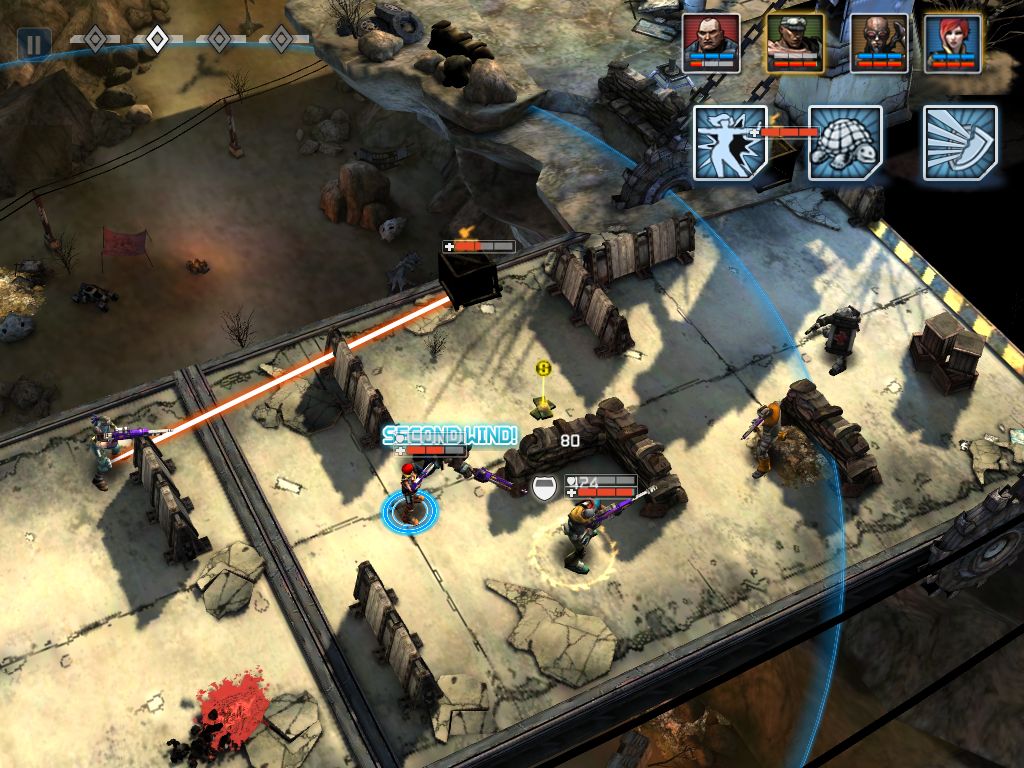 2k Games is riding the Borderlands popularity dune buggy, and what better way to continue to cash in and grow the brand than with an iOS title? Seriously, if you have any idea, leave them in the comments section. Until then, you get an iOS title coming from 2K China, which worked under the supervision of Gearbox to ensure that Borderlands Legends feels like a Borderlands game despite the drastic departure in genre.

As you no doubt have gathered from looking at this article’s accompanying images, Borderlands Legends is not a first-person shooter in the vein of the series’ first two titles, though it does hark back to the original game quite often. For one, it has you play as the four characters from the first — Lilith, Mordecai, and the two boring ones. And I mean it has you play as all four simultaneously, because Legends is isometric and more akin to real-time strategy than solo, first-person shooter play. Which is fine because I still struggle trying to play first-person shooters on tablets. 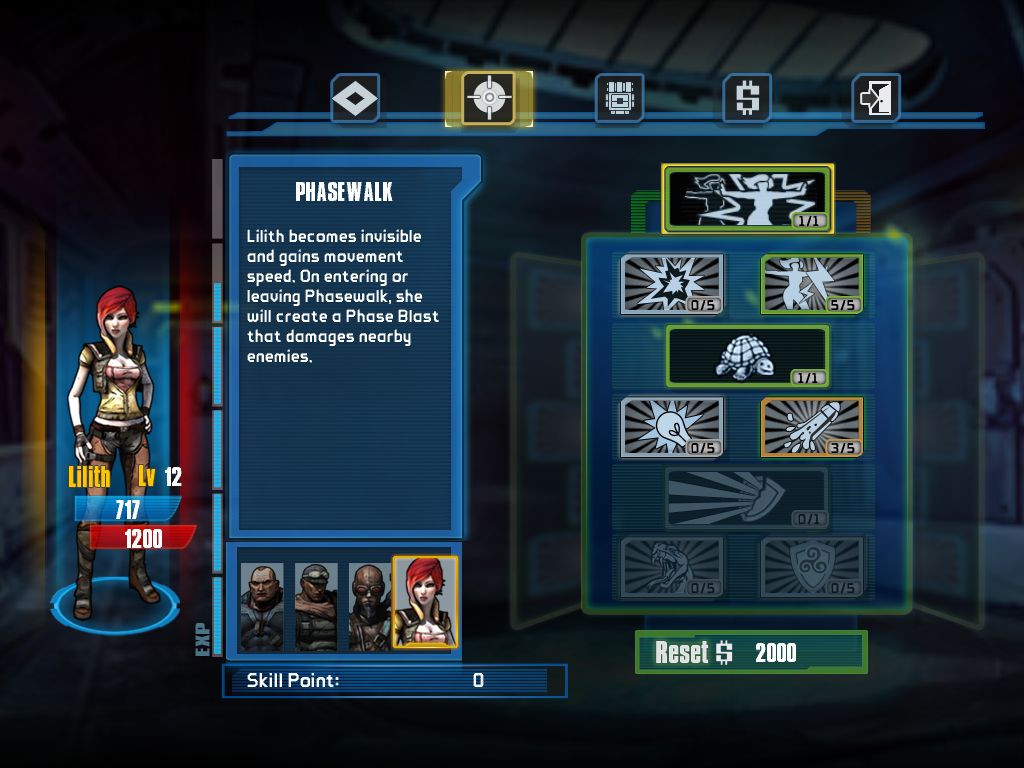 Legends sets you off on randomly generated, objective-based missions in either a distinctly indoor region or a distinctly outdoor region. More diversity shows up in the randomly generated levels and various positioning of cover and other impediments. Each screen of the level throws waves of familiar enemies at you — skags, psycho bandits, butt-vulnerable spider ants, and so on — and you don’t necessarily know how long a level is going to last, though you can be sure missions will end with some sort of decidedly more climactic encounter, like boss fights against the Skag Rider, Crimson Lance Devastator, or Hellhound (a Cthulhu-ish kin of the first game’s tentacled Vault monster). Occasionally, there will be objectives on top of killing all of the things, like keeping safe a precocious Claptrap or collecting magazine crates during the fight (a stipulation that I failed to notice while I was busy killing the Crimson Lance Devastator).

The gameplay is simple enough. You can tap and drag any of your four team members to situate them on the cozy battlefield — you get a defense bonus if you nestle them next to cover, too. You can also tap your characters and then tap an enemy, causing them to take aim at said enemy and kill them with reckless abandon. It’s simple enough and mostly works, save for a few instances of my puppets not going exactly where I wanted and instead wandering about a bit haplessly, often running around cover as opposed to behind it, though this less than elegant management never put me at too much of a disadvantage.

Action skills are also making a return, this time in threes. While you begin with one action skill unlocked, accruing enough skill points can unlock two additional action skills that just might prove helpful on the battlefield, while you can also invest skill points in your typical, more passive abilities like ones that increase health or damage output. Tapping any of the characters opens up a small dialog where you can choose between one of their three action skills to use. Additionally, the characters each have their own utility (Brick’s repairs shields, Mordecai’s grants more damage) that can be use on the character themselves or on one of their teammates for brief fits of advantage. 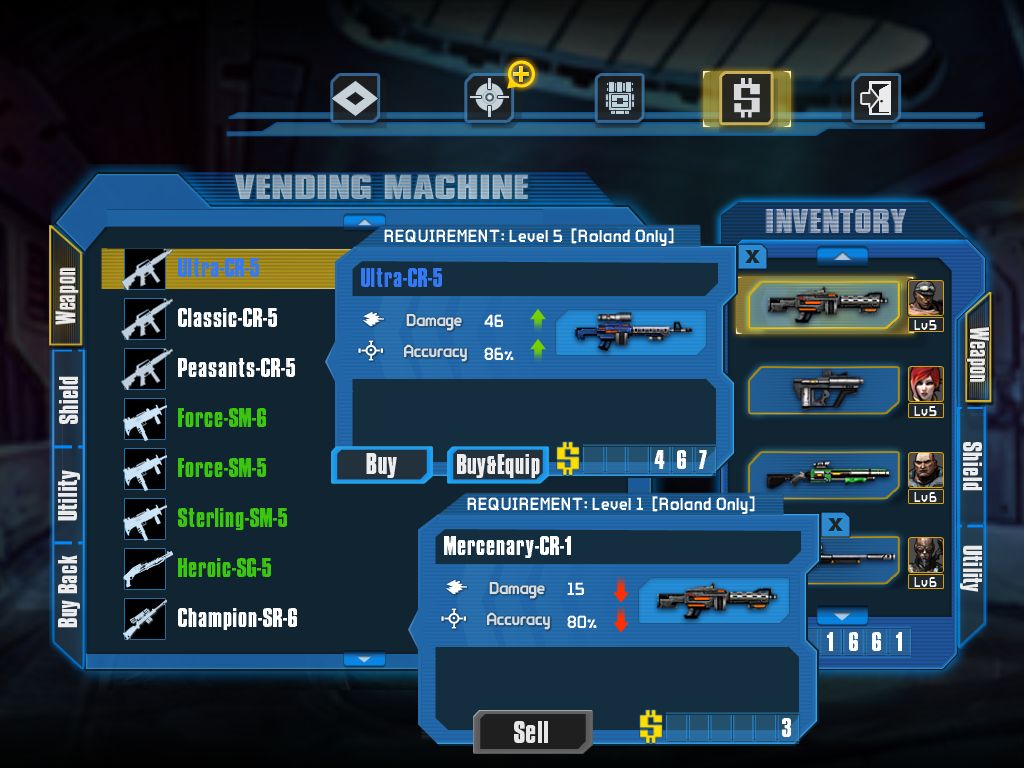 It would not be Borderlands without the ability to buy more and more absurd weapons, and Legends offers on that front as well. I only collected money during my shooty bits, but in transition screens between one set of enemy waves and another, I was frequently whisked away to Marcus’ shop where I could buy new gear. In Legends, the four party characters are restricted to the types of weapons they excelled with in the first game, so the shop does well to order weapons based on who you’re buying for at any given moment, and there are easy to use comparisons between what you have equipped and what the shop is offering. The desire to tinker with equips and find that gun that has just a couple more points of stats — those sweet, sweet green arrows! — remains strong, and there are thousands of randomly generated weapons of varying rarity.

While you’ll likely have all of your characters fully upgraded around level 35, enemies will continue to scale proportional to your level. Couple this with randomly generated levels and missions and you can theoretically play Borderlands Legends for ages, or at least until you get tired of slaughtering waves of things. The missions are contextualized with brief paragraphs telling you what to do, but they’re largely in disconnect and there’s no canonical link between Legends and the two console titles.

I enjoyed the almost clerical bits of outfitting my homies with the best equipment, and navigating through touch-based menus is a lot easier than dealing with the console games’ UI, but the idea of slaughtering wave after wave doesn’t have too much appeal to me. I suppose that in short bursts it could prove a decent distraction for big Borderlands fans, though you’ll likely want to turn the sound off to avoid repeated, shrill death screams. I also sort of appreciate the fact that Legends won’t be employing any sort of micro transactions; it launches next week for $4.99 on iPhone and $6.99 on iPad.