When Jim Sterling saw Binary Domain in action for the first time at E3, he covered most of what the game is about but felt like the game needed some special sauce to make it stand out in the crowd.

During an extensive look at the mechanics in Binary Domain at gamescom, we had the chance to get some deeper insight. However, I can’t help but share Jim’s sentiment about whether or not the game will have a chance in today’s crowded console market, even after learning more about what does set the squad-based shooter apart from others. 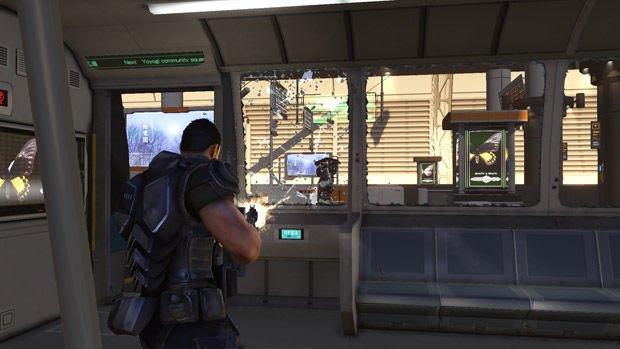 Tokyo, the year 2080. After decades of climate change, with rising sea levels as a result, and other shifts in Tokyo’s society, the city is now divided into a lower city and an upper city. Guess where the rich people live.

When so-called “halo children” appear — androids that think they are actually human (i.e., Artificial Intelligence) — and become something worth investigating for an elite international squad, it’s up to protagonist Dan Marshall to get on the job.

Binary Domain is a squad-based shooter that has cover, but I wouldn’t necessarily call it a cover-based shooter in the sense of Gears of War. You control Dan and assign commands to up to three squad members out of a total seven you’ll eventually be able to choose from, but these squad members won’t always follow your commands or even help you out. You need to gain their trust first. 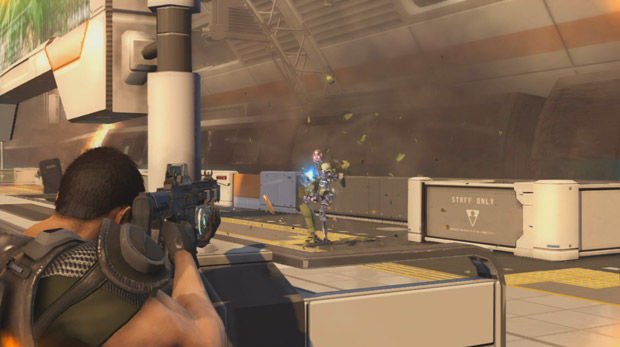 Shooting your way through robotic enemies that feature a procedural damage system — allowing you to shoot the heads off and make them shoot each other or to shoot parts off the armor until the bare skeletal bones remain — you can command squad mates to do things like attack, defend, or cover you.

Building trust will change the behavior of your AI allies. With low trust, squad members will flat out refuse to follow your orders from time to time, and they will just do what they want. If you get taken down and require a squad mate to use a medkit to get you back up, they might just ignore you until all enemies are taken care of; why would they bother risking their life to help you if they don’t trust you? 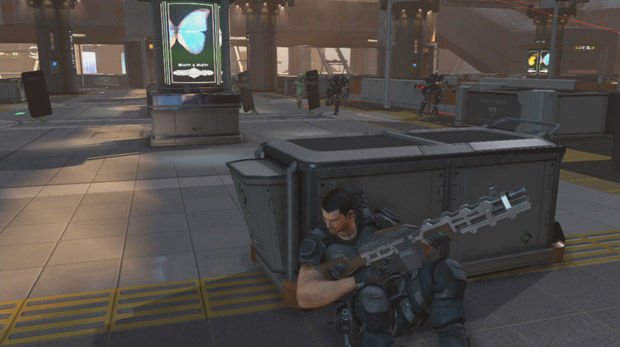 If you maximize your trust, snipers will tell you they will get rid of that sniper they spotted in the distance even before you saw there was one. Soldiers will cover you more effectively, and as a team you’ll fight your way through enemies that would take more time if you your squad members lost all trust in you.

You’ll be able to assign commands using the controller buttons, but you can also give commands using a voice recognition system. The fun part about this is that you can elicit easter-egg responses by messing around with voice commands. You can tell someone you love them, or that you hate them, and they’ll have a range of responses to react with.

The response you get also depends on whether you are in a combat situation or not. Compliment someone during combat who has just shot down a few enemies in a row, and they’ll appreciate it. If you tell someone you want to get in their pants while in combat, however, they will likely think that now is not the best time. 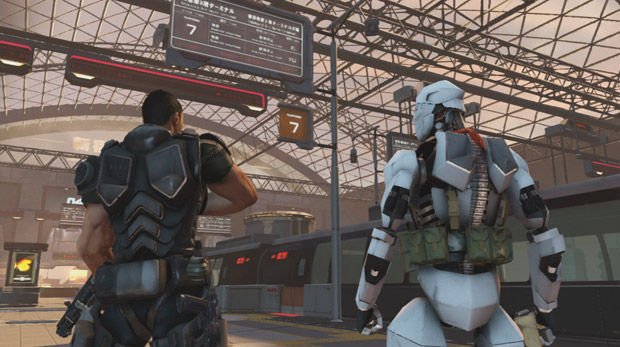 It’s an interesting idea that could be fun to play around with, but the question is whether you’d really keep using it throughout the game. The shooting mechanics looked pretty solid, but they were not very remarkable either. It doesn’t appear to play like Gears, perhaps being more akin to Vanquish without the sliding around and style that Platinum’s shooter had.

And that’s the thing. Binary Domain needs either a really good story or some great level design to make it interesting to play with the shooting mechanics as they look right now. Just having ok shooting doesn’t cut it anymore and after Shadows of the Damned‘s appalling initial sales, a game like this will need something more than interesting squad development to stand a chance.