Simulation fans have had quite a storied history of games to choose from. While the genre may seem homogenized to outside viewers, sim-nuts can’t get enough of the technical nuances of each title, and although they may look similar, it’s one of the most varied genres out there.

Although the Anno series was one of my go-to games, it wasn’t until Anno 2070 that I really became a fan. Two years later, Ubisoft Blue Byte is handling the all-new Anno Online, which seeks to marry the city-building genre with a persistent browser-based experience. It’s not everything an Anno fan would want, but I have a feeling that more casual simulation gamers will enjoy it. 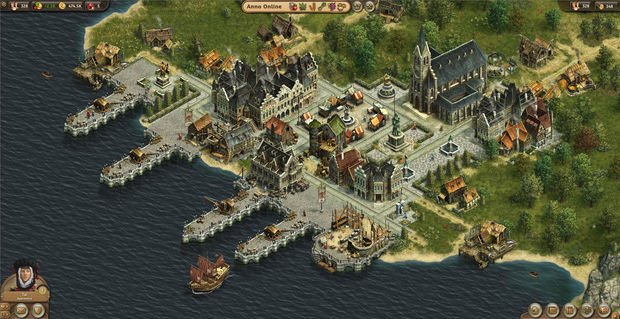 Anno Online is a browser-based game, which means you won’t download anything, and will play it directly from the web. As such, you could say it utilizes “always-on” DRM, which will probably scare a bunch of you off. On the flipside, it is free, and doesn’t force microtransactions down your throat every step of the way, even if it nudges you for them later on.

Anno Online will feature daily quests as well as a general questline, tasking you with typical city-building things like “attract 120 citizens,” or “acquire 120 wood stockpiles.” A robust but non-obtrusive tutorial serves to show you how to place buildings, and how locations of said buildings can influence production.

First you’ll start off with a humble settlement with a marketplace, a few houses, and a fisherman’s hut. Eventually, you’ll start to make your mark on the world as you juggle hundreds of settlements, inter-city trading, and general empire management. The interface is fairly simple, with your economy indicators housed on the top left, social features on the bottom left, and the bulk of your tools on the bottom right.

Somehow, the social element of recruiting friends seems more fitting in Anno Online than other games. It also has an optional chatroom available on a per-server basis, which is extremely helpful when you feel the need to ask questions — after all, everyone is working together for success. If you want both the friends list or chatroom to be hidden, you can do that. Right now it doesn’t look like there’s any annoying forced Facebook or Twitter integration, so the experience can be as isolated as you want. 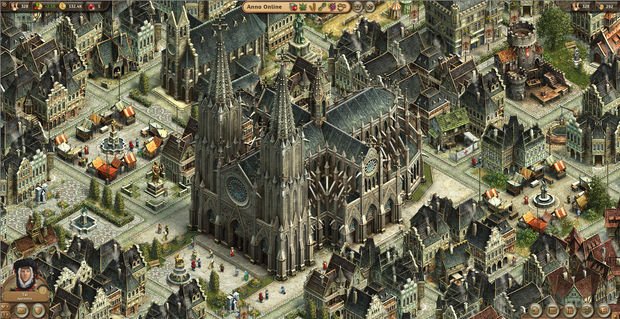 In line with most free-to-play experiences, there’s multiple forms of currency: in-game funds like lumber and stone, and real money funds called rubies. Just like any city-builder, all the in-game funds help expand your city as normal, and the rubies allow you to insta-buy more resources or upgrade buildings. You can earn rubies through questing and leveling up, but it offers diminishing returns as you progress.

Anno Online has a strict focus on peaceful city-building, as disasters and destruction have been turned off — so if you’re a more hardcore Anno fan, you may be left wanting for a bit more strategy. Alternatively, there are a ton of gamers out there who love simply city-building as a form of a zen garden, and turn off disasters anyways (some easy-going Sim City and Anno 2070 runs come to mind).

The world is persistent — so if you don’t manage your budget, go to sleep, and come back, you may find a lack of funds. Likewise if you kick ass at budgeting and increase your stockpile capacity through warehouses, you’ll come back to more resources than you’ll know what to do with. For the most part resources are constantly stockpiling, allowing you to play the game at basically any time, but exploring new territories do have a time-gate (around an hour or so until they open up).

The only major issue I’ve found so far is that after a number of days, things start to get stale as you fill your island(s), and wait for more resources to come in to progress into major transitions. Of course, that dirty word is involved with the project — microtransactions. Thankfully, they’re not really that intrusive, as you can play the vast majority of the game without them. For the most part, ponying up cash will just help facilitate faster construction and easier trade routes — two features you can also get for free with patience and careful planning. 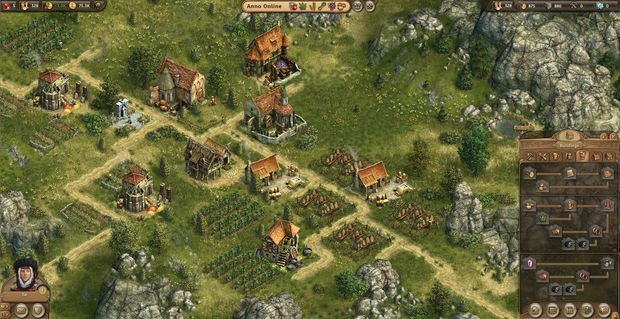 In the full game you can pay to earn more than six islands, but I’m nowhere near that point yet, even having extensively played the beta. There isn’t an “energy” (wait-wall) mechanic per se — progression is tied to how much your town produces. Still, you may feel the sting of waiting once you’ve progressed farther in the game, and I wish there were some sort of way to trade resources with other players to earn rubies to alleviate that.

An open beta test is planned later this year, and thankfully, the developers have announced that any progress through the closed or open beta will not be wiped. So far, Anno Online seems like a great alternative to the new Sim City. Although technically the new Anno has to be played online, the simple fact that it’s free puts it streets ahead of EA’s latest also online-only foray into the simulation market.