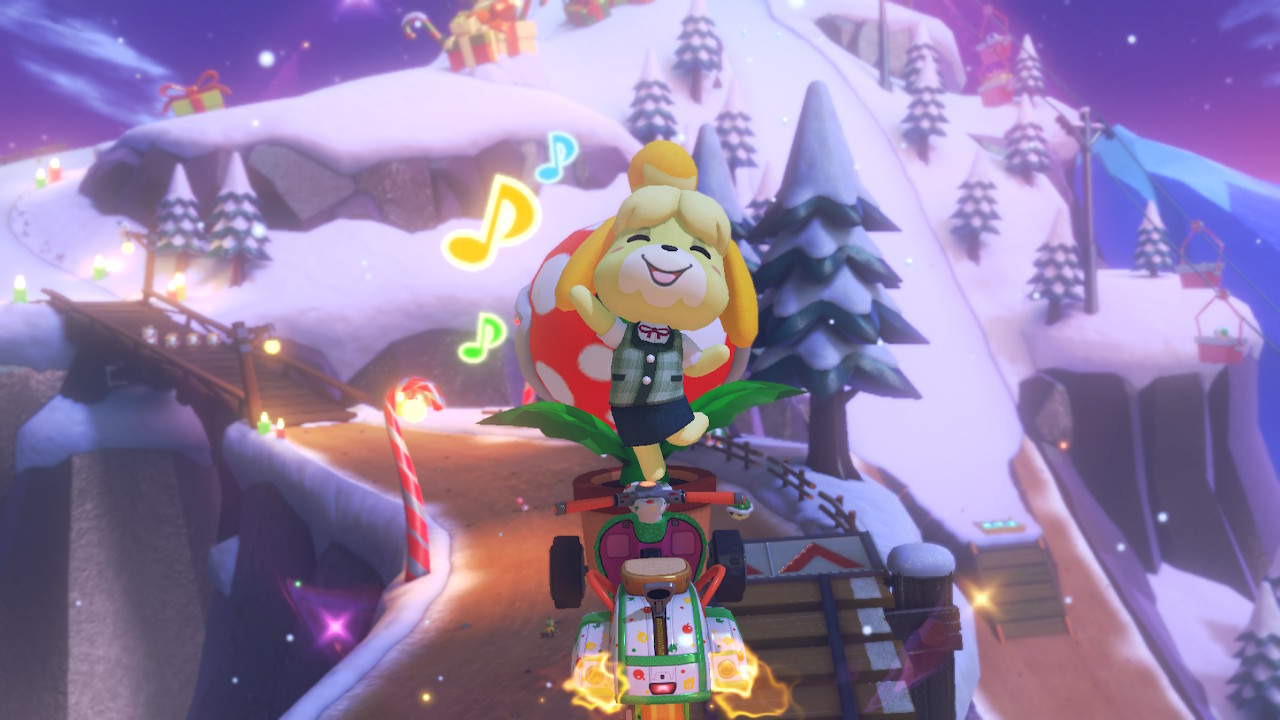 The third time really is the charm for the Mario Kart 8 Deluxe Booster Course Pass. After two perfectly fine, if not wildly amazing, track packs, Nintendo has managed to put together a wave of DLC that is eight tracks, zero skips, swear to God. Not only are these top-tier tracks from Mario Kart‘s past and present, but this is the first time the developers have really tried to lean into the gameplay innovations of Mario Kart 8, i.e., the anti-gravity mechanic. In revisiting these tracks, the developers have deftly added this feature where they can, even if it’s just for a moment. None of the tracks here follow the footsteps of Wave 2’s Sky-High Sundae, which was entirely anti-grav, but that’s okay. Because what’s here is fantastic and setting a high bar for the three remaining waves. As I have previously done with Waves 1 and 2, I’ve spent the past few days playing through the new collection of tracks for a ranking and review. Any thoughts of this being an easy list to make went right out the door when I realized the Rock Cup and Moon Cup are both bangers. It wasn’t too difficult for me to pick the #1 track of this Wave, but figuring out which track belonged at the bottom was far more difficult. That is, until I tested them all out in the Time Trials. One complaint that is lobbied at all the Mario Kart Tour city tracks that have found their way into the Booster Course Pass is that they’re too flat. And that’s not exactly a surprise. The real cities these tracks are apeing their scenery from aren’t necessarily known for their extreme hills and slopes. There’s a reason cities exist where they do in the world and the flatness of the land is a big part of it (unless you’re Seattle or San Francisco). But flatness isn’t London Loop’s biggest sin. In fact, the first few times I played it, I didn’t think there was anything wrong with it. The city is gorgeous and overflowing with familiar sights, from Tower Bridge to London Eye to Parliament. But when I took it into the Time Trials, I realized this track is way too long. Like the other city tracks pulled from Tour, London Loop combines three different routes from that game into one track. And as much as I love that concept and how the course is designed to get you to see everything the developers have shoved into this city, it feels like it goes on forever. 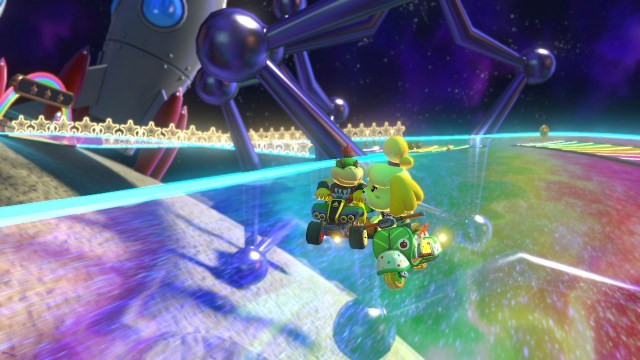 Where do we stand on the “one big track” design concept? I know when Mario Kart 7 debuted, a lot of people didn’t really care for them. And to their credit, Maka Wuhu and Wuhu Loop weren’t exactly engaging tracks. But I absolutely dug Rainbow Road in that game, and I think the track is even better here. Seeing this course on my Switch OLED screen really highlights the incredible design concept of racing around the solar system. The asteroid you land on is now an anti-gravity section, and taking this course into 200cc mode is a real test of your braking capabilities, particularly when you’re on the rings of Saturn. It’s just an all-around great track and arguably the best execution of the single-lap track concept…behind the three from Mario Kart 8 Deluxe that are much better. 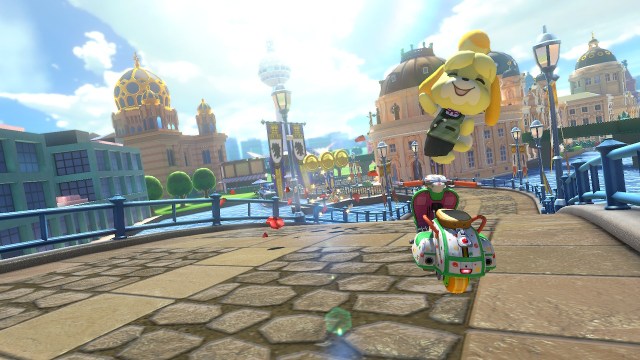 Berlin Byways is such an intricate track that it arguably could have been listed at the top of this list. Not only is it a wonderful tour of Berlin, with Whomps making up part of the Berlin Wall, but for the first time in any of these city courses, it’s a traffic track. As I wrote in my review of Wave 1, there is nothing I enjoy more than a good Mario Kart traffic track, and Berlin Byways is a remarkable one in its own right. Not only do you race with traffic, something that is quite tough when driving at 200cc, but you’re also forced to drive into oncoming traffic in the second and third laps. That section of the track is incredibly fun when racing against other players, but it’s far too short to achieve its full potential. Still, there are so many other small tidbits about Berlin Byways that place it above and beyond the rest of the cities we’ve raced through, whether it’s the inexplicable subway car you can drive through or the brief split path at Schiller Monument. It’ll be interesting to see if any of Mario Kart Tour‘s other city tracks will be able to top this one. Rock Rock Mountain is an unquestionable top-tier course from Mario Kart 7. Surely, that is why it was one of the first classic tracks to be introduced in Mario Kart Tour when it debuted during the inaugural New York Tour back in 2019. As a brilliant showcase of MK7’s glider mechanic, this is one of those great course designs that really get the most of the developer’s ideas and ambition. And with its introduction to Mario Kart 8 Deluxe, an anti-gravity section has been added to the slope climb in the final stretch of the track that helps it feel more in place with the design philosophy of this game. It may be a little addition, but it makes the difference and really highlights how tracks in previous Waves could have used the same extra bit of attention before making their debut in MK8D. 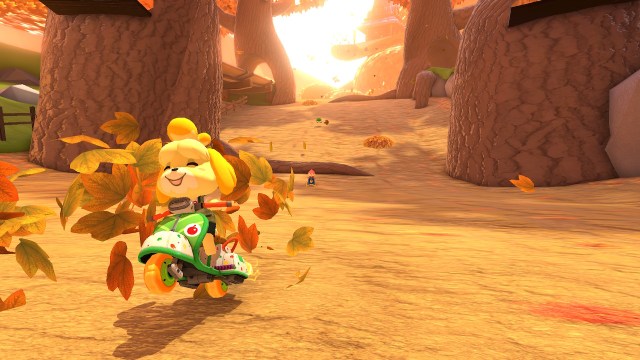 Going into Wave 3, I thought Maple Treeway would be the clear winner. After all, it’s one of my favorite tracks from Mario Kart Wii, and seeing its pumpkin spice-infused color palette always brings warmth to my heart. It’s still an amazing track, one that makes the most of its design concept as you race around the winding branches of autumn trees and knock your opponents into the wigglers that’ll give them a good stomp. The only reason it’s not any higher here is, well, I miss that bouncing net from the original version. I get that Mario Kart Wii didn’t have gliders and those were a pretty prominent part of Mario Kart 7, but sometimes the original design is still the best, and this is one track where I think that’s the case. 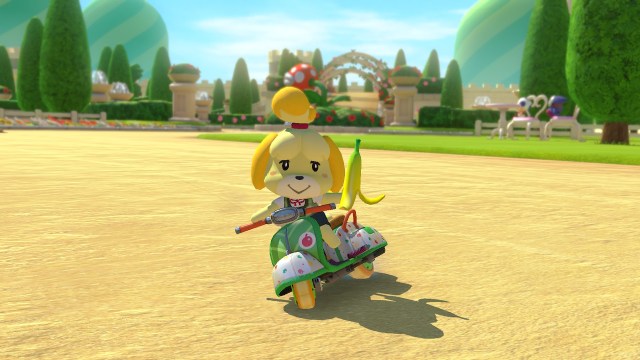 Before the arrival of Mario Kart 8, I long held the opinion that Mario Kart DS was the best game in the series. Not just for that single-player mission mode that I deeply miss, but the game had arguably the best tracks the series had ever seen. And Peach Gardens is a big reason why I held that opinion for so long. A beautiful race through the back of Peach’s castle, this was a great track back on the DS that has taken a cue from Mario Kart Tour with its appearance in the Booster Course Pass. The first two laps of Peach Gardens happen as you remember them, making your way around that giant square track with Chain Chomps patrolling its grounds. The final lap adds an extra section that hasn’t been there before, taking you to the left side of the castle and then sending you back down the track in the opposite direction. It’s an excellent way to freshen up this 17-year-old track and something Nintendo should consider doing to other retro tracks in future Mario Kart games. 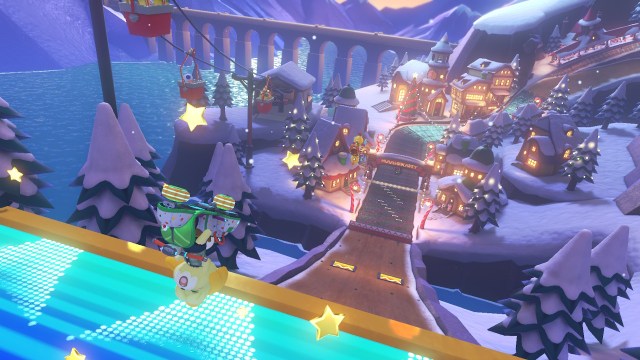 The first time I raced through Merry Mountain, I thought, “Wow, that was pretty short.” The second time I raced through it, I thought, “It’s still short, but those turns near the top of the mountain are pretty devilish.” I’ve now raced the track about 28 times, and while its brevity is too damn short for its own good, it’s a brilliant track with a sense of verticality that is missing in most of the other DLC tracks. It’s also arguably the most beautiful track of the Booster Course Pass so far. The lighting and textures here are a step above everything else we’ve seen from the DLC, and the sleigh train that circles the track dropping coins is a lovely touch with its whole Christmas theme. As for the track design itself, it’s an exceptional race up and down a mountain with an anti-gravity section that makes perfect sense and plenty of opportunities for little boosts that can come back to bite you if you’re not careful about it. Let me just say Slipstreaming is not your friend for parts of this track. I absolutely adore Merry Mountain, and I hope Nintendo continues to explore more holiday-themed tracks in the future. 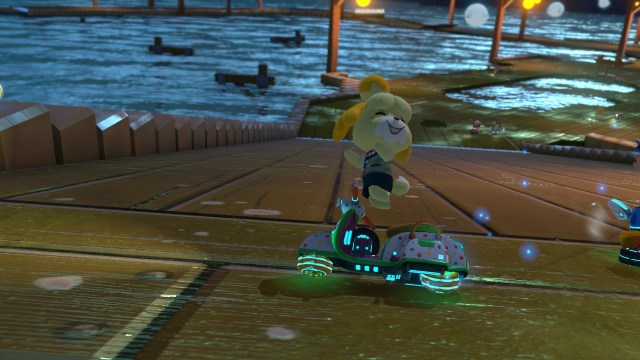 Boo Lake might be something of a controversial choice for the #1 spot on this list, but I think this is a phenomenal track. When it comes to bringing in courses from Super Mario Kart or Mario Kart: Super Circuit to Mario Kart Tour and the Booster Course Pass, the developers have generally gone about it in two different ways: completely remake the track with a 3D design (Sky Garden) or keep it as flat as it’s always been (Mario Circuit 4). Boo Lake splits the difference, creating a track that starts flat before breaking it up and taking the racers underwater. It’s a stellar compromise between the two design ideas, and with the entire underwater section being anti-gravity, this course feels right at home with the original tracks of Mario Kart 8 Deluxe. Also, it’s just nice to finally see the lake at Boo Lake, considering the GBA couldn’t actually render it.