I slay at home when I work out

We’re about a month away from the start of “Seasons Eatings,” that time of year when people stuff their faces with candy, cookies, turkey, ham, mashed potatoes, and an assortment of festive baked goods. It’s usually the time of year I pause whatever diet I’m on because, well, I literally have no self-control. But stopping any healthy eating habits I’m currently engaging with may not be an option this year. The increasingly disappointed look in my mother’s eyes when she sees her son is still a porker is really starting to get to me.

If anything, this needs to be the time of year I increase the number of weight-loss strategies I’m actively utilizing. I need to not just count calories, but really get my butt moving with some exercise. And Knockout Home Fitness is a good way to do just that, provided it doesn’t injure me first. 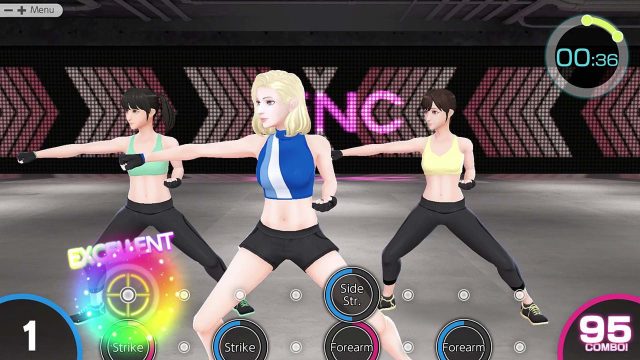 Knockout Home Fitness is a relatively simple package. Starting it up, you’ll create a profile with your height and weight before it throws you into a quick beginner’s exercise routine to give you an idea of what the game will be like. As has been advertised, this is more than just a boxing game with exercises taking influence from various disciplines of martial arts like karate and Muay Thai. You’re going to be doing a lot of crouching and kicking here, but if you have lower body issues, just know the game doesn’t track leg movements unless your arms are also somehow involved, like with the knee motion.

After that first exercise, you’ll gain access to the two main modes of Knockout Home Fitness. The first is your daily Personal Training. You can only do this once a day in either 10, 20, or 30-minute intervals (though they always last longer than advertised when you take stretching into consideration). Before you start your session each day, you can toggle the training settings to focus on different parts of your body as well as what your fitness goals are, such as to lose weight or gain strength. Your trainer will use these settings to create a regimen for you consisting of a handful of the 60 available different exercise routines, which fall into one of five categories: Warm Up, Boxing, Kickboxing, Challenge, or Fight.

Once you get into a workout, the actions will appear on a bar on the bottom of the screen that you’re expected to perform in time to the beat. Knockout Home Fitness is very forgiving in this regard. It often gave me top ratings for my punches, even if they hit just offbeat. The motions are color-coded, with left-hand actions appearing in neon blue and right-hand actions appearing in neon red, which perfectly match the color scheme of my Neon Joy-Con. That made it somewhat easier for me to keep track of what I was doing because the chosen method in which the actions scroll isn’t as intuitive as I imagine was intended. It certainly makes it all-but-unplayable in tabletop mode.

Outside of your daily Personal Training, you can engage in any of the 60 routines you’ve unlocked individually for further exercise. There is no limit on how many times you can do these per day, and while the mode is called 3-Minute Fitness, know that these routines can take up to five minutes each.

If you are a person who is always short on time or needs to fit exercise into their schedule throughout the day, it’s actually a pretty attractive package. You can boot it up, knock out a full-body workout in less than a half-hour, and then go about your day. I got into the habit of doing my trainer-led workouts in the morning and then hitting a few of the short routines during my lunch break and just after work. This kept me active throughout the day, which I can tell my body appreciated.

As nicely as Knockout Home Fitness fits into my schedule, it really doesn’t take long to see how barebones of a package this is. There are just four trainers at your disposal and a couple of gym locations to choose from. The music selection is more robust in comparison, but unlike the Fitness Boxing series, there isn’t a huge emphasis on music here, so don’t expect any instrumental-only versions of Top 40 hits.

What’s really missing from this package, though, are options. Specifically, low-intensity options or routines that go at a slower pace. This is a workout game that expects you to hit the ground running as if it were designed for people who are already in shape and looking to maintain rather than those who are just starting their fitness journeys. The almost sarcastically named “Warm Up” exercises wore me out in my first two weeks, asking me to throw punches, kicks, and blocks at a cartoonish pace. The trainer on the screen always looked poised during the workout, but I can only imagine I looked like a buffoon just flailing my arms about trying to keep up. 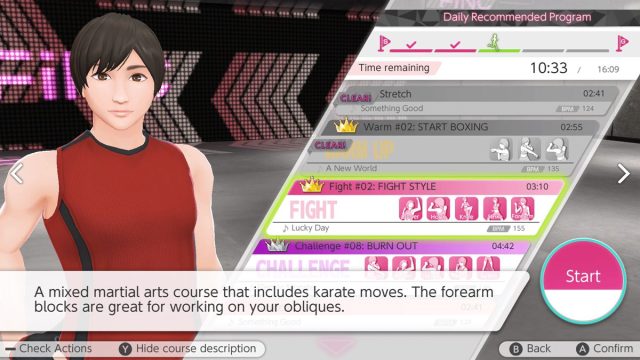 It does get easier, but I will admit I didn’t come into Knockout Home Fitness from square one. I was a bit more active in my life than I had been prior to starting past Switch exercise games. Make no mistake, it did very much kick my ass for the first few weeks, but now I’m more or less able to comfortably keep up with all the training routines.

Had I come into this game more out of shape than I was when I started, I don’t know if that would still be true. The speed and intensity at which it asks you to perform can be extremely taxing on an out-of-shape body. As all fitness games do, this one opens up with a disclaimer to consult your doctor before starting an exercise routine. After about four days, it became the first fitness game I’ve played where I actually considered doing that because of how hard it was driving me.

Ultimately, the only thing that really matters here is determining whether or not Knockout Home Fitness is effective. As is the case with almost every other exercise game, it is. If you stick with it and get those daily stamps, you should be able to notice it making a difference whether you’re working out for 15 minutes a day or an hour. It’s certainly made a difference in my life, but I want to stress this game is not here to hold your hand. It sets a quick pace and expects you to keep up. If you need an exercise game that is a bit more amicable to the beginnings of a fitness journey, you may want to look elsewhere.