We don’t need no stinkin’ gym 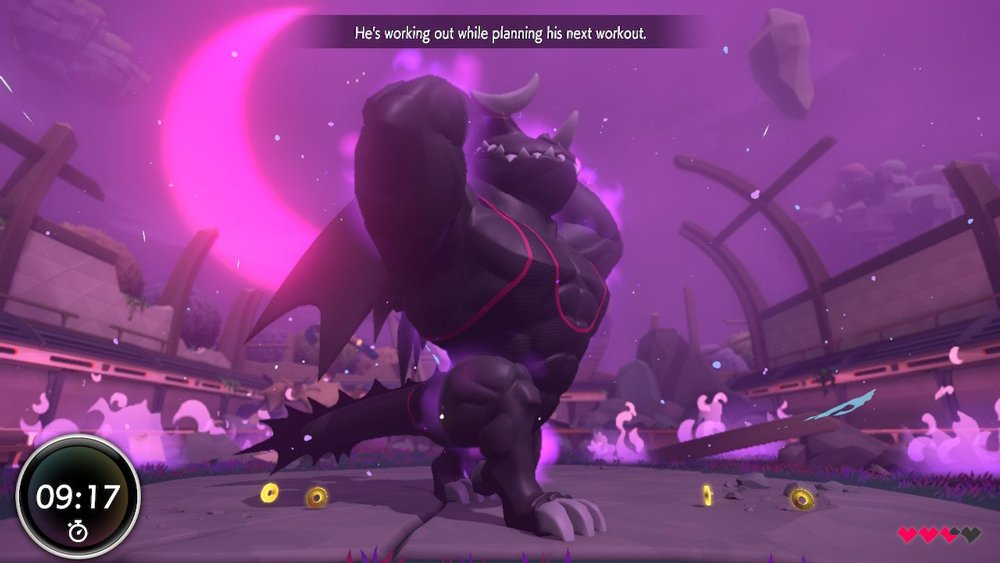 My road to physical fitness has had more twists and turns than Lombard Street. Every time I think I’m going in the right direction, something pulls me the other way. Depression, a change in living situation or employment, failing after going down to Hollywood thinking I’ll make it big as a screenwriter, and sudden allergic reaction to most laundry detergents have all, at one point, decimated the progress I’d made at eating right and exercising. It’s been a 20-year journey for me, and finally, there is an exercise game that treats physical fitness as a journey.

Ring Fit Adventure is what Wii Fit failed to be. While incredibly popular and quite fun — boxing was a personal favorite of mine — the actual game was basically one of those exercise list posters you see at the gym. It told you what you can do, but not what you should do and all the inspiration to get fit had to come from within. Ring Fit Adventure goes in a different direction. While you can still make your own workout routines from an extensive list of 60 different exercises, the motivation it provides is something all gamers will be familiar with: beating the final boss.

The story of Ring Fit Adventure‘s adventure mode has you teaming up with the cleverly named Ring as he attempts to stop his former protégé Dragaux. The quest is split up between dozens of levels across multiple worlds. Before you start each session, you’re given the option to warm up with some stretching. Doing so will add to your XP. Gaining as more XP unlocks more exercises for the mode. How do you gain XP? By working your butt off.

Ring Fit Adventure starts players off easy with light exercises meant to shake the cobwebs out. After strapping the left Joy-Con to your leg and inserting the right one into the Ring-Con, you’ll start off with some running in place down a long and winding path, across bridges, and through temples of this mythical world. The art direction here is quite enjoyable and seeing the wildlife running alongside you has a Mutual of Omaha Wild Kingdom sensation about it. Players are allowed to run at their own speed for most of each level, though there are certain points where speed or high-stepping is required for short bursts.

As players run in place, they’ll hold the Ring-Con in front of them and use it to fire wind gusts at boxes by squeezing it and suck in coins by pulling on both sides. As you progress further through this world, you’ll encounter obstacles on your path that will require more varied player action, such as fans you need to activate and paddle boards you need press forward. The Ring-Con and leg strap both do an excellent job of tracking player motion. Not only does my character avatar match the type of running I’m doing, but his body will turn as mine does when I move the Joy-Con from side to side. I know the Switch is praised mostly for its ability to be both a handheld and a console system, but I’m really starting to think the extensive capabilities of the Joy-Con controller is actually the more impressive part of the hardware.

The Ring-Con is comfortable to hold for long periods of time and has a good amount of resistance. The leg strap, reminiscent of the one that came with EA Sports Active NFL Training Camp, did tend to slide down my leg when I put it over my shorts. Under my shorts, it holds tight to my leg and there doesn’t appear to be much issue with the game tracking its movement under a thick piece of fabric. 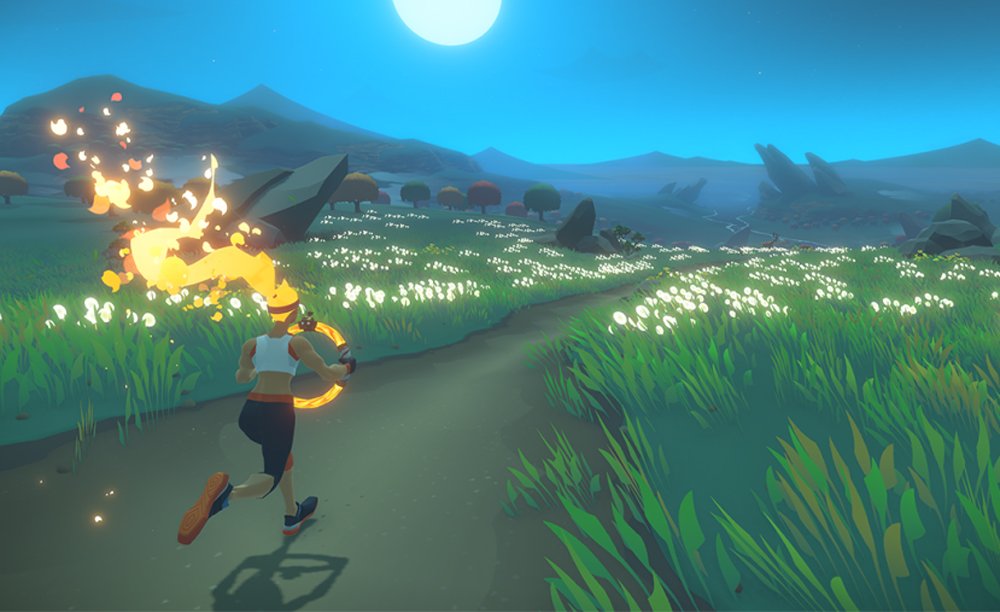 As you run through levels, collecting coins, high-stepping through swamps, and pointing the Ring-Con down and squeezing to make your character jump, you’ll eventually run into a monster or group of monsters. These turn-based battles use exercise as your attacks and you actually need to pay attention to not only the exercise you’re using, but what its attack capabilities are. Some exercises can strike multiple monsters at once, something you need to keep in mind as the number of hearts you have is limited.

When it is your turn to attack, you select from the available exercises you’ve access to and perform the corresponding activity. This can be squats, lunges, yoga poses, and various ways of squeezing, stretching, or just moving around the Ring-Con. Each exercise will have an onscreen prompt to make sure you’re doing it right. The right Joy-Con will vibrate when you’re doing an exercise correctly and you’ll do more damage to your opponents with a properly performed rep. Once you defeat your foe or foes, it’s back to running until you hit another enemy or the end of the stage where you go into your victory pose.

It’s the switch up from running in place to performing these exercise reps that makes this mode so addictive as a means of exercise. Pushing myself to run fast for minutes at a time, then taking a “break” with some strength-training battles keeps me from getting too exhausted too quickly. And while my journey through each level is guided by a set path, my actions in battle are all up to me. That may sound desirable, but it’s actually one of the downsides to how the adventure mode was designed. 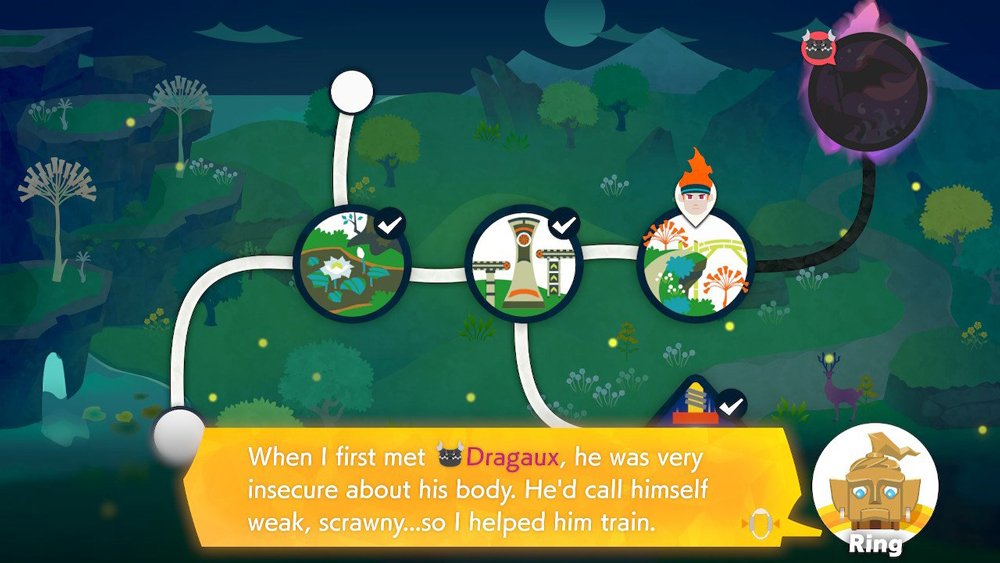 As you level up, you unlock more exercises. I enjoy some exercises more than others, like squats and lunges. There are exercises I don’t much like at all, specifically those that ask me to sit on the floor (Pro Tip: If you have hardwood floors, get an exercise or yoga mat for these activities.). Leaving it up to players to pick and choose which exercises they want to do could create a situation where they’re not working the parts of their bodies that need working. It would be a much more effective workout if players have to engage in exercises they may not necessarily enjoy. Color coding attacks, where specific color exercises do damage to enemies of the same color, alleviates this issue a bit but you still can completely avoid physically worthwhile exercises that just aren’t your cup of tea.

There are some odd design decisions with the adventure mode. For starters, if you for some reason fail at a battle, you go back to the beginning of the level. There’s no fanfare to it and when it happened I wasn’t sure if the game counted any of the calories I burned during my attempt. A far larger issue has to do with beating monsters. Eliminating enemies with exercise is a great game mechanic, but if you down a foe while you’re in the middle of your exercise — like you smash a critter three reps into your set — it just stops. You don’t continue to the end of your reps, which feels counterintuitive to a game designed to encourage exercise.

Also counterintuitive to that is how often Ring Fit Adventure feels the need to give players an out. Early on, it felt like every two levels the game was asking if I wanted to hang it up for the day. I didn’t and pressed on, but I could see players taking that chance to quit. And this could be after as little as 10 minutes of exercising, which might leave me out of breath but certainly isn’t enough time to adequately push me toward my fitness goals.

Outside of the adventure mode, there are a few more options for exercising. You can use the Ring-Con when not playing the game, such as when you’re watching TV or Twitch, and it will track up to 500 squeezes or pulls of the device as long as you have a Joy-Con plugged into it. There is also a custom mode where you can combine exercises into your own personal routine, or choose from a small selection of those created by Nintendo. Finally, there is a mini-game mode that has a wide variety of quick exercises, games, and routines that I actually found useful to start with as a way to loosen up my body. And no matter which mode you choose, your calorie count is tracked so you can see just how much you’ve burned over the days/weeks/months you choose to engage with the game. 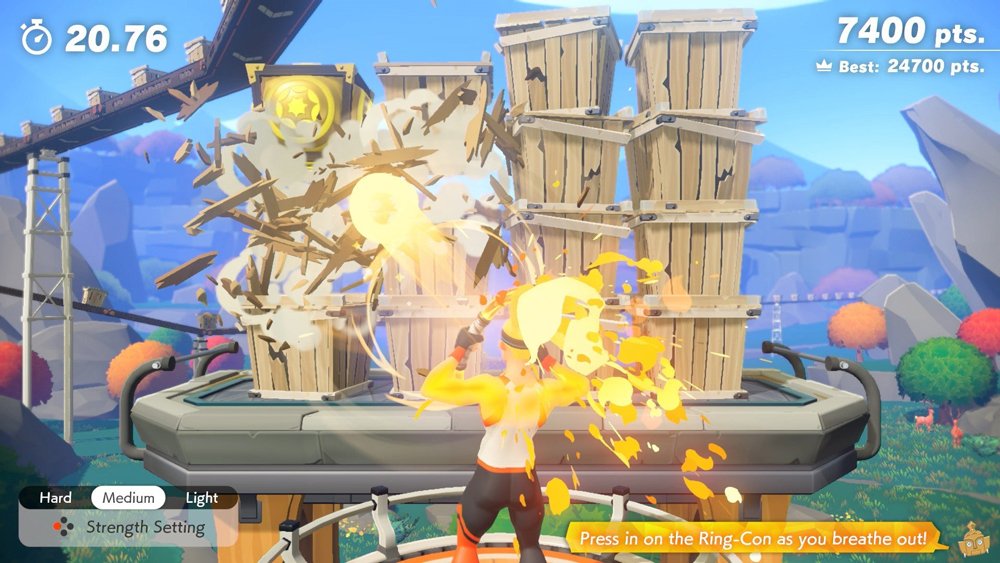 If you’re wondering about options, the game has a few players might be interested in. There is Quiet Mode, which replaces running in place with bouncing in place so you disturb people around you far less. You can adjust the difficulty of the adventure mode to your liking. You can also pause the game at any time, take a breather, get some water, and then start it up again when you’re ready.

Adventure mode also has an assist feature you can activate on your player profile to remove certain activities from the journey. For instance, if you have bad knees or are in a wheelchair, you can turn on knee assist and the game won’t require you to run or bounce in place through each level. It also won’t ask you to do exercises that work the lower body, such as squats, and it replaces your end-level victory pose with a button press. If you use any of the assist modes available I would refrain from doing the heart rate check at the end of each level as it might be discouraging.

Two weeks of a workout regiment is not nearly long enough to give a full assessment of how effective it is, but it is enough time to see that Ring Fit Adventure is one well-crafted exercise game. Will it be good enough to help me overcome this lifelong struggle? Ask me again in a month and then five months after that.