With the triumphant return of Full Metal Panic! in the form of Invisible Victory, we were also given a standalone game that seemed like a match made in heaven. The development team of the Super Robot Wars games, which have featured the series before, able to focus on just one show? Surely this would be the game Full Metal Panic! fans have been waiting for.

Oh boy did that hope turn out to be completely wrong. 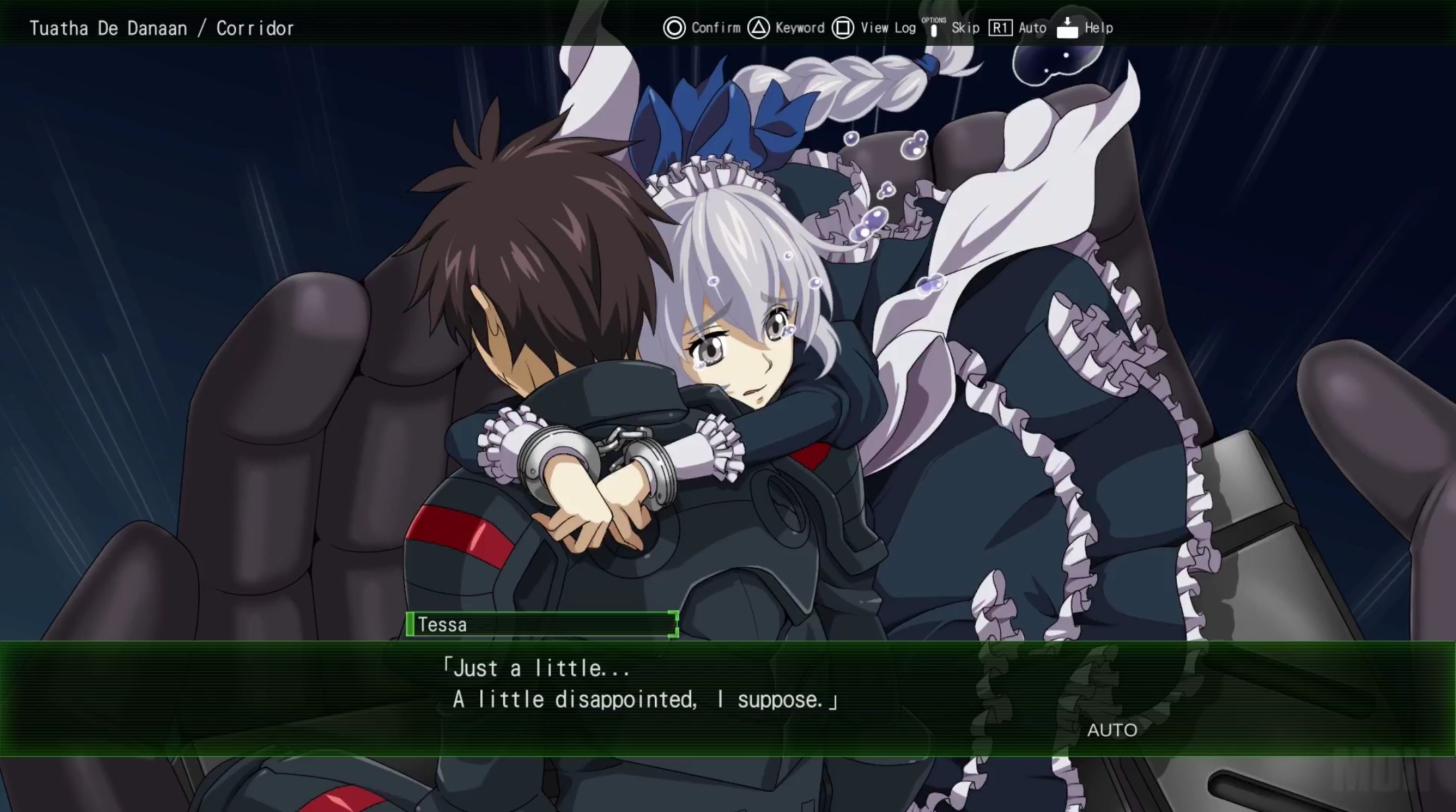 So, let’s start off with what material the game is adapting. If you’ve seen the previous seasons of Full Metal Panic! or read the original material, enjoy the currently airing Invisible Victory, and are ok with a straight adaptation, then congratulations. The story that the game follows is for you. If you’ve never touched anything Full Metal Panic! before or do not like the current season, then this is not for you.

The game hits the ground running, immediately getting into the events of Invisible Victory, and will leave newcomers in the dust. While it does cover the first season up to the Arbalest’s first deployment in four optional tutorial missions, that’s it. Those events and The Second Raid are barely touched upon, and Fumoffu is not acknowledged except for a gag ending. It is incredibly hard to get into and follow if you are not up to date or do not remember what happened, as many emotional beats hinge on knowing the relationships and experiences shared between the cast members.

As you would expect, the game plays extremely similar to the Super Robot Wars series. The overall stats of a unit are determined by the pilot and their machine, with each side bringing their own contribution. The mechs, also known as Arm Slaves, are upgradeable, have items assigned to them, and can freely interchange weapons with different stats. The pilots on the other hand gain levels like normal and have access to a skill tree. All the skill trees contain the same items however, with only Sousuke having a unique one that gives +2 to all stats with each level, so everyone turns out the same in the end.

Now there are some limitations. Throughout the game you’ll only have the four party members to customize: Sousuke, Mao, Kurz, and Clouseau. You will receive a group of Arm Slaves to swap them through, but they will often be locked as per the mission requirements. Even when they are open, only Sousuke can use certain machines due to story requirements. These machines have the Lambda Driver mechanic, a once-per-stage buff that allows him to act three times in a row, provides an overall stat increase, and temporarily unlocks special attacks. As a result of these unique benefits and numerous Sousuke-only missions, he will be your best unit by far.

Gameplay during missions is also similar to the Super Robot Wars series, bringing in elements from older games as well. Units can move within a set radius, attack an enemy within range, call in a missile strike, or resupply if they have the ability and the level permits, or just end their turn. This is important as in this game, the turn order is by individual units rather than by teams. The action you take, how high the unit’s agility stat is, if they’ve abandoned any weapons since the start of the mission — all of these determine how soon the unit will be able to act again, making it a little more dynamic.

There is another returning feature, and that’s limb health. All mechs have their health divided into four categories: Head, body, arms, legs. Attacking each limb has different advantages. Damaging the head for instance reduces the accuracy and evasion of a unit, while damaging the arms reduced the damage they deal. However, a limb is permanently broken once it drops to zero, and a unit is destroyed if the body reaches zero.

The introduction of limb health changes how weapons work. Grenades, for instance, do flat damage to all limbs. Rapid-firing weapons like machine guns do a random number of shots that do random damage to the still-intact limbs. Meanwhile, precision weapons like sniper rifles target only one limb. While this is all good in theory, the problem is single-target weapons still have a chance to instead hit a limb you didn’t originally target and weapons like machine guns do not necessarily hit every limb. If the dice roll is not on your side, enemies can feel way more durable than they actually are. In addition, bosses in the late game are too dangerous to attempt to break anything other than the body, including the final boss.

After you complete the game, you have some extra content, but that’s not saying much. You’ll be given an item, a unique weapon for the Arbalest, and have your money and skill points refunded for new game plus. In new game plus everything is mostly the same, except at key points you’ll be given a choice that wasn’t previously there. Choosing the second option will trigger one of the alternate endings, which include some fun scenes for fans of Bonta-kun and Tessa. However, these endings do not unlock additional content, meaning Bonta-kun, who is a normally playable when Full Metal Panic! is featured in a game, is not playable in any regard. 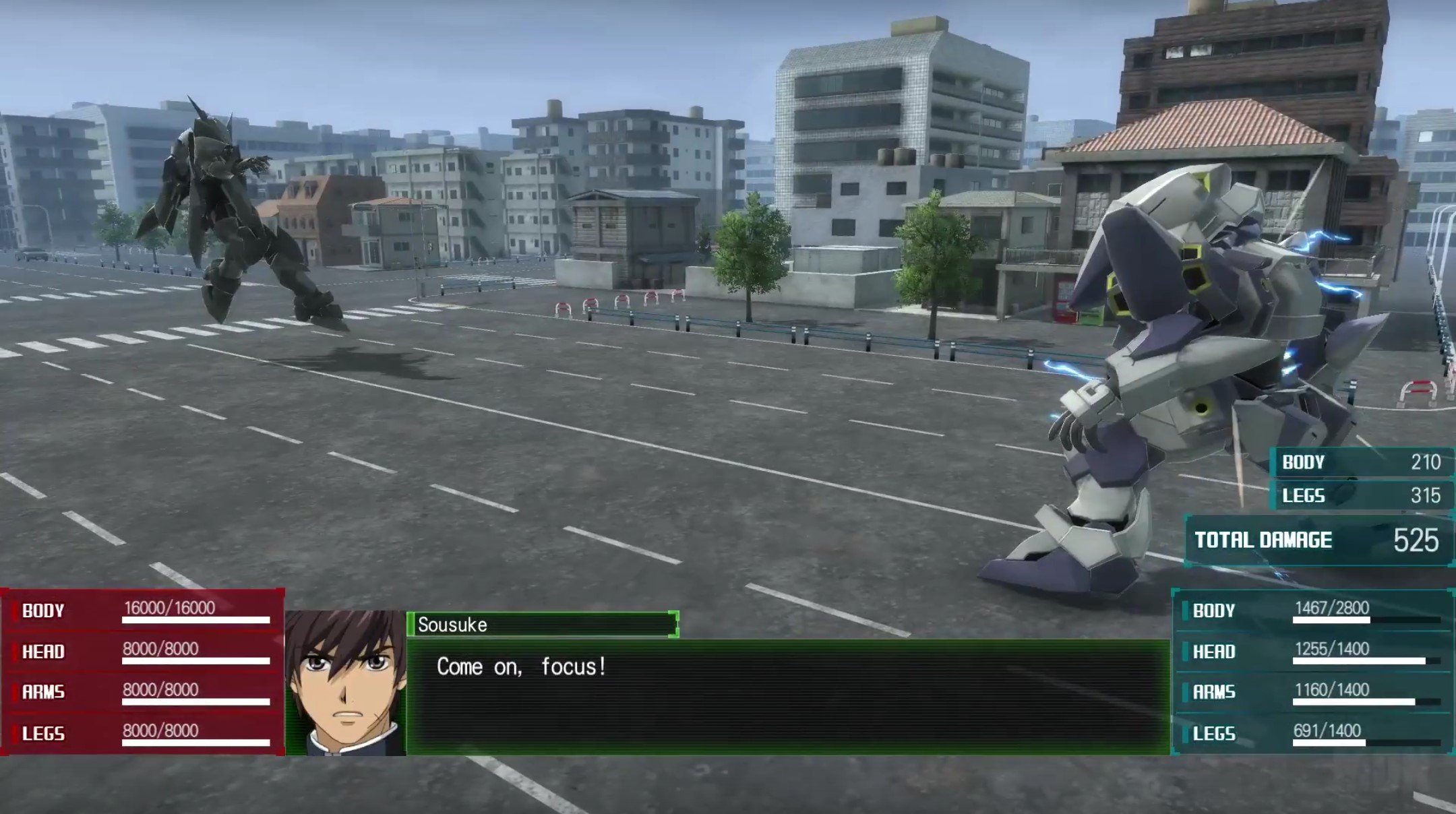 There are much larger issues than a non-playable mascot however. The game runs on the Unity engine and oh boy does it feel like your stereotypical one. While the models for the mechs and character portraits are nice and clean, the same cannot be said for the environments or menus. These feel like they’ve been quickly thrown together in order to be out alongside the latest season, and are incredibly bland and dull. The menus are a major downgrade from Super Robot Wars at many times. Where one could quickly tab between units to perform upgrades and changes, they must now manually back out all the way; the objective screen during missions is hidden in the system options menu; and, in some cases, the user interface stretches outside of the screen with no way to fix this.

A lot of quality-of-life features from Super Robot Wars are missing here. The ability to freely set background tracks is gone, as is the the option to speed up battle animations or have a classic-style battle screen. In the endgame, every pilot and machine feels the same, and the morale mechanic has little to no use if the pilot is not Sosuke. The ability to pick a weapon after choosing an attack isn’t there, requiring you to back out, and weapons don’t specify how they do damage, or if they can be used post-movement, until you use them.

There is also a massive increase in difficulty once you reach the final five missions, rendering Kurz, Mao, and Clouseau near unusable without large amounts of grinding. Even Sousuke will struggle if you’ve gone through the game as intended, and I found that despite grinding and a five-level advantage, it was still a struggle against the final boss. As a result, going into the final boss without the Heavy Strike skill, which increases damage dealt, and trying to focus anything other than the body will result in failure.

Which brings us to the biggest problem: some of the abilities unlocked via the skill tree do not work. The most infamous of these is Iron Will, which is supposed to reduce damage until your next turn by a set percentage. When it’s at max level it is supposed to reduce damage by 100%. Except Iron Will does not reduce damage at all, regardless of the upgrade level. It is straight-up broken, and that is unacceptable given how much damage the bosses in the final stages can do.

It’s hard to give Fight! Who Dares Wins a recommendation to anyone. The focus on a specific arc makes it hard for newcomers of the franchise to get into and fully enjoy, while the numerous issues, both major and minor, will get in the way of a normal fan’s enjoyment. If you’re looking to play a game with the content of Invisible Victory, just give this a pass and go get Super Robot Wars V instead. At least that game has Bonta-kun in it.