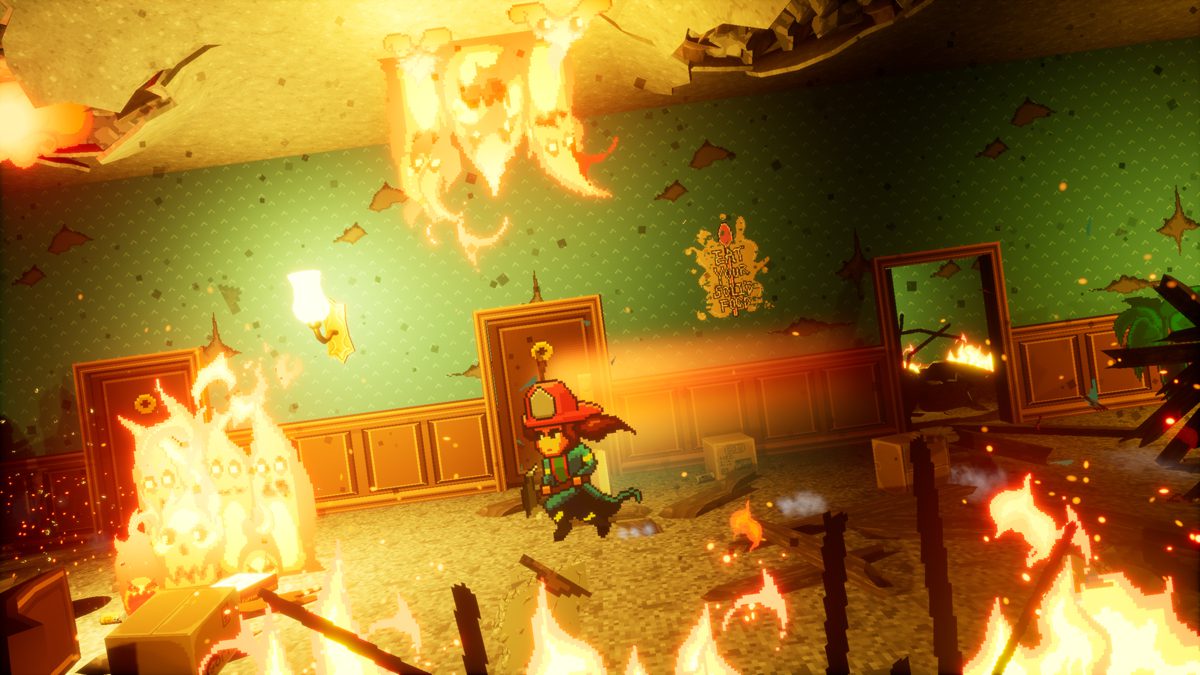 Like a lot of the Destructoid staff, I was immediately smitten with Firegirl: Hack ’n Splash Rescue when its debut trailer dropped during last year’s endless summer of streams. The cute protagonist, fun concept, and clashing art direction cemented the game into my memory. I knew I’d have to play it as soon as I could but with a mid-December release date, end-of-the-year articles and holiday travels took precedent, and I couldn’t get a review up for launch.

On the bright side, I have been able to see how this game has changed over the past four weeks with each and every update that’s been implemented. And let me tell you, it’s changed quite a bit since its debut. Set in a city besieged by arson, Firegirl: Hack ’n Splash Rescue tells the story of the titular Firegirl as she sets out to follow in her father’s footsteps and get to the bottom of whatever it is that keeps setting all these buildings ablaze. Armed with an ax and a hose, Firegirl will face danger head-on as she runs into burning buildings, trains, and forests to rescue the people and pets trapped within. With her ax, she can knock down doors and barriers to access new areas of the fire scene. With her hose, she can extinguish the blazes all around her or fly to extraordinary heights — provided she has enough water in her tank. Putting out the flames is important, but the real goal here is to rescue anyone who needs her help escaping.

With each successful mission, Firegirl will bag cash she can use to improve her equipment. Some of the people she rescues will join up with her brigade, providing a host of upgrades that’ll turn her into an unstoppable firefighting machine. The basic gameplay loop of running a mission and spending your winnings is only occasionally broken up by a few story segments that dig into the lore surrounding Firegirl’s father and the flaming creatures that are turning this city to ash.

Missions will occur in just a handful of different locations, so expect to see a lot of the same scenery as you fight the flames. The trains and forests you’ll venture to are pretty basic in their layouts, but the buildings you’ll burst into are labyrinthine by design. Rooms will often have multiple doors Firegirl can knock down with her ax, and the further you get into the game, the more elements are added to these missions that can make it easy to get lost. Your commander will let you know when you’re near a citizen needing rescuing, but beyond that, you’re kind of on your own.

Here is the rub: every mission you embark on in this game is procedurally generated. That means players are at the mercy of the algorithm. And it’s clear that this is where the most work needs to be done. To the developer’s credit, there have been four updates to the game since it first launched, including the third update on December 21 that rewrote the code to several key aspects of these missions. However, these updates haven’t improved the game to where I’d consider it good, but rather altered the reasoning I find it to be just alright.

When Firegirl first launched, it was, arguably, too difficult. Go back and read some of the reviews that came out around its release. You should notice a thread throughout them about how the game is too punishing in its early hours when you haven’t unlocked enough upgrades to really give you a fighting chance. There wasn’t any one reason for this difficulty, but rather a load of smaller issues that resulted in a lot of failed rescue attempts and a defeated spirit.

For me, Firegirl‘s biggest problem at launch was that it required me to be both extremely expedient and extremely cautious making my way through these missions. Three minutes on the clock goes by in a flash and with additional time credits sparsely distributed throughout these burning buildings, I couldn’t lallygag or really get a bearing on my surroundings lest I run out of time and fail the mission. I also couldn’t speed my way through these rescue attempts. With the placement of enemies, Firegirl’s slippery movements, and some questionable hit detection, taking damage was way too common in the launch version of the game. After four hits, the mission is over and I’m stuck with a hospital bill. 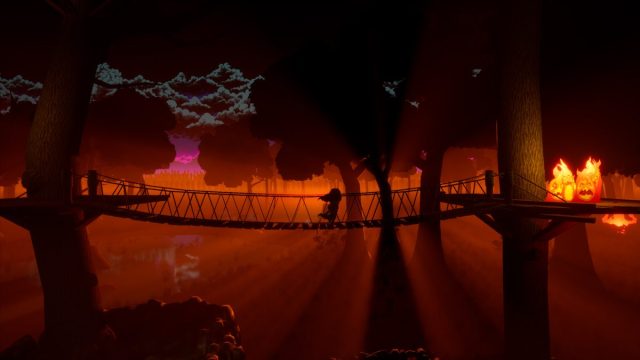 As frustrating as all that was to deal with, it was exciting. Throwing caution to the wind and running straight into a burning building as fast as you can searching for trapped cats and people is pretty exhilarating. Sure, I failed a lot of unfairly designed missions, but just like with rubber-banding in Mario Kart, the unfair nature of the game made it all that more intense.

Unfortunately, with the December 21 update, that intensity is gone. What was once a nailbiting race against time through nearly impossible hallways of flames is a more timid experience. Arguably, one could say Firegirl is now more “player-friendly,” with changes made to the specific coding that dictates both the layout of these missions and enemy placement. For newcomers, these changes will make it so you don’t continuously feel like a loser right out the gate. But, as somebody who has been playing since launch, it’s a bit boring now compared to what it once was. Further changes to how money is earned and spent have continued to dilute the experience, and I can’t help but feel the developers have taken all that feedback to heart, only to swing way too far in the opposite direction. It’s still kind of fun to go through these fiery hellholes, but it just isn’t as gripping as it once was.

This is, of course, the risk you run when you leave level and mission design up to procedural generation. You can’t guarantee the results like you could with handcrafted creations, so all you can do is tinker with the algorithm and hope for the best. Right now, Dejima Games is having trouble finding that sweet spot between Firegirl’s initial release and everything following the third update; a game that is intense but not overwhelming, challenging but fair.

This means, unfortunately, Firegirl: Hack ’n Splash Rescue is still a work in progress. All of the right elements are here, but they’re not coalescing into what should be the optimal firefighting experience. I truly believe there is a great game buried somewhere within the lines of code that brings it all together. We just got to hold onto hope that Dejima Games will be able to find it.