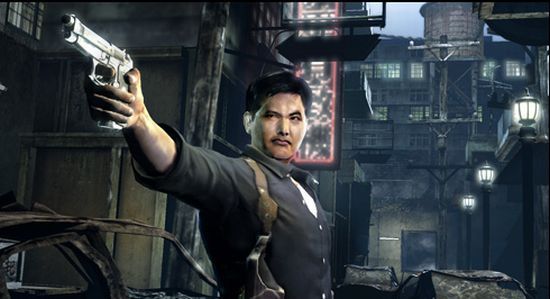 So, here’s the thing:

The majority of gamers are already decided on whether or not they’re going to purchase Stranglehold. If anything, the question of whether or not to buy seems like a no-brainer: if you’re the type who enjoys spectacular gunfights and over-the-top action, Stranglehold might seem to be one of the easiest purchases you’ll make all year.

As the videogame  sequel to one of the greatest action films of all time, and ostensibly developed under the guidance of director John Woo, Stranglehold has essentially been marketed as the ultimate third-person shooter: where games like Max Payne ripped John Woo off without so much as a by-your-leave, Stranglehold, overseen by Woo himself and starring Chow Yun Fat, is the real deal, man.

But does the 360 version live up to these expectations? Does Stranglehold‘s singleplayer prove itself superior to the other Woo-wannabes on the market? Hit the jump to find out.

It’s quite tough to write an effective intro paragraph for a game like Stranglehold: blanket statements like “it’s fun” or “it made me want to kill the developers” don’t accurately reflect the alternating stream of problems and entertainment that Stranglehold offers. Is it fun? At moments, absolutely.  Is it flawed? Undoubtedly. Is it worth your money? Yeah, but no more than ten dollars of it.

Narratively, Stranglehold doesn’t hold a candle to John Woo’s earlier pistol operas. Those gamers whose Woo knowledge doesn’t extend beyond Face Off and Paycheck probably won’t be particularly underwhelmed by the story, but anyone who has seen (and enjoyed) Hard Boiled, The Killer, or A Bullet in the Head will find the myriad of American cop movie clichés (Tequila’s Hard-Nosed, By-The-Book Superior Officer literally asks for Tequila’s badge about a half-dozen times throughout the course of the game) and nonsensical dialogue (“I just got sent a personal invitation!”) really, really irritating. 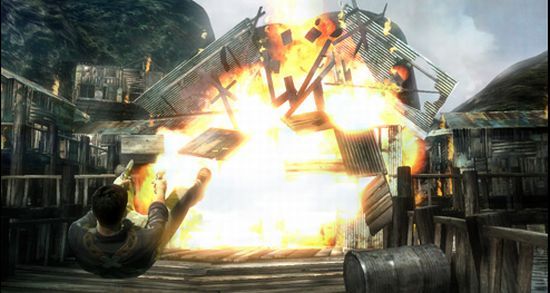 Gone are the themes of loyalty, sacrifice, and honor among themes that gave such great weight to the gunfights of Woo’s earlier films, instead replaced with a story that serves only as a flimsy frame for huge action setpieces. Not to mention, of course, the fact that all of the dialogue is delivered in English instead of Cantonese. Not only is Chow Yun Fat’s cool factor destroyed when he’s forced to speak Badass One-Liners in a language not native to him, but you can’t understand roughly half the things he says and dialogue subtitles aren’t available. Some of the little “Woo” touches are admittedly kind of cute – pistols hidden in bird cages, Woo himself playing the proprietor of the Unlock Shop – but overall, the game feels like even more of a Woo ripoff than Max Payne, despite ostensibly being the first “true” Woo game. In short, Stranglehold’s storyline is worthless. Not quite as worthless as Lost Planet’s, but close.

Visually, the game is gorgeous (as anyone who has played the demo can attest to): the bullet impacts in both scenery and flesh look great, the character deaths function as a nice mixture of scripted animations and ragdoll physics, and the entire game has a considerable visual polish to it. Not to mention the audio, of course: much like the lobby gunfight from The Matrix, the massive battles in Stranglehold serve as a great way to test the quality of your surround sound system. If you’ve got an HDTV and a decent surround setup, Stranglehold will remind you why you spent all that money in the first place – aesthetically, there’s nothing to complain about.

Gameplay, on the other hand, is an entirely different story.

First, the good: most of the gunfights are spectacularly violent, both in terms of casualties and property destruction. At times, Stranglehold feels like a direct port of some unknown arcade game: in the majority of the game’s levels, Tequila is placed in an arena full of destructible goodies as bad guys are randomly sent at him through numerous, enemy-spawning doors sprinkled throughout the area. From that point on, the player is given license to go to town — when you’re given hundreds of environmental objects to rip apart with bullets and just as many enemies to similarly deal with, the game is the epitome of mindless, bombastic fun.  Even during the totally nonsensical “standoff” moments wherein Tequila literally pivots his torso to dodge bullets, the game retains the shallow playfulness of a bad-yet-entertaining popcorn flick. Realism? Don’t talk to me about realism.

The problem? That’s all there is.  Outside of performing  environmental stunts and shooting people in glorious, destructive detail, there’s really nothing else to the game. Period. As fun as the gunfights are when taken individually, they aren’t nearly as varied as they should be when formed into a cohesive package. To put it bluntly, they get pretty damn tiresome after a while: even the best of the gunfights, while fun, are pretty much just like all of the other gunfights in the game save for location and weapon loadout. Blasting through the alleyways of Hong Kong armed with dual pistols and a shotgun really doesn’t feel any different than plowing through the Metropolitan Museum near the end of the game with an assault rifle and dual SMGs – hell, if anything, the Hong Kong alley is more fun, thanks to the weaker enemies and plentiful physics traps.

As Stranglehold will invariably be compared to the Max Payne series, it’s worth pointing out that this is where the two franchises differ most sharply: Payne’s focus on telling a complex story resulted in decently varied gameplay, whereas Stranglehold’s complete lack of narrative turns the game into a large collection of self-contained, arcade-style shooting matches.

Not to mention the fact that the game is really goddamn short. To complain about the monotony of Stranglehold‘s gunfights and then go on to insult its meager length may bring to mind Woody Allen’s opening joke from Annie Hall (“This food at this place is really terrible.” “Yeah, I know; and such small portions”), but both complaints miraculously hold weight: as if defying all known logic, Stranglehold manages to be too short and too repetitve. 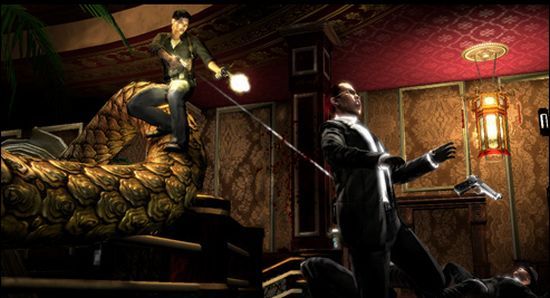 All told, there are only seven levels: discounting the miserable second level (which, in forcing the player to run around and destroy six hidden drug labs, then twelve, then eighteen, may very well be the single most insultingly tedious gaming stage I’ve ever played) and the first level that was 75% present in the demo, you’re really only paying for five new areas. The entire game only lasts about three to five hours on normal difficulty: I bought the game Tuesday and finished it that same night.

Beyond that, Stranglehold suffers from numerous control problems. The “stunt” button that allows Tequila to, say, slide down a banister, is the same as the jump button, which can lead to some very irritating moments as the game fails to recognize whether you want to jump over a ledge, or jump onto it, or slide down, or who knows what. The game is also extremely finicky about where or when you can jump: if you’re too close to an obstacle, pressing the jump button won’t do anything, and if you’re too far, you’ll miss the jump entirely – in essence, the environment tries to control when and where you can jump. For a game built around the idea of massive, smooth, stylish, nonlinear gunfights, these control issues are pretty difficult to ignore. Also, on a completely unrelated personal note, I also found the camera’s placement juuuuust a bit too close to Tequila’s body, causing some difficulty (and a bit of nausea) whilst turning.

Overall, Stranglehold is an immensely flawed but occasionally kickass game that is best enjoyed in short bursts. The gunfights are undeniably fun, but all of them are more or less identical to one another and get old rather quickly. While I wasn’t able to experiment with the multiplayer, I cannot conjure up any reason to actually buy the game: it’s too short, too repetitive, and if you’ve played the free demo, you’ve already played one of the best levels in the game.

That said, however, I do consider Stranglehold a “must-rent” game. It’s most assuredly worth the eight or nine bucks to experience the different levels and Massive D scenarios, and even I have to admit that seeing Inspector Tequila again – even in a story as absurdly underwhelming as Stranglehold‘s – is pretty exciting. If you do end up buying it, I would suggest that you only play it for twenty or thirty minutes at a time: not only will you spread the meager amount of gameplay over several days, but playing it in short bursts will prevent the levels from ever feeling as stale or repetitive as they might if played back-to-back. After that, do what I did: sell your copy on eBay, and just play the free demo should you ever feel a niggling itch to touch this promising, but ultimately underwhelming, title once again. 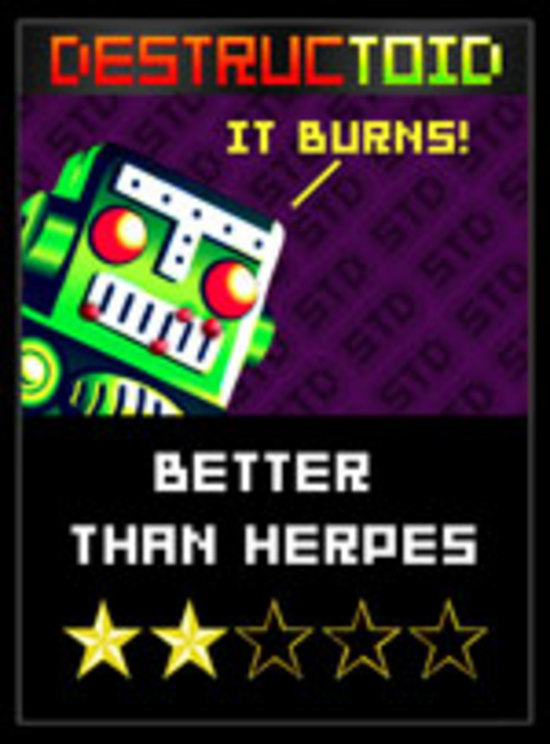