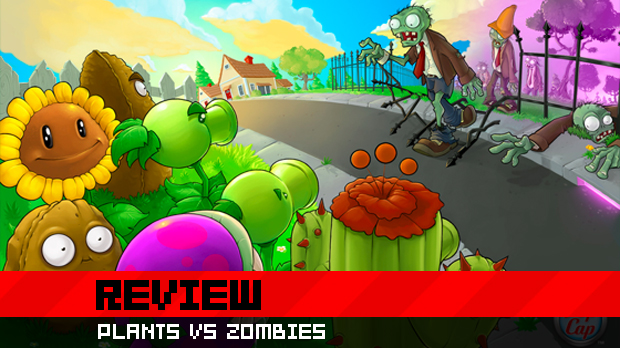 There’s one surefire way to amp up the cool factor of pretty much any game on the market, and that’s to add zombies. With PopCap’s newest offering, Plants vs. Zombies, this winning recipe also adds in green leafy characters fighting on the side of good and a simple premise: zombies try to shamble onto your lawn, and you try to amp up the power of your garden to keep them off. It sounds like a rocking good time before you even get started, really.

Join myself and Brad Nicholson past the jump as we dissect what it is to be a zombie, squabble over the strategy of using cattails rather than Venus Fly-traps, and discuss the finer points of fighting Michael Jackson.

For those of you who have somehow missed the stream of funny viral videos coming from PopCap for promotion of this game (and shame on you), I’ll revisit the basics. Plants vs. Zombies is basically a tower defense game with a generous injection of humor. Zombies have decided to stake a claim on your front lawn, and you have to prevent them from doing so by using a wide variety of plants to block the way.

The game’s main mode is Adventure, which teaches you the basics of play and guides you through the clever story. It’s definitely not deep, but anyone with even a remote sense of humor will be laughing aloud at all the funny bits that PopCap threw into this game. In your first level, you’ll start out with only a few plants and a few really basic zombies. Your lawn is a nine-square-by-five-square grid, which you can set up in any way you want to defend against the oncoming horde.

In the daylight levels, you’ll use sunflowers to help generate sunlight, which is basically the building block of your arsenal. As you earn sunlight, you can use it to build plants to help you defend yourself. Peashooter is your first offensive plant, a little green guy who shoots a single pellet forward, and Wall-Nut your first defensive plant. You’ll notice all the plants have a bit of personality. For instance, the Sunflower kind of dances, while the Wall-Nut has a vacant stare and a tiny smile (mind you, this expression changes once he starts to get munched on). You can expect to see this level of humor and detail in all 48 of the plants you can eventually get in the game. 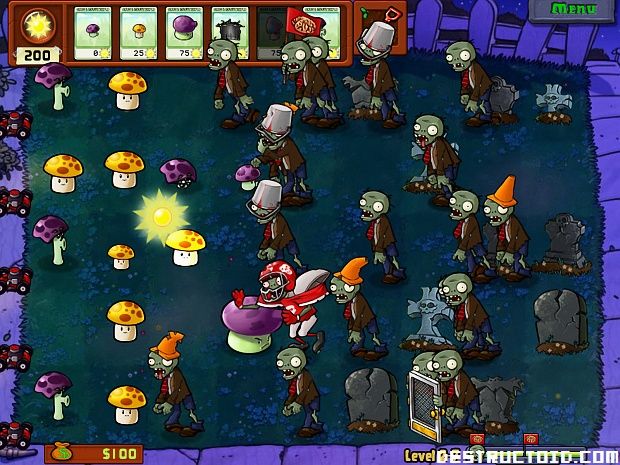 I don’t want to leave out the zombies here, because every ounce of care and time that obviously went into creating this game shows with them as well. By the end of the game, you’ll have met 26 different types of zombies. As you progress, all the zombies you’ve met and plants you’ve gained will be recorded in an almanac, which you can access at any time via the selection screen before a level starts, or from the main game screen. In most games, these bestiaries are nothing more than an excuse for a bunch of copy no one really cares about, but in Plants vs. Zombies, you’d be doing yourself a disservice not to go read the entire thing. I don’t want to give anything away, so I’ll leave it as this: it’s hilarious. Have I mentioned you eventually fight Michael Jackson AND his dancers?

As you progress through Adventure mode, you’ll eventually meet Crazy Dave, a guy who wears a pot on his head and will gladly sell you stuff out of the trunk of his car. You earn money as you kill zombies, so by the time you meet Dave, you most likely will have a bit of green saved up. Read carefully when you make it to the shop, because some of the plants and accessories Dave sells are pretty invaluable in the later levels. I am all about those cattails!

The difficulty does ramp up as you progress through the game’s Adventure mode, but as a whole I found it fairly easy to navigate my way through, so if you need hardcore difficulty to find satisfaction in a game, you won’t find it in this mode. However, the game does offer three more modes: Mini-Games, Puzzle and Survival. By delving into those three, you’ll find that a much steeper challenge awaits. A few levels are open in each of these modes when you first poke your head in, but you’ll have to finish the open ones to unlock new ones. Mini-Games like “It’s Raining Seeds” and “Beghouled” really make you kind of envy the developers — you can only imagine how much fun it must have been to make a title like this. 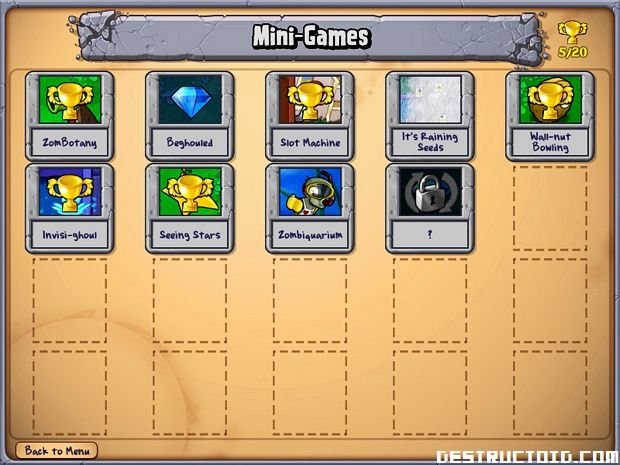 You also have replay value on your side if you complete Adventure mode, as you can go back and do it again, but Crazy Dave will pick three plants for you every level that you must play with no matter what. I’ll let Brad tell you more about this option, but basically, it gives you a great excuse to do it all over again if you find you’ve developed a severe case of Plants vs. Zombies addiction!

In addition to all this stuff, there is also another area of the game called the Zen Garden, which you can access through the title screen. When you first go to the garden, you will only have a few plants. You can water and buy seeds to feed to your specimens to make them grow. As these plants grow, they will yield more money for you. As you find more plants, you may have to expand out into different types of gardens to care for them, such as night and underwater gardens. You can also purchase access to the Tree of Wisdom, which will give you hints and codes to input for hilarious results (one code, for instance, allows you to add Geraldo-like mustaches to all your zombies).

If you think this sounds like a lot of content for the price, you’d be right: the sheer amount of things to do in Plants vs. Zombies will keep you busy for hours, and even once you finish the game’s Adventure mode, there’s still tons left to do. I honestly think the game is worth more than you pay for it, which should make it a must-buy for you right there, but beyond that, the most outstanding feature of this incredibly fun title is its personality. Every inch of Plants vs. Zombies is jam-packed with humor and attention to detail, and I never once stopped enjoying its clever take on the genre even after I had exhausted everything it had to offer. Do not miss this game — titles this good don’t come around often.

Silly me; I thought it wasn’t possible to revitalize the tower defense genre.

Colette has beautifully summed the game and its parts, so I’ll lightly stray from that and discuss three prominent characteristics of Plants vs. Zombies: depth, character, and addictiveness.

Perhaps I’m jaded, but the one thing that has always bugged me about traditional tower defense games is the lack of offensive options. Plants vs. Zombies gives you host of viable offensive options that you can change on a whim or tweak from level to level. I’m a defensive player by nature, so I tend to suck sun and utilize the bigger guns. But if I wanted to change it up — as I tend to do from time to time — I could pick from an assortment of smaller pea shooters, catapults, and other delectable chaos causers.

When you beat Adventure Mode — which unlocks a good bit of extra content — you can immediately re-enter the mode and essentially experience a new game. Your crazy neighbor picks the first three weapons or items that you’ll go into battle with, forcing you to reconsider your strategies that may have carried you through Adventure the first time around. 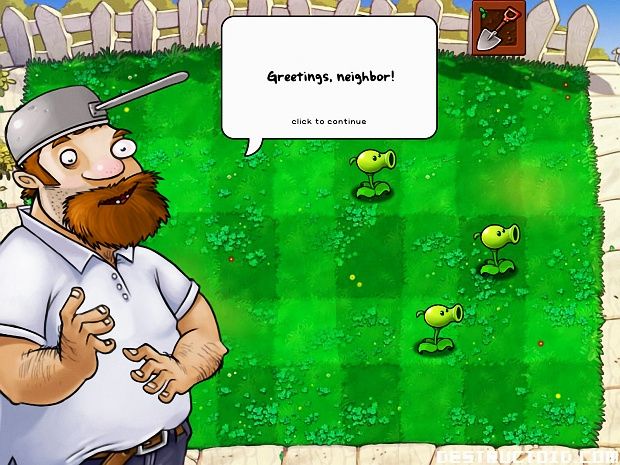 In the beginning of the new experience, it isn’t a big deal. But by the second stage, it becomes obvious that you need to change as a player to deal with the undead onslaught. The items that he chooses are often of the off-the-wall variety, forcing you to reconsider your habits and re-evaluate approaches. It’s a breath of fresh air — something that I really enjoyed after my countless hours of initial play in Adventure Mode.

As locations change, so do your needs. The roof levels in particular require intimate knowledge of the game and its mechanics. You’ll need to be careful when building flowers, because one false planting could spell a delayed disaster as the horde begins to make lumber of the roof’s tiles. The roof levels are the perfect example of weighing immediacy vs. future needs. Should you go for the cabbage catapult or the flower? It all depends on what type of undead you’re facing and what you want to do as the commander of a pea plant army.

My perception of the game’s depth isn’t merely derived from the game’s plethora of offensive weapons and items. It also stems from the large amount of sidebar stuff in the game. After beating Adventure Mode, I found myself entirely too engrossed with the Zen Garden — an environment that allows you to grow plants at your leisure in order to earn money needed to invest in new equipment, upgrades and items. 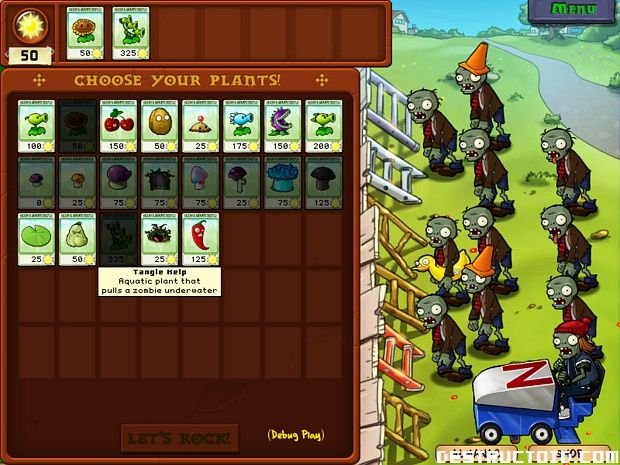 The rewards — money — received from successfully making your plants happy are small at first, but eventually become mammoth. As you make more and more cash, you’ll find yourself buying new Gardens and playing Adventure Mode for new and exotic types of plants.

I also think there’s something to be said about the Zen Garden in terms of atmosphere. The entire PvZ experience is cracking zombie skulls. The Garden is chilled — there are no enemies or rush to build the next weapon. It’s just you, plants, and the hope to make enough money to buy more. Even when you think you’re done with the game, you’re not. I’ve been going to bed much later than when I expected, thanks to the extraneous Mini Games and Puzzles offered in the game. Games don’t often successfully feed off themselves like Plants vs. Zombies does.

PvZ is delightfully quirky from the art on down. The premise of the game is laughable, and apparently this hasn’t escaped the art design of the game. Each of the zombies you’ll meet — and hopefully smash — have a delightfully tacky and goofy appeal. This even extends to sound. You won’t catch the Fever, but you may catch yourself humming along with the main title music or laughing at the sound of your brain being munched. Awesome stuff. 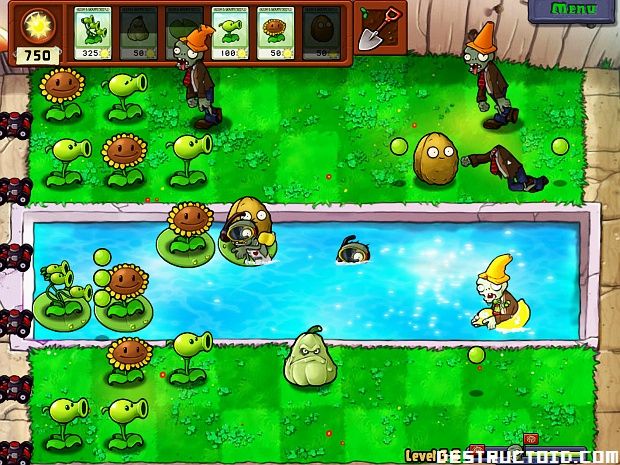 There’s a ton of things that will keep you coming back for more in PvZ. The Zen Garden was the biggest hit for me, but the large amount of mini-games, puzzles and unique spin on the second journey into Adventure Mode will keep you clacking on that mouse for many, many more hours to come. PvZ is a new drug, capable of sucking your productivity and shedding many hours of your day.

Throughout my play, I discovered nearly nothing wrong. If I wanted to quibble, I would point out that occasionally the bowling levels are a little too hard, the rooftop levels are a bit out of character with the rest of the game thanks to the introduction of the catapult, and the initial play-through of Adventure Mode is pretty easy. But those are just quibbles. Do yourself a favor and buy Plants vs. Zombies if you’re even considering it.