I Kaiju Choose You

On March 14, 2022, the world learned of the passing of Akira Takarada. While perhaps not the most recognizable name in cinema history, the Japanese-Korean actor holds a special place in the hearts of monster movie fans, having carved out a niche in myriad Japanese creature features. Takarada starred in the original Toho production of Godzilla (1954) as well as its many sequels, while also battling beasties in the similarly themed Invasion of Astro Monster (1965), King Kong Escapes (1967), and Latitude Zero (1969). Takarada would even receive a small cameo in Gareth Edwards’ Godzilla (2014).

During his decades on the silver screen, Takarada came to understand the timeless nature of the “Kaiju” genre. There is a huge global community of fans who, no matter the generation, will flock to see gigantic neolithic monsters do battle within recognizable cityscapes — fighting it out against a backdrop of broken human politics, capitalist greed, and man’s inhumanity to man. You might be seeing a dude in a rubber suit doing a German Suplex, but you’re also being told, quite plainly, “Fuck Nukes”.

Witnessing devastation and destruction, wreaked upon the world by a cast of scaly behemoths, remains an enthralling cinematic sub-genre — and is as thematically relevant in the ’20s as it was in the ’50s. The kaiju movie has become a beloved and respected cornerstone of science fiction, equally recognized and celebrated in WayForward’s brand new slugfest Dawn of the Monsters.

So pull on your big rubber feet, and let’s Do the Stomp. Storming out of Canadian independent studio 13AM Games, Dawn of the Monsters is a narrative-driven side-scrolling smash-’em-up — blending the core of brawlers and fighting games with the character build mechanics of roguelite adventures. Set in the far-flung future of 2036, the planet Earth has been all but conquered by a terrifying force of giant alien creatures, known to mankind as “The Nephilim”. These behemoths have driven humanity underground, where they cower in fear of the devastation that rages above, as an ever-evolving battalion of beasts lays waste to the scorched earth.

All is not lost, however, as a resistance faction formed of the smartest, richest, and/or bravest hearts and minds is embarking on one critical push to reclaim the weary planet and push the invaders back into oblivion. Enter D.A.W.N., (Defense Alliance Worldwide Network), a body that has spent the past decade studying the enemy, gathering forces & resources, and creating its own army of towering titans. Operating out of its satellite headquarters, The Sunrise, D.A.W.N. prepares to return to the Earth’s surface, executing a shattering do-or-die counter-attack with the fate of humanity itself at stake.

While it would be easy to assume Dawn of the Monsters is a brawler of the Streets of Rage or Final Fight variety, that would be somewhat inaccurate. While DotM does feature the typical tropes of the beat-’em-up, it moves to the beat of its own drum, reflecting the heavyweight nature of its cover stars. The result is a blend of side-scrolling brawler and one-on-one fighter, with an emphasis on optimized combos, parries, elemental effects, and precise, tactical movement.

DotM‘s fisticuffs feel suitably epic, as our huge, screaming warriors smash it out above the bridges and skyscrapers of abandoned cities. Megaton by nature, our protagonists and antagonists can often leave the action feeling a little sluggish and perhaps “heavier” than many players would like from their belt-action brawlers. In fact, the deliberate pace can often work against the flow of action, sometimes leaving fights feeling more of a chore to push through, rather than an exciting dust-up with a city at stake.

This naturally heavyweight pace is balanced out somewhat by DotM‘s deep, defined combat, which rewards experimentation, timing, and smart screen awareness. When coupled with the title’s array of defensive abilities, cinematic rage attacks, and super satisfying “Cataclysms” (essentially Supers), it is surprising and refreshing to explore just how intricate the DotM combat mechanics are.

For a game that is, essentially, all about dinosaurs smacking each other in the chops. Dawn of the Monsters is absolutely not a button-masher. As the player racks up kills, executions, and extended combos, a ranking system will reward them with a selection of “Augments”: effect-laden boosts that can be applied to your Nephilim between missions. These range from health and damage buffs, to increased meter gain, powered-up parries & counters, or the ability to add armor frames to certain attacks. This mechanic adds further depth to your chosen kaiju, making them even more dangerous as they romp ‘n’ stomp their way throughout the continents of the world. The only problem is… they’re kind of powerful enough to begin with…

Dawn of the Monsters is a surprisingly easy title, especially once one has gotten to grips with its core mechanics. From its early missions, one optimized combo can put paid to essentially all enemies with relative ease. Once the Augment mechanic unfolds, your scaly boy/girl can often feel overpowered to the point of game-breaking. By the second chapter, I already had a build secured that essentially allowed me to simply parry many opponents to death, racking up “S” rankings with reckless abandon.

The slim challenge offered is fine for those simply looking for an action-packed smack-’em-up to be enjoyed with a buddy but, as a single-player campaign, DotM lacks a sense of adrenaline. The combat is smart and creative and, with a little work, players will soon have Kaiju heads littering the streets. But the rock ’em sock ’em action is undermined by DotM‘s relaxed pace and lack of challenge. While undoubtedly fun, especially in co-op, the campaign ultimately runs out of steam before its final act. One element of Dawn of the Monsters that defies criticism lies in its aesthetic. From its fantastic splash art to its dazzling in-game visuals, DotM masterfully reconstructs the visual style of yesteryear’s comic books. The doomed cityscapes (and their respective doombringers) are beautifully designed, delightfully animated, and awash with an amazing palette of pop-art color.

In addition, DotM has needle-sharp depth. The 2D action just pops off the screen thanks to some excellent shading, affording each stage an authentic sense of perception. Visually, DotM is one of the finest 2D releases in years. See the image above for a prime example of its “living-comic-book” universe.

Backing up these fine graphics is an epic, foreboding, and bass-heavy score, suitably punctuating the “End-of-the-World” theme of Dawn of the Monsters‘ narrative. As Megadon and his pals throw down in abandoned neighborhoods, streams, and metropolitan districts, their strikes, blows, specials, and range of powerful space-age weaponry are all accompanied by suitably effective booms, blasts, and roars. Played through headphones, DotM offers a true cacophony of chaos, perfectly suited to the rampaging on-screen action. Dawn of the Monsters is an opera of nihilism. From an audio/visual standpoint, it’s difficult to imagine how 13AM Games could have better represented its comic book apocalypse.

As a fun distraction between missions, players can learn more about DotM‘s intriguing world, lore, and cast of characters. Players can eavesdrop on fellow crew members — a likable bunch of international agents who, while tropey, are both visually cool and well-performed by an enthusiastic voice cast. As the campaign progresses, further lore is unlocked, allowing the player to learn more about the fateful events that brought about this horrifying crisis. Additionally, players can also use in-game currency to purchase palette-swaps for the DotM roster — each and every one of them is a sartorial delight.

There is very little else in the way of unlocks and alternate modes, which finds the $30 price tag a little wanting. It should also be noted that co-op multiplayer is local only, there is no online to be had. 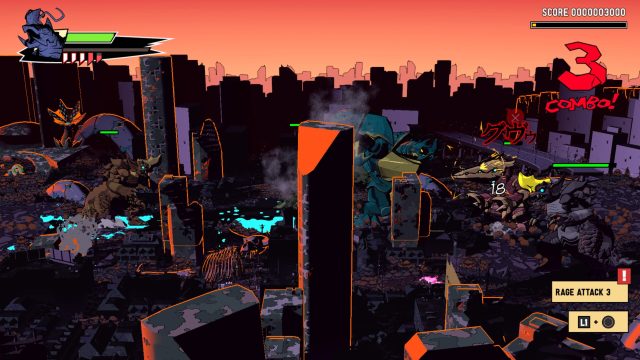 Dawn of the Monsters is something of a victim of its own ambition. No one would deny that 13AM Games has put a lot of passion and effort into its creation, offering up a chaotic, head-ripping, building-breaking action experience. But something in the final mix just doesn’t quite gel. The core problem is that combat is deep, fun, and clever, but also somewhat redundant due to a lack of challenge — a problem that also hurts the equally smart Augment mechanic. When you combine the low difficulty with DotM‘s generally unhurried pacing, you have a title that is fun, but not exciting.

That is not to say that DotM is bad. Far from it. It looks and sounds fantastic, it has an interesting world, smart customization options, well-designed bosses, and will most definitely provide hours of joy for two buddies on a lazy weekend. Importantly, it absolutely captures the spirit of its source material, presenting — with great pride — a worthy tribute to the legendary kaiju kulture. Fans of that timeless genre, or those just looking for a spot of co-op monster-mashing, will not feel too let down.

Dawn of the Monsters is a fine time that is shy of greatness, though not for lack of trying. 13AM’s tribute to a timeless cinematic genre captures the majesty, scale, and nihilism of its inspiration, stamping its own mark with smart combat and fantastic visuals. Unfortunately, repetitive missions, undemanding challenge, and slow pacing may dishearten solo players or those who prefer their scrappers on the speedier side. Regardless, anyone with a case of Atomic Breath should find some cataclysmic fun within.