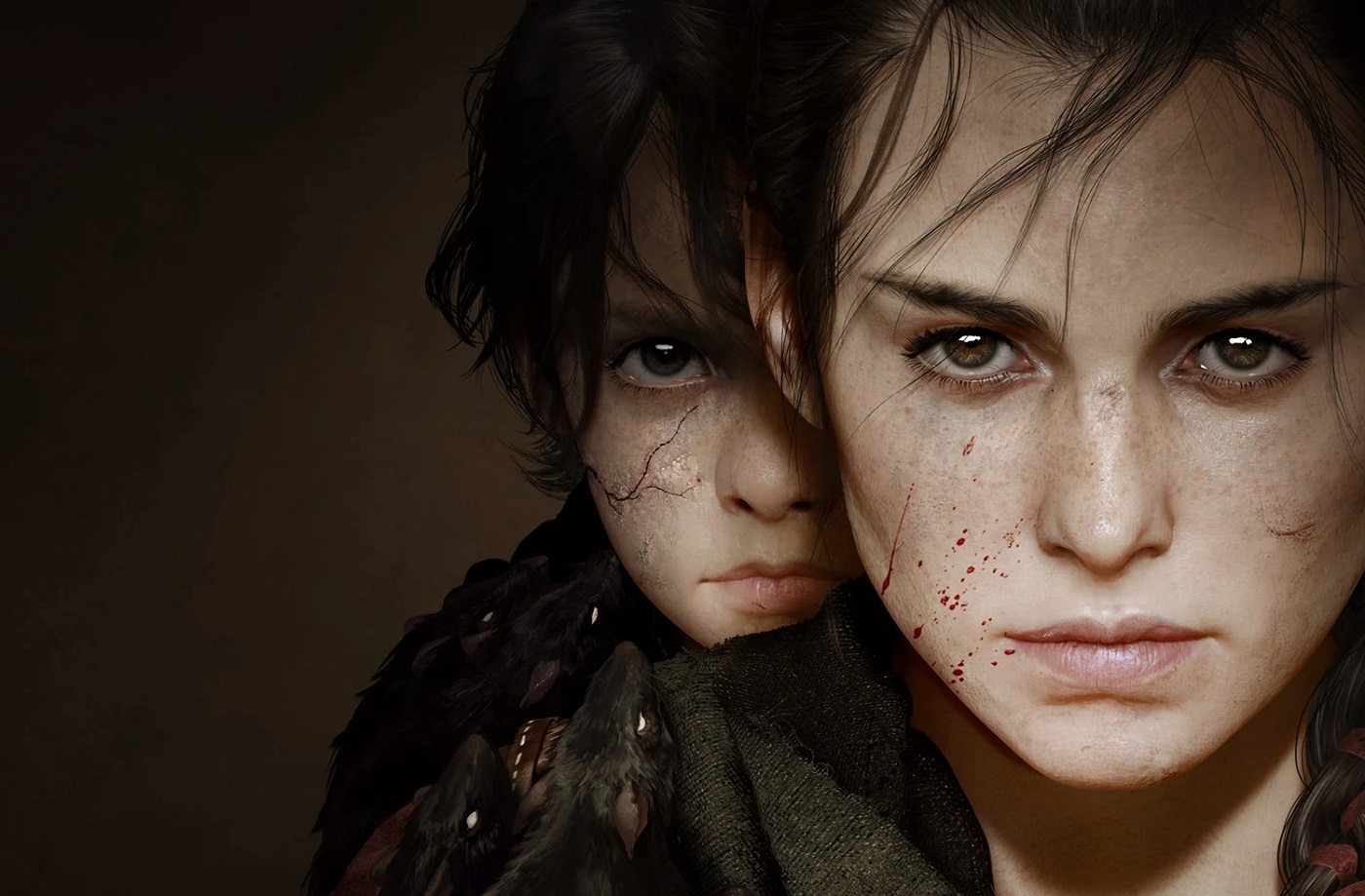 Of Rats and Resilience

Asked about “horror games”, a genre that has come into its own over the past two decades, many players will distinctly think of the visceral, the grotesque, and the physically unfathomable.  These terrors can arrive in the form of mushroom-headed mutants, giant, overhead spiders, or hideous, skinless, black-eyed zombies, ready to pop up directly into your PoV with a ghastly scream in what we have coined the “jump scare”.

But, even within scenarios set outside of our own sphere of time or reality, horror can strike much closer to home.  It can be presented in its purest form, via themes of grief, regret, responsibility, and, scariest of all, the loss of one’s own capabilities, focus, and mind.  I’ve never encountered a mushroom-headed mutant, but I’ve been completely terrified at the thought of a loved one in peril, or concerned that I won’t deliver in a desperate hour of need.  More candidly, I frequently feel abject fear about my own ability to be who I want to be, or even the person that I need to be.

A Plague Tale: Requiem is a horror game, no doubt.  But its teeming, skin-crawling swarm of black rats only represents its horror in a physical and fantastical form.  Who we are, our inescapable fates, the fragility of our lives, the untold damage we can do to ourselves and others, and the irreversibility of said damage — this is also horror.  And it is the horror that faces Amicia and Hugo de Rune.  A horror so relatable, so tangible, so real, that it can reach out through the screen and grab hold of us, cutting deeper than any sackcloth-wearing, chainsaw-wielding madman. 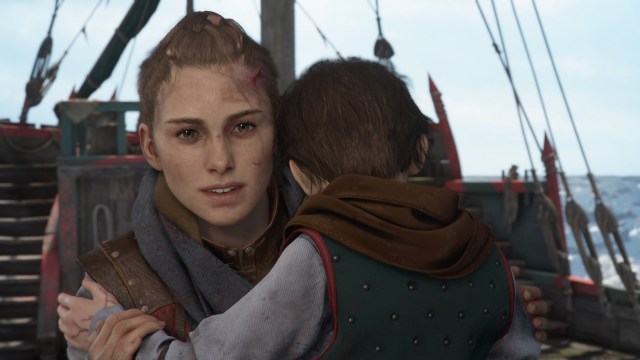 A Plague Tale: Requiem is the sequel to the cult 2019 sleeper hit A Plague Tale: Innocence, produced by French developer Asobo Studio.  As an untested IP, not boosted by the billion-dollar cogs of the marketing machine, Innocence had to fight to make something of a name for itself, despite being well-regarded by critics and beloved by an ardent fanbase.  As a stealth title with a heavy emphasis on narrative progression, patient gameplay, and extensive dialogue, Innocence struggled to find its audience against similar cinematic adventures.  Sat against the Molotov cocktails and box-cutter zombie stabbings of its brethren, Innocence‘s flower-collecting side-quest wasn’t really pulling in the masses.

And it’s a damn shame, because it was a pretty special release.

In creating the sequel — a sequel that was never guaranteed to get the go ahead — Asobo Studio has chosen to stick to what originally brought it to the dance.  For better and for worse. A Plague Tale: Requiem chooses not to stray far from what made its predecessor a low-key classic. Instead, the studio has merely tweaked some of the gameplay elements, while focusing on boosting the scope, scale, and narrative power of its world and story — also harnessing modern-day tech to further polish the franchise’s celebrated, stunning environments.

And thus, rather than attempting to win over everybody, A Plague Tale: Requiem instead has chosen to double down for somebody.  In doing so, Asobo Studio has created what can be considered a flawed but very enthralling mini-masterpiece.

Light their way, When the darkness surrounds them,

Following on from the events of Innocence, Requiem sees Amicia and Hugo de Rune attempt to rebuild happier lives in the aftermath of their tragic odyssey through the province of Guyenne.  With life looking up for the first time in months, the de Rune offspring are moving into a beautiful new province, away from the oppression of The Inquisition and the terrifying black rat plague known as “The Bite”. Unfortunately, these youngsters soon discover that, no matter how far they travel, their fate is inescapable.  A chance encounter with ultraviolence reawakens Hugo’s dormant bloodline, “La Prima Macula”, bringing with it a million piercing eyes and a billion razor-sharp teeth.

Their new life in ruins, and riddled with guilt and despair, Amicia is convinced that the answer to stopping this endless nightmare lies in a mythical island, envisioned by her brother in a series of strange dreams. With death nipping at their heels, thousands of innocent bodies behind them, and myriad armies, doomsday cults, and vengeful victims out for their blood, the duo is forced back onto the road — searching for a place, a cure, or simply an answer that may not even exist.

Requiem is a story about duty, family, friendship, and destiny. Its sharply written and utterly compelling chronicle is set against the backdrop of the encroaching rat army, but places its focus squarely on our heroes, their allies, and their enemies. From young Hugo’s despair at a world that forever disappoints him, to Amicia’s increasingly declining mental and physical health, Requiem is about the frayed bonds of hope, as two broken youngsters search for stitches to repair seemingly irreparable lives. 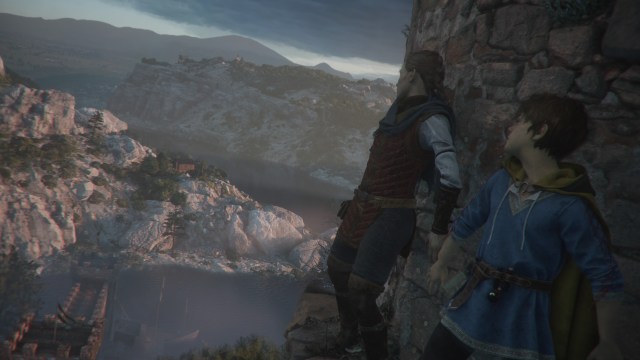 Give them love, Let it shine around them,

It behooves me to speak at great length about the narrative because, as previously mentioned, A Plague Tale: Requiem does not do a whole lot to reinvent its gameplay. Still a stealth adventure at heart, Requiem consists of lengthy, (but arresting), walk-and-talk sequences, perforated with frequent forays into crawling through long grasses, throwing pots, starting fires, and, when the best-laid plans of… rats and… women… come crashing down, fighting for your life with the aid of a slingshot and a selection of alchemic ammunition.

While some new elements are introduced, little has advanced in Requiem’s gameplay from its predecessor. A veritable feast of cart pushing, lever-pulling, and stick-burning lies ahead. Hell, even Amicia’s hilarious habit of bolting every door behind her is still present and correct.  There are some new abilities, alchemic items, and weapons introduced, while a new counter-attack feature always offers our girl a “second chance” upon discovery.  This helps a little with the frustration of getting caught in the act.

The clunky “Stay and Come” Hugo mechanic is gone entirely, with the young lad developing some… worrying abilities himself as the story progresses. In addition, the stealth sections are a little more open-ended than they once were, typically offering more than one route to the objective. A neat feature sees Amicia’s skill tree auto-fill based upon playstyle, with respective rewards for going in quiet as mice or all crossbows blazing. Still, for the most part, anyone who has played Innocence knows what to expect here: walk and talk, stealth, action setpiece, and plenty of hidden flowers (and feathers) to collect.

While this sounds like very “safe” design, (and it is), Requiem‘s calling lies in its surrounding elements. Literally. 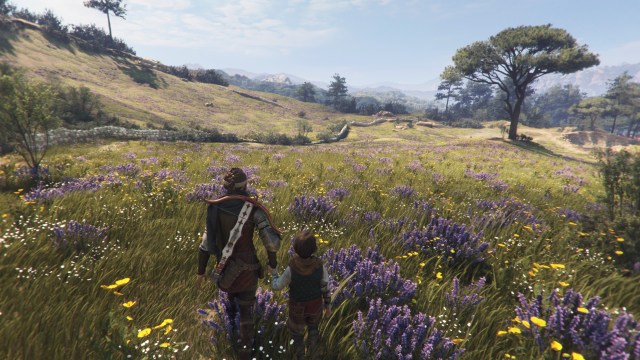 Keep them safe, keep them warm

A Plague Tale: Requiem is a gorgeous game. While Innocence already pushed console limits in regard to environment and visual effects, Asobo Studio has harnessed modern tech to produce some of the most beautiful and absorbing towns, meadows, beaches, and vistas experienced in gaming. The flora and fauna of Requiem‘s world, along with its bustling town fairs, ramshackle villages, and ornate monasteries are dazzling, equally juxtaposed by the skin-itching misery of its sewers, slums, swamps, and endless mounds of viscera that our protagonists will be forced to wade through.

Adding further to its world are some fantastic weather effects and a highly realistic audio package that certainly deserves to win awards. From the dynamically adaptive and deeply affecting score of returning composer Olivier Deriviere, to a smorgasbord of authentic and seamlessly integrated sound effects, Requiem sounds every bit as good as it looks.  Its paradise islands, cheerful marketplaces, storm-ridden seas, and bleak, war-torn fields balance its majestic audio/visuals to create a “lived-in” world — as warm and attractive as it can be completely cold and repellent. 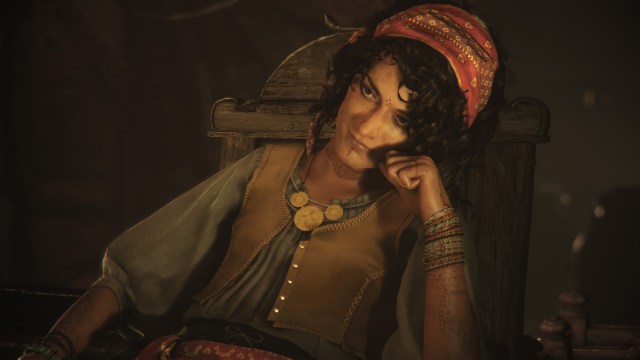 Give them shelter from the storm

Clearly aware that its stealth-based gameplay is somewhat on the rote, even repetitive side, Requiem goes all-out to present a story, world, and cast of characters that truly embrace the players and their emotional resonance. Requiem‘s tale runs a gamut of themes focusing on unspeakable tragedy and how it affects the individual, the family, the fanatical, the religious, and all those who fall in the cracks between. As one might expect, it’s a rough ride, with events getting almost unbearably oppressive as the second act progresses, (though the arrival of some likable new characters brings relief).

Amicia de Rune still holds fort as one of the great unsung heroes of gaming’s modern age. The elder de Rune’s struggle is depicted at great cost to the player’s heartstrings.  Amicia’s declining mental health, loss of self-identity, and abandonment of her stolen teenage years form a core theme of Requiem‘s underlying narrative. In the (highly recommended) French voice track, Amicia is once again brought to life by actor Charlotte McBurney, who gives a stunning, nigh-on flawless performance as the young woman forced to abandon all that she is, and to take up arms, to endure, and even to kill, by the terrible hand dealt her bloodline. True character strength. Depicted and performed with passion and conviction.

A Plague Tale: Requiem is a legitimate cinematic epic — a deliberately paced odyssey that expresses its heavy emotional arc at its own speed.  Several hours longer than its predecessor, Requiem is confident in its story and asks that the player allow themselves to sink into the adventure without paying too much attention to their watch. In Requiem, we are not here to run (at least not always) and the game will reward the patient with engaging conversation and resonant dialogue. 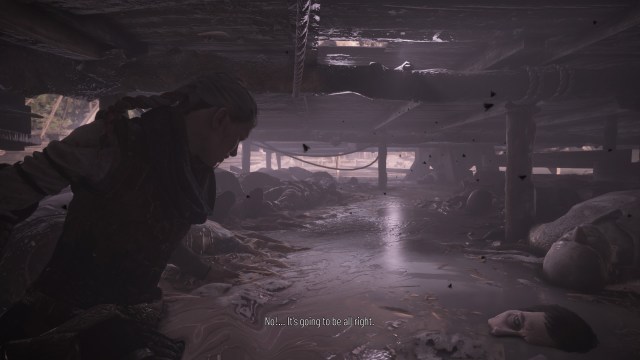 Bless the beasts and children

It’s difficult to score a game that does little in the advancement of gameplay, instead choosing to put all of its chips in its visuals, sound design, world layout, characters, and narrative. Ultimately, Asobo Studio has created a fantastic, rewarding sequel for fans of A Plague Tale: Innocence that will, just like that release, likely turn off those who prefer their third-person adventures with a little more machine gun.

A Plague Tale: Requiem is a stealth game through and through, and the gameplay carries with it all of the exact same perils and pitfalls of repetition that come with the now-aging genre.  This element, much like Innocence, may dissuade fence-sitters from parting with their hard-earned $60 (though Requiem is available on Xbox Game Pass). However, as an example of video games as a cinematic storytelling medium, it is fair to call Requiem a bar setter, capably delivering a solid and emotive journey.  A Plague Tale fans — their passion and loyalty rewarded — will be captivated.

Choosing not to reinvent the wheel in regards to its by-the-numbers stealth gameplay, A Plague Tale: Requiem instead goes above and beyond to present greatness in its overall package, delivering an enthralling story, magnetic characters, tense action setpieces, and stunning visuals that rank among the generation’s finest. It won’t bewitch everyone, but for devoted fans of rats and resilience, A Plague Tale: Requiem absolutely delivers.