Bless the Beasts and Children

Every now and then, a title shows up on the video game market that has all the passion and talent of the “AAA gaming” scene, but without the budget or the marketing machine of a Warner Bros. or an Activision in its corner. Despite this, some of these “mid-tier” releases go on to find critical and/or financial success. Titles such as Ninja Theory’s award-winning Hellblade: Senua’s Sacrifice are an obvious example.

Publisher Focus Home Interactive seems to be sold on the idea that you can release great, profitable games without bankrupting the stock market, ruining your workforce, relying on annual sequels, or launching with a two-year DLC plan. In the summer of 2018, Focus released Dontnod’s Vampyr, which managed to turn a profit shortly after one month, before going on to eventually shift well over a million copies.

Focus is now hoping for similar success with this latest unknown entity, A Plague Tale: Innocence. Developed by French outfit Asobo Studios, A Plague Tale is a somber story of courage, loss, and political oppression, set against the backdrop of one of history’s most horrifying time periods. It’s also one of the best games I’ve played this year. 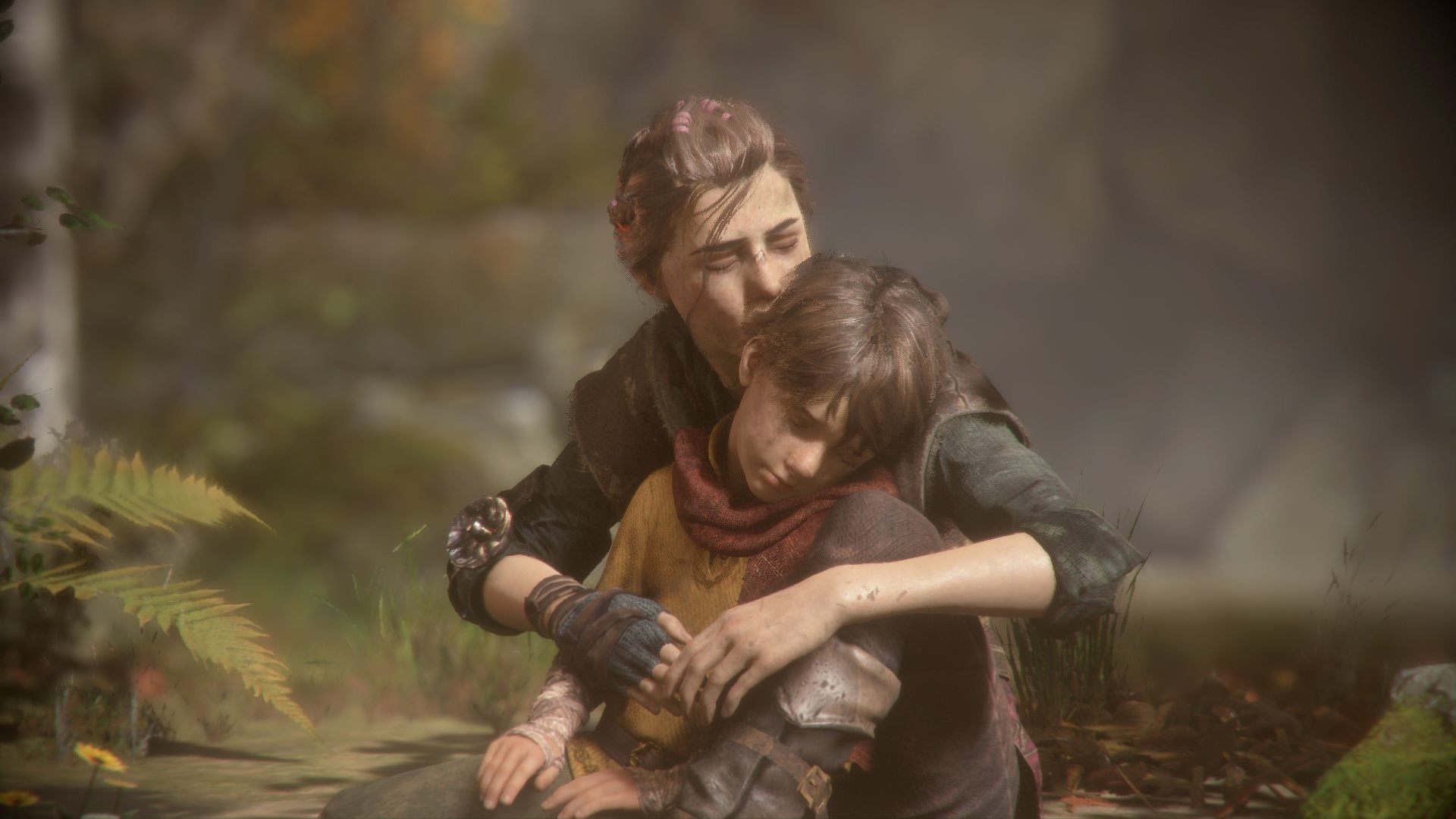 Set in 14th century France, A Plague Tale: Innocence is the story of a courageous young girl, Amicia De Rune, and her even younger brother Hugo, who has been sick since birth. Children of noble blood, the De Rune family have thus far managed to evade the prevalent death that is creeping across the country, carried by an underground army of black rats. That is until a particularly violent morning, when the De Rune children are forced to flee their opulent home, driven out by a bloody attack from those terrifying defenders of religion: The Inquisition.

Having already seen more horror in one day than any child should in their lifetime, and now hunted like animals by The Inquisition’s soldiers, Amicia and Hugo flee deep into the Aquitaine district. Over the course of this dark and seemingly hopeless journey, Amicia will be forced to become a strong-willed, fearless young woman, fending off impossible odds in the form of a battalion of heavily-armed soldiers, as well as the terrifying rodent menace that literally plagues the countryside.

Fortunately, the siblings are not completely alone. The Plague may have killed many, but there are scant survivors, fellow enemies of authority, who Amicia and Hugo will encounter on the road. Soon, our twosome become a party who, outnumbered and outmatched, must rely on crude weaponry, subterfuge and the ancient science of alchemy to escape the district, The Inquisition, and the teeming mass of teeth and claws attempting to swallow them all.

A Plague Tale is a linear single-player stealth adventure, interspersed with puzzle elements of the lever-pulling, box-pushing kind. “Linear” is stressed. This isn’t an open-world game, there aren’t multiple paths to be chosen, and while secrets exist, they’re mostly just the discovery of extra ammunition and supplies. First and foremost, A Plague Tale is a stealth title, with each chapter of the siblings’ journey divided between either escaping packs of rodents, or sneaking past burly guards, who’re are able to cut down Amicia in a single blow.

The De Runes must rely on teamwork and trickery to push through each location, whether creating distractions, throwing breakable items, putting out lights, or using the environment to creep past – or even eliminate – their enemies. When it comes to dealing with rats, light is the key weapon, with players using lateral thinking and nearby fires, braziers, lanterns, and even the weather to pick their way through the rodents. These sequences are creepy and intense affairs, with a real sense of satisfaction to their completion.

As the pair journey through the countryside, a very basic crafting system allows for the creation of tools and powders to tip the odds in Amicia’s favour. Light-bombs, small explosives, even sleeping dust can be used in a pinch to evade the bad guys. When all else fails, Amicia is armed with a crude sling, and woe betide any soldier who takes her shot lightly, lest they find a rock embedded in their cranium. By best selecting their path through danger, utilising all available options, Amicia must guide the duo to safety. 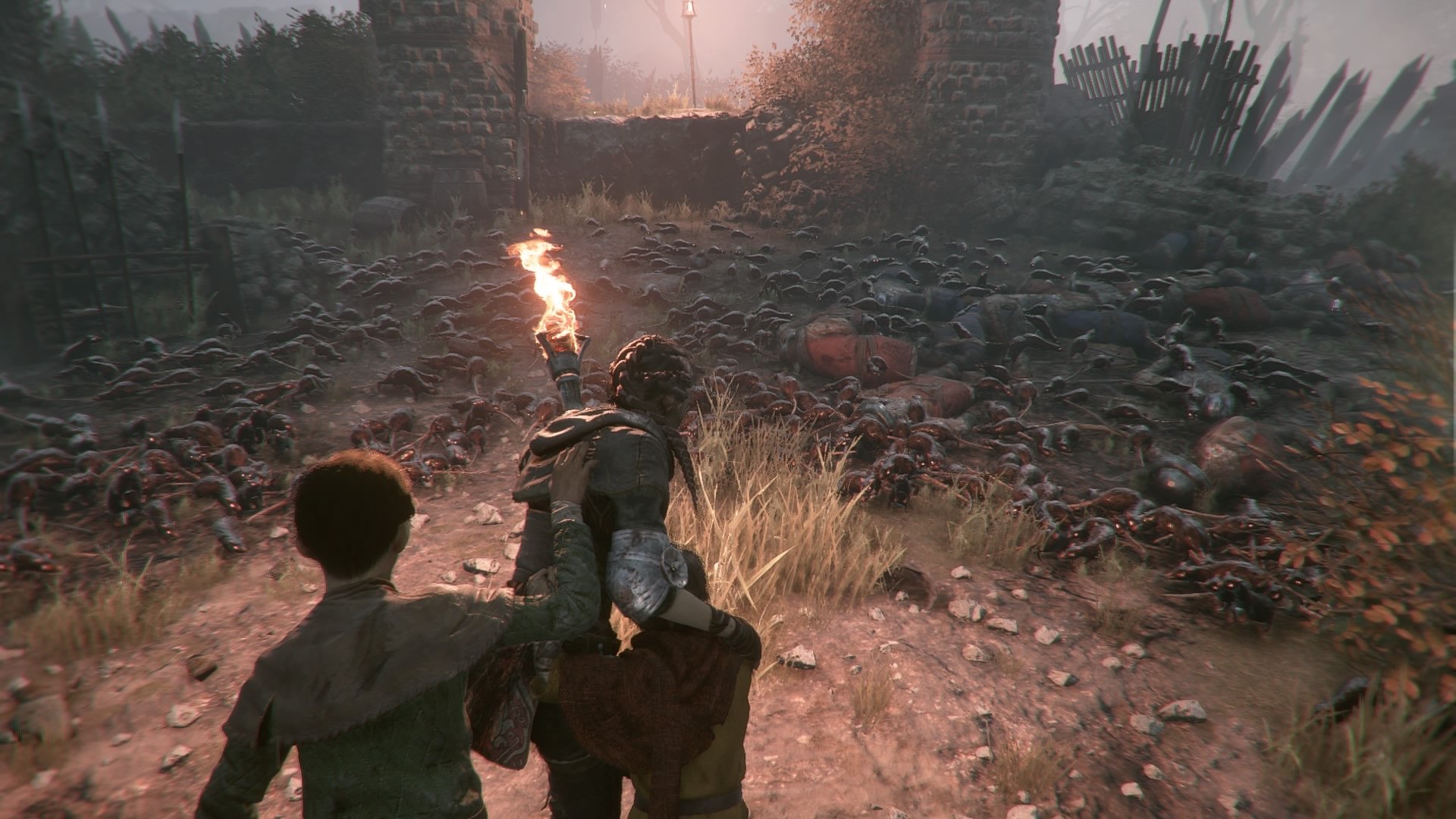 Stealth in gaming is not everyone’s bag. It can be a slow-moving, even tedious affair. To combat the linearity, A Plague Tale keeps players involved with brilliant characters, believable dialogue, and genuinely affecting moments of pathos, friendship, and cruelty. In the downtime between action, Amicia, Hugo, their companions – and enemies – engage in mature, realistic conversation, dialogue that truly brings the cast to life. The voice-acting (I played the game in French and I strongly recommend players do likewise) is touching and nuanced.

Hugo’s childish inquisitiveness is realistic, not corny. Conversation is natural, flowing often and yet, just as importantly, A Plague Tale knows when not to say anything at all, allowing the visuals to carry the weight of the drama. Music also plays an important part, with a string-heavy score used to great emotional effect, while fast fiddling accompanies the encroaching rat army.

Every game can’t be God of War in the looks department, but A Plague Tale makes the most of its resources, going beyond its limitations to offer luscious forests, warmly lit churches, and beautiful strolls along babbling brooks. At the other extreme, Amicia is dropped into dark slums filled with festering corpses, post-war battlefields, and frightening underground dens, with tiny eyes peering from every nook and cranny. A Plague Tale creates a unique setting, which succeeds in delighting and disgusting in equal amounts. Character models themselves have impressive textures, even if certain animations are undeniably janky.

Aware that the story is its ace-in-the-hole, A Plague Tale chooses not to get bogged down in the details. Game design is streamlined, minimising time spent in menus, and removing entirely the option to gallivant off on side-quests. This allows the player to focus on the urgency of the story’s dramatic weight. The trial of the De Rune children – and how it shapes them as people – is emotive and heartbreaking. The pair are forced to grow up fast, leaving behind their noble heritage, and resorting to morally-dubious acts in order to preserve the lives of themselves and those around them. 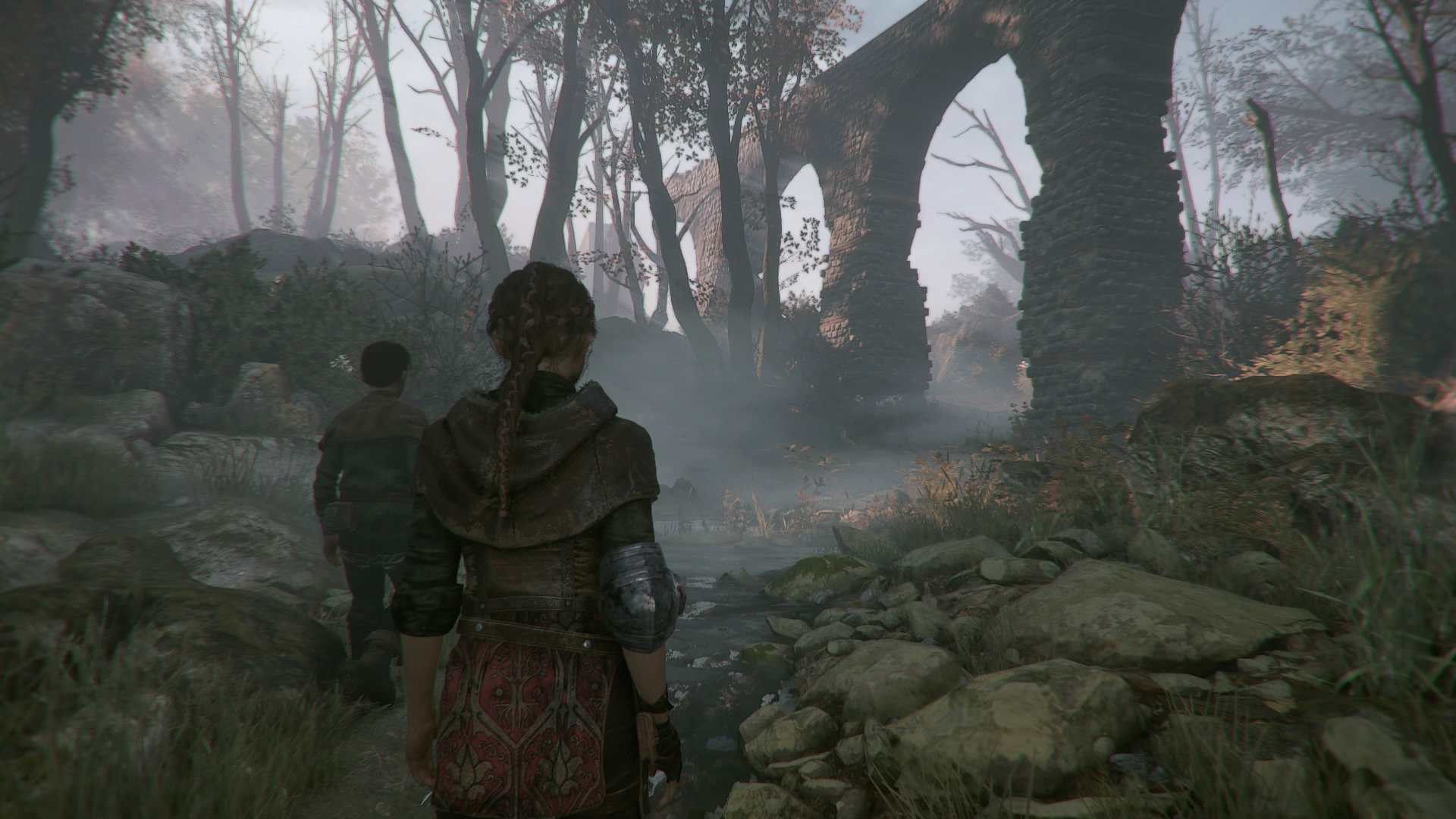 Ultimately, at the heart of A Plague Tale lies a standard stealth-adventure, no more or less. But this overly-familiar action is so perfectly balanced in itself, so lavishly staged, and given such purpose through its characters’ ongoing plight, that to not see this unlikely party of heroes through to their dramatic end seems almost impossible.

A Plague Tale: Innocence is a grim, gripping, and fantastic adventure. The solid stealth gameplay offers little new, but the unique setting, affecting characters, excellent dialogue, and oppressive atmosphere more than redress that linearity. Add to this a lean design, an emotive score, and a commitment to narrative focus, and A Plague Tale deserves to be heralded as one of 2019’s very best adventures.