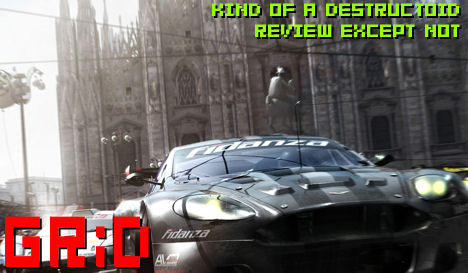 Shut up, it can be done! I was kindly invited to Birmingham’s Omega Sector this past Friday to indulge in an afternoon of GRiD, the latest racing game from Codemasters. The only catch is, it was review code and we were under embargo until Monday morning. These were the problems I was faced with —

Determined not to waste your or Codemasters’ time, I chose to soldier on with a review based upon the brief amount of play I was able to have with it. I generally won’t review a game until I’ve had at least three days with it, preferably a week, but let’s see if we can make this work. Due to the circumstances and the fact that racing games are not my thing at all, this review will be ungraded. Hit the jump for the full story.

GRiD is a racing game. You can tell this because it has many vehicles, known as “cars,” which move really fast on wheels with the aim to be better at being fast than other cars. I was able to ascertain this quite swiftly from the outset of the game.

The main aim of GRiD is to crash into lots of walls and pop your tire so you spend the rest of the race holding down the analog stick to avoid driving in circles. This can happen very early on in the game and the race will become practically impossible. However, the game has an innovative feature known as the “pause” feature, which offers the option to “restart” the race. I found I was the best person out of everybody there at restarting races. I was able to do it more than anyone.

If you are a traditionalist, you may want to actually try and win races. If you do this, be prepared to not crash into walls or accidentally drive onto grass and spin around in circles. When trying to win a race, I found it quite frustrating because I was so good at the wall crashing, grass driving stuff. The trouble is, it’s so easy for the car to become uncontrollable, especially as GRiD is part of the new “let’s make our cars skid around a lot and call it realism” fad that seems to be gripping driving simulations.

Frustration can be tempered with what I call the “Prince of Persia in a car trick,” a feature that allows you to rewind time if you completely ruin your vehicle. You can do this without wrecking your car, but only for a ridiculously brief amount of time compared to the amount of leeway you have if you’re totally wrecked. This means that if you spin out one too many times or pop a tire, you might as well restart.

Unfortunately, GRiD does not come packaged with your very own Wardrox, as watching Wardrox’s little Northern face as he played the game and crashed into things was one of the most entertaining facets.

We got to play a multiplayer match over LAN, and I heroically came in last place on one race because I did not understand what was happening. There is a really neat GPS-style map in place, but I did not pay attention to it so I could lose the game (I did this on purpose to test out the “lose physics”). I was winning in the first race, but then crashing happened and I lost. Wardrox may tell you he won the second race and got a free GRiD T-shirt. Wardrox is a liar.

One of the game’s biggest selling points is the way it looks, and it certainly looks sexy. So sexy, in fact, that one eager reviewer actually attempted coitus with the game, a sickening farce that ended up with him being escorted from the Omega Sector, shamefaced and with trousers around his ankles. Another of the attendees, wearing a Gametrailers shirt, was taking pictures of the PlayStation 3 version of the game, marking the most dynamic crashes as Xbox 360 shots and twirling a villainous mustache, proving that there is indeed a worldwide conspiracy against the PS3. CONFIRMED!

GRiD is a solid arcade racing game that should please fans of the genre while not making many new converts. There’s a lot of content there, and the different selection of cars and race types should keep people playing. I especially liked how you get at least a small reward simply for completing the race, relieving the pressure to constantly be first. There are bonus goals within each race too, for those looking to score big money. Overall, GRiD is something I’d recommend to hardcore racing fans. I am not a hardcore racing fan though. I do not recommend this game to myself, and instead recommend porn.