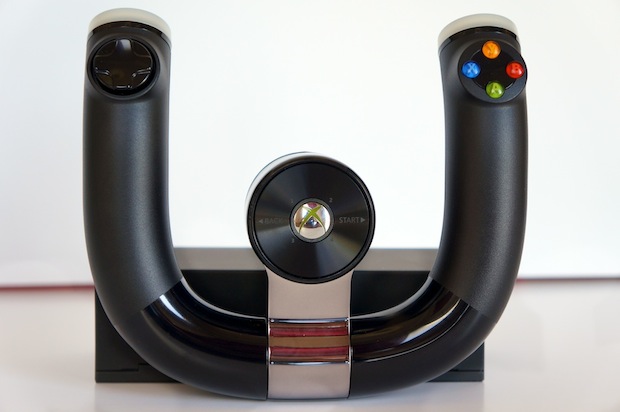 Do you remember that strange U-shaped wireless wheel at E3? Microsoft calls it the Xbox 360 Wireless Speed Wheel. Even though I first thought it looked like a Wii accessory, I found out then that it’s actually quite a bit more useful than it initially appears to be.

Now I have one in the office, and I’ve been able to put it to a proper test with several racing games. It turns out that air steering works pretty well!

The Xbox 360 Wireless Speed Wheel…isn’t really a wheel. It’s a wireless, motion-sensing, U-shaped controller that works through feedback. You simply turn it on, hold it up, and make in-the-air steering motions like you did on the playground in your little toy truck back in the day.

Does it work? Yes, and it’s actually quite responsive. I was able to negotiate everything from subtle bends to sharp turns easily, with no issues. The wheel held up fine even in high-speed races in Forza Motorsport 4. In fact, it seems to work for every racing game. I tried an older game, Dirt 2, and the game just seemed to know that the wheel was the controller, and worked fine with no setup required. Sega Rally Revo worked exactly the same way.

The controller layout is pretty strange, but it works. On the left you’ll find the four face buttons for navigating the interface. They’re a lot smaller than your standard Xbox 360 controller buttons, but I had no issue with them. In the middle you’ll find a round hub, where I suspect all the motion-sensing tech. Here is where you’ll find the Xbox button, as well as the Start and Select buttons. 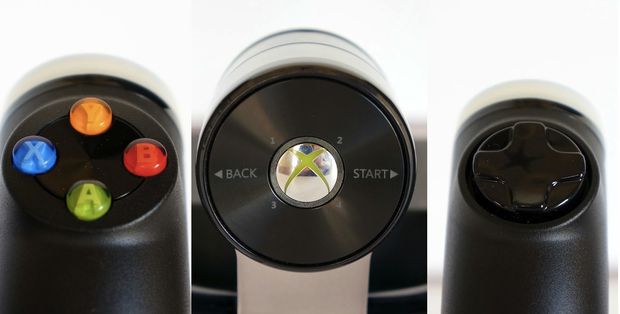 Shifting? The right hand grip is where the d-pad is placed. You’ll have to use this pad for shifting gears in manual shift mode, as the controller has no L and R bumpers. I love that paddle shifter feel you get with the standard controller’s L and R bumpers, but there likely wasn’t a good way to work those into this controller’s design. The d-pad works, but it’s not quite as fun.

Gas and Brake are controlled by two really nice analog triggers. They’re curved enough that you never feel like you’re going to lose grip, which is nice in a tense race. The long travel time on these triggers means that you can be very precise in your gas and brake motions. They work very well. 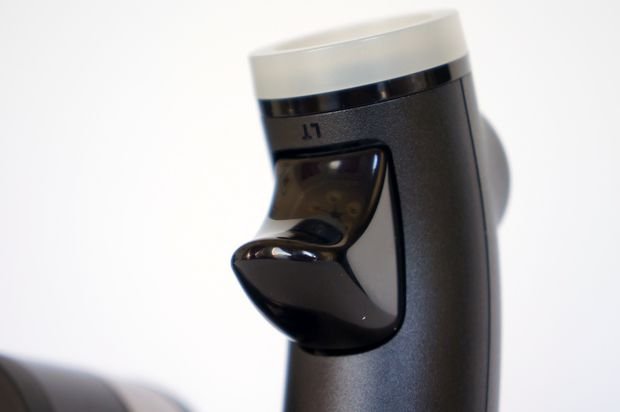 As for the rest of the wheel, on the very top of each side of the “U” you’ll find translucent rings. They…light up. Microsoft says that these lights can be programmed for different uses, but they serve no real purpose. On the back, right under the round hub, you’ll find a controller sync button, and directly under that, on the bottom, you’ll find a port where you can insert two AA batteries. 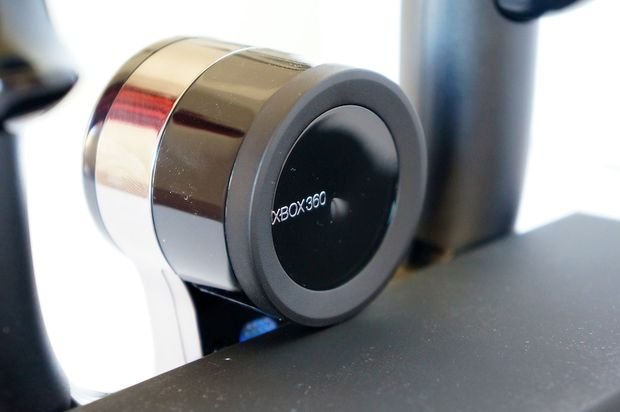 The best part about this wheel? No mounting or wires or any of that nonsense. Any in-air vertical placement is fine, meaning that you have plenty of room to whip the wheel around like a crazed driver when you hit a sharp corner too quickly. I love that you can feel free to relax on your couch, put your feet up and cruise.

That’s kind of the point with this wheel — simple fun. It’s not a steering wheel replacement, and it’s not really trying to be. Sure, you won’t have the benefit of dedicated pedals, but this controller’s nice analog triggers will get you most of the way there. And air steering, much like air guitar, proves to be pretty fun. Would I use the Xbox 360 Wireless Speed Wheel in my most critical Forza 4 races? No, but after the race I’d definitely pick it up to take virtual versions of my dream cars for a spin.