Despite the Sonic series’ many missteps over the past decade, I remain a huge fan. I remember the first time I played Sonic The Hedgehog at my cousins’ house into the wee hours of the night. I remember long school field trips and borrowing my friend’s Game Gear to play the Blue Blur’s latest handheld quest. I even remember designing zones of my own design on large sketch pads!

The History of Sonic The Hedgehog is a celebration of the SEGA mascot’s two decades of speed-driven platforming. First released in 2012 by French videogame book publisher Pix’n Love, it was translated by Canadian comic and art studio UDON for English market distribution. For a long-time fan such as myself, securing a copy was a necessity.

Quite a few Sonic faithfuls were also eager to pick up the 300-page volume, as the first printing had one of the fastest sellouts in UDON history. And why shouldn’t they? Featuring a chronicle of Sonic’s *ahem* genesis, a list of all the games in the massive franchise, and bios for Sonic’s motley crew of allies and enemies, The History of Sonic packs more punch than one of SEGA’s old anti-Nintendo slam ads. 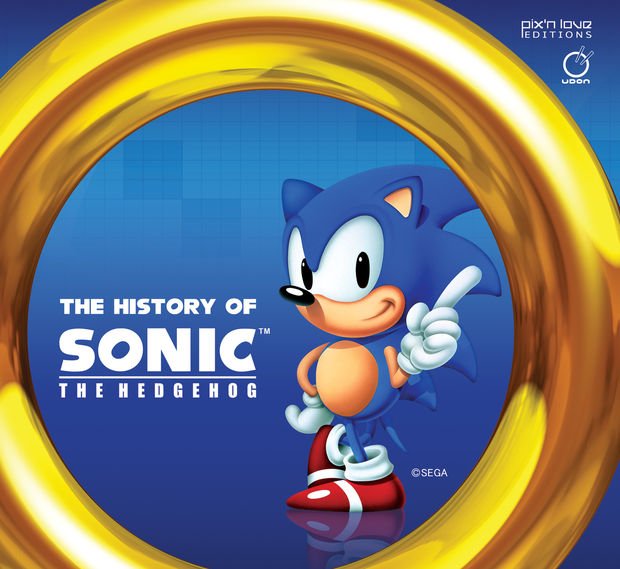 Sonic The Hedgehog. The “The” is supposed to be capitalized. According to former SEGA of America head of marketing Al Nilsen, Sonic “was not just a hedgehog, but THE hedgehog” and that the three-letter article was essentially the speedster’s middle name.

Sonic’s rise to fame is filled with many such wonderful bits of trivia, compiled from various print sources, interviews, websites, and documentaries over the past 20 years. A lot of the info is readily available knowledge, but you are still likely to trip over an obscure factoid now and then.

The book itself is your archetypal coffee-table tome — a thick hardcover binding that measures an almost square 9.25″ X 8.5″. Greeting you on the front is a classic-era Sonic, encircled by an iconic gold ring, while the reverse side plays host to Sonic’s modern incarnation. Not that I really care one way or another who gets what spot on the cover, but I’m sure many of you will pleased that ol’ daddy long legs was shunted to the rear.

Flipping through the pages, however, you’ll notice that the text and images have been laid out in a way that treats each two-page spread as a single “widescreen” page. This gives the book a much more expansive feel, and considering that Sonic’s claim to fame is racing across wide open spaces, the design is quite appropriate.

Oh, and there’s a 16-bit sprite flip animation in the bottom-right corner. No biggie, but those always add an amusing touch.

As mentioned already, The History of Sonic is split into three major parts: a written account of the Blue Blur’s career, a listing of nearly every Sonic series game, and character bios and artwork. Inserted at the very end is a tiny section devoted to Sonic’s cameo appearances in SEGA-developed software — oddly enough, Sonic’s very first appearance in a videogame was not in the original Sonic The Hedgehog but rather in the arcade racer Rad Mobile as a rear-view mirror tchotchke!

Sonic’s history is tied directly to that of his parent company, thus the book first explores the founding and early years of Service Games, known today as SEGA. We are also reacquainted with Sonic’s predecessor, Alex Kidd, who failed to be the Mario-killer SEGA hoped for.

Sonic is actually quite the anomaly when you think about it. Other attempts to best a popular videogame franchise — so-called Zelda-killers, Halo-killers, and the like — tend not to live up to the hype. In Sonic’s case, he was carefully and meticulously constructed to be the “anti-Mario” in every way, but the planets aligned and he almost single-handedly helped SEGA pull a large chunk of market share away from Nintendo.

Another thing that fascinates me about Sonic’s conception is how, much like in other games from the early ’90s and prior, many key design decisions were made based on the capabilities of the hardware. Sonic rolls into a ball so that jumping and attacking could be accomplished by a single button. Sonic is dark blue because his former sky blue color scheme caused him to be camouflaged when standing in front of similarly colored backgrounds. And Sonic has very prominent spikes because they offered the illusion of speed.

The SEGA hardware years give way to the company’s current role as a third-party developer, and Sonic’s continued developments are detailed up through his team-up with Mario in the Mario & Sonic at the Olympic Games series, bringing this tale around full circle. Capping off the history is a trio of interviews with Yuji Naka, programmer on the first Sonic The Hedgehog and the most famous Sonic Team member of all; Naoto Oshima, graphic designer who actually gave birth to Sonic; and Takashi Iizuka, series artistic director since Sonic Adventure.

The history does an excellent job of walking us through Sonic’s game career, but I’m nonetheless disappointed that there was next to no discussion of his ventures in other media. A major reason for Sonic’s popularity in the ’90s was his omnipresence — from Macy’s Thanksgiving Day Parade to cans of spaghetti — so it seems odd that his four cartoon shows, one Japanese direct-to-video animation, and the Archie and Fleetway Sonic comics would only be mentioned in passing. Not going behind the scenes on those projects feels like a missed opportunity.

The games list section, which covers all the franchise installments from the original Sonic The Hedgehog in 1991 through Sonic Generations in 2011, is broken down further into 2D era, 3D era, handheld excursions, and spin-offs. Major titles are naturally given more real estate than, say, the Sonic Café series of cell phone time-wasters, but every entry is accompanied by screens and box art, release information, brief synopses of the games and their market impact, and extra trivia you can use to impress your friends.

For example, Sonic can throw Hadoukens in Sonic Chaos on Game Gear. I did not know that!

Though even the strangest of Sonic’s outings are covered, there is a small handful of curious omissions. I’m specifically talking about the compilations like Sonic Jam on Saturn — the game.com version gets an entry, however. In Sonic Jam‘s case, its “Sonic World” environment served as the prototype for Sonic Adventure, so you can’t say it didn’t play a major role in the grand scheme.

I also would have loved concept art for cut levels and other cutting-room-floor materials, such as the four axed zones in Sonic The Hedgehog 2. And if you were hoping for a straight answer on the whole Michael Jackson-Sonic 3 music connection, keep looking elsewhere.

The character section is the most straightforward of them all, providing short biographies for most of the key players as well as their various art designs. Only characters that have had prominent roles in the post-Sonic Adventure era are present, so be sure to pour a 40 for forgotten third-stringers like Mighty the Armadillo, Ray the Squirrel, Nack the Weasel, Bean the Dynamite, and Bark the Polar Bear.

A scant six pages are dedicated to artwork of Badniks and bosses, which makes this the laziest portion of the whole book. Only 11 games are represented, and only two or three enemy designs are presented for each, which makes the entire section about as comprehensive as any one of the friggin’ Genesis game manuals!

But The History of Sonic is so rich in lore and insight that it more than makes up for my gripes. I don’t even mind the numerous typographical errors or humorously paradoxical character stats — Knuckles is noted as the same height as Sonic (3 feet, 4 inches), yet on the very next page, there’s a chart that clearly states Knuckles is taller.

There is a delightfully optimistic tone throughout the book, even while discussing the less-than-stellar chapters in the Sonic saga — I’m looking at you, Sonic 2006! I find that to be quite reflective of the Sonic fanbase, but in a good way. We know the series isn’t the most consistent in quality, but ol’ Mr. Needlemouse was once on top of the world, so there’s no reason why he can’t make a comeback as long as the passion remains.

The History of Sonic The Hedgehog is must-read for the diehards and lapsed fans. We may be unsure of where Sonic is heading, but I think we can all admire his storied journey.