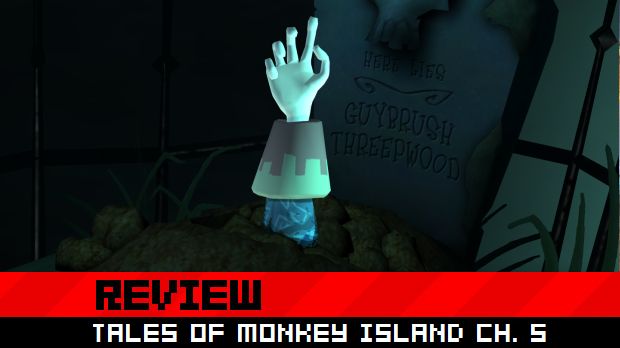 Guybrush Threepwood is dead; long live Guybrush Threepwood. Thrown into the underworld and seemingly powerless to stop the forces of piratey evil , the fifth Tales of Monkey Island chapter, entitled Rise of the Pirate God, sees our bumbling hero tasked with sealing a rift in time and space, saving his beloved Elaine, and defeating an all-too-familiar evil.

Telltale season finales have been somewhat unpredictable, historically speaking. Sam and Max‘s second season had a pretty good ending, as did Wallace and Gromit, but the Strong Bad finale was undeniably subpar, and even Sam and Max‘s season two finale couldn’t match the brilliance of its penultimate episode.

Where does Tales of Monkey Island fall on this scale? Does it bring all the series’ unanswered questions to a satisfying close, or does Guybrush Threepwood’s latest adventure end with a disappointing thud?

You’ll have to hit the jump to find out (mild spoilers for the entire series). 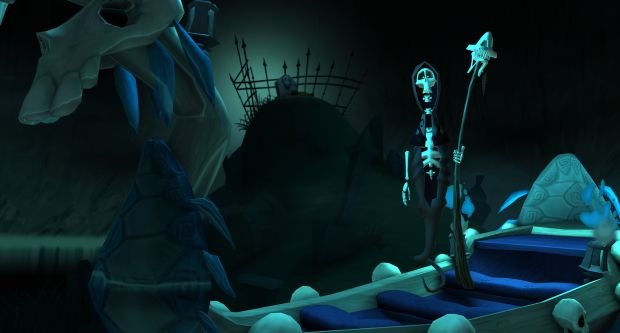 The TMI season finale isn’t spectacular, but neither is it terribly awful. Taken as a single episode, it’s equally as good or bad as the majority of the other chapters; like chapters one and four it’s got a few cute jokes, a few genuine laughs, a few unfunny gags, and exactly one or two relatively challenging puzzles. It’s not as funny as chapter three, because Murray isn’t in it, and it’s not as (in my view, frustratingly) challenging as chapter two, because most of the puzzles are limited to small, enclosed areas, a la Zack and Wiki.

Actually, it’s worth pointing out that narratively, Rise of the Pirate God, does something really quite interesting that I’ve never seen a game sequel attempt to this degree: it completely and intentionally inverts its own cliches. Remember how a bottle of root beer defeated LeChuck in the very first Monkey Island game? Well, with Guybrush now an official member of the ghostlike walking dead, guess what awaits him everytime he steps aboard LeChuck’s infernal pirate ship? A quick blast of root beer to the face, and Guybrush is sent tumbling back into the underworld. Later, Guybrush finds himself taking possession of his own rotting corpse, thus becoming the exact sort of ghost-pirate-zombie that LeChuck terrorized the Caribbean as in the LeChuck’s Revenge (I was disappointed to see that Guybrush never turns into a demon with flaming facial hair, but as I am evidently the only person who really liked Curse of Monkey Island I can’t gripe too much).

These narrative reversals are kind of interesting, in a “heh, that’s kind of interesting” sort of way. As neat as they are as fan service, however, they never really enter the actual puzzle-solving in a truly interesting way. The compliment swordfighting is great, but it’s a 30-second puzzle; that and the narrative aside, the rest of the episode functions pretty much exactly like the other chapters. Not that this is necessarily an awful thing — the game doesn’t need to suddenly turn into a brawler or something just because Guybrush becomes immortal — but season finales are generally meant to go off with a bang, and Rise of the Pirate God simply does not. 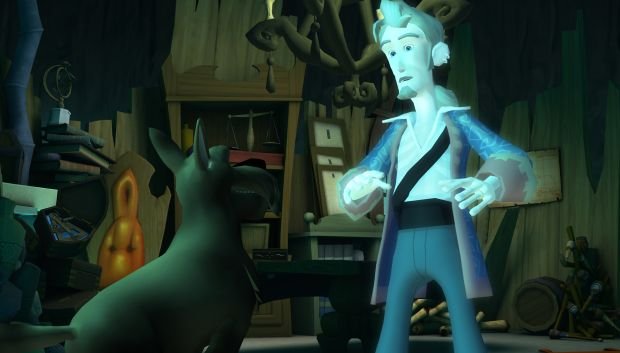 Oh, LeChuck is dispatched in a pretty cool way, and swordfighting duels are had, and there’s an epic-when-described-in-words-but-not-in-actuality because-the-Telltale-engine-can’t-render-more-than-a-dozen-characters-at-a-time-and-the-music-isn’t-operatic-enough pirate ship battle, but Rise of the Pirate God just doesn’t quite feel like the awe-inducing finale it wants to be. Too much is left unanswered. The Voodoo Lady’s ulterior motives have been built up and frequently referenced over the final two episodes, but we don’t know any more about the supposed thread of fate that links she, Guybrush, and LeChuck at the end of the episode than we do at the beginning.

Given the post-credits epilogue, it appears Telltale is going in the same direction we’ve seen so many big-budget titles go in recent years; in other words, You’ll Have To Buy The Sequel To Find Out What The Hell Is Going On. As the Voodoo Lady’s plans represent the only truly interesting mystery in the season (apart from “has LeChuck really reformed,” which was satisfyingly answered in episode four), I was really disappointed to find the end credits roll without so much as a hint of the Voodoo Lady’s ultimate plans.

Does Rise of the Pirate God tie together the disparate threads of the other four Tales of Monkey Island chapters, combining them to form an epic finale that outdoes all the other chapters in terms of both gameplay and narrative impact? Not even remotely. Is it exactly as charming, and occasionally hilarious, and fanservice-y, and occasionally unfunny, and sometimes-challenging, and relatively satisfying as the other four chapters in Guybrush Threepwood’s latest saga? Absolutely. It’s not an ideal finale, but in some ways it’s an appropriate one: it exhibits every strength and every problem from the series as a whole, almost serving as an emotional summary of the season itself.

When all is said and done, I have to admit: I’m happy Tales of Monkey Island exists. It was a pleasure to reunite with my old friends, even if not always under the best of circumstances. I had fun teaching LeChuck how to solve puzzles and compliment swordfighting with a headless ghost, even if these little ironic moments didn’t last as long as I would have liked. I’m sure I’m alone in this, but I even liked Morgan LeFlay, and her complicated relationship with Guybrush.

Yes, many of the puzzles were kind of underwhelming, and yes, some of the most dramatically important scenes were severely undercut by Telltale’s technically limited engine (the episode 4 finale is so almost-incredible it actually hurts), but hey — it’s Monkey Island, man. A pretty significant part of me can’t help but love it, despite all its flaws.