Sam Fisher has lost everything. His daughter is dead, the country he gave his life to has abandoned him, and the organization he believed in has betrayed him. Basically, he’s enjoyed better days. Despite having left his old life behind, Fisher finds that the past is hard to let go of, and quickly finds himself embroiled in a plot that will see him save America from terrorism and claw back his own redemption into the bargain.

Splinter Cell: Conviction has had a long and winding journey. After many delays and more than a few stylistic overhauls, Sam Fisher is finally back to rid the world of evil and break necks in the dark. The game has changed dramatically since it was originally announced, with both the aesthetics and gameplay seeing considerable alterations. Were these changes for the best? Has Conviction been helped by such a huge directional shift, or has it been hindered? Has Fisher truly returned, or is it time for this old agent to admit he’s washed up?

Find out as we review Splinter Cell: Conviction. 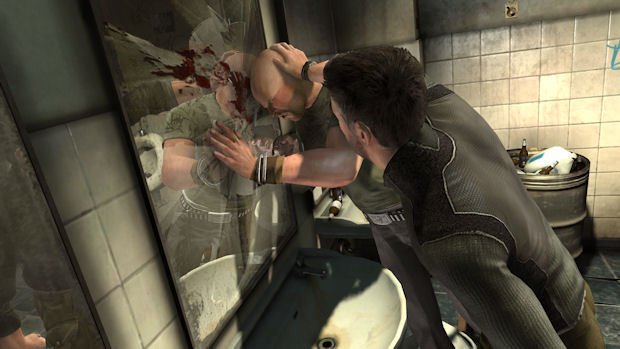 If only one word could be used to describe Splinter Cell: Conviction, it must be this: Stylish. The latest installment in the Splinter Cell franchise drips style from each pore on its metaphorical body, and it’s clear that presentation is everything this time around. Aesthetically, Conviction stands out with some incredibly facile yet brilliant visual cues, and seamless transitions between full gameplay and quasi-interactive cutscenes. From beginning to end, Conviction is sleek, sexy and piles on the drama like you would not believe. Even more amazingly, this game has all the substance to back up its aesthetic frills.

The similarities to 2009’s Batman: Arkham Asylum cannot be denied. Much of Conviction is spent toying with the same predatory flavor of stealth that Asylum perfected. However, this is no bad thing, as Conviction is every bit as empowering as Batman was, and even manages to throw in several new gimmicks and gadgets to keep things fresh. In fact, Conviction does the impossible by making the player feel like even more of a badass than Batman did.

While lacking The Bat’s acrobatics, Fisher’s ability to prowl in shadows, drop from pipes, drag enemies from windows, and perform instant executions will provide everything he needs to completely screw over the baddies. Fisher can use noise to lure enemies out, or give away his position and flank the enemy while they eagerly shoot in the direction they last saw him. As they uncover fallen comrades, they get progressively more scared, holding their positions and hurling abuse at Fisher while trying to mask their evident terror. One by one, they drop like flies, until you have one terrorist left, and putting the final boot in is always immensely satisfying, knowing you successfully pulled the strings of an enemy army, led them into your traps, and systematically eliminated the witless fools. 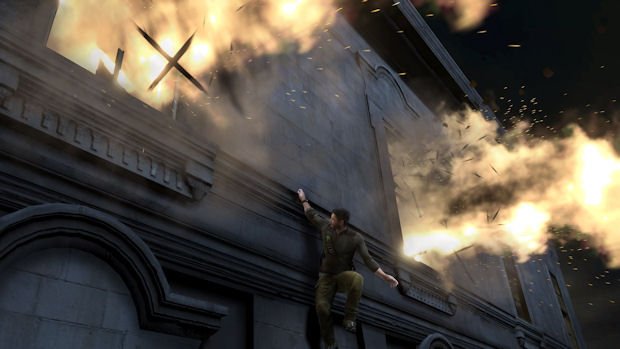 Spatial awareness is key to success. Shooting out lights to create shadows in which to hide, ducking out of windows when necessary, and making use of various environmental traps are all key. If all else fails, the game also boasts a robust cover mechanic which will let less stealthy players attempt to win through sheer brute force. Clever players will make use of various gadgets, such as EMP grenades to short out electrical devices, or sticky cameras that can create distractions and give Fisher an extra angle on the environment.

Sam is helped along in his mission by the new “Execution” attacks. Whenever Fisher draws close to an enemy, he is able to instantly take them out with a brutal physical finisher. Whenever players earn a close combat finisher, they get “Execution Trophies” that allow them to instantly kill a number of enemies at range. In order to execute, Fisher marks his desired targets and players can then take them down with the touch of a button. It’s a wonderful new addition to the game that works better than it sounds and ensures that players seek a healthy balance between stealthy sneaking and methodical shooting. It switches up the gameplay by lending a more tactical feel to the combat. If only half the executions didn’t see Sam shooting bad guys through walls, it would look pretty damn cool as well.

Speaking of cool, we also need to talk about the “interrogation” scenes. Fisher will grab certain targets during the climax of some chapters, and force information from them in violent ways. While they are little more than vaguely interactive cutscenes, where players press a button and let Sam do the rest, these segments are still amazingly brutal and it’s great fun to watch some villains get smashed into urinals and bashed upon jutting tree bark. There’s only one minor gripe, in that the dialog feels very forced. After you’ve had your face put through a mirror, you’re not then going to invite more brutality by refusing to answer the next question, and you certainly shouldn’t act surprised when your face goes through another mirror. 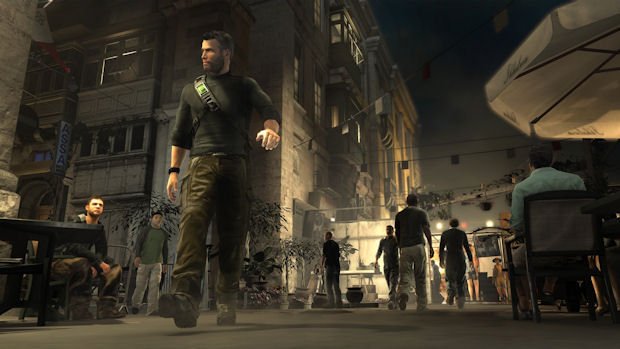 Overall, the gameplay is consistently terrific, with the only real downside being how long some of the sections can be. Sneaky players can take a long time to deplete the enemy forces, and if they make one mistake, Fisher can die pretty quickly. A lot of hard work can go to waste, and a few of the checkpoints are put in bad places. There are also some frustrating and ill-advised puzzles in the latter half of the game that slow things down to a crawl. Neither of these gripes truly harm things in the long term, but the slow and overdrawn periods can certainly put a damper on the player’s enjoyment for brief periods.

Nevertheless, Conviction is still an absolute blast. The versatility, both in terms of stealth options and the large assortment of unlockable weapons, means players will always find some cool new way of approaching an objective. The more unique missions, such as a flashback chapter set in Iraq, and a very cool escape section after the game’s major revelation, keep events feeling even more varied. By the time Conviction finishes, only the most demanding player won’t feel like they’ve been on a rather awesome ride.

The aforementioned visual presentation, however, is by far Conviction‘s strongest suit. From the transition to black-and-white graphics when Sam’s in shadow, to the way in which mission objectives and plot points splash across in-game surfaces to create a dynamic and visually striking approach to player feedback, Conviction is a slick and showy game that manages to impress the eyes with very simple ideas. Ideas so simple, in fact, that they become inspired and make one wonder why we haven’t seen them before. 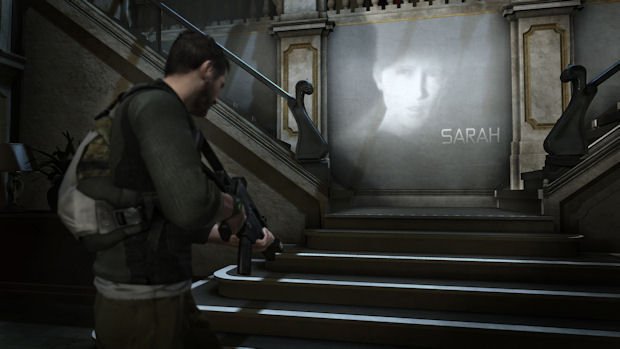 It’s a real shame, then, that such excellent presentation feels almost wasted on a plot that is, by and large, shallow and forgettable. The characters are not fleshed out in the least, no matter how many times the game tries to tell you that they are all conflicted and angst-ridden. Fisher himself doesn’t feel very humanized, and even during sections where the emotional tension is supposed to be running high, it’s hard for the player to feel too invested because those scenes were not built to particularly well. It’s sad, because it’s all packaged so beautifully. It’s just disappointing that the villains barely feel villainous and the heroes barely feel like real people.

As well as the single-player campaign, players can take part in a selection of “Deniable Ops” bonus missions and an impressively robust co-op mode. In co-op, two players work together in a variety of game types. Working together to execute enemies, create distractions, and draw enemy fire is amazing fun, and should help bolster the somewhat short campaign and provide as much replayability as gamers need. There are a number of game modes, including a versus stage where players do battle amidst waves of enemies. The online is surprisingly good, and if you enjoy the single-player campaign, there is no reason not to love the co-op stages. 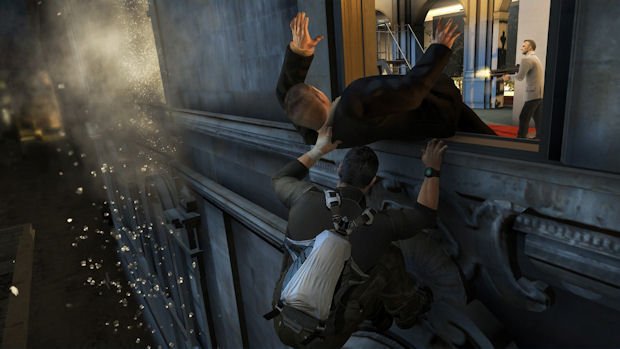 Splinter Cell: Conviction is a thoroughly great game, and should definitely be purchased by stealth and action fans alike. Gratifying predatory battles, a unique visual exhibition, and a variety of engrossing game modes make Conviction an absolutely solid experience that nobody should feel disappointed in. Splinter Cell is most definitely back, and I sincerely hope that this latest installment represents the future of the franchise.