If you have an iPhone, you may have played Space Invaders Infinity Gene when it came out late last year. Why are we excited about a port then, you ask? Why, HD, of course. That, and the ability to use a gamepad rather than your iPhone’s touchscreen. Kind of brings the whole experience from “awkward” to “awesome” (although I do admit the iPhone version is really good for a no-controller game). And since I am an admitted addict to downloadable content, I volunteered to be the first to lay my mitts on this stylish new version of the game.

Based on the concept of evolution, Infinity Gene opens with the iconic intro level to the game you remember from the arcade, but soon morphs into an entirely different animal, challenging the player to earn upgrades and eventually go sailing from a flat playing field into a three dimensional world of brilliant vector-levels. Sound like your cup of tea? Hit the jump, and we’ll help edge you towards your own evolution.

I remember the first time I played Space Invaders Extreme 2 on my DS — I was not remotely convinced that it was going to hold my interest. Until I heard the music, that is. New design goes a long way for these iconic games. Infinity Gene performs in a similar manner when it comes to bringing something new to the table, not only providing solid music but gorgeous new graphics to complement it. 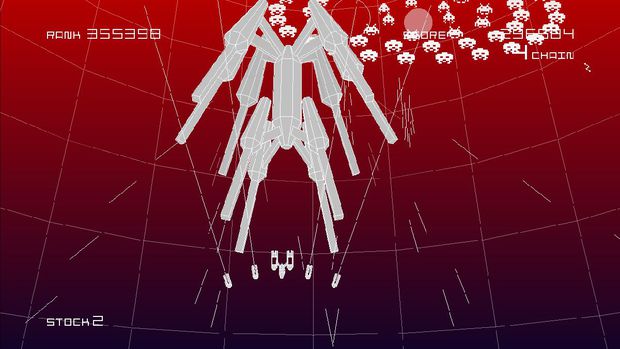 To start off, your ship will only be able to move left and right, but as you blast ships and rack up points, you’ll fill up a little meter at the bottom of your screen. Once you fill it up all the way and finish a level, you’ll get a cool little white flash and the screen will say “EVOLUTION”, making you feel super accomplished and kind of like shaking your tailfeather a bit. Its so Darwin up in here, yo.

One of your first unlocks is full screen movement, which is cool in that it does really make you feel as if you are watching the classic arcade game evolve into something new — a cool feeling for a gamer that’s been around as long as I have. It only gets better from there, though. As you complete each level, you’ll see a little growth tree that fans out its branches and shows you your progress. If you unlock anything special, you’ll see that here too.

As you blow things up, you’ll notice little gene clusters floating around the screen. Grab them to make your weapon more powerful. If you get hit they’ll fly all over the screen, but you have a chance to chase them down before they vanish, which is another feature of the game I really love. 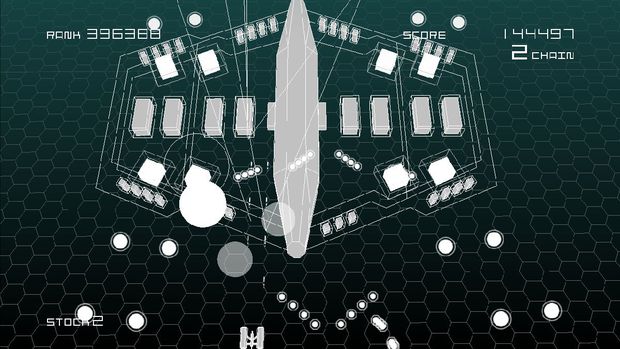 The console version of the game offers several upgrades the iPhone version does not have, such as additional weapons, an increased lives limit, unlockable bonus stages and music. Of course there are leaderboards as well, but the new modes distracted me from them for a while. My favorite was the Music Mode, which will generate stages based on the music you have stored on your PS3 or 360. I tried this with some wacky stuff such as Vola and the Oriental Machine’s new album Principle, and I had some serious fun watching the levels it came up with. A Challenge Mode is also available, which is 99 challenge stages — ought to keep you busy for a while. 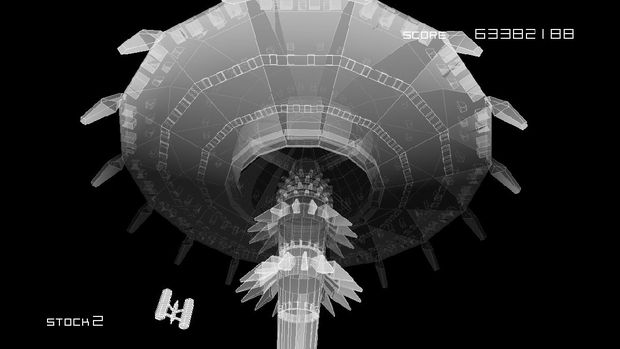 There are times in the game when the monochromatic imagery suffers that same issue as the iPhone version did. You’re not always sure what’s going to kill you and what’s just a part of the constantly moving design, but then again, its hardly a design flaw — it just means you’re going to have to play the level through a few times before you get fully acclimated. The levels are very short at first, but you’ll see a serious ramp up in difficulty by the time you get further in. 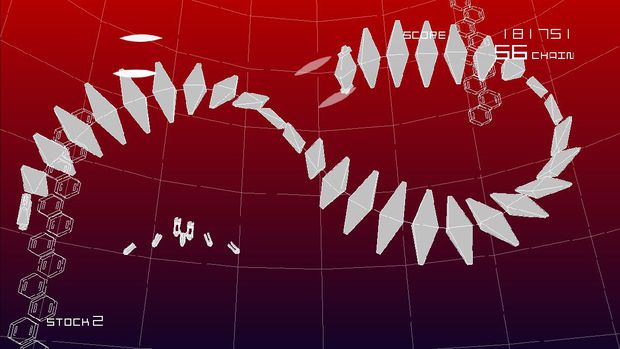 Blasting bosses also seems quick at first, but don’t worry … you’re going to really like it once you get to the ones that take you more time. The game evolves from simple, bare bones to a full on shmup with bullets flying every which way, and I think you’ll find plenty to both challenge you and keep you coming back. For $9.99, this seems like a pretty good deal to me, and something you’ll be able to get a lot of replay out of.

Score: 8.0 – Great (8s are impressive efforts with a few noticeable problems holding them back. Won’t astound everyone, but is worth your time and cash.)