Ah, Bust-A-Move. No matter how many incarnations of the little game seem to come about, I’m always interested in playing another one and losing myself in that mindless but addictive puzzle action. Naturally, as soon as I saw that Square Enix would be distributing the latest installment in the series, Space Bust-A-Move, I was on the case and ready to check it out. And is that a story I spy?

Yes, in this version you will follow Bub and Bob’s adventures as they go after the evil Develin and try to collect items called Cosmo Bubbles to save the world. Not sure what connection Cosmo Bubbles have to actually saving the world, but you don’t ask those sorts of questions when you play a videogame. You have to defeat Develin, dammit!

Hit the break for more. 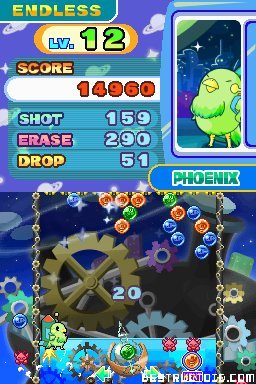 One glance at the cover of Space Bust-A-Move and you can tell this is going to be a ferociously happy little game. After you fire it up, you’ll see you have a handful of single player modes to choose from right off the bat: Story, Endless, Time Trial and Wireless play. First off though, I started with Story. I’m a big fan of puzzle/story hybrids, as evidenced by my consistent passion for Puzzle Quest, and I was hoping Space Bust-A-Move might deliver in the same way.

The story itself really isn’t anything to write home about. Basically, Bub and Bob are hanging out doing whatever it is wee dinos do when a young girl named Snown mysteriously appears and begs their help in finding items called Cosmo Bubbles, which will somehow help to vanquish the evil of a villain named Develin from the galaxy. In other words, an excuse to go on an adventure. It doesn’t ever get more complex than that, but the character art is crisp and pretty, and that was good enough for me. 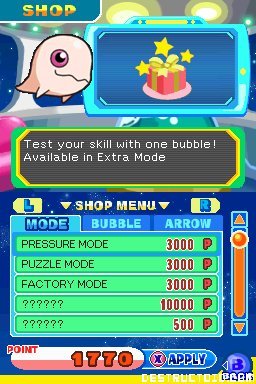 You can use either your stylus or the d-pad to control the level that allows you to shoot your bubbles upward. I far preferred the traditional controls, as the stylus felt a bit slower to me. The puzzles themselves are broken up into five level doses, each of these a separate “planet”. You’ll have three of these per planet to defeat. To get the Cosmo Bubble in each area, you’ll need to break down the bubbles around it in order to get it to fall rather than matching it with like colors. This is an easy challenge at first, but it gets considerably harder as you progress.

After you make your way through the three levels of each planet, you’ll encounter a boss. This was by far my favorite part of any Bust-A-Move game I had ever played. The boss was displayed on the top screen, while you work on the bottom to maneuver around the pieces left on the board and whatever stuff he throws at you. I found this incredibly fun and challenging and found myself motivated to make it through the levels to get to each new boss. 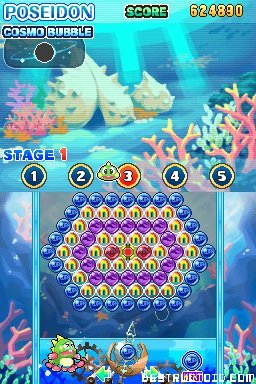 Story level offers a decent amount of gameplay, and you can always replay it to improve your score, but what really impresses about the game is the amount of extra content you get, especially for the price. As you progress through story mode, you’ll earn points which you can later spend at the Shop, which allows you to buy custom bubbles and arrows and extra modes like Pressure mode which require you to clear a level with just one bubble. Add all those unlockables along all the different single player modes, and this game will keep you busy for a while.

Best of all, Space Bust-A-Move is easy to pick up and play, serving up its puzzle fun in bite-sized doses. You can easily play a planet in 3-4 minutes and close your DS. Between the price point and the replayability, I’d say this is a must own for fans of DS puzzlers. It certainly doesn’t break the mold as far as Bust-A-Move games go, but it will be the type of game you can pick up over and over again, and there’s no greater compliment I can pay when it comes to puzzle games.

Score:  8 — Great (8s are impressive efforts with a few noticeable problems holding them back. Won’t astound everyone, but is worth your time and cash.)