For the people who played Roogoo on Xbox LIVE Arcade (the game’s original platform), they discovered a challenging little puzzle game with an addictive multiplayer that could get you yelling at your opponents quite easily.

For those that didn’t play it they missed out. Roogoo is one of those underrated gems that never got the attention it deserved. It’s no Tetris, but it sure is one of the better puzzle games I’ve played in a good long while. Thus I was happy to hear that it would be getting both the Wii and DS treatment, and that more people — and possibly a friendlier audience to its cute look — would be brought to the game.

After a few months wait, Roogoo: Twisted Towers for the Wii finally landed on my doorstep replete with a few new twists to the Roogoo formula. I rushed to my Wii to see if the magic I had felt with the first game was still alive or if, after not playing the game for a decent amount of time, it was past the initial charm. Did I rekindle my love affair, or does Twisted Towers fall flat on its shape dropping face? Read on!

Let’s take a moment to wipe the saccharine sweetness off and move on. 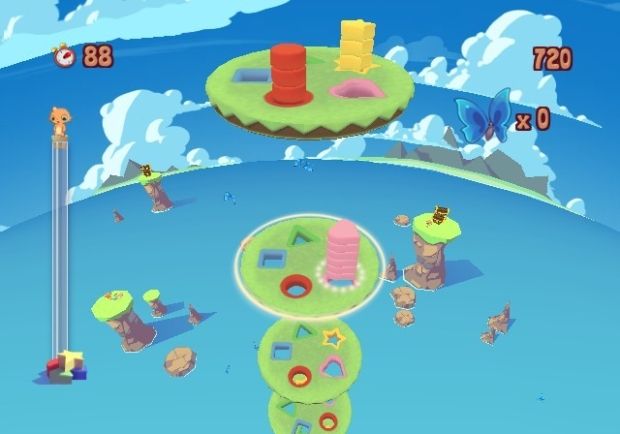 Turns out that magical meteors are actually shapes — square, circle, triangle, star and heart — and they fall from the sky straight downwards. In Roogoo it is your job to rotate platforms that have holes cut out of them in these shapes (like those blocks that you could push shapes into as a kid) so that the pieces which are falling can fall through the holes and thus make it to the bottom. Different platforms have different amounts of meteors that must be stacked in order for the meteors to fall through them. Every time a player’s meteors get stuck at a platform where there are not enough to pass the camera pans back up to the top and the process repeats again until the required amount of each shape reach the last platform. However, if players don’t put the meteors in the right shape — or some evil Meemoo or other obstacle gets in the way — then the pieces fall, and when enough fall it’s game over time. That is the basic gist of the original game and of Roogoo: Twisted Towers.

Of course the levels get more complicated with flipping platforms, Meemoos that block your way, accelerating platforms that speed up the rate at which your pieces fall, levels where the platforms aren’t simply directly below each other and a host of other obstacles. Roogoo can get devilishly challenging if it really wants to, but whether or not Twisted Towers is is a subject for a bit later. First lets talk about what the Wii version of the game brings to the table.

In Twisted Towers players rotate platforms using the B and Z triggers. Z rotates left and B rotates right, unless you’re left handed, and then you cans switch it. It’s a great control system that I’m only really complimenting because it stayed true to the original’s controls (360 controller’s triggers used for rotating) instead of adding waggle where it wasn’t needed. So that much didn’t change for the Wii version. Like I said, it is still the same basic concept. However, thanks to the Wii Remote’s pointing ability there’s a pretty cool added feature, which is the net. As they play, players can point the Wii Remote at the screen and the pointer is a net. The net can be used to catch different things floating in the background for extra points, throw hammers at enemies and, most importantly, catch pieces that bounce off the platforms because they tried to cram them into the wrong shaped hole. When one does catch these falling pieces one can dump them into the meter on the left of the screen which steadily fills as more and more meteors fall from the level. When players dump them in the meter goes down a little for each piece they’ve caught. It’s not as much as it went up, but it adds an entirely new strategy to the game.

Of course collecting shapes in your net and dumping them isn’t as easy as all that, as the meteors are still falling while this is going on. You’re basically already playing a game that can take a large amount of concentration and dexterity and then throwing in another thing to concentrate on. I’d liken it to someone telling you to pat your head and rub your stomach and just when you got that down they give you a third arm and say you also need to pinch your nose repeatedly. It’s hard at first, but once you get the hang of it you realize you’re doing something very cool. Not only is it a great feature, that works well in the game, but it is also one of those things that is only possible on the Wii — I love those things. 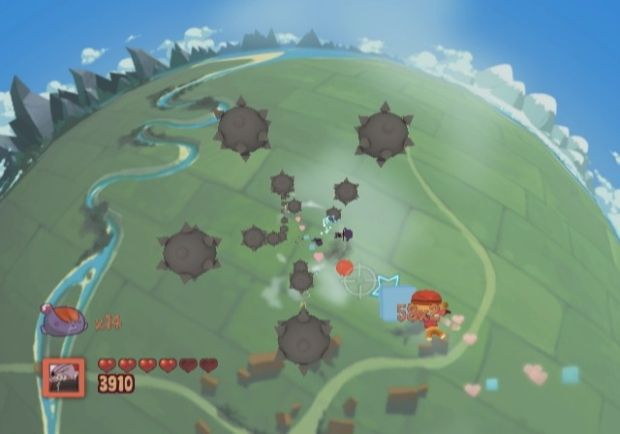 Unfortunately, the other two new Wii features are not as exciting. The first of these is a kind of inverse of the standard Roogoo stage. Instead of the meteors falling players play as a skydiving Roogoo, but they can only move in a circle by using the joystick (again, thank god they didn’t make it waggle control). The Roogoo rotates around, dodging enemies and picking up new magical meteors. Players can also shoot star shapes while flying through the air in order to kill approaching enemy planes and other objects. It’s actually all very well executed, but not terribly fun to play. The levels become more of a mindless distraction between the real levels that you want to play.

The second new addition is boss battles, which are great… when they show up. In the beginning of the game the boss battles look like they will be a highlight of the game. There is a battle with a vampire who steals your meteors as you play. Beating him is accomplisehd by catching the bats he turns into with the net while also trying to move the platforms and get the meteors to the bottom. Another early boss is a giant ice monster who freezes the pieces, thus turning them blue and robbing players of the color coding they suddenly realize they’ve been using to recognize the shapes. There is even a level where players have to shoot a giant squid with their meteors in order to kill him, but they can’t until they’ve gotten enough to fire at him. There are some clever things going on here, especially for a puzzle game, and then they fall off the face of the Roo. Eventually worlds just seem to stop having bosses at the end of them, and the final boss is somewhat of a let down as all he does is throw random boobie traps at the player.

This brings me to the overall difficulty of the entire game, which actually worked inversely to the quality of the bosses. Sadly, Twisted Towers never seems to reach that height of truly challenging difficulty unless playing on hard in some of the final stages. While each level’s design is interesting the game never really seems to step up and say, “All right, come and get it.” It’s too bad because the potential for some awesome challenge is all there, especially with the addition of the net. The few times levels really do push the player, it’s easy to see how great a puzzle mechanic the game has, but it just doesn’t happen enough. I suppose shooting for high scores is the ultimate goal of any true puzzle gamer, but without online scoreboards or a plethora of friends who want to get really good at the game, it seems a little pointless. Putting in the extra effort doesn’t seem worth it despite making the game that much more challenging. 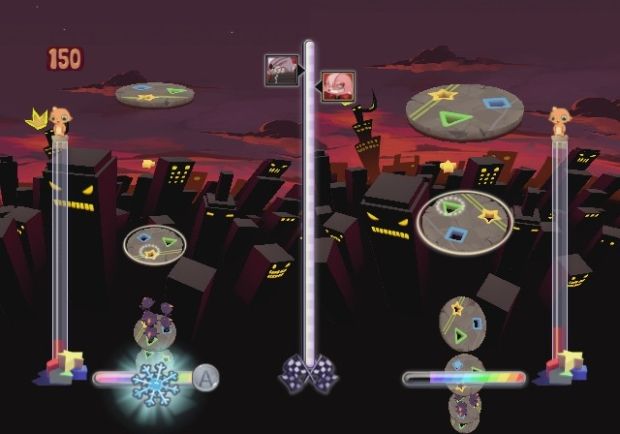 Speaking of friends, invite them over to play. You’ll have fun. Twisted Towers features two multiplayer modes, which has always been the strong suit of Roogoo anyway. In split-screen race players can compete against others in a race to finish the level. Most of the levels are playable to race in, meaning there’s plenty of action to go around, and the addition of weapons in multiplayer makes for some very frantic fun. Anvils, which make the pieces drop much faster, are especially annoying. This is where Roogoo really shines as a puzzle game. When played against another person the challenge of the game skyrockets as you’re actually forced to speed the shape matching action up. Again, the addition of the net adds a great level to the multiplayer as someone who is almost dead can buy themselves just enough time to escape and win with a well timed net dump.

If you play one part of Twisted Towers it should be the multiplayer because it is amazing multi… oh, wait. There’s no online. A game whose multiplayer is its best feature has no online. Unacceptable. It’s that simple. I know online and the Wii weren’t the best of friends at first, but they’ve made up and while that friendship might have some strange rules it does not excuse a lack of support. Also inexcusable is the lack of widescreen. Yes, Twisted Towers plays in standard television dimensions. I’m aware that the game doesn’t need widescreen support in any way to function, but black bars on the side of my television is not something I should ever, ever see anymore when playing a game.

I’ve drifted away from the multiplayer now and gotten all riled up, but it doesn’t matter since the second type of multiplayer is co-op and while it’s fun, it’s nowhere near as addictive as split-screen racing. Players play through the story mode and each one takes on a different role in different levels. It’s an interesting twist, but one that can easily be skipped over in favor for the competitive multiplayer.

Roogoo: Twisted Towers feels like a bunch of missed opportunities hanging out on top of a really great puzzle game. The great idea is there, it just never makes its way down to earth where players can get a piece of it. Those who appreciate a good puzzle game will be able to sift through the not so great stuff to discover how cool all the Roogoo games truly are, and may do so thanks to the discounted price, but those without the penchant for fitting shapes together and getting high scores aren’t going to find much here. Maybe the DS version of the game, Roogoo Attack, which can hook-up to the Wii version to open extra levels in both, is the way to go, but sadly that didn’t come to my door along with Twisted Towers.