A third-party controller worth checking out

I’ve tested many third-party game controllers in my day, and while I’ve liked quite a few of them, I always end up going back to the stock console controller. At the end of the day there’s never enough there in these third-party offerings to warrant staying away from what I feel is the default and proper controller for a given console. Again, it’s not that these controllers aren’t nice — they usually are. It’s just that, outside gimmicks or options, they’re never really better than the standard controller.

Maybe that has changed with Razer’s Sabertooth controller. I’ve been using one non-stop for a couple of weeks and it has become my controller of choice. 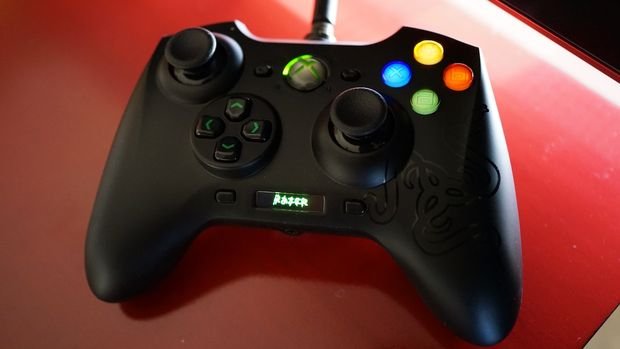 I was impressed from the moment pulled the Sabertooth controller out of the included carrying case. Throwing my thumb and fingers around the controller and mashing all of the buttons at once had the Sabertooth emitting sharp and fast little clicking noises — even unplugged I could tell that the buttons would be very responsive.

My favorite of the vast button selection on the Sabertooth are the A, B, X, and Y face buttons. They have very little travel distance and weight, and they click quickly when pressed with their microswitches. They are a million miles away from the slow, mushy standard Xbox 360 controller face buttons in both feeling and use.

I tried them in everything from heavy action games (DmC: Devil May Cry) to fighters to puzzle titles (Lumines, Super Puzzle Fighter) and they never failed to impress. In short, they move fast and that makes you feel fast, so you end up playing a bit better. Their shorter travel distance may throw some off at first, though. Once I got used to this, I really liked it, and found that using the standard Xbox 360 felt sluggish in comparison. 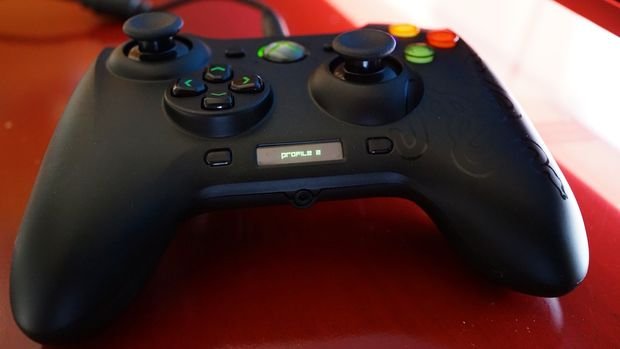 My second favorite set of buttons are the bumpers and triggers. The right and left bumpers have more travel distance than the face buttons, but they’re almost as fast and clicky, and feel amazing when, say, pulling off fighting moves, or throwing grenades. Again, a quick side-by-side comparison with a standard controller, even unplugged, says volumes. When it comes to responsiveness, the Sabertooth is in a completely different league. I’m nowhere even close to a competitive gamer, but I can clearly see how using this controller would give players a marked advantage.

The d-pad isn’t a nasty floating disc, and for that I’m grateful. Sticking your finger in an electrical socket is better than the standard Xbox 360 d-pad, so merely saying that the Sabertooth’s version is better isn’t doing it justice. Four separate press-able buttons that have no connection to each other let you hurl out quarter-circle forwards like nobody’s business, making it great for fighting games. My go-to Xbox 360 d-pad testing games, Dig Dug and Lumines Live!, were more enjoyable than ever with this PS3-style alternative. 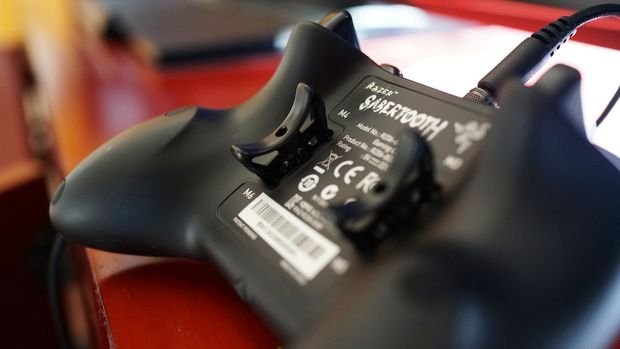 Speaking of advantages, the Sabertooth has several assignable buttons and functions for full customization. On the top edge of the controller, placed just between the bumpers and triggers, are left and right assignable mulit-function buttons. These buttons can be assigned to anything you wish using any of the controller’s other buttons or sticks.

On the rear of the controller, you’ll find two crescent-shaped rockers that Razer calls multifunction triggers. Both the left and right triggers rock up or down to give you four more assignable controls. In use, they’re extremely responsive, though they’re easy to accidentally nudge if you’re not actively using them as they fall directly where your middle fingertip would rest. An included screwdriver lets you remove these triggers if you don’t intend to use them.

The braided USB cable is also removable. And it looks really nice. 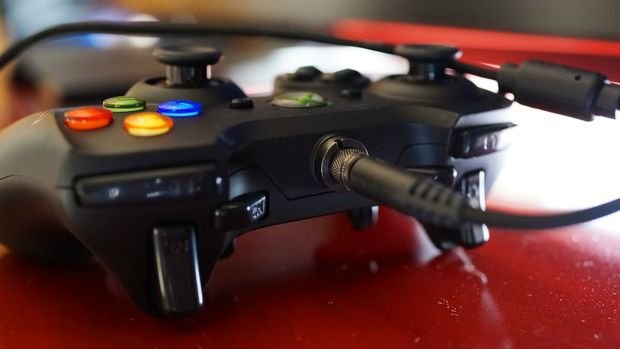 An OLED display along the bottom edge of the controller lets you quickly load one of two user profiles to game with by pressing a little button to the left of it and then pressing up or down on the d-pad to select one.

Another button on the right side of the display lets you customize any of the above-listed assignable buttons to your desired function. It’s easy: simply select the assign function, hit an assignable button or trigger, and then press the standard button you’d like it to function as. I used simple assignments at first, like pulling down on the trigger buttons to drop blocks in puzzle games, but broke into more creative uses later on. Doing a sort of reach-around finger wiggle in the place of button mashing for QTEs was a revelation.  In action games, the triggers are great as they let you copy the functions of the face buttons, allowing you to keep your thumbs on the sticks.

The customizability of this controller and the fantastic performance of its buttons and sticks would definitely appeal to professional and competitive gamers, but I fear that the $79.99 MSRP will prevent some from jumping in. That would be a shame as the d-pad and face buttons alone were enough to win me over. I’d love to see a version of this controller that drops the customization and OLED screen for a lower price point.

Still, the Sabertooth is a first-class controller. If you’ve got the cash to spare and don’t mind playing with a corded controller (bonus: PC compatibility) you won’t be disappointed.