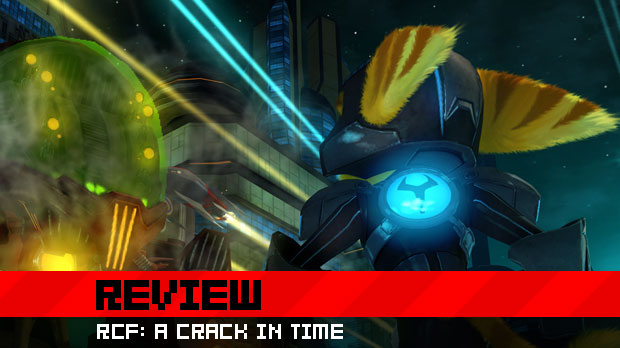 Insomniac Games’ Ratchet and Clank Future: A Crack in Time represents the ninth game in the series, which started back in 2002 on the PlayStation 2. That’s nine games in seven years, folks. Wow.

Sure, that’s not quite Guitar Hero status. Since that series was introduced in 2005, there have been one… two… hmmmm… okay. I lost count. A lot. Fortunately, Insomniac has been able to consistently provide enough advances in gameplay and delivered in bringing the fun that you might not have noticed that there have been (I repeat) nine related games released.

While A Crack in Time may not be the last time we see the duo in action, it does represent the end of a story arc. But about those advances in “gameplay” and “fun” — does Insomniac deliver with its latest adventure?

As the third and final installment of the Future trilogy which started with 2007’s Tools of Destruction, A Crack in Time kicks off right where Insomniac’s downloadable title Quest for Booty left off. Clank has been kidnapped by the evil Doctor Nefarious in a, uh, nefarious plot that has the evildoer attempting to control time and space. As the wrap-up to an overall story, A Crack in Time does a brilliant job of tying everything together, while at the same time adding more than enough backstory and history to characters that fans like myself have already come to love.

More importantly, A Crack in Time‘s narrative — and the cut-scenes that help move it along — represent a triumph for Insomniac. While the developer has always been good at crafting engaging and funny dialogue for the adventurous Lombax and the folks around him, A Crack in Time features some of the best scripted story elements in the series to date. To say Insomniac could hold its weight against animated fun-for-all-ages heavy hitters like Pixar and Disney wouldn’t be much of a stretch. Taken as a collection of characters and story, A Crack in Time would be an entertaining and viable feature film; I’d be first in line.

But without fun gameplay, A Crack in Time would fall flat. Fortunately, Insomniac’s Ratchet and Clank pedigree already provides a solid foundation for the new title. Longtime fans will immediately feel at home with the basic controls, even the game’s newer elements borrowing cues from previous titles. A Crack in Time is broken up into three distinct gameplay sections — action-packed Ratchet levels with light puzzle, the time-bending puzzle Clank levels with light action, and all out galaxy-exploring space gameplay.

The Ratchet levels are cut from the same template as the rest of the series, with players exploring various environments with platforming elements and a whole lot of blowing crap up with some of the sickest (and most clever) weapons in gaming. While many familiar tools return from Ratchet’s previous exploits, Insomniac has added enough “new” to keep you on your toes, including upgradable “Constructo” weapons that can be customized in both function and look. No surprise, exploring planets and blowing up a wide assortment of curious alien lifeforms is as fulfilling as ever in A Crack in Time. The simple act of breaking boxes and collecting bolts hasn’t gotten boring, and is as addictive as it was in 2002 when Insomniac introduced the furry/metal duo to PlayStation 2 gamers.

It has to be noted that one of Ratchet’s newest gadgets, the Hover Boots, are an absolute blast to use. In fact, once you slap them on your feet a few hours into the game, you’ll not want to take them off. A faster form of movement, the boots allow Ratchet to hover and glide quickly across the ground. Environments are equipped with “speed strips” (how convenient) that will give a quick boost, lending itself to race-like sections and sick jumps that are scattered across the game’s worlds. It’s interesting how such a simple addition can change the way a game feels almost entirely — the simple act of moving from one side of a world to the other can be absolutely exhilarating. If A Crack in Time proves one thing, it’s that every game — from Double Dragon to Guitar Hero: Rocks the 80s — could probably benefit from some some of hover-boot implementation.

Clank gameplay sections offer an interesting contrast to the more action/shooter Ratchet areas, as well as offering a brilliant and mind-bending gameplay innovation — the ability to record and replay multiple instances of Clanks in an environment to solve puzzles. While the Clank sections aren’t entirely devoid of action (the little guy can swing his Chronoscepter to bash enemies or deflect their attacks), its this new gameplay addition that is the true highlight. While delving into the specifics will probably require more words than I’d care to spend in this review (you can get more details here), here’s the short version: you can record multiple instances of Clanks, and play them back in real-time to help you trigger switches and such.

One example includes a room with two switches, both of which require pressure to open a single door. The idea would be to record two instances of Clank, one for each switch. On the third recording, you’d move your Clank in real time towards the opened door, as the two recordings provide pressure to the aforementioned switches. That’s the simple example, with these puzzles getting more complicated as the game progresses by including enemies, moving platforms, and more. The puzzles required to advance the story are tricky enough to make you scratch your head, but never convoluted enough to have you stomping your feet in frustration. The bonus Clank puzzles, on the other hand, are a whole other ball of wax. Fans of unique platforming puzzles and mind-benders like Portal should be delighted by the challenges.

Insomniac also added an all new space exploration element to A Crack in Time, which Ratchet can board his upgradable ship and zip around the galaxy. Not only does this provide a link between missions, but also allows Ratchet to explore the various planets and moons around the galaxy. These spherical worlds allow Insomniac to throw in plenty of non-story driven obstacles, many of which are directly tied into the use of Ratchet’s hover-boots. On these worlds (which can be visited in mostly any order you choose), Ratchet can find additional bolts to spend on gear, as well as Zoni that can be used to upgrade his ship.

Controlling the ship is pretty basic, moving left and right with the right analog stick, and the buttons used to “pew pew” various enemy ships along the way. While there’s nothing particular wrong with the flying sections (they’re actually a good bit of fun, and a nice break from the standard action), they can get a bit repetitive. It’s a whole lot of “pew pew” and “pow pow” in a vast space that mostly looks the same, which one can only take so much of. There are a few story-related battles that take place during the sections to switch things up a bit, they really take a back-seat to the more traditional style of Ratchet and Clank gameplay.

By no means were Tools of Destruction and Quest for Booty slouches in the visuals department, but it must be said that A Crack in Time is easily the best looking of the bunch. Iterations on the in-house Insomniac Engine have allowed for more colorful environments, better animated characters, and slick particle and lighting effects. Insomniac clearly knows what it’s doing with the PlayStation 3 and it shows; there are few games that look this crisp, colorful, and alive on any platform.

If there’s any one particular thing one could ding A Crack in Time on is that it has a feel that’s completely consistent with the rest of the series. So much so that one may be able to accuse it of being “more of the same,” despite a number of interesting gameplay additions and innovations. Of course, this isn’t completely a bad thing — the quality of the series has been far above average across the board. Complaining that A Crack it Time is a lot like the other Ratchet & Clank games is like complaining that two five-star meals “kind of taste the same.”

For fans of the series, picking up A Crack in Time was never a question. You’ve likely already pre-order the game. If you’ve for some reason found that Ratchet & Clank isn’t your cup of tea, it’s likely you’re suffering from an illness, but take note that A Crack in Time is similar enough that it probably won’t change your mind. For those of you who’ve never embarked on an adventure with the furry-faced hero and his brainy metal friend, you’ve got a lot of catching up to do, but it’ll be worth it — Ratchet & Clank: A Crack in Time is easily one of the best in the series.

Filed under... #Ratchet and Clank