To VR or not to VR: Income is the question

I will never forget my first experience with virtual reality. I was at a county fair as a child, and there was a large line for a “virtual NASCAR” racing game. I took one look at the helmet, and that’s all I needed to see — I wanted in. Of course, reality took hold of me after actually getting into the enclosure, and was far less impressive than my imagination. The tech simply wasn’t there, and I felt like I was just wearing a TV on my head.

But VR has made a lot of strides in the past few decades. Manufacturers have figured out how to cram two 1080p screens (one for each eye) into a tiny space, and software has progressed to the point where developers can work with 60 frames per second or higher to create a better experience.

The term “immersive” is thrown around more than Katt Williams these days, but in this case, it’s true. As a skeptic who has just spent roughly one week with the Oculus Rift, I’m sold.

There’s a lot to parse here with the dawn of modern VR, so I’m going to break it up a bit. 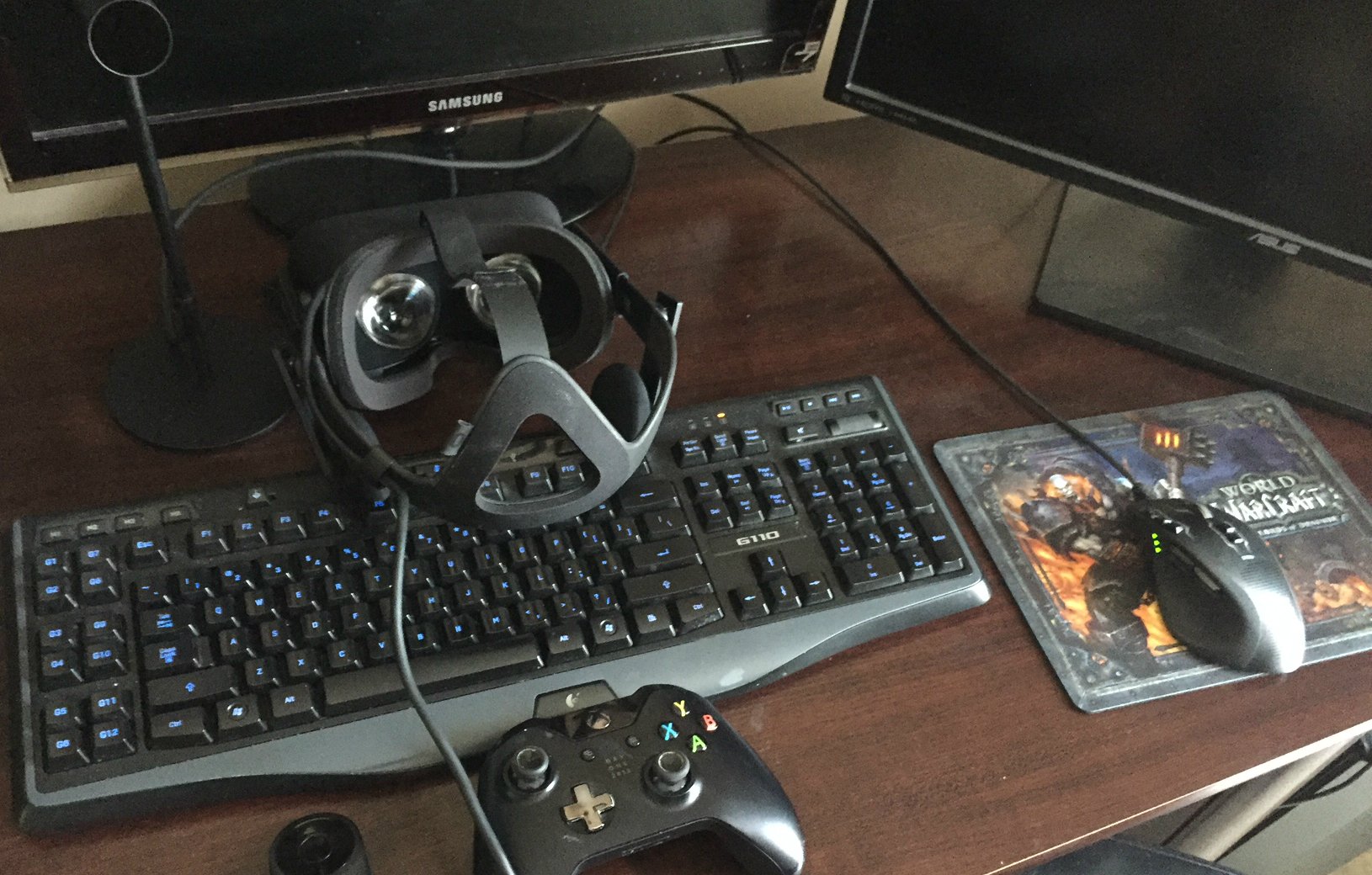 VR as a lifestyle:

In just one day of using the Rift, I didn’t hear the door for a package, didn’t hear my wife come home, and ignored my phone for a few hours. There’s no built-in clock for basically everything that’s offered on the Rift, so it’s very easy to lose track of time.

It’s…weird to say the least, especially for the first few days, but I got used to it. I started to take the unit off more often and periodically check the time. I put my phone in my pocket and turned vibration on, and so on. I’ve seen a few instances of people saying they can “forget to eat” and the like but I think that’s a tad dramatic. VR is immersive and can trick your brain in many ways, but it doesn’t make you incompetent. Another aspect of VR (though more so with the Vive than the Rift) is physical space.

Much like the Wii owner who threw their Wiimote into the TV at launch, I can foresee a ton of “incidents” in the near future. But again, it’s something I just got used to. What I’ve been doing is keeping the remote on the right side of my desk for UI navigation, and the Xbox controller on the left. That way I can feel the edge in front of me and know exactly where to go. It becomes second nature after a few days and is not as disorienting as one would think. There was one game that really threw me for a loop though. Esper 2 actually takes place sitting in a chair, and when looking down, you’ll see an actual virtual chair below you.

I also noticed an intense feeling of isolation within VR over time. I like to share nearly all of my gaming experiences with my wife, with a “watch this!” moment happening on a daily basis. That basically cannot happen within the confines of virtual reality. Sure, I can tell her to put on the Rift on, and watch it on my PC’s screen in a gimped 2D form, but it’s not the same. This is not only a problem in homes where you share a gaming space with family or friends, but it’s also an issue in terms of “selling” VR in general. On a personal level, I also like to watch TV or movies while I play some games, which isn’t possible here.

While there is an adjustment period and hurdles to climb, it isn’t all that difficult of a concept to grasp.

Out of the box, buying a Rift will net you a headset, sensor, remote, and Xbox controller (basically everything you see above). The sensor is rather small, and when placed in-between two of my monitors, I hardly even notice it.

Setup was also really easy. The headset needs a USB and HDMI port, and the sensor just needs USB. It technically calls for three, but that’s just taking the Xbox pad into account — the remote is wireless. It was literally plug and play for me within five minutes after installing the software.

This isn’t the VR of old where headsets would cause discomfort within minutes, as the Rift weighs less than a bicycle helmet. I didn’t feel it even after hours of use, which is good news for people who love marathon sessions. The headphones are of great quality, with booming surround sound and cups that completely cover your ears. They’re removable too if you want to replace them with your own solution, which is great for audiophiles.

Numbers-wise, the Rift checks out. It clocks in at a resolution of 1200×1080 per eye, with a 90Hz refresh rate. It also sports a gyroscope, so it can track head movements as well as gestures, like nodding your head yes or no. The cables for the headset and sensor are four and two and a half meters respectively, so there’s a decent amount of slack to accommodate most setups.

I don’t even have a major issue with space right now, though I can see these VR units piling up. If I had even just a Vive in addition to a Rift, it would be too much. 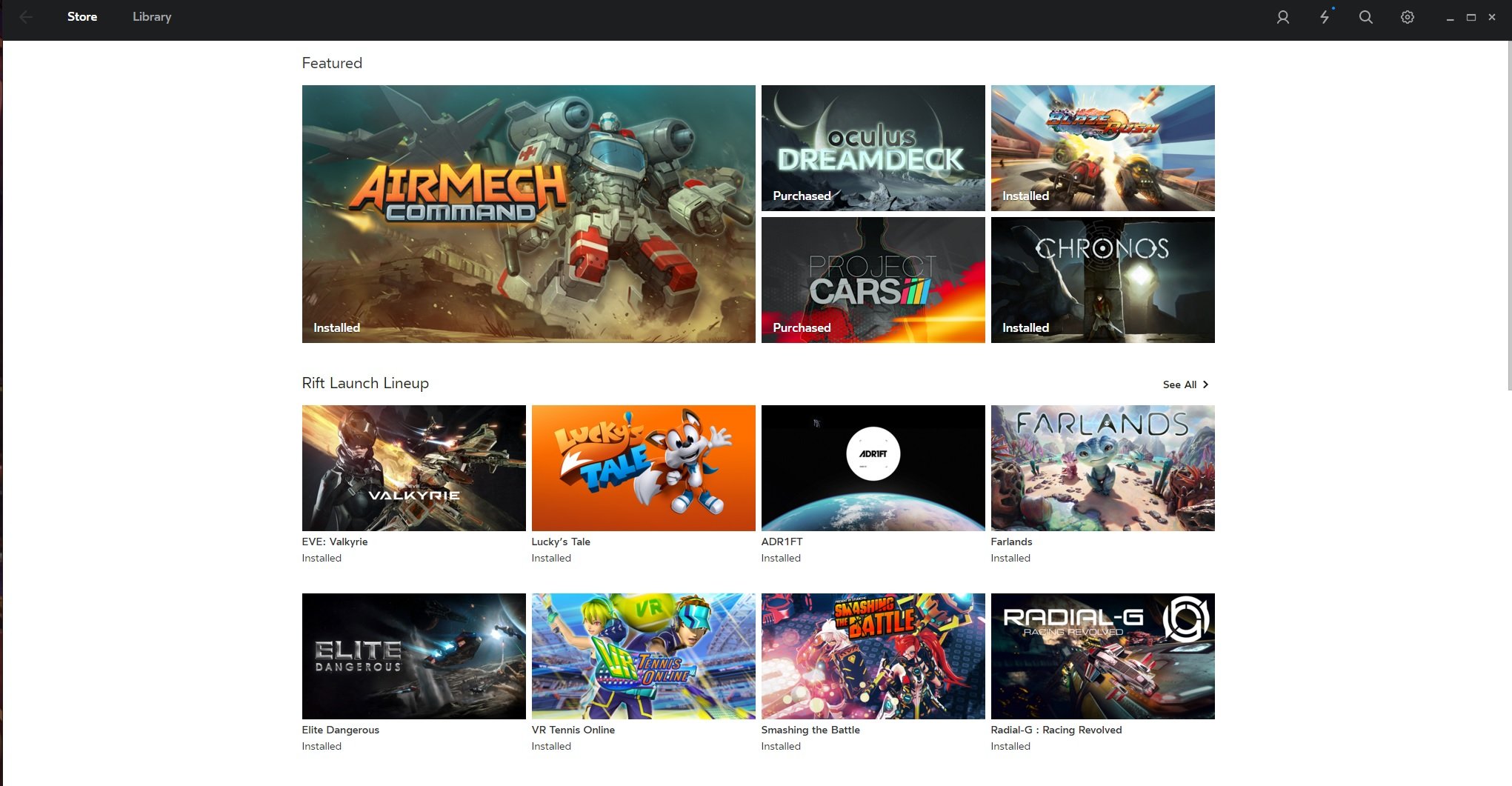 To put things into perspective, there were 14 PS3 games (seven of them were sports oriented), and 12 PS4 games at their respective launches. The Rift is kicking off with 30. Sure, a portion of them are ports or are on PC (Albino Lullaby is on Steam already), but a ton of games are kicking off as either timed or permanent exclusives. The heavy hitters are Adr1ft, Chronos, EVE Valkyrie, Lucky’s Tale, and Project CARS.

I’ve played all of them, and here’s the consensus I’ve reached — nearly none of them are throwaway apps. Just about every game shows off VR to some extent, and in roughly half of the cases, justifies it entirely. Games like Fly to Kuma, a Lemmings-like puzzle title, highlight the potential of 3D cameras to present varying perspectives in virtual reality. Lucky’s Tale, a platformer, allows players to “look” over and around objects to locate pitfalls, like you’re peeking into the world itself — a far cry from most games that can’t even nail a consistent camera angle. Expect a number of software reviews today and more in the coming days.

Oculus isn’t just a gaming platform as there are other experiences, too, like short films and travel videos. Henry, a tale about a cute hedgehog, is adorable, and better than most of Pixar’s shorts in recent years. There are also plenty of documentaries and showcases for worldwide locations, like tours of Peru and Nepal. 360 videos have been around for many years now, but headsets have advanced to the point where home viewing is worth going out on a limb for. There’s probably a full day’s worth of video content at launch with more on the way, as well as support for personal videos and photos (the former of which can be viewed in a virtual theater environment).

So what about the app? It gets the job done and has the functionality of some of the more basic launchers like Origin or Uplay. It also boots up directly after putting on the Rift, and users can launch programs from the app. It needs enhancements, though, which Oculus VR is claiming will arrive in the coming weeks. The first update will allow users to change the root install drive to something other than your default directory — something that frankly should ship at launch in the era of small solid state setups. Oculus has an uphill battle with its propriety marketplace, that’s for sure, as it is directly competing with the Vive’s preexisting Steam marketplace. 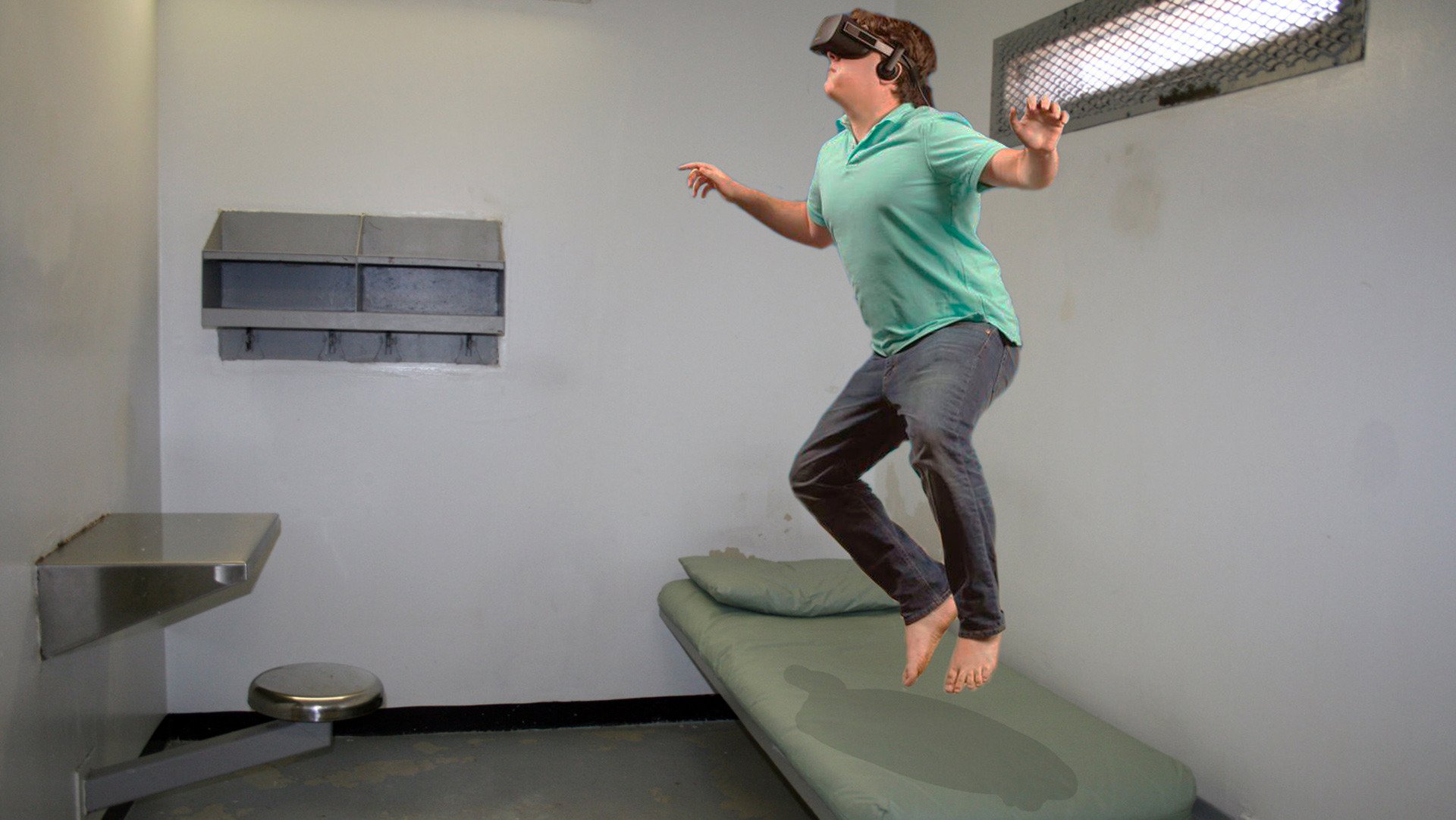 Guys, this is the pioneer stage of VR. This is the first consumer Rift (there will be more), which is the first major player to market, in the very early stages of the industry. $600 is a massive pill to swallow for anyone regardless of income. Is VR the future? I’ll let the market dictate that. Should it be the future in your home? I think so.

I’ve had a lot more fun with the Oculus Rift than I thought I would, and playing through the launch lineup was more exciting than any console in recent memory. There’s something for everyone here, and all of it will feel new and exciting, especially if you’re an average consumer who hasn’t tried it out at trade shows over the years. We’ll have more thoughts on the Vive coming up so you can make a better decision, because all told, you should probably only get one of them, and PlayStation VR doesn’t arrive until October.

[A full retail Oculus Rift headset was provided by Oculus VR for testing. An Oculus-ready PC was also provided, but was not used or unboxed in favor of using my home PC, and will be returned.]