Return to the Garden of Madness

Despite some earlier attempts at the hobby, I’ve come to accept that I am not a game collector. I don’t have it in me to buy a game with the intention of keeping it forever. I’d rather play it and trade it than keep it on a shelf. However, a few games have warranted return visits over the years, such as my annual trek through Silent Hill: Shattered Memories, for instance, or the occasional dip into the post-game of Dragon Quest IX: Sentinels of the Starry Skies. Thus, I keep a small binder on my shelve to house those old games.

No More Heroes and No More Heroes 2: Desperate Struggle have their own page in that old game binder. Every few years, I find myself gravitating back toward them, usually when I need to let out a lot of anger by cutting some fools in half. But I think now is the time for me to give those old games up for good. Not because I’m over them, but because the Switch ports for both games are so much better than the originals. 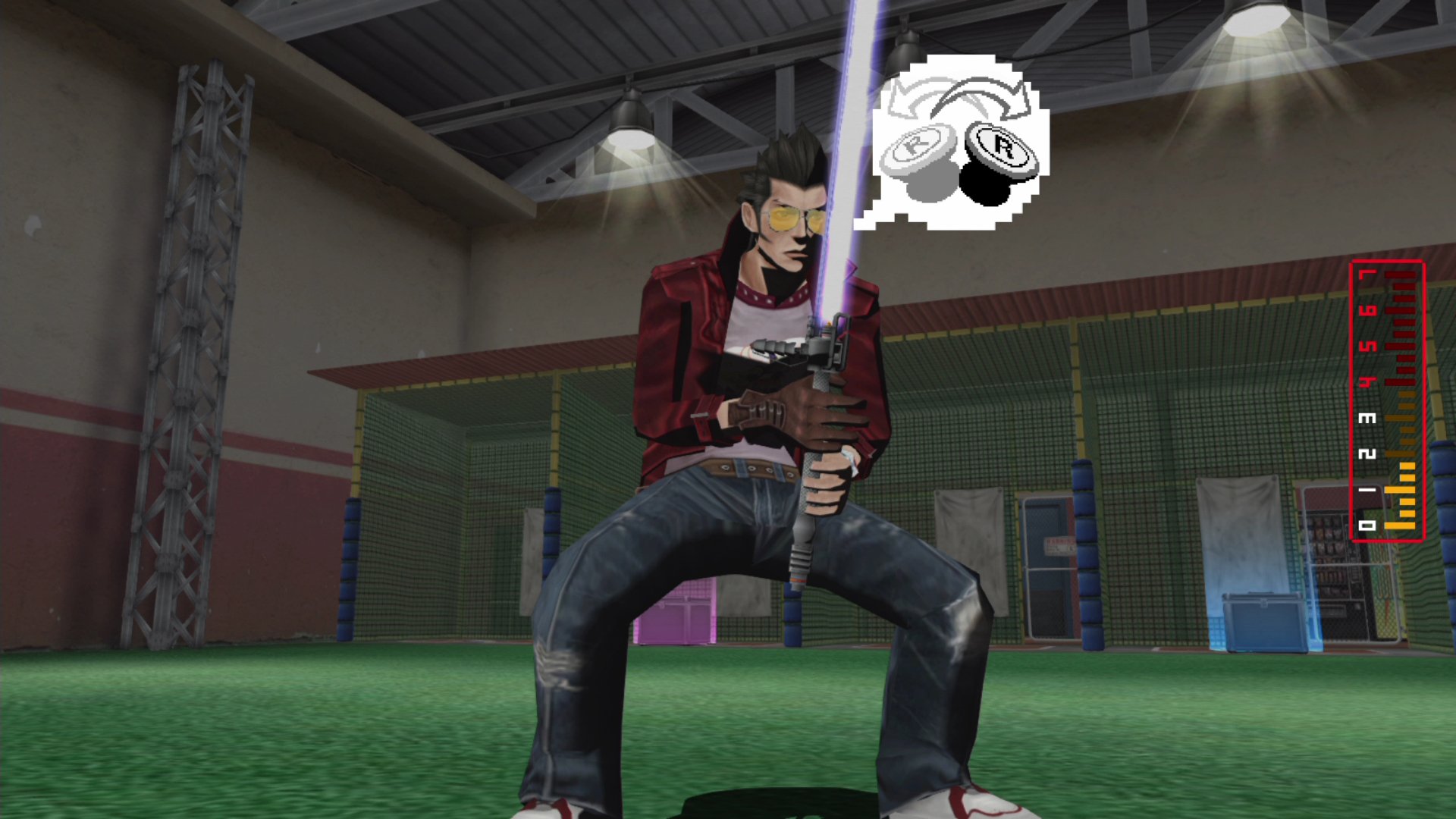 That’s how Anthony Burch started his review of the original game more than a decade ago, and I honestly can’t think of a better combination of words to start a review of this Switch port. It is goddamn fun, even after all these years. Its sequel, No More Heroes 2: Desperate Struggle, is still so goddamn fun too. Most everything that was good and great back on the Wii is still good and great on Switch.

But that’s just the beginning of this hero’s journey, and his personal growth through the countless killings over two games results in a well-rounded character. He becomes a man who recognizes his role in the world and the wrongs of his line of work while still occasionally perving out on Sylvia. Though she’s able to dish out just as much as he can give. In its own weird way, No More Heroes and its sequel are not just stories of determination and revenge, but an epic tale of love between two seriously damaged people.

This world is full of damaged goods, and not just the ones you eviscerate with your beam katana. One of the key draws of this series is its collection of killers. Both games task Travis with climbing his way up the ranks with the United Assassin Association, first from the eleventh-ranked spot, then from the fifty-first spot in the sequel. The members of the UAA you’re tasked with disposing of are an eclectic bunch of psychopaths. Desperate Struggle has a fun gallery of baddies like Margaret Moonlight and Matt Helms, though I think, on the whole, the assassins from the first game are the superior bunch. It’s tough to top someone like Destroyman or Bad Girl or having to fight upside down against a wily magician. While the assassins from the first game edge out those from its successor, Desperate Struggle excels with its level design, which was one of the weakest points of the original.

That’s probably because everything in the first game had to be tied to the big, empty, open-world map of Santa Destroy. I didn’t care for open-world back when this originally released, and time hasn’t exactly made its inclusion seem necessary. You still fight one too many bouts at the same damn parking garage and other equally uninspired locations like a subway train, bus, or just a long, straight corridor. Any chance at a properly paced game goes right out the window when you find yourself driving from one side of the map to the other to complete the menial jobs you have to do to buy your way into the next match of the UAA rankings. It quickly feels like unnecessary padding, and while both games are relatively short, Desperate Struggle makes far better use of its brief run time.

But even if I didn’t like driving around the city, I will admit the streets of Santa Destroy have never looked so good. The art direction absolutely holds up. Grasshopper and Engine Software have done a fantastic job converting these games to high definition with pretty solid framerates. Unfortunately, those improvements don’t seem to apply to anything not in the in-game engine, so pre-rendered cutscenes look fuzzy and unfocused compared to the rest of the visuals. It’s particularly noticeable and jarring in Desperate Struggle. The fight against Charlie Macdonald and his cheer squad is not a pretty sight. 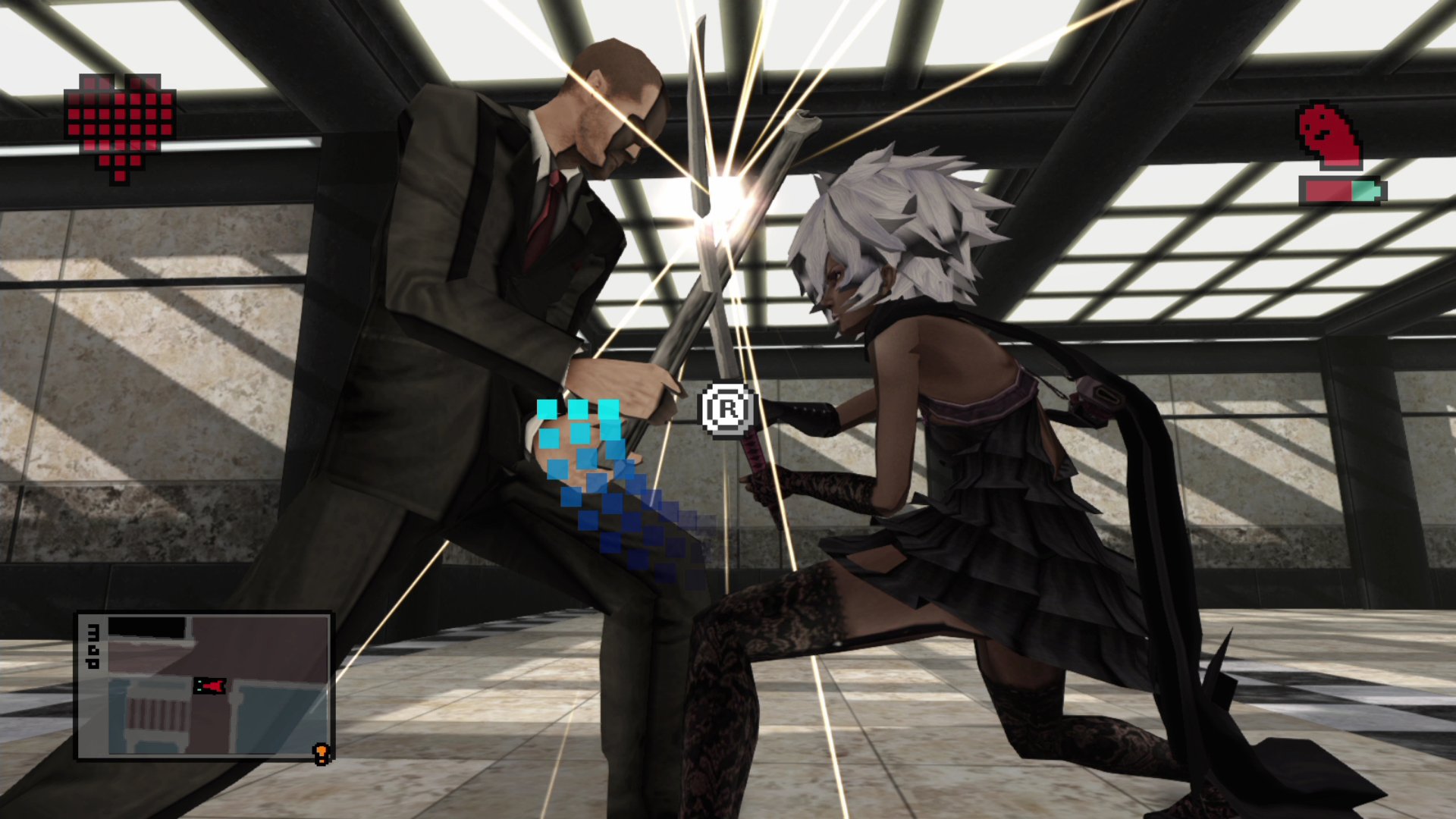 That’s easy enough to get past when the rest of the game is so damn fun to play. Both titles present players with two control options: you can play using the same motion controls found in the first title or go with a standard control option like the one that was introduced in the sequel. I’m a bit of a purest, so any time I was playing in docked mode, I broke out the wrist straps for my Joy-Con controllers. The motion controls benefit from improved technology here, and I still get a kick out of flinging my arm left to slice some fool in half. I have noticed instances where the controls would be slightly unresponsive, such as when I’m asked to press Y to execute a guy on the ground, but these moments are fleeting.

What’s not fleeting is the immense joy I have going through both these titles again. Sure, I think Desperate Struggle is the more well-put-together of the two, but they both have quirks, charms, and moments of frustration that are uniquely their own. I don’t care for having to raise money just to progress through the story like you need to do in the first game, but I still get a kick out of seeing Travis mow a lawn or catch fire when I overfill a gas tank. The giant mech battle of the sequel is a massively wasted opportunity, but by unshackling the narrative from an open-world design, the developers were able to flesh out Santa Destroy and its inhabitants.

I’ve been playing No More Heroes and No More Heroes 2: Desperate Struggle for more than a decade now as they never cease to amaze me with their untethered style, violent action, and satisfying combat. With these HD ports on Switch, you can be damn sure I’ll be playing them for the next decade as well.