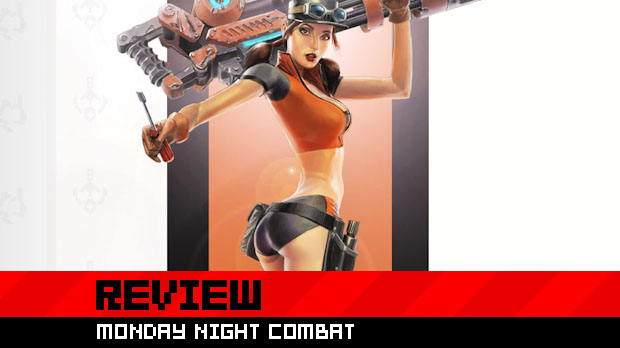 Two teams of cartoon-like class-based combatants compete in multiplayer arenas with a range of quirky skills and ludicrous weapons. Sound familiar? Of course it does!

Monday Night Combat looks and sounds as derivative as they come, with an art style and general premise that appears shamelessly ripped from Valve’s Team Fortress 2. However, under its aesthetic surface, Monday Night Combat boasts a deceptively inventive core, with a unique blending of genres that works surprisingly well.

You never really can judge a book by its cover, so read on for the full review of Monday Night Combat. 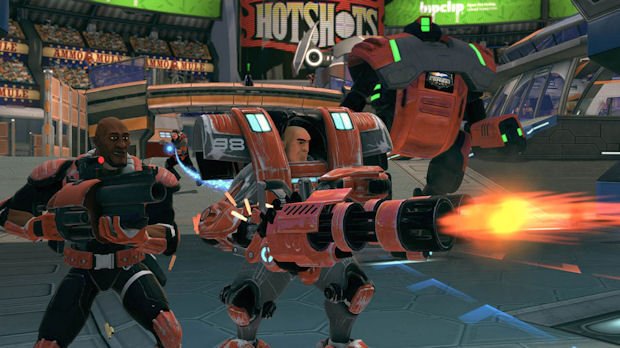 Monday Night Combat is a game show in which genetic clones compete for fabulous cash prizes. The game is a unique blending of the third-person-shooter and tower defense genres, as each team attempts to push its forces to the enemy’s “Moneyball” and destroy it for the win.

Each team is backed up by a respawning army of bots, and they have to escort these bots to the Moneyball to deplete its shields. Players can also construct turrets at specified locations to protect their own base. Money is earned with kills, and the cash not only goes towards turrets and their upgrades, but can be spent on personal player enhancements.

The premise is quite brilliant, and works out incredibly well. Deciding which of your skills to enhance, or whether to hold off on skills and create turrets, makes for some cool choices, The game usually becomes one-sided after a while, but the tug-of-war beforehand can be rather exciting and tense. Even if the unique flow of the match doesn’t get one’s attention, the solid third-person-shooting is still a lot of fun, especially with such a diverse range of classes to choose from. 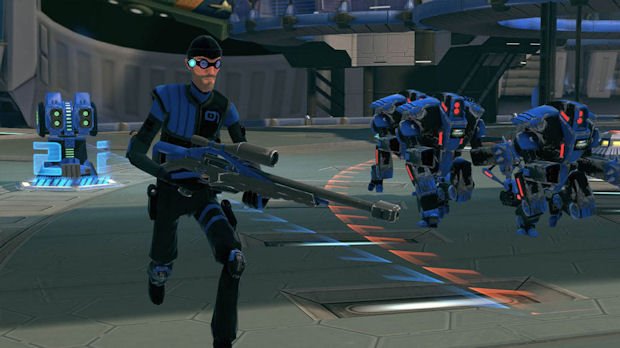 The game has two modes — Crossfire and Blitz. Crossfire is the competitive multiplayer described above. Blitz is a co-op mode in which players protect their Moneyball from increasingly powerful waves of AI-spawned bots. There are a variety of different Blitz modes, ranging in number of waves and difficulty, but the general “tower defense meets Team Fortress” play style remains the same throughout.

There are six distinct classes — the stealthy Assassin, the hardy Tank, the ranged Sniper, the balanced Assault, the powerful Gunner and the Support, who we will get to in a moment. Uber Entertainment did a really good job of making each class feel distinct, with a range of unique abilities, such as the Assassin’s invisibility or the Tank’s product placement grenades. There is a class to fit every style of play, and even the stereotypical characters feel somewhat unique.

Monday Night Combat is a lot of fun and can get quite addictive, but it does suffer from one major problem — it’s very unbalanced. The Support class, at the time of writing, is broken beyond reason. It’s very clear that the developers had a lot of affection for the character, and as such they have made him into a Mary Sue archetype — combining the strengths of both a medic and an engineer, with none of the weaknesses. He can heal allies, hack enemy turrets, spawn his own super powerful turret, drop instant-kill nukes on enemy heads, and more besides. He doubles the strength of his friends and decimates his enemies. You could have made two whole new classes out of everything Uber gave the Support, and right now he’s a potential game breaker.

Other classes suffer from balance issues as well. The Tank is useless in a ranged fight, but is too slow to get close enough to do real damage before better-ranged classes tear him apart, while the Gunner is ludicrously powerful and has no real down side to counter his strength. 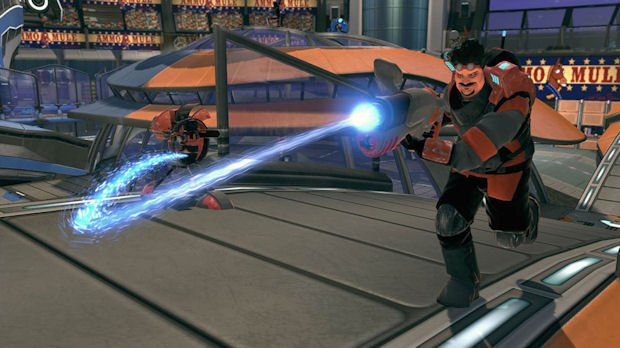 The game also lacks variety. Blitz mode has one map, and Crossfire only a meager handful. The lack of variety extends to the game’s sound, with MNC’s announcer and player characters repeating the same painfully unfunny catchphrases.

It’s worth noting that there seem to be a number of connection issues. While the game has host migration, it appears to only work 50% of the time and sometimes won’t occur at all. Connections to lobbies frequently terminate, and there’s even a glitch where the connection will cut during matchmaking and force players onto a blank screen, from which the only way to escape is by exiting the entire game. When games get started, the are lag-free and tight, but the connection errors are frequent enough to get rather annoying.

It is to Monday Night Combat‘s great credit, then, that it still manages to be so compelling and fun despite these rather huge flaws. The class imbalance will eventually become tolerable if you can be careful about fighting the powerful characters, and the gameplay is fun enough that one tends not to mind the lack of varied environments.

The game requires one to get used to it, to work around its flaws and find a class that works for them. As players earn cash, they can unlock custom character slots which lets them enhance their chosen class with stat-boosting sponsorships. Once the custom classes are unlocked, the game becomes far more fun to play and comfortable to use. It’s just a shame that the cash isn’t spent on anything else, and you end up earning huge amounts of money with nothing to spend it on. It would have been cool to be able to visually customize the characters as well. 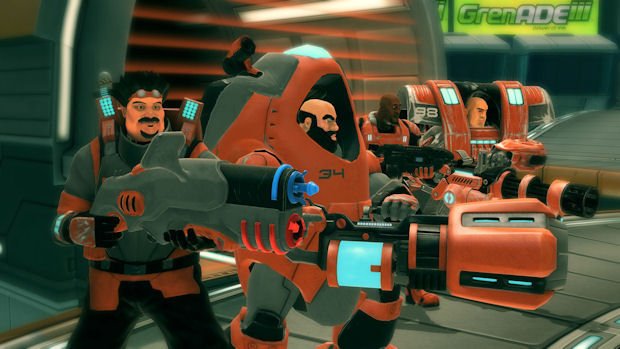 I actively hated this game when I first started it up. I couldn’t understand where the fun was and it looked too broken to enjoy. However, once I found a class I gelled with and learned how best to hide his weaknesses versus the overbearing strengths of some of the other classes, I found that it was incredible fun. It’s truly a fine little game, but one that requires you to do a little bit of work up front.

Monday Night Combat has its flaws, but ultimately it’s a game that looks great, has a lot of heart, and provides a fun, unique, and undeniably addictive multiplayer experience that’s well worth the fifteen bucks. With more balancing and a great variety of things to do, this could be an absolutely stellar title. As it exists, however, Monday Night Combat is most definitely the start of something very, very good.