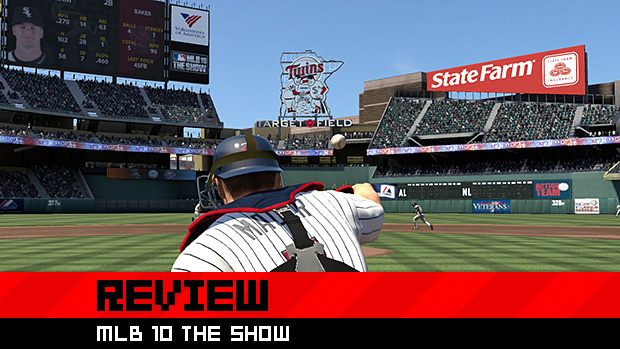 Simulation sports games have a doubly difficult job: not only are they tasked with delivering a realistic playable version of a particular sport, but they also must present an experience that looks and sounds like a television broadcast of that sport. Sony’s MLB The Show series has excelled in both areas for years. But because sports games come out on an annual basis, consumers demand even more — each new iteration must be markedly different from, and better than, its predecessors.

How much innovation does MLB 10 The Show bring to baseball games? What does it improve upon from MLB 09? The answers to these questions, and more, are after the jump. 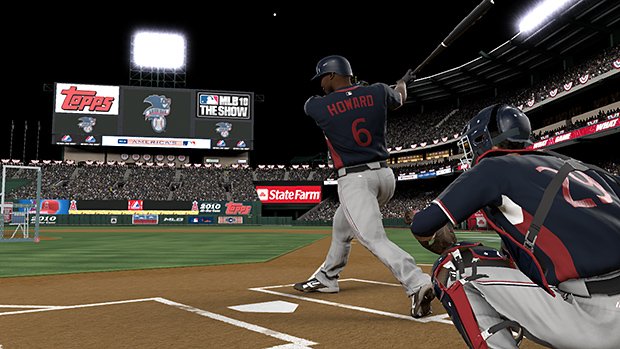 The MLB The Show games have always been some of the best-looking titles around — not just for baseball videogames or even sports videogames, but across all console games. They offer the kind of graphics that can make you think — if even for a second — that you’re watching an actual game of baseball on television. This year, the game’s visuals remain unparalleled (aside from player faces, some of which are done better in 2K Sports’ MLB 2K10), and the broadcast-style look is aided by the new “real-time presentation.”

Here, all camera cuts occur in real time, so each new angle you see flows directly into the next one. For example, if I hit a home run, the camera will follow the ball into the stands. Next, it might show some raucous fans celebrating, and then switch to a shot of the dejected pitcher who served up the long ball. Alex Rodriguez will probably be in the shot, since he’ll be rounding second base behind the pitcher. Finally, the camera might show the entire field, which is when the infielders can be seen shifting to the right side of the diamond in preparation for the next batter, Mark Teixeira. This is the kind of attention to detail that Sony San Diego is known and loved for — it seems minor, but makes MLB 10 stand out. 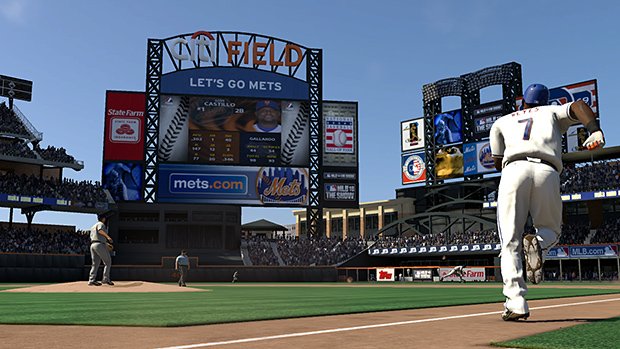 Other visual additions in MLB 10 include dynamic fans and off-field players: fans seated in the front row will reach over the railing to try and grab a foul ball, and players in the dugout will duck to avoid balls hit in their direction. You’ll even see pitchers warming up in real time after you put them in the bullpen. And the developers finally addressed a longtime gripe of mine — collision detection. It’s still not perfect, but at least it’s not completely absent like in years past.

Unfortunately, the audio side of the TV equation is less impressive. While the ambient ballpark noises are wonderful — and if you’re not happy with them, you can augment them yourself in Sounds of the Show — the commentary trio of Matt Vasgersian, Rex Hudler, and Dave Campbell remains the only unremarkable, mediocre aspect of the presentation. Hudler and Campbell, in particular, repeat lines too often — and some of their tired old sayings haven’t changed in years.

Of course, you can turn them off and focus on the game itself, which is still stellar. New features include a more granular throw meter and three different kinds of pickoffs, and although the pitcher/batter confrontation itself hasn’t changed, it would be silly to criticize Sony San Diego for opting not to tinker with something that works perfectly as-is. What’s so great about The Show is the way in which players behave: baserunners hop over ground balls, outfielders crash into the wall after catching deep fly balls on the run, and double-play-turning infielders tumble over runners sliding into them at second base. Thanks to better animation blending, the on-the-field action exhibits a fluidity that has to be seen to be believed. 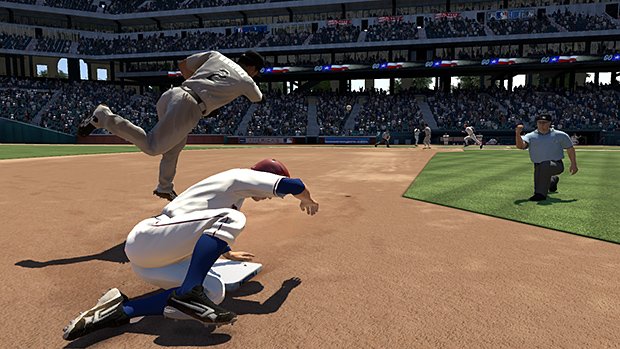 It’s a shame, then, that the most impressive aspects of MLB 10 simply evaporate when playing the game online. The Show has been continually held back from true greatness by its sub-par online play, and sadly, it’s no better this time around. I played ten or so games, most of which ended prematurely when the player on the other end quit due to pervasive, crippling lag. Perhaps it’s my wireless connection, but for what it’s worth, I haven’t had issues with any game besides The Show (both MLB 09 and MLB 10).

Lag can ruin any online game, but it’s particularly disastrous in baseball, where a mere split second can mean the difference between a home run and a very long out. The terrible lag causes hitters to flail wildly at pitches whose journeys to home plate have gaps, and it makes it tremendously difficult to properly locate pitches because the pitching meter — which is completely timing-based — stutters. What’s more, the initial indication of your connection to your opponent, which shows up in the team select screen, doesn’t seem to have any bearing on the actual quality of a game. Every game I played online had an ostensibly “great” connection — according to the team select banner — but the in-game display was rarely green (“great”), instead fluctuating between yellow and red.

In fact, the awful lag compromises the entire online play experience. Strange visual glitches — which are nowhere to be seen in the offline game — pop up online. I saw my first baseman fail to stick out his glove to catch a ball thrown to him, but he managed to catch it anyway before the hitter got to first — which somehow ended up in a “safe” call at the bag. In addition, either the X button magically becomes much less responsive online, or check swings are just nearly impossible to pull off over the Internet. I’m also miffed that Sony San Diego hasn’t yet integrated the PlayStation Network friends list into the game; instead, you have to add your PSN friends to a separate in-game buddy list. Perhaps it’s an issue with the way the PSN itself is set up as opposed to something the developers have any control over. 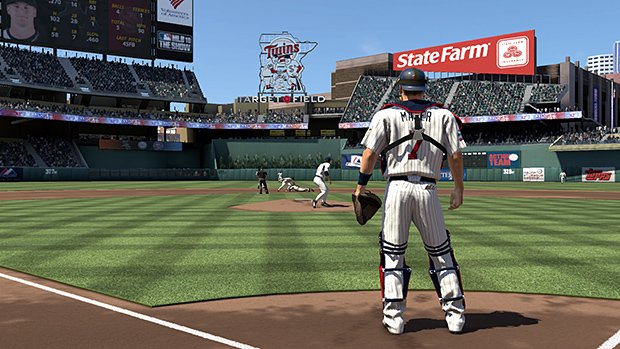 Again, MLB 10 offline is an experience that’s second to none. The addition of Catcher Mode in Road to the Show — no doubt influenced by the cover athlete, Joe Mauer — finally makes it worthwhile and rewarding to play as a catcher. Instead of merely throwing out runners and fielding balls in front of the plate, you get to call the pitches — and in a nod to the dreams of catchers everywhere, your pitcher can’t shake you off. MLB 10 has shorter load times than MLB 09, but I’ve seen some strange loading issues where you won’t be able to press a button for a few seconds after it appears that the game has finished loading a new screen, as if the game is temporarily frozen.

While MLB 10 The Show remains the best baseball videogame money can buy, it’s no longer light-years ahead of 2K Sports’ effort. Is it better than MLB 09? Definitely, but not by a wide margin. I’d certainly still easily recommend it to PS3 owners, since they have a choice between it and MLB 2K10, but if MLB 11 doesn’t vastly improve upon this year’s regrettable online offering, we may very well have a competition on our hands in 2011.