The Metal Gear Solid series means something different to everybody. To some, the series symbolizes the full maturation of videogames as a narrative art form. For others, the series is a symbol of the revolting excess that has grasped the hearts of so many of today’s game developers. Where you stand on the Metal Gear Solid franchise likely depends on how well you tolerate hour-long cut scenes, extremely complicated back-stories, and gravel-tongued voice acting.

For me, the Metal Gear Solid series represents the ultimate fusion of Hollywood logic, comic book logic, videogame logic, and real-life history. It’s the place where all forms of modern visual storytelling come together. Whether you enjoy the games or not, you have to admit that synthesizing that many narrative languages into one style is something to be respected.

Metal Gear Solid: Peace Walker is technically the sixth entry in the Metal Gear Solid storyline, and the second for the PSP. It’s a direct sequel to Metal Gear Solid: Portable Ops, but in many ways, it glosses over that underappreciated title, and instead takes its cues from Metal Gear Solid 3: Snake Eater. It’s also a lot like Monster Hunter Tri and Pokémon, with a little dash of Pooyan thrown in for good measure.

This is a weird game, even by Metal Gear Solid standards. Hit the jump to find out if it’s any good. 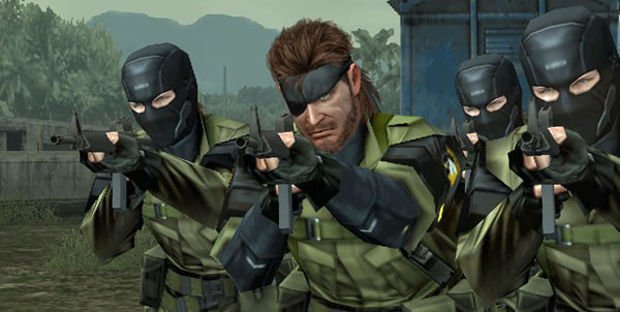 Within the first half hour of Peace Walker, you’ll be using unexplained X-ray vision to look through a girl’s clothes to check out her underwear while in the midst of a serious discussion regarding potential nuclear warfare. My first thought was, “Yep, this is a Metal Gear game, alright.” After that, things get even weirder. The game manages to screw up the Metal Gear Solid gameplay formula something fierce, while simultaneously expanding on it in incredible ways. A lot of my favorite aspects of Peace Walker‘s direct predecessors, Metal Gear Solid: Portable Ops and Metal Gear Solid 3, are notably absent from Peace Walker, but plenty of awesome additions have taken their place. It’s a game that’s pissed me off many times due to its shabby design, but for every moment of frustration, it offers two of absolute brilliance.

There’s a lot to say here. Let’s start with where the game goes wrong.

You know how in Metal Gear Solid games, it’s exciting and fun to run away from enemy soldiers after you’ve been spotted? You’re forced to go run and hide, usually by crawling on your belly under a truck or some shack, maybe a random piece of scaffolding. That’s gone from Peace Walker. Sure, you can still get spotted by enemy soldiers, which sends them after you in droves, but the ability to crawl into hiding spots on your belly is gone. Now the thing to do is crouch near a wall, and shoot anyone who gets close to you in the face. You’ll either get killed, or eventually kill more soldiers than the enemy is able to send after you. The danger is still there, but hiding doesn’t really factor into the equation anymore. Metal Gear Solid 4‘s promise of “No place to Hide(o)” has finally come to fruition, and it sort of sucks. 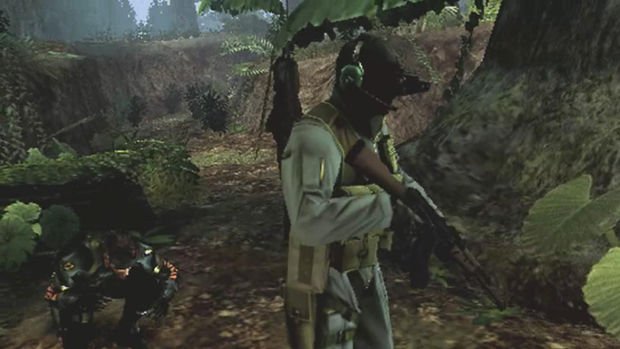 The game also combines archaic bits of design with modern action game conventions in a generally frustrating way. Its camera is pretty awful, particularly when you’re on the run. No matter which control scheme you choose, there is no way to run, adjust the camera, and have full access to your various abilities at the same time. If you’re trying to run and attack at the same time, you won’t be able to adjust the camera. If the game utilized the classic Metal Gear Solid 1-3 overhead camera, that wouldn’t be a problem, but instead, the camera is usually in tight, making anything to the left or right, or behind you, nearly impossible to see. Maybe to compensate for that, Snake now has regenerating health.

Lie on your stomach for long enough, and you’ll start to get your health back. This greatly decreases your need for health items. In fact, I ran out of ammo in the game much more often than I ran out of rations of corn chips. That caused me to waste at least an hour or two fighting against bosses, surviving due to my healing factor, but in the end, being forced to lose because I eventually ran out of ammo. That made the game less fun, and the only reason for it comes down to Kojima Productions’ attempt to copy the modern, Western-style shooter. It’s sad to see Metal Gear chasing after the design choices of newer (and in my opinion, lesser) games, and it’s irritating to see them fail in the process. 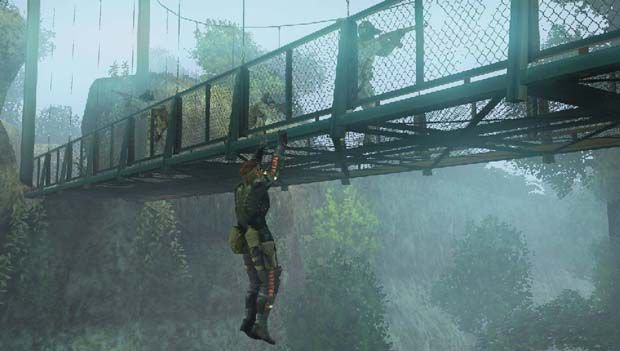 Those are all the things that initially bugged me about the game. Over time, probably near the halfway mark of the game, none of them really bothered me anymore. It’s not that they didn’t impact my enjoyment of the game; it’s just that my standards had changed. They didn’t call this game Metal Gear Solid 5 for a reason: it’s just not quite up to the standards of the numbered games in the series.

Once I accepted that and really got into the game, I learned to love it, and there really is a lot to love here. For starters, the game shows us the final chapter in Naked Snake’s story. Despite a few unlikely rendezvous that feel a little forced at times, this is one of the better Metal Gear stories — it’s more economically expressed and direct that most other games in the series.

Peace Walker marks a major turning point for the Metal Gear story as a whole. It’s also an interesting standalone character study of Naked Snake. Metal Gear Solid: Portable Ops showed the man in transition between being a lone soldier and a leader. By the end of Peace Walker, he is 100% Big Boss, having come to terms with who he is and what he believes in relative to the world around him, and to the memory of his beloved mentor. The Boss’s shadow is over Naked Snake for nearly all of the game, which makes for some interesting narrative while closely tying the game to Metal Gear Solid 3.

Speaking of Metal Gear Solid 3, if you ever wanted to see Ashley Wood adapt the game into a comic book (as he did with Metal Gear Solid 1 and 2), this is the closest you’re going to get. Mr. Wood is the guest artist for the game, tasked with illustrating most of the game’s cut scenes, and his work here is strikingly beautiful. It’s also animated much of the time, and though additional frames of animation are few and far between, things are still smooth and convincing, particularly when the game’s brutal, creepy machines rear their ugly… heads? CPUs?

The game lacks the kind of one-on-one boss fights between Snake and similarly silly-named soldiers that Metal Gear Solid fans have come to expect, but it makes up for it with a series of man-on-mech battles that are simply astounding. These fights can be extremely tough, and they require a lot of time, patience, risk-taking, and strategy. Many of the game’s campaign missions are fairly forgettable (rescue the P.O.W.s, get to the escape route in a limited amount of time), but the game’s boss fights will sit with me for a long time. That’s not even including the amazing cameos from multiple Monster Hunter bosses, unlocked by hardworking players who are willing to jump through a few hoops. Combining these dino-dragons with traditional Metal Gear action is surprisingly seamless. 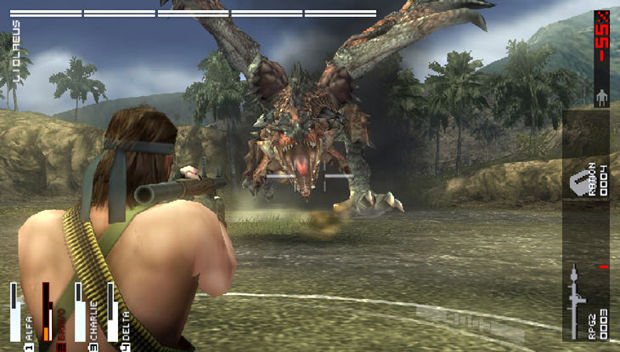 Part of that is because of the game’s four-player online co-op. It feels like Monster Hunter, and it really works. Like I previously mentioned, the game also has its moments of reverence to Japan’s other super-huge portable RPG, Pokémon. Using the ridiculous-but-radical Fulton delivery system, Snake can kidnap and convert any enemy soldier into a member of his Outer Heaven army. By the end of the game, you’ll have collected hundreds of soldiers (even one based on Kojima himself) who can be put to work on any number of things. You can even take them out to war in a watered-down, auto-combat, Advance Wars-style tactical mini-game.

This isn’t the first time you could convert enemies to Snake’s side. Catching ’em all was also a major part of Portable Ops. But Peace Walker takes those ideas and really fleshes them out. Raising the levels of your army and your weapons, as well as using your team and your skills to discover new items and new secrets, are all regular events. You can also capture tanks, helicopters, and other various (ahem) “gears.” Where Portable Ops gave you the feeling of forming your own guerrilla task force, Peace Walker puts you in charge of creating a full-on army. To quote that lady in that song, “What a thrill…” 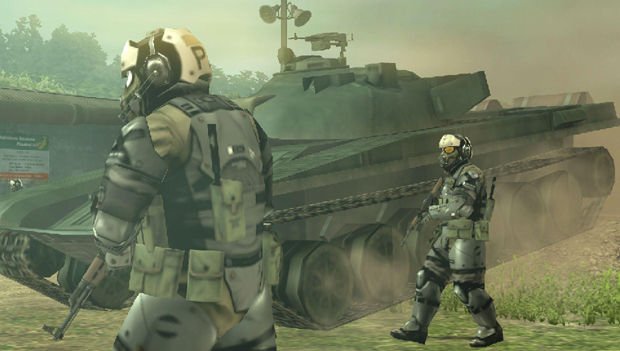 I know I’m forgetting something. Did I mention that the graphics are fantastic? Probably not. Did I mention that instead of an iPod, the game arms you with a Sony Walkman? Probably not. Did I get into the game’s deep connection to the ethics of war, the meaning of peace, and the concept of real-world nuclear deterrents? Definitely not, because doing that topic any justice at all would probably take ten paragraphs on its own. In fact, this is a review that could easily go on for days. The game is really that dense with features and extras. I’ve been at it for more than 20 hours, and I’m sure there’s still more I haven’t seen.

In closing, I love this game. It’s not quite a show-stopper like Metal Gear Solid 4, or the total package like Metal Gear Solid 3, but in many ways, it’s the most progressive game in the Metal Gear Solid series since the original. There are some painful flaws to how Peace Walker plays, and a lot of the missions are forgettable though fun, but those issues weren’t enough to keep me from having a great time with this game. There is enough greatness to compensate for a crappy camera and the loss of belly crawling. I give the game an…