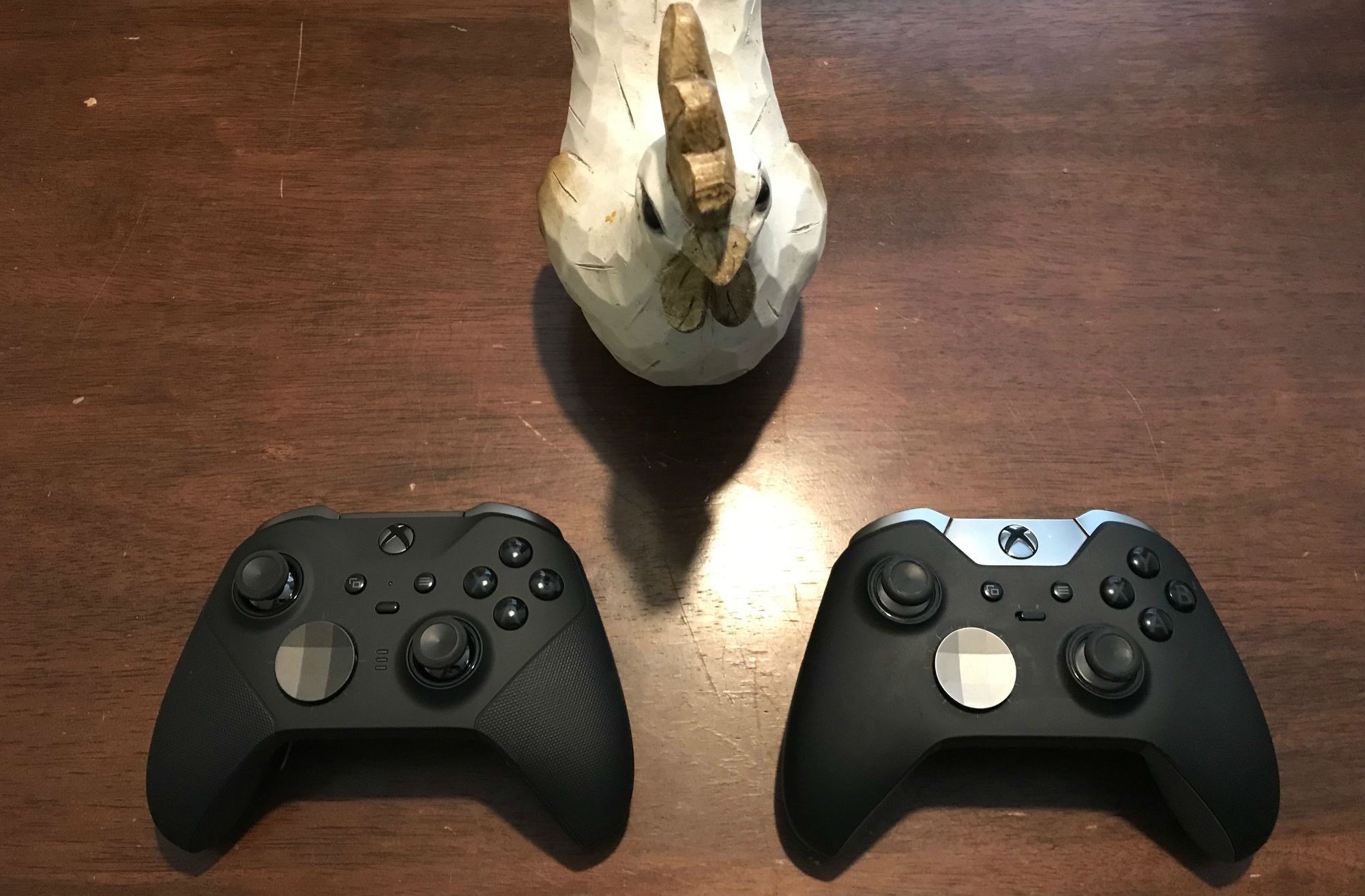 Microsoft has been making huge strides this generation and a lot of people haven’t noticed.

Look, I get that we shouldn’t forget the initial draconian DRM reveal for the Xbox One. But when people were excited to find out that Sony is focusing on haptic feedback for their new PlayStation 5 controllers (presumably the DualShock 5), my first thought was “Microsoft had that as a basic feature in 2013.”

One of those massive strides happens to be the Elite Controller, which is getting an update next month in the form of the Elite Series 2: we’ve tested it. Oh, and Microsoft sent the new Taco Bell Xbox One X along with it, which makes the iconic “dong” noise when you turn it on. I have a story for that!

First up, take a look at this picture: the one in the header with the chicken (see, I gave you a reference point that just happens to be my favorite animal). Can you tell them apart?

The one on the left is the new Series 2, the one on the right is the old Elite, which was somehow introduced in 2015 and still feels super new. The easiest way to tell them apart is by the new rubberized grips on the Series 2, the lack of a steel finish at the top, and the three little lights (for different profiles/family members) between the d-pad and the analog stick instead of a small 1-2 physical toggle.

It’s hard to say that the Series 2 is a “huge upgrade” compared to the original, because the first Elite was a slam dunk. It’s been my go-to remote for the better part of four years, and as our own Brett Makedonski has stated in the past, “it makes other controllers feel like toys,” which is a perfect way to put it. That said, it is indeed an upgrade. Let’s start with what you get for this big-boy $180 MSRP Series 2 buy.

The full kit comes with the controller (duh), a carrying case (like the original), a charging dock (with a USB-C cable to hook up to the back of it), plus two interchangeable d-pads, six thumbsticks, four paddles, and a thumbstick adjustment tool. In case you aren’t familiar with the whole Elite suite, you can customize the remote to your liking with any thumbstick or d-pad you feel comfortable with, as well as add-on paddles (they go in the very back) that function as extra buttons.

So if you want to remap “LP+HP” in a fighting game that triggers an EX move or a grapple to a paddle, you can do that. Similarly, you can also remap them as the primary firing triggers for shooters, or the jump button for platformers — whatever you want. This not only opens up new ways to use the same controller you’ve been used to since the DualShock 1, but it also allows for succinct parameter tweaking for individual games through the Xbox One’s software.

Updating the Series 2 works exactly the same way as in the past: go to the Xbox Accessories app, and it’ll take care of the rest. From there you can create an excessive 250 (!) profiles for individual games or family members, then install three of them to select from with that fancy light interface I mentioned earlier. The main course, raw upgrades: shorter hair trigger locks, wrap-around rubberized grip, adjustable tension thumbsticks, those extra profiles.

That’s what you’re getting with the Series 2, which actually isn’t that big of a step up, price-wise, from the original. (The Elite Series 1 has held its value fairly well, and you probably wouldn’t want to buy used thanks to some early part troubles.) We have no idea if the Elite Series 2 will suffer the same fate over a period of multiple years of use, but for now, it feels sturdy. It’s also damn useful.

The included USB-C cable is a godsend if you don’t have Bluetooth support for your laptop or PC, allowing you to instantly use it in tandem with the new charging station. Microsoft claims the Series 2 can get up to 40 hours of charge life: a 10-hour upgrade from the Series 1 (which used batteries by default). Now while I have gamed for roughly 48 hours straight in the past (don’t do it, kids), I can’t imagine needing more than 40 hours on a charge before docking it and taking a break. 40 hours is cruising into that carefree “never need to regularly charge” Switch Pro Controller life. The Series 2 also has an audio jack and Bluetooth support if you want to go wireless.

While that aforementioned go-hard session wasn’t with the Elite (it was by way of swapping out two DualShock 4s to play FFXIV while the other was charging), I have had all-day sessions with my original Elite, and the Series 2 is going to make those moments more comfortable. The rubberized grip, now standard in the new “S” class remotes, makes a world of difference when it spans the front of the controller.

It’s such a ridiculous obsolescence-level incremental upgrade, but an upgrade nonetheless. My favorite tiny-thing quality-of-life enhancement? Mapping a new paddle to “Xbox, record that/take a screenshot.” The base recording functionality of any current console is clunky, and I doubt many of you still have your Kinect hooked up for instant voice support. The Xbox icon is also firmer and feels like an actual button.

While I need to really put it through its paces in the months to come (give me FFXIV on Xbox One, Microsoft, or I guess I’ll wait for Phantasy Star Online 2‘s western release), it’s clear that the Series 2 is better. Whether additional profiles or smaller pro-gamer level enhancements are worth another $180 of your cash is up for debate, as I think most casual to hardcore players will be fine with the Series 1. If you don’t have an Elite at all yet though and play on Xbox One and/or PC, now is a good time to jump in.

Don’t close this tab just yet — there’s a Part Deux to this story! Microsoft also sent out a limited edition Taco Bell Xbox One X for testing with the Elite Controller.

Amazingly, my history with Xbox has come full circle. All the way back in 2001, I actually won my first original Xbox by way of a Taco Bell giveaway. I was the first person in my friend group to own one— and basically sold 10 more people on them — which created endless Halo LAN parties, facilitated by my RJ-45 cable-creation vocation training in high school. It was a wild happenstance, and getting a Taco Bell Xbox for my job nearly two decades later is a magical moment of its own.

As far as the Xbox itself, it’s not all that different from the original Xbox One X launch unit. Here’s a side-by-side comparison. Can you tell them apart? It’s not so easy at first glance if you didn’t know what you were looking for! The Taco Bell version has a metallic sheen to it, but there are no discernible aesthetic indications that it is indeed a Taco Bell box: no crazy purple or pink lettering or a logo. It even has the same front and back.

For some people, that’s an upgrade — not having to sell Taco Bell every time someone comes over (or in the case of the innards, an easy installation when you just unplug everything and plug it back in)! But there is one huge dead giveaway: turning it on will play the memorable marketing “dong” jingle (no, really), but turning it off is the same old beeping noise. Given that Taco Bell has gotten me through some rough times on the road when I first became a vegetarian and no other fast food place had options, I’ll allow it.

The Xbox One Elite Series 2 is out on November 4 at major retailers and the Microsoft Store. As for the Taco Bell Box, you have to win it.

[This assessment is based on hardware provided by the manufacturer.]