Another high-profile, A-list game means on thing: Merchandising. It was inevitable, with Mass Effect‘s being one the biggest games of the year, that we’d see some tie-in products. Some work well, while others clearly do not.

Recently, I had a chance to check out three new products aimed at Mass Effect 3 fans: the wall decal, Vault armor case, and Bishoujo statue released in conjunction with the game. Are they worth your time and, ultimately, your money? 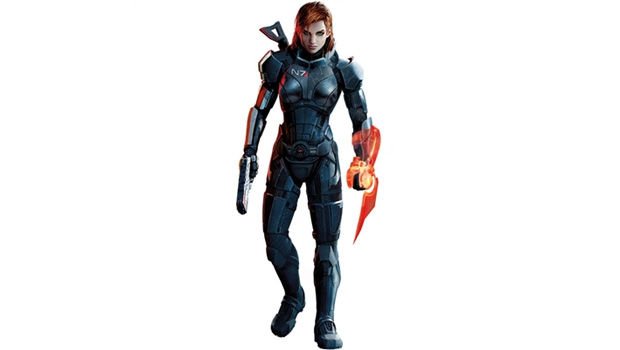 First up is the wall decal from Walls 360 Inc. Much like the sports icons by Fathead, this is an image of a character or ship from the game that can be displayed on your wall or door. The product I was sent is a life-size FemShep, and the first thing I noticed is how damn BIG the thing is. Life-size means LIFE-SIZE, which is to say that FemShep must be 5’8″, because the damn decal is just as tall as me. The Walls 360 site does offer many different decals in a variety of sizes and prices, beginning at $15 for the smallest (5″ X 12″) and up to $165 for the largest (40″ X 96″).

Since I’m your typical nerd and posters already adorn my walls, the best place to stick this character was directly on the door to my office. The decal itself is a vinyl-like material, much like the higher quality stickers you would get from your favorite band or event. It’s meant to be removed and replaced repeatedly, so the decal is sturdy and doesn’t tear easily. As for the adhesive, attention should be paid during application so as to prevent bubbles or folds from forming. I’m not sure how many removals and re-applications the decal can take, but it seemed to do the initial job well enough.

Despite being such an enlarged image, there is no pixelation and all the colors and details pop as you would expect them to. This is high quality, and anyone who is a fan of the game would more than likely adorn their dorm room with this visage. 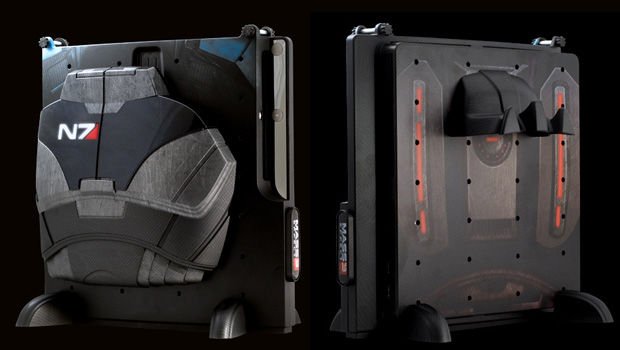 Next up is the N7 Collector’s Edition Vault by Calibur11. This is described as a high-quality armor for your system, designed to protect and promote airflow. There’s a pretty hefty price tag for this “armor” ($89.99), but it also comes with some Mass Effect 3 multiplayer DLC. I’m not sure if that’s worth the price alone, though.

The “armor” in question is two large sheets of thick-yet-slightly-flimsy plastic with holes in them (“to promote airflow”) that are set on either side of the system and held in place with plastic screws and aluminum spacers. There’s an optional stand and controller cradle for standing the system upright, which I recommend, as laying it flat probably won’t help the airflow much. However, your mileage may vary as to how exactly you are able to set up your system.

On the top sheet of the Vault is a heavy plastic piece that resembles Commander Shepard’s chest plate, complete with light-up N7 logo. Batteries are already included, but replacing them involves detaching the chest plate completely, which is difficult to do without taking the entire armor off your system.

For something that is supposed to be “heavy plastic,” it looks pretty cheap and flimsy. Considering the price tag of the Vault, I’m not sure anyone who opens up the package and slaps these cumbersome, heavy plates onto their system will feel justified in their purchase, unless they’re a VERY hardcore fan. That said, if you love Mass Effect 3, this looks kind of cool… but only kind of.

With the Vault on my system (I tested this on the Slim PS3), there was no noticeable heat increase while playing, though I do recommend keeping it upright for the vents on the bottom. Otherwise, you’ve got a heavy bit of plastic with Shepard’s armor on one side, sitting on another flimsy plastic piece with vents. That just seems to be a recipe for overheating your system. Honestly, I would think NOT putting large hunks of plastic on your system would keep it cooler, but it wouldn’t look as snazzy. Plus, how else will you show it off?

For the money, however, unless you absolutely MUST have everything Mass Effect, it’s very steep indeed. The wall decal is cool enough, but the Vault armor is just a bit too decadent for the price of plastic. Again, there is the “Reinforcement Pack” DLC included, but more on that later. 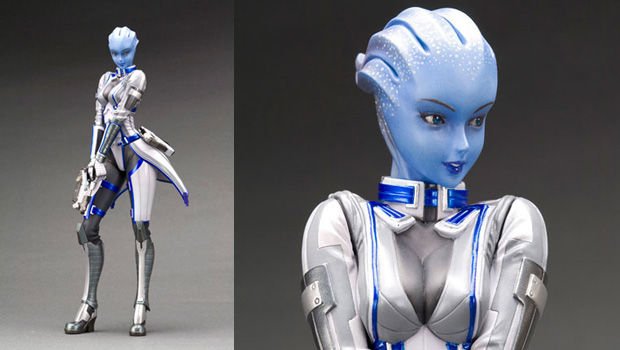 Finally, there’s the Mass Effect Bishoujo Statue of Liara T’Soni ($59.99) by Kotobukiya. The Bishoujo line showcases female pop culture characters with hints of anime and manga influences in the design.

Kotobukiya stresses that, because the people of Liara’s Asari race aren’t any specific gender, this is the first Bishoujo statue that isn’t technically “female.” As such, the pose itself is a little less, shall we say, “cheesecake” than the rest of the line. There are still the hints of the line’s hallmarks — Liara is pushing her boobs together while gripping her M5 Phalanx pistol. The paint apps are especially nice, giving the look of skin-tight fabric, despite its obviously being painted. I will say that the mold of the Phalanx and the Predator on her hip are nice, but on one side, the Phalanx lists its number as “5M” instead of “M5.”

The statue stands at about 10 inches tall, which fits in well with the rest of the line, and it sits nicely on the included translucent base via two pegs that insert into her boots. There are two labels you can insert into the base, customizing it with either the Mass Effect 3 logo or the N7 symbol. There’s not much to say about the statue, really, other than that it looks great. While some folks may not enjoy the anime style they went with the sculpt, I really enjoy it, and it adds to the Asari’s already entrancing looks. The statue looks great when set next to the other Bishoujo figures but also fits in well with your other game statues, like the Nathan Drake Uncharted 3 statue that came with that title’s limited edition.

It’s important to note that both the Liara statue as well as the Vault armor case both come with the same multiplayer DLC, the “Reinforcement Pack.” If you’re trying to decide which collectible to add to your home, this plus the price may be a strong influence. The Reinforcement Packs is another in-game items pack used in the four-player co-op multiplayer campaign in Mass Effect 3 on PC or Xbox 360 that includes the Collector Assault Rifle as well as various character-building power-ups.

There’s plenty to choose from here, if merchandising is your thing, and there’s sure to be even more coming.