In 2007, Capcom’s Lost Planet: Extreme Condition was a decent start for a franchise. It featured stunning graphics that drove home the point of high-definition “next-gen” visuals, with massive, elaborately detailed monster boss battles like we hadn’t seen before. It shipped with a decent multiplayer mode that Capcom continued to support, due to gamer interest, well past the game’s initial release.

Things were looking good when the publisher announced Lost Planet 2, a title that gamers hoped would trump the original, bringing with it a four-player cooperative campaign. Four players together? Killing huge monsters online? If Capcom could just address some of the issues players had with the original, what could possibly go wrong?

As it turns out, just about everything. 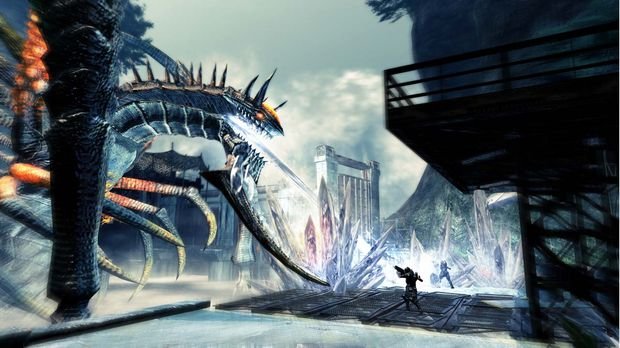 The story of Lost Planet 2 starts ten years after the events of the first title. There’s some stuff happening — a civil war, I think — and people are fighting over Thermal Energy (T-ENG), a precious substance that man is simply willing to die for. And something about snow pirates and big insect-monsters called the Akrid. Heads up: this description isn’t a rough draft or anything, it’s just that following the muddled story of Lost Planet 2 is mostly confusing and pointless; despite slick, Hollywood action movie-style cut-scenes, there’s little substance, and it’s probably in your best interest to ignore it anyhow.

But who cares — this game’s about killing big monsters with your friends, and using big guns with even bigger mech-style suits, rights? That should be fun, right? Not quite. The unfortunate reality of Lost Planet 2 is that it’s a title so cluttered by poor and dated design choices that even the simple “kill some crap with your buddies” formula can’t save it from itself.

In the sequel, the story-driven single-player campaign of the original has been replaced by a cooperative campaign, which can be played with a team of up to 4 players, human or A.I. You can go it alone if you wish, but take note that you’re always going to be playing a cooperative campaign, regardless. As the game begins, you’re asked to “start a game” and are thrown into an online-style lobby where you’ll choose your settings before you start. And once it does, you’ll realize that at no point did Capcom intend for you to be playing this alone, or like your standard story-driven title. 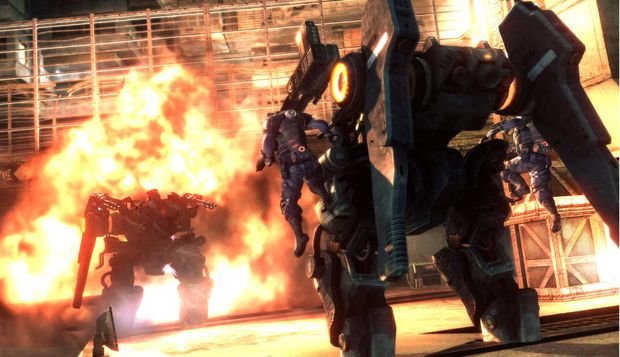 Campaigns are broken up into small, bite-sized levels, each of which begins with an online multiplayer-style countdown as the action begins. Unlike the original title, these levels don’t feel like fully formed or fleshed-out game experiences; instead, each seems like a quick, online multiplayer instance that begins and ends with a countdown. The result is an experience that is far less cohesive than it should be, with the game’s cut-scenes struggling to keep things together.

While the game will allow you to go it alone, you’re encouraged to bring along three others for the ride, which may mean you’ll end up relying on A.I. to help you through the campaign. Bad idea. Your computer-controlled partners are about as useful against the Akrid threat as a bag of wet rags. They’ll mostly meander around doing nothing unless you take the lead, and even then it’s unlikely they’ll provide any real assistance in your fight. It becomes obvious very early on that teaming up with human players is desirable, but doing so brings up a whole new set of issues.

It’s as if Capcom went out of its way to make playing Lost Planet 2 with friends as difficult as possible. For starters, the game features no true drop-in and drop-out play. What this means is that if a game has already begun, you’ll have to wait until those in the game reach a checkpoint or complete a stage in order for you to start participating. This wouldn’t be so bad if some checkpoints weren’t spread so far apart, which could have you or your friends waiting upwards of ten minutes before they can even get in on the action. Additionally, there’s no way to pause the game — if you need to get up and use the bathroom, you can bring up a menu overlay, but the action will still continue. It would have been preferable if the action paused for all players, or if the A.I. (as stupid as it is) tried to hold its own like in Valve’s Left 4 Dead. (In addition, you can’t really pause when playing the game alone, either; on more than one occasion I couldn’t stop the game and returned to find that I had been killed and subsequently respawned while I was away.) 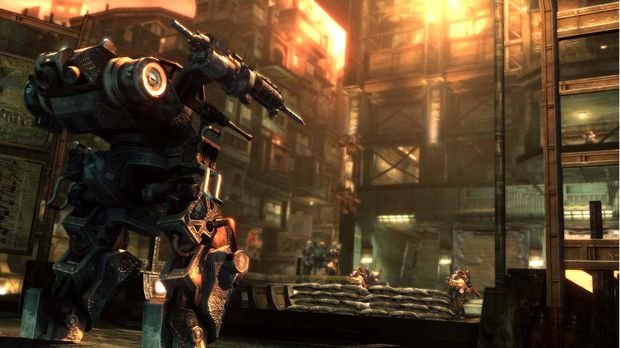 It should be noted that once you do get into a game with three other friends, the normally jarring and plodding campaign is slightly more tolerable. I say slightly because bringing friends along for the ride doesn’t alleviate the inherent problems that cripple the title. The game’s controls feel sluggish and dated, with the default controls being confusing at best, and alternate settings not faring much better. Player characters move like they’re wading through molasses; the game even seems to have a “power walk” button in place of the standard “run.” The grappling hook from the first game also makes a return, but seems even more useless and frustrating this time around — what you can connect to is inconsistent throughout the world, and the fact that you can’t deploy it when jumping is absolutely baffling.

The game’s campaign goals aren’t even particularly interesting, with or without buddies. Too many of them involve running around and activating data posts, to the point where it’s comical. This gameplay mechanic involves running up to a post and tapping a single button repeatedly; friends can join in on the action to make it go faster. Other levels have you activating other types of posts by tapping that same button repeatedly, and then defending said posts from incoming enemies. If you fail to do so — you guessed it — you’ll just have to activate it again.

It’s not all bad, though. It has to be noted that what is probably attracting you to Lost Planet 2 — those big-ass monsters you’ve seen in screenshots and trailers — are scattered liberally throughout the campaign. Capcom’s MT Framework engine is able to push some gorgeous visuals here, bringing some terrifyingly awesome “Category G”  Akrids to life, some of which tower over players like giants. 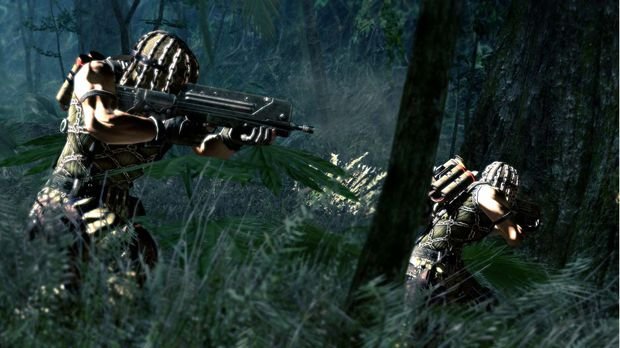 Of course, Capcom managed to bungle this as well — the introduction of the beasts is tremendously exciting and worth experiencing, but the actual battle is not. Each one simply involves firing endless streams of bullets or rockets at the enemy’s large, glowing weak points, sometimes for upwards of 15 or 20 minutes at a time. What you think is going to be an incredibly exhilarating battle is quickly exposed as a chore — particularly if and when your team fails, and you end up losing 40 minutes of gameplay as you’re sent back to the last checkpoint… which was 15 minutes before you fought the creature.

Lost Planet 2 also ships with a pretty extensive and full-featured multiplayer component, which is where you’ll likely spend most of your time. There’s a huge variety of modes to choose from, from competitive deathmatch games to team-based options like the capture-the-flag-inspired “Akrid Egg Battle.” This multiplayer mode is also where you’ll use and discover most of the game’s weapons, vehicles, and vital suits. It’s impressive how much content they were able to include in the game, and it’s probably Lost Planet 2‘s biggest strength. It’s actually a bit of fun discovering how to use and operate the game’s vehicles and mech suits, many of which have their own unique control schemes.

Unfortunately (here it comes!), the multiplayer modes suffer from many of the core issues that mar the cooperative campaign, including sluggish controls and an counterintuitive, dated interface. The game even has a character progression system that’s unified between both multiplayer and cooperative, but it’s far more confusing than it ought to be. As confusing as it is, the game does absolutely nothing to explain how the progression works and how you’ll unlock new items, which involves an in-game slot machine that mostly ends up giving you useless titles and taunt animations instead of anything you’ll actually want. 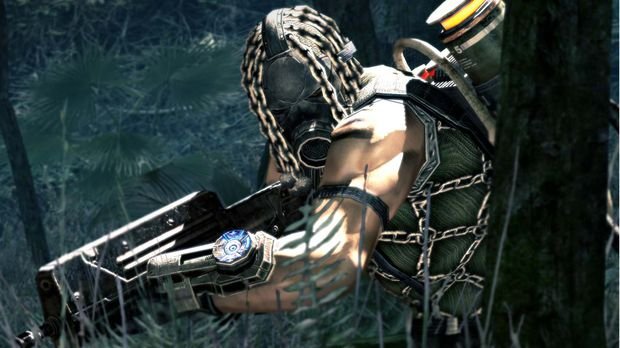 I can see those with a bit of patience and a high tolerance for illogical design enjoying the multiplayer, with a massive cache of weapons and vehicles that can be used across the game’s many and varied map styles. But all-in-all, Lost Planet 2 seems like a missed opportunity, with the developers ignoring many of the staples of so many great shooters that are already flooding the market.

It’s downright frustrating, actually, as with even the slightest tweaks, Lost Planet 2 could have been another winner for Capcom, and the epic sequel fans had hoped for. As it stands, Lost Planet 2 is a shell of a potentially great game, brought down by bizarre, dated, and counterintuitive design decisions. And that’s a shame.