Our first 24 hours in Tamriel

[We’ll be reviewing The Elder Scrolls Online over an extended period of time. For more details, check out our new Reviews in Progress program.]

In many ways ZeniMax is fighting an uphill battle with Elder Scrolls Online. In an era increasingly filled with free-to-play MMOs, subscription-based games are a tougher sell. Then you have the fact that Bethesda isn’t involved in any capacity, and that this is ZeniMax’s first ever MMO.

Yes, there are many things going against The Elder Scrolls Online, but based on my time with the live environment, it’s still a serviceable game — provided you’re highly accustomed to the genre. 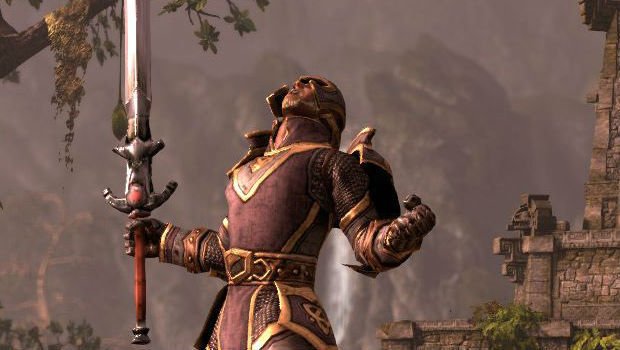 As of right now, I have a level 12 Imperial Dragonknight after roughly 14 hours of play. To break down my character, the Imperial race abilities supplement sword and shield setups, and the Dragonknight class operates as a melee attacker of sorts, with the ability to go DPS (damage) or Tank as you see fit.

Before I begin though, it’s important to realize one thing — you can only select the Imperial race by purchasing the Collector’s Edition, thus locking out a hefty piece of content for standard subscribers. I understand that ZeniMax wants to sell some sort of premium add-on, but MMOs typically go the route of cosmetic items and extra pets (which are already offered) — not something that directly impacts gameplay. I sincerely hope they open up Imperial creation to everyone very soon.

With that out of the way, the Dragonknight class is actually pretty fun, as it’s a mix of both a warrior and mage class in standard RPGs. You’ll have the power to get in close and wreck shop with a weapon of your choice, but you’ll also have a number of magical abilities at your disposal like molten-hot chains that drag your enemy towards you (think Mortal Kombat‘s Scorpion), enchantment powers, and stun/root spells.

Combat as a whole feels more active than most MMOs — but at a price. While I was engaging in particularly tough questlines or dungeons (more on those later), everything just clicked. I wasn’t just wailing my left mouse button to attack on a constant basis — I had to choose my skills effectively, move around, and adapt. It was a refreshing change from most MMOs where you stand in one spot and auto-attack while you cycle through your rotation.

But fighting easy enemies and questing throughout the world does feel repetitive by comparison, because all you really need to do is just hack and slash away with very little thought. Elder Scrolls fans will probably be fine with it, but those of you who get bored easily won’t be pleased — in other words, ESO does not transcend the genre by any means.

You’re able to use the first-person perspective throughout the entire game, which is a much needed and welcome addition since it makes the game feel very different when compared to most MMOs — having said that, the rest of the game is standard fare, to the point where I wouldn’t recommend it to those of you who haven’t already played or enjoyed an MMO. 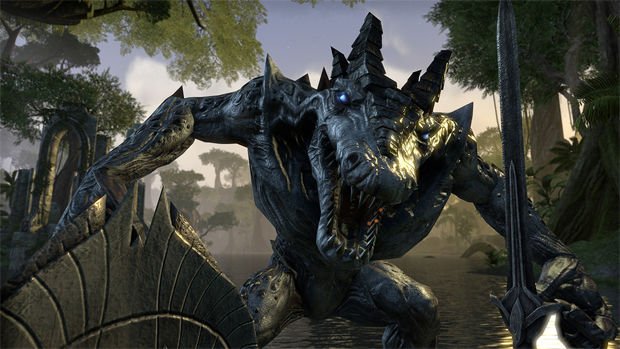 I joined the The Ebonheart Pact, which basically means my early-game zones take place in Morrowind (I couldn’t resist). The Aldmeri and Daggerfall factions start you off in the Summerset Isles and High Rock, respectively — places any Elder Scrolls fan will recognize. But to a non-fan, it looks like a standard fantasy rendition, with very little discernible landmarks in tow. While I was entertained by the constant name-dropping of characters such as Vivec and the like, a lot of people simply won’t care.

The game basically has a mix of Guild Wars and old-school MMO sensibility for questing — and while the systems in place aren’t as complex as the former, the quest system is well designed for the most part. Grouping isn’t necessary for completing most objectives, and I found myself grouping by proxy on many occasions — which were often the most fun experiences I had. It really feels like the multiplayer Elder Scrolls game we’ve always wanted when you play in first-person despite the mundane nature of many of the quests.

That feeling came to a head when I played my first two dungeons (available at level 11): the Fungal Grotto and Spindleclutch. These are filled with group encounters and boss fights are a far beyond anything the franchise has ever seen before, and are extremely satisfying to run through, especially with a group that’s willing to work in tandem. 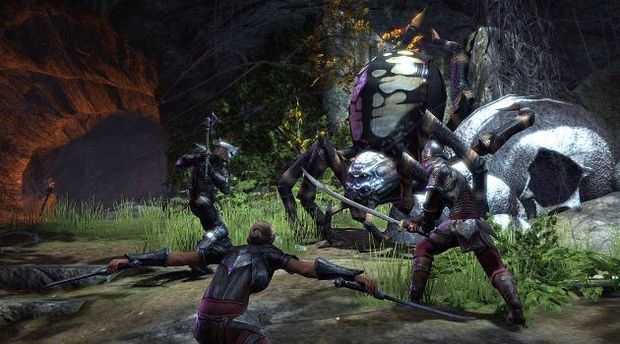 If your passion is getting together with fellow players and figuring out brand new strategies and bosses, The Elder Scrolls Online has delivered so far — I just hope it can keep things rolling with mid- and end-game content. I should also note that the community is very welcoming and helpful in general — especially those who use the looking-for-group function to team up for dungeons. It’s a stark contrast to some of the experiences I’ve encountered in other MMOs.

I’ve only come across a few bugs so far — a far cry from the typical Bethesda release, and impressive for an MMO in general. The major one I ran into temporarily impeded the progress of a major story quest, involving the demonic Balreth boss encounter. To solve the issue of a particular part of the quest not working, I logged out, then back in, didn’t loot the boss, and everything was good to go. Another bug I ran into was the fact that my horse mount dismounted every so often after a jump — almost like some bits and pieces of zones are marked as “non mount zones” — but it’s a minor inconvenience at worst.

There are a few blemishes, however, that veteran MMO players will notice. Right now, there is no player housing, no auction house, no minimap (the series standard top-loaded compass is intact, but mostly inefficient), and no controller support. Thankfully there is mod support, which is the saving grace of ESO in a lot of ways when it comes to modern conveniences. Modders have already created a minimap and other features for the developers, which is good news for players. 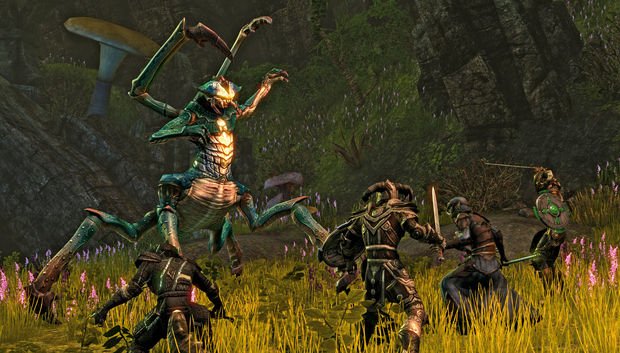