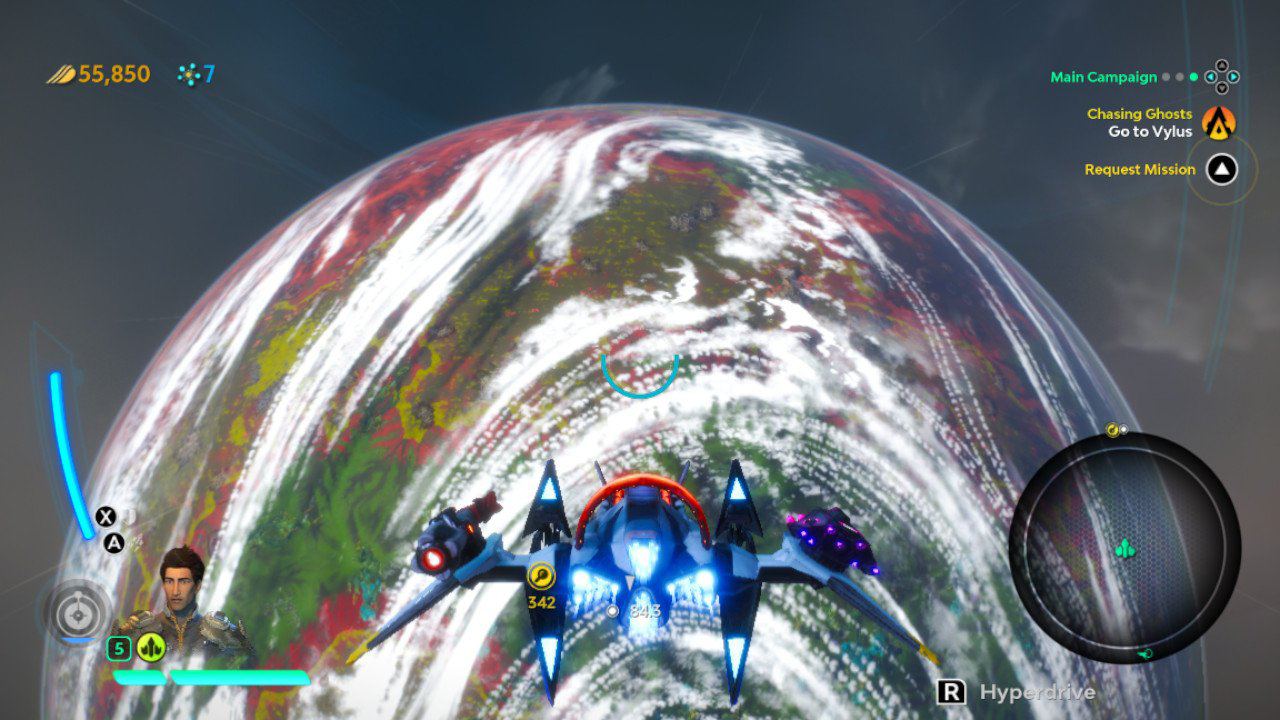 I remember the first time I played a title in the Skylanders series. It was the first game for the Nintendo 3DS. I found it on sale at Best Buy and decided to pick both it and three figures up. When I got home I ended up beating the game in just a few hours, only to find I didn’t actually beat the game. At least not all of it. Skylanders was designed to get you to buy toys, and while I had three figures to go with my game, I didn’t have the right figures to unlock every route, or to see every part of every level.

I could have gone back to the store and purchased the three extra figures I needed to see all Skylanders had to offer, but instead I traded the game in; realizing that while I found the gameplay fun, forcing me to buy more toys just to see slightly different areas in each stage was not something I could bring myself to do. Thankfully, that won’t be an issue with Starlink: Battle for Atlas. 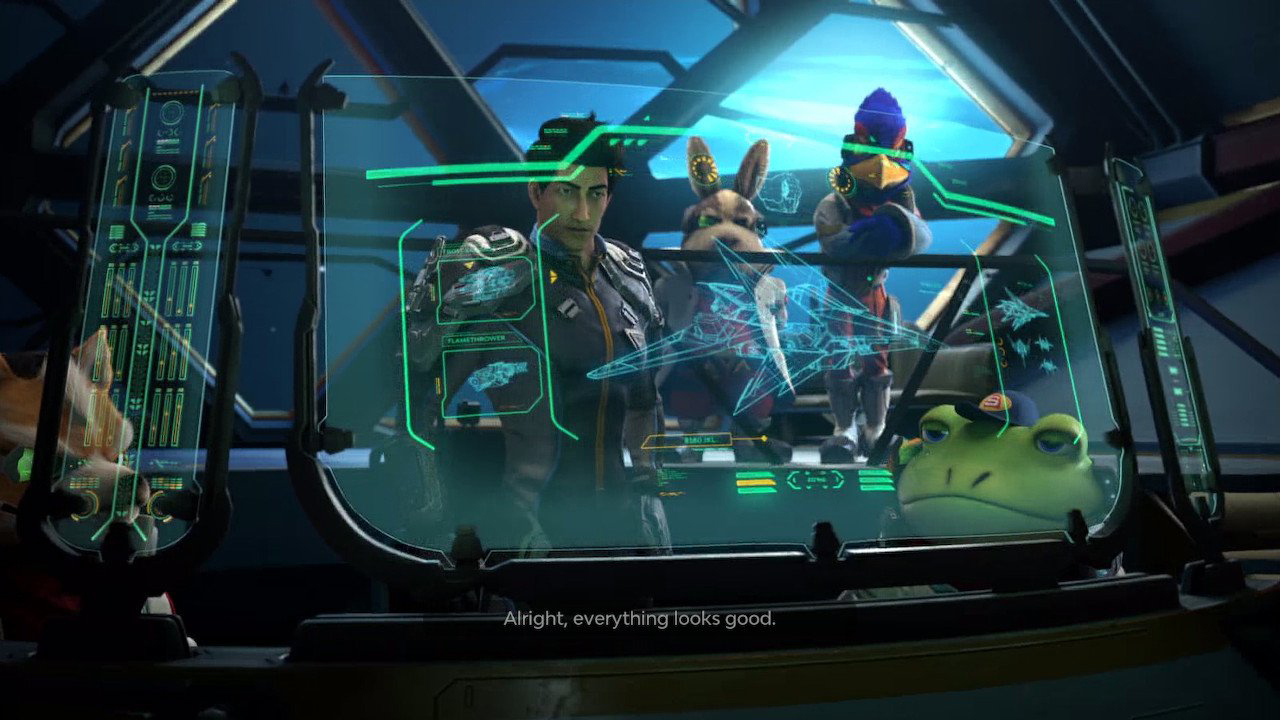 Before I start, I need to be upfront with what Ubisoft provided to me for this review. I was sent the Nintendo Switch starter pack, containing the Star Fox Arwing ship, but with the physical copy of the game taken out. I was also sent three additional toys-to-life ships, one pilot toys-to-life pack, and one toys-to-life weapons pack. To actually play the game, I was sent a code for the digital edition as well as all of the DLC. Needless to say, I have everything I need to play Starlink: Battle for Atlas and then some.

Now, there are two different ways to play Starlink: digital or physical. Physical requires the use of the toys. You’re not bound to them, but there are certain stipulations you should know about. When you plug a ship, pilot, or weapon into the controller dock, you unlock a digital version in-game for seven days. That way you can play Starlink on the go without having to bring the toys with you.

Digital is how I imagine most of you will be playing the game. This gives you access to all the ships you unlock in perpetuity, and, unlike with physical, you can switch your weapons, wings, and ships on the fly. I played through the first planet with my Arwing sitting atop my Joy-Con controller dock and didn’t mind it much (it’s not too heavy) but the frequent need to swap out weapons for the task at hand has kept me in digital mode for the rest of the time I’ve played.

As of this review-in-progress, I am about 14 hours into the game. In that time, I’ve explored four planets and have got a general feel for how the rest of the game is going to play out. Starlink: Battle for Atlas is an open-world space shooter where I, as a member of the Starlink team, am trying to liberate planets in the Altas system from the scourge of the Forgotten Legion. Headed up by Grax, a feathery fellow with a General Grievous gait, the Legion is searching for Nova, an extremely power substance that Starlink’s leader St. Grand just happens to know how to create. St. Grand learned this from Judge, a swarm-like alien creature, who crash-landed on Earth and helped develop the Starlink technology.

Liberating each planet, so far, has followed a similar pattern: I land, eliminate some Imp hives, build some refineries and observatories, destroy a few extractors, and lay waste to the Prime beasts that roam the land. Eliminating the Prime and extractors gives me cores I can use to improve the various complexes I construct on each planet, helping them build a defense network to protect themselves for when I mosey onto the next world.

The Prime beasts are just one of the threats on each planet. There are also cycloptic robots sent by the Legion and outlaws that’ll attack both you and any ships working for the settlements you build. There is a shallow diversity of fauna on each planet, but most of them are non-confrontational. Battles with the cyclops and outlaws don’t really differ from encounter to encounter. The bouts are frequently intense as I glide across the planet’s surface, dodging enemy attacks as I try to take out three or four of them at a time, but with such a small number of enemies in the game, these battles tend to blend into one another. 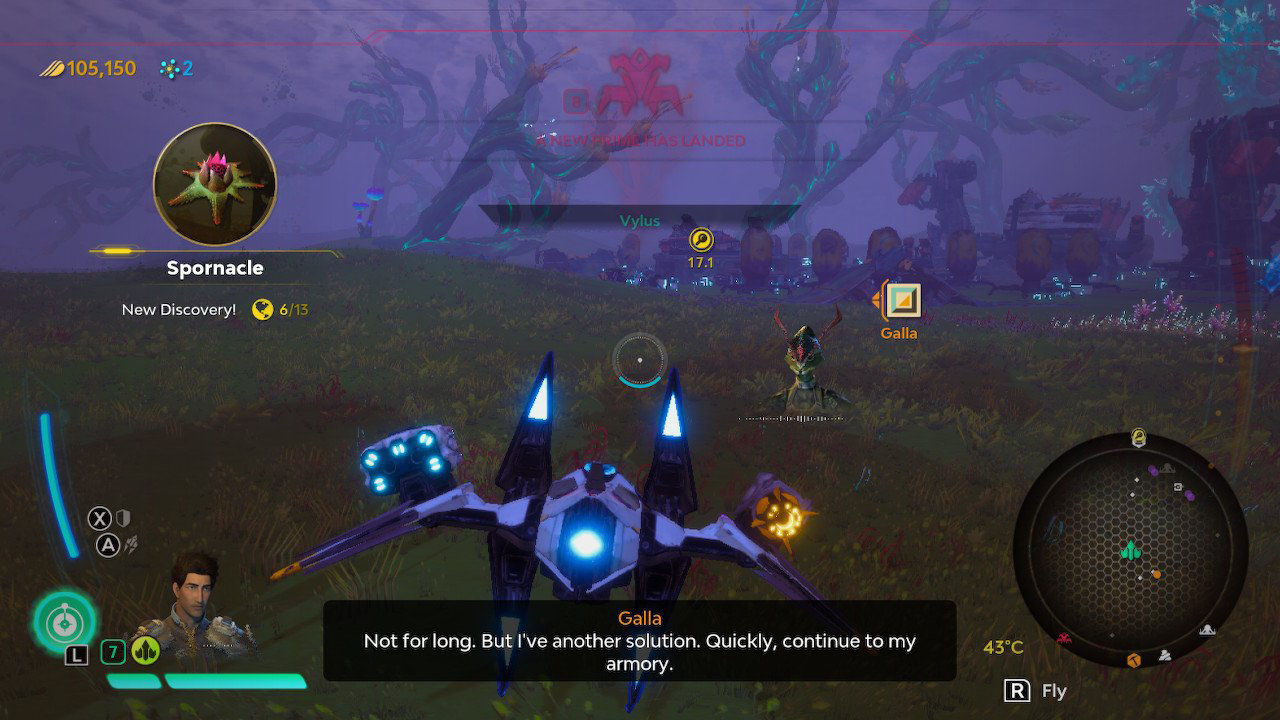 It’s never overwhelming, thanks to the unique weapons system Starlink employs. Each wing of my aircraft can hold a single gun and there are different elemental variations at my disposal. One of the most effective ways to take down foes is to hit them with a Nullifier, which creates a small vortex that does continued damage, and then hitting that vortex with a fire or ice weapon. This creates a fire or ice vortex, helping me bring down an elemental cyclops in a jiffy. There’s a great deal of fun improvisation to be had with the weapons system, keeping the experience fresh even if the objectives I’m tasked with can feel quite repetitive.

It can also feel like busy work. Let me give you one example I’ve come across so far: As part of my journey across the system, I can scan each creature I see to find out exactly what it is. Scanning requires me to do a full 360-degree circle around the animal, and then find two more of the same species and repeat the process. That’s just for my records, but some of the research outposts I discover on these planets will also ask me to scan the animals for their studies. One one of the planets, I was asked to use their scanning device to scan three examples of a giant toad creature I’d already scanned three times for myself. So I found three of these toads and scanned them all again, completing the mission. At the very next outpost I found, they asked me to scan the same damn creature. Doing a full 360 around three creatures of the same species just to discover what it is already feels like overkill. Doing it nine times is flaccid mission design.

There is still a lot for me to see. With the first third of the Atlas system more-or-less safe, I can move onto the unexplored planets of the system, get to work on some of those sidequests I’ve been ignoring, and finally see what the Star Fox missions are all about. To hear about all that and more, check back once the final review for Starlink: Battle for Atlas is posted.

[This review is based on a retail build of the game provided by the publisher. In addition to receiving the Digital Edition of the game, several of the Starlink ships, pilots, and weapons toys-to-life accessories were provided as well.]