The game is better than the title

As a gigantic fan of Jet Set Radio, I had to get my hands on Hover: Revolt of Gamers (hereafter Hover because, god, that title is lame). After hearing that Hideki Naganuma was on board for the music, I almost didn’t care how the game ended up because I knew the soundtrack would be slammin’.

Luckily, the game seems to have a lot of promise after a couple of hours in! 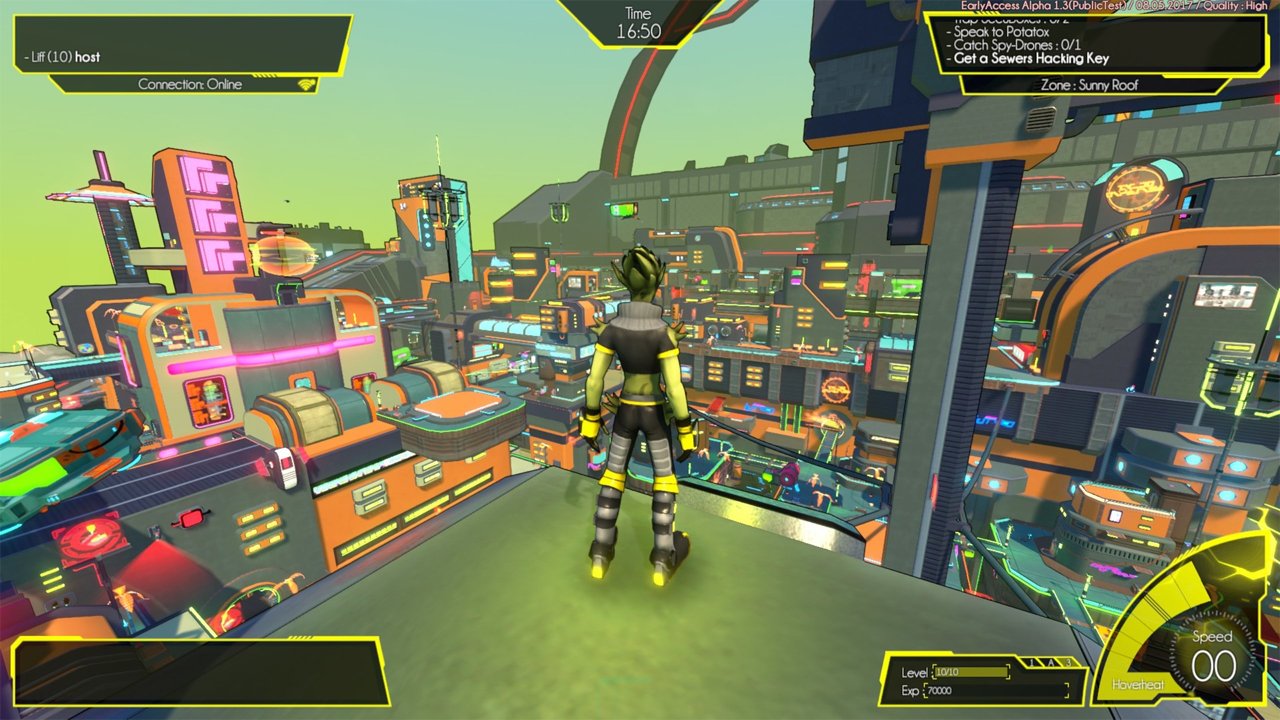 Immediately, I was worried about keyboard controls. I couldn’t get the Xbox controller to work (I didn’t try very hard, but it didn’t just work), so I was left with the clunky mouse and keyboard. Except it’s not clunky, it’s fine! I more or less forgot about figuring out how to use my controller because I instantly felt at home with the traditional PC controls.

So, Hover borrows a lot from Jet Set Radio (JSR) and it shows. I don’t think I’ve ever played a game that quite got the feel of the Dreamcast classic, which is one reason why I play the original annually. It just had an attitude and premise that could not be matched, seemingly ever. But goddamn, if a game were to ever come real close, Hover is that game.

The controls are certainly better than JSR, though realistically that isn’t saying too much. Hover‘s controls feel tight and responsive, and thank goodness there is a grind button. Lots of accidental grinds happened in JSR because there wasn’t a dedicated button. It does feel strange not to have a sprint button though, as there are actual stats for your character that can be improved upon by leveling up and getting little cards that increase specific stats.

I’m not quite sold on the entire “leveling up” mechanic quite yet since so far it all seems so minuscule. Certain things are being increased in increments of 4.5% from some cards. I’m not really feeling the difference there. I’ve just been plopping whatever cards seem the best whenever I can. I’m hoping this gets a little more fleshed out as time goes on. 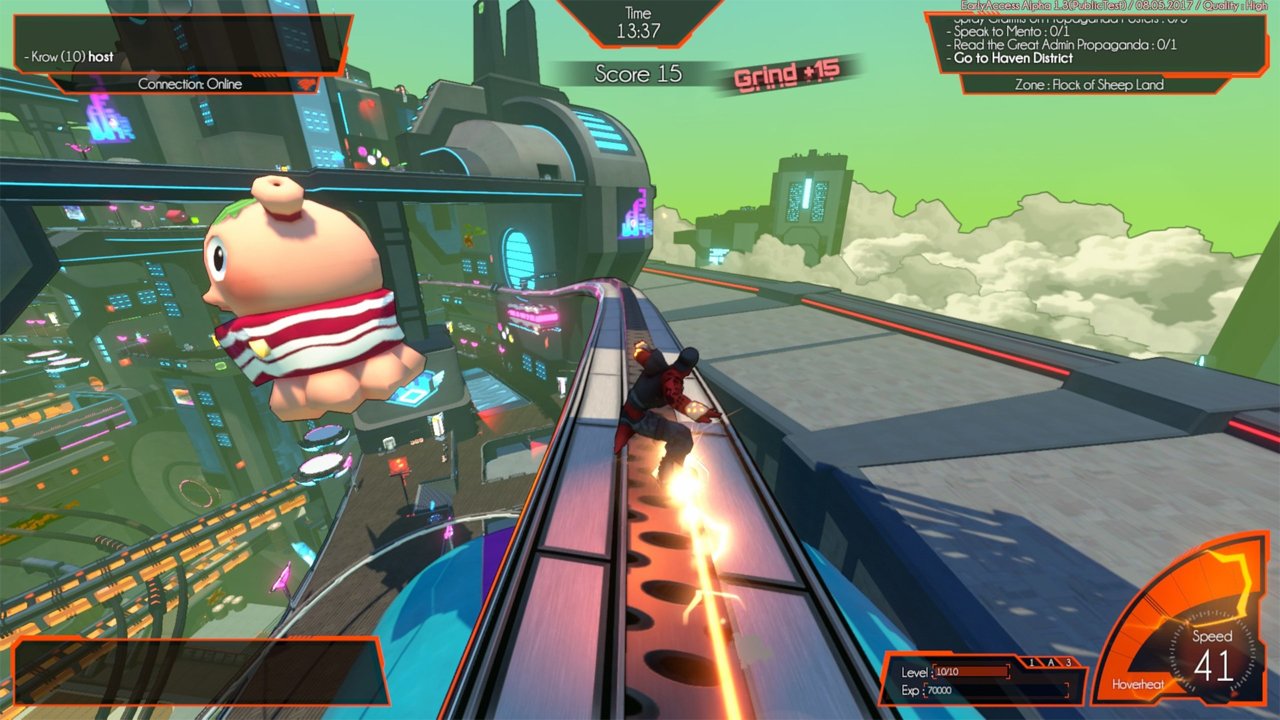 I’m also lukewarm on the character I’ve created. First of all, he’s boring as fuck. I got to pick the color scheme, but the model itself was locked in. It seems that more unlock as time goes on, but still, blech. It’s strange to be part of this alien-like vibrant world and simultaneously be a boring-ass guy in a hoodie and goggles with no personality.

The world definitely has an anti-authority vibe to it, and the neon colors add to the uniqueness. The world has been fun to explore, though the missions feel all over the place. I’m not sure if I’m supposed to be following a specific set of missions or what, but it feels like I’ve started a series of random mission sequences from random people. It’s almost like an MMORPG at times; I’m just taking quests and doing them from anyone I see with a quest marker.

Most of the missions so far have been races, though there have been one or two other types. The races are only as good as the paths they send you on, but I have enjoyed just about all of them so far, even if they have been incredibly easy. Occasionally the course itself will be difficult, but I don’t think the AI has even come close to beating me to the finish line. Still, it’s a great way to get the player exploring various parts of the seemingly gigantic city.

I don’t want to paint this as “Jet Set Radio but not quite,” though that probably would be a fair assessment of the early game. There are more mission types than simple spray painting all the stuff, and in fact, spray painting has been severely diminished. It’s still a mechanic, but so far I’ve just had to click to paint; no gestures or mini-games here. Performing tricks is also included, though it seems quite shallow in terms of what you can do.

The game differentiates itself with a Rewind function, allowing players to reverse their movement in case they done messed it all up. This has already been a lifesaver. At times where I fell off a roof during a race or overshot a gap, I can just Rewind and try that again instead of restarting the mission or climbing way back up. This is a very welcome feature that I plan on using probably way too much.

And of course, the music. With Hideki Naganuma back at the helm, do I really need to gush? OKAY I’LL GUSH. The music is amazing! This man has not lost an iota of talent since I first heard his tracks in 2000. The tracks are fittingly upbeat and techy, blending perfectly with the world and its inhabitants. It would be a shame if they do not release a “Game + OST” version on Steam, or any way to buy the soundtrack, because goddamn I need it!

I’m very happy with how Hover feels to play. It’s progressed the system I love so very much from Jet Set Radio and has given me a new reason to skate around an unknown city. I hope that the game can make me care about my actual character as I progress, I’m excited to be able to play online with others and hope that the game can smooth out some of its rough edges to deliver a well-rounded project.

Filed under... #reviews in progress