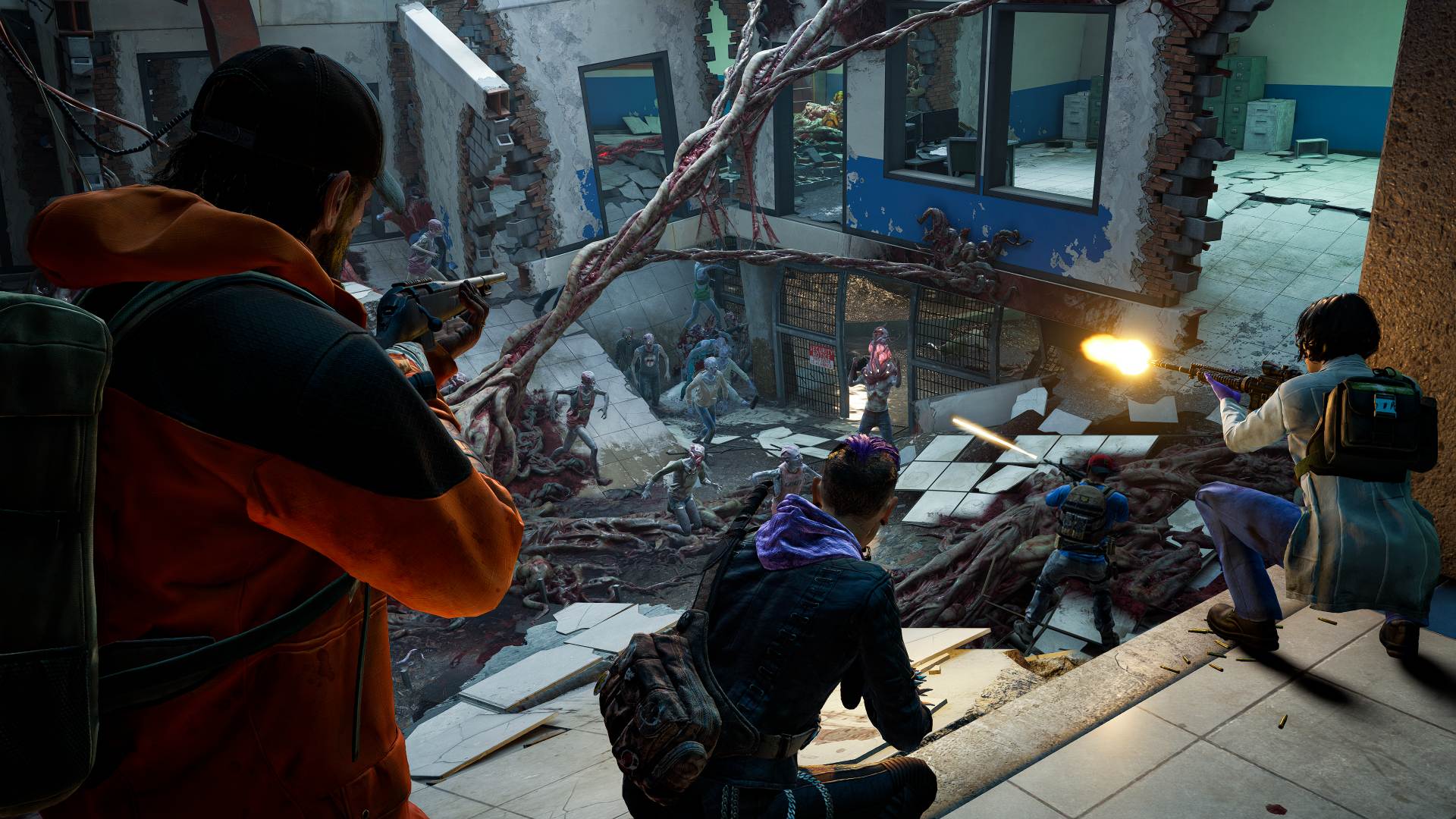 It’s a party if you’ve got enough people

Since the first Left 4 Dead launched in 2008, many games have tried to replicate its particular brand of co-op shooter. And with Back 4 Blood, Turtle Rock Studios is returning to that same zombie-killing formula, even harkening back to it with the new game’s name mirroring the old.

We’re still working our way through Back 4 Blood, but what I’ve seen so far points to a pretty engaging co-op shooter that’s hitting some real high notes—as long as you’re playing with friends.

Back 4 Blood is a first-person shooter where a team of four has to run through a level, scrounging and looting for better gear while facing off against the mounting threat of a zombie horde. It has Left 4 Dead blood running through its veins, from the smattering of survivors who bicker and quip to each other to safe rooms adorned with atmospheric wall-scrawling.

Its major differences come in a few places. First off, guns are much more varied in Back 4 Blood; every class of weapon, from shotgun to sidearm, has several different options, as well as attachment slots for side-grades you find along the way. Left 4 Dead felt like it encouraged players to perfect a small arsenal of guns, swapping to adapt to what the map asked for or just for personal preference. Here, guns feel a bit more of that personal choice, and it results in some hard choices when deciding whether to keep a decked-out basic gun or upgrade to a better base, discarding those attachments in the process.

Personal choice is bolstered by the card system, a mechanic that’s been gradually winning me over. Players can build a “deck” they bring with them into a campaign, which lets them draw cards and put them into play, enacting permanent benefits for their own character or even the whole team.

Cards start out extremely basic, with small tangible benefits like some extra health or faster reload speed. As you acquire more supply points from completing maps, you can spend them to upgrade the supply lines to your survivors’ hideout of Fort Hope, earning cards with better benefits to slot in. Soon I wasn’t just flipping on some added stamina, but the ability to gain temporary health for every shotgun pellet that hits the Ridden (the in-universe zombie name) or heal even more health with support items. 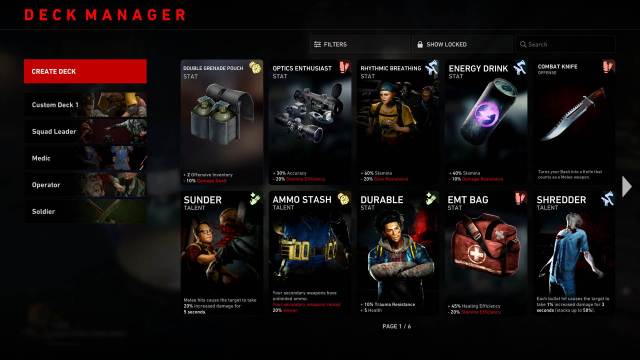 I’m still working my way into the full extent of these cards, but they’re where Back 4 Blood‘s feeling of playing a character really starts to work. Each Cleaner—playable character—also has their own perks and strengths, letting you define a build even more. When I play Doc, I can specialize into being the team healer; or when I’m Hoffman, I can focus on keeping the team stocked on ammo, so my friend playing Jim can be the damage-dealing sharpshooter who can pick off the special Ridden that show up.

Outside the regular zombie horde, there’s a surprising variety in the Ridden that attack the crew of Cleaners throughout each map. Some can wear on a bit, especially when it’s just massive groups of the bile-spewing exploders. But map-specific encounters like the massive Ogre and unique Ridden like the Hag add a lot of variety, and even the generic Ridden get variants, like armored SWAT zombies.

The maps themselves are a bit up and down. I’ve overall enjoyed the greater focus on objectives and team activities, like fortifying windows and carrying special objects to destinations, and the side objectives add extra challenge. Very rarely did it feel like my objective was as simple as getting from point A to point B. There also seems to be a pretty large number of maps to start. Each Act has several different linked missions that take you through individual areas, overall comprising pieces of a larger story within the “campaign.” The story hasn’t been a major draw so far, but the structure seems ripe for additional Acts or maps down the line.

One massive standout that will undoubtedly be everyone’s favorite map comes about halfway through the first Act. It’s the zombie movie equivalent of a bar fight, where the survivors have to hold out against Ridden swarming a bar with a jukebox blaring in the background. And yes, it’s an actual jukebox with real, licensed music. My first time through, it was a frenzied chaos that felt like a real movie montage, and I’m absolutely itching to go back and play it again, even just to see what other songs are in the rotation. 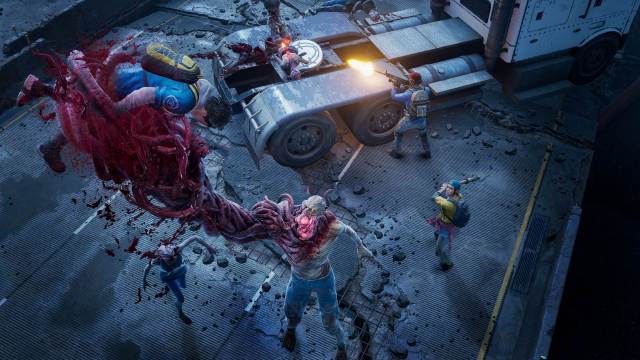 All of this is to say, I’ve had an absolute blast so far when I’m playing with friends. The solo experience, however, leaves a lot to be desired. When launching into a solo campaign, Back 4 Blood notifies you that you won’t be able to make any meta-progress while running by yourself. Though you get your pick of any cards you’d like, no supply points will be accrued, so you’ll need to play with others to pick up some new cards for multiplayer.

Back 4 Blood is certainly a game that caters to a full party, but to have that solo aspect feel so separate from the draws of the rest of the game makes it feel like an afterthought. Turtle Rock Studios has stated it’s going to look into ways to address solo progression, but until they’re implemented, that’s something folks who don’t have a four-stack lined up already should know. It seems fine for toying around with builds, but more of a “demo mode” than something you might play for a long time.

And really, you’d probably want to stick to human companions either way, because the A.I. in Back 4 Blood ranges from fine to unhelpful. While I’ve had a few decent bots, other times they rarely contribute or kill any Ridden, usually need you to bail it out of trouble, and aren’t very expedient about getting you back up after going into the down-but-not-out state. Even when the A.I. holds its own, the difference between a bot on your team and a person feels night and day.

This can also get frustrating as you start going up the difficulty levels, too. I honestly recommend starting with the Recruit difficulty; though it’s framed as the easier mode, it’s a good way to start out, get familiar with the levels and characters, and start racking up the cards you’ll need on higher difficulties. And again, you’ll want human players with their own capable decks to back you up, rather than the bot that keeps shooting me in the back. 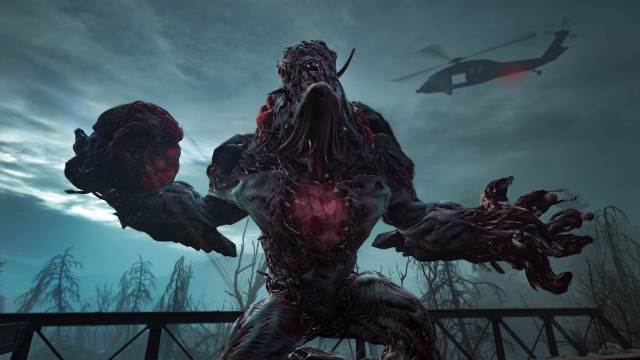 Single-player woes aside, this is a co-op shooter that’s reminding me why Left 4 Dead held such a solemn place in games for so long. One underrated aspect that Turtle Rock has nailed for me so far is pacing. It’s so crucial to have a well-maintained rise and fall to every area, without repeating the same beats over and over, and I feel like Back 4 Blood is nailing that so far. I’ve had my fair share of “everybody run” moments, where we’re all hurtling down a street towards a Safe Room door with the Ridden on our heels. The aforementioned bar blitz is several minutes of concentrated, all-out zombie-killing mayhem, and it is simply sublime.

There are plenty of moments to stop and breathe, too. There are times where we’ve had to sneak through areas, carefully picking off Ridden with well-placed headshots, or had to skulk through the fog fearful of what’s just outside our sightlines. The banter between Cleaners has been good, and like most good co-op games, Back 4 Blood has also been a handy vehicle for friends to gather and chat about whatever in a Discord call.

It’s just like going to a friend’s house to play some Left 4 Dead, and Back 4 Blood at least nails that aspect. We’re still putting together our full thoughts on it, but honestly, if you’ve got three friends and matching Game Pass subs, there’s really no reason to not give Back 4 Blood a try. It is a pretty solid social zombie-shooting game that will fill at least a few weekends this year.