“The Taxidermist” is the first in what will presumably be a series of a few additional short stories in the universe of Heavy Rain. At first glance, downloadable content for a game such as Heavy Rain seems problematic. Since the focus of the game is its ostensibly self-contained story, telling tales that exist outside the game’s narrative — yet within the Heavy Rain fiction — could conflict with the characters and plot established by the game itself.

That said, I was willing to play through “The Taxidermist” because I enjoyed Heavy Rain enough that I wanted to find out more about its characters (in this case, you play as journalist Madison Paige), and because I just wanted more of Heavy Rain’s adventure-game-like environment interaction.

[Editor’s note: This review contains spoilers for “The Taxidermist,” so don’t read it if you want to go in completely blind. -Samit] 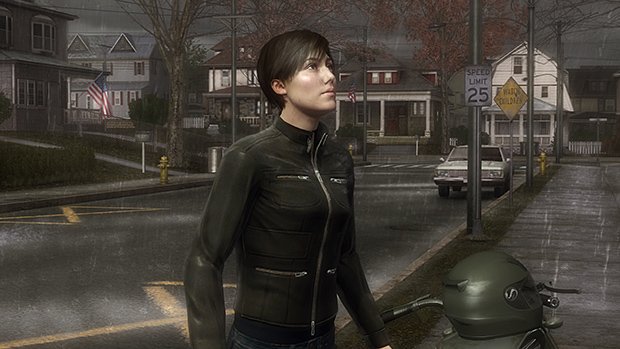 In “The Taxidermist,” you explore a Madison Paige side story that takes place in November 2009, about two years prior to the events of Heavy Rain. The episode does a great job of building Madison’s character; that is, it helps to legitimize her as a journalist, since it establishes that by the time she tracks down Ethan Mars at a motel, she has been working to uncover the identity of the Origami Killer for more than two years. Following this particular lead entails questioning the latest suspect, a 40-year-old former taxidermist named Leland White.

Madison parks her motorcycle in front of White’s home/office, which is located in a serene suburban neighborhood — some kids are playing in the front yard next door, even in the daytime downpour. You find that White isn’t home, so of course — intrepid reporter that you are — you break into his house to pursue a front-page scoop. White’s abode is suitably creepy, and that’s before you even factor in the numerous stuffed animals hanging on the walls or from the ceilings, and sitting around the living room. 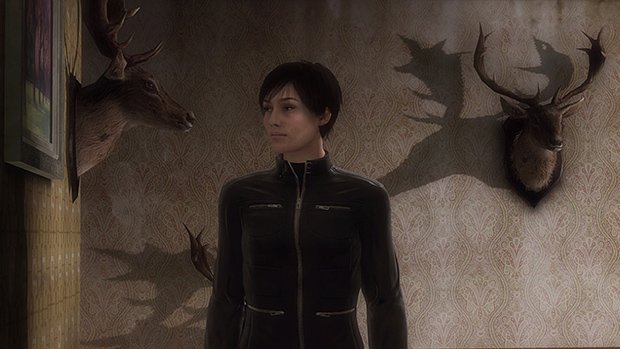 As you explore White’s house more deeply, you find unsettling clues here and there — things that hint at a more sinister side to the taxidermist. Since the entire chronicle consists of White’s home and its immediate surroundings, it feels as if Quantic Dream packed more interactivity per square inch, if you will, into this DLC — although it may just seem that way to me. While some of the objects you interact with and actions you perform may not actually do anything per se, most of the things you can do in “The Taxidermist” combine to provide a sense of foreboding that has a satisfying narrative payoff — once you head upstairs to the second floor, where most of the windows are obscured by newspapers.

Trying to go back downstairs after you discover White’s secret will trigger a cutscene in which he returns home, which is when Madison realizes that the creaky floorboards upstairs mean that she might never make it out of 411 Harbor Street alive (and when the real fun of “The Taxidermist” begins). Yes, it’s possible for Madison to die in “The Taxidermist,” which, of course, is kind of a big deal because it introduces a major hitch into the Heavy Rain canon: namely, how the hell does Madison exist in the main game if she’s been dead for two years?

It appears that for “The Taxidermist” as well as for Heavy Rain, Quantic Dream sacrificed a coherent plot in the name of an interesting one. Having said that, I’m almost willing to overlook the glaring Heavy Rain plot hole that Madison’s possible death creates, because nearly everything that can happen after White gets back is tremendously thrilling and immensely enjoyable. And your interactions (or lack thereof) with the objects in White’s house can affect the outcome, so it’s not as if the story only begins at that point. 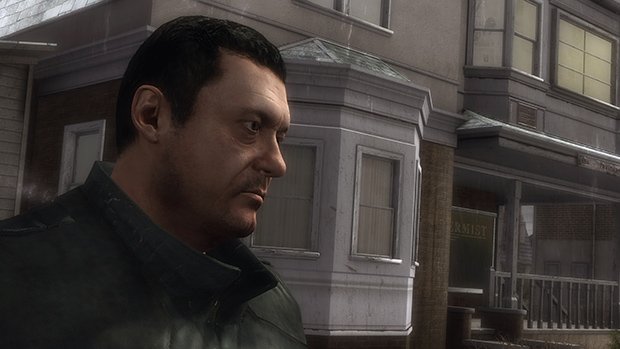 But ignoring the potential contradiction would force me to regard “The Taxidermist” as a story that isn’t a part of the Heavy Rain timeline, when it’s so clear that Quantic Dream wants players to consider it as such. Another curious facet of “The Taxidermist” — though one that I welcome — is its ending. When you complete the episode, the game presents you with one of five different newspaper headlines. The next screen lists all five endings, and it prompts you to load your save from outside the house, inside the house, or when White returns, so you can try to see all of the endings. (It only gives you the headlines, so you still have to figure out how to achieve those outcomes.)

I say this is curious because it exemplifies a completely opposite ethos from the one that David Cage and Quantic Dream have repeatedly espoused for Heavy Rain: that you should only play it once through. In the context of this downloadable content, though, it makes sense — my first play-through of “The Taxidermist” ran a mere 30 minutes, and I was taking my time. I don’t have a problem with Sony charging five dollars for the chronicle, but that’s only because discovering the other four endings provides enough playtime — and is entertaining enough — to justify the cost.

“The Taxidermist” also retains some of the annoying quirks of Heavy Rain. Madison’s voice acting isn’t spectacular, and White happens to share his voice with Scott Shelby, which is jarring. In addition, a possible death for Madison plays out with White stabbing her multiple times as she fails to start her bike. After killing her — in broad daylight, mind you — he slings her body over his shoulder and heads back toward his house, only to pause and laugh maniacally before he takes her inside. And you’d think that a journalist in 2009 — or a functioning adult, really — would keep a cell phone on her person. Like more than a few points in Heavy Rain, these moments test your suspension of disbelief. 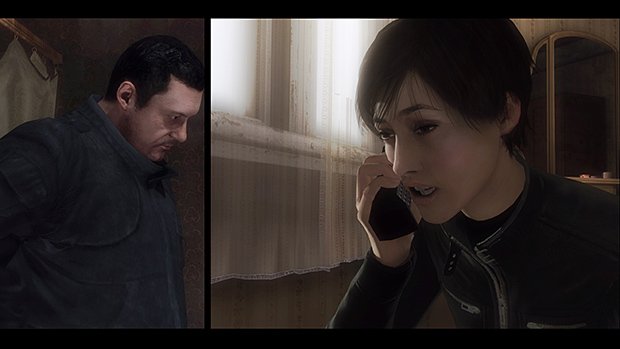 Narrative-wise, “The Taxidermist” has a few problems, and it can produce a big one. But it also represents the best of Heavy Rain: character motivations, visuals (most notably, some tension-inducing split-screen cinematography), and game mechanics coalesce to create a gripping sequence of events that quickens your pulse and leaves you panting. I felt much the same way about “The Taxidermist” as I did about Heavy Rain as a whole — the story doesn’t always make sense, but it’s worth playing anyway for the sheer excitement of it all. If the more mundane parts of Heavy Rain left you unenthused — and if they didn’t, that’s even better — you’ll enjoy this exhilarating condensed experience.