It used to cost ridiculous amounts of money to record video from other sources, especially in HD. But these past few years companies like Hauppague, Pinnacle, AVerMedia and others have released affordable boxes that let you capture footage directly to your computer for editing and saving. Taking the price down from thousands to hundreds for these boxes came right in time for the explosion of streaming and sharing video on the internet.

One of the most popular of these devices was Hauppague’s HD PVR video recorder, released about five or six years ago. For less than $200 users could capture 1080i video easily.

Now they’ve released an update with the HD PVR 2 Gaming Edition, which steps it up with HDMI connectivity, 1080p capture, and other handy features, perfect for grabbing game footage from consoles. We’ve given one a full test run over the past couple of weeks.

We’ve used Hauppauge’s HD PVR video recorder boxes here at Destructoid to capture game footage for the past couple of years. They worked fine for what they are — a reliable but inexpensive way to capture HD video to computer. While nothing fancy, the on-board video encoder and USB 2.0 connectivity made the job easy.

But we’ve been missing HDMI connectivity lately. And while suitable, the video quality was always a bit lacking when compared to higher-end equipment. The biggest issue with the HD PVR was that the component video passthrough feature had a delay, making the device unsuitable for capturing gameplay footage without looking like a terrible player. If you’ve seen us fail a lot in our game footage, blame this box. 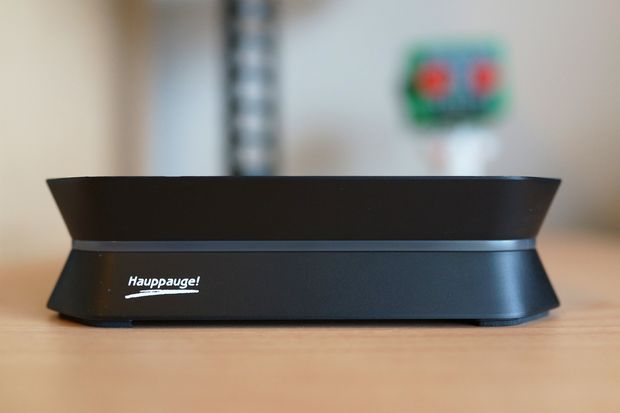 Hauppague’s newest, the HD PVR 2 Gaming Edition, solves all of the issues we had with its predecessor. For about $160 (street price) you get HDMI and component inputs, perfect HDMI passthrough, on-board encoding with decent video quality, and some high-quality cabling to boot. The HD PVR records at rates up to 1080p from HDMI sources directly to your computer via USB 2.0 without breaking a sweat.

But! HDCP copy protection rears its ugly head when recording video output from the PlayStation 3. Simply put, the HD PVR 2 cannot record HDMI 1080p video from HDCP-protected devices like the PS3 and some Blu-ray players. You’ll have to settle for component-connected video, which caps out at 1080i.

I’ll admit to not reading the manual, but I thought the box was broken at first, while trying to capture footage of Ni no Kuni gameplay a few weeks back. Scrambled or blank screens had me flustered. But trying out an Xbox 360 gave me a crisp, clear image on passthrough, and a really nice recording, even on default settings. And then I read the manual. 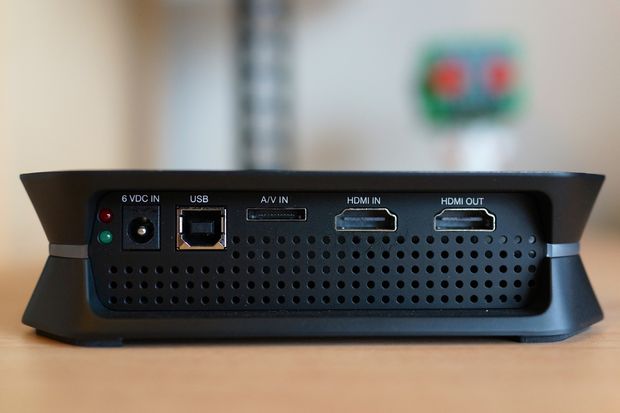 I wondered what that included high-quality PS3 component cable was for!

The rear of the unit features obvious ports for HDMI in and out, but the component (or other optional video cabling) connections connect through a very small proprietary port. An included breakout cable fans from this tiny and fiddly little connector to five female RCA cable ends for component connection. I get that they were trying to keep the device small and sharp looking, but I worry about how durable this port will be after several connections and unpluggings.

As mentioned above, they’ve tweaked the looks of this device. It’s small (smaller than a Wii), black, and sleek looking, with a big record button on its top and a glowing blue/green recording light on its edges. It’s predecessor felt hollow and looked cheap, so I appreciate the redesign. 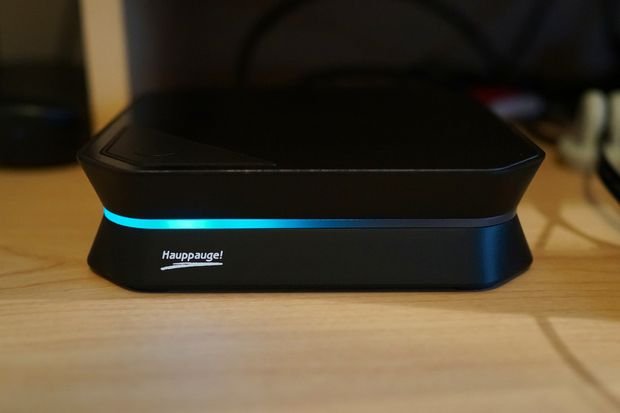 Hauppague includes a copy of ArcSoft Showbiz for Windows PCs for recording video. It does the job, though it’s a bit clunky in use, and slow to respond when changing video settings. Options are given to change video and audio inputs as well as video format and encoding settings. There’s nothing in the way of delay-free monitoring of incoming video in the software, but that’s the HDMI passthrough is for.

As Mac is not officially supported, you’ll have to buy recording software from a third party. I can easily recommend HDPVRCapture, as we used it for the previous model, and it never gave us any issues. A new version (pictured below) of this $29.95 download has been released for the HD PVR 2, and it works wonderfully, with full options to take advantage of all of the device’s features. A free demo is available on the product site. Hats off to this one-man show, headed up by a nice gent named Steven Toth. 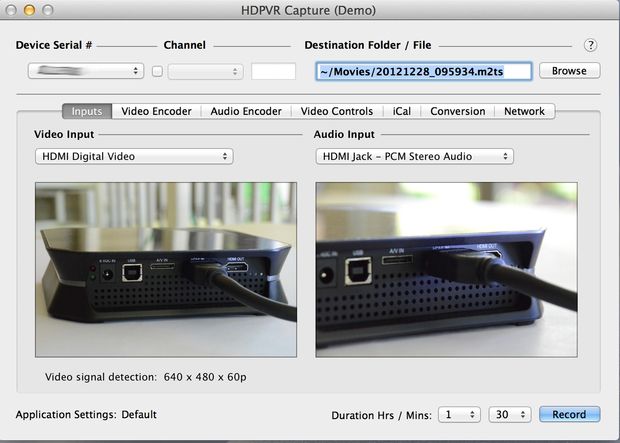 The HD PVR 2 does a fine job of capturing anything you throw at it. As mentioned above, Xbox 360 and PC content coming in via HDMI works beautifully, with what seems to be a totally transparent passthrough coming through to my television and monitors. Cranking the recording settings to a max bitrate of around 14 Mbps gave much nicer files than we ever saw with the previous model. Files are clean, with little hit to color. Of course, compression artifacts pop up now and then, but nothing serious. The framerate is capped at 30fps, which might bum out some videophiles, but probably makes no difference for video to be used on the web.

You can find several examples of game capture using the HD PVR 2 from both the Xbox 360 and PS3 in the video above. YouTube is a better choice as you can watch it in 1080p.

If you’re looking to capture game footage or any other type of video, the HD PVR 2 is worth considering. You’re getting a really solid H.264 capture solution for under $200, though you’ll have to go in knowing that PS3 capture (and system output) won’t be optimal. Its passthrough feature lets it become a fully integrated piece of your gaming setup, meaning that you won’t have to mess with unplugging and reconnecting each time you want to capture something.

In the end, the HD PVR 2 comes with all the cables you’ll need (two HDMI cables, one PS3 component cable, USB cable, and component breakout), is easy to use, and captures really nice video. Recommended.