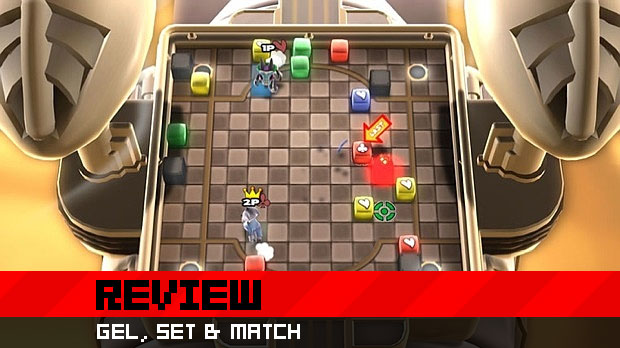 Over three billion years ago (Standard Internet Time), I was hopelessly addicted to Lumines. After burning out — it took a few weeks — I put down the genre for a good clip. I regret that decision.

Recently, I sunk my teeth into the Xbox LIVE Arcade title Gel, Set & Match. It’s a colorful 3D puzzle game that challenges players to match four like-colored blocks. The game takes the next step at this point, because, well, you can continue to use that initial match to create more. Zany, right?

Again, I regret that whole “not playing puzzle games” thing.

Anyway, hit the break to see how Gel, Set & Match measures up.

I wish I had a great puzzle-genre related anecdotal story to relate. The ideas and freeze frames scurrying through my brain aren’t thought-provoking, nor can they be associated with Gel, Set & Match in any reasonable fashion. (Example: I puked on my Game Boy once while playing Tetris; thanks, chicken pox.) Instead, I’ll just say that I’ve enjoyed my time with the game and get on with the explanation of it.

And here we are. Gel, Set & Match is a twisted mixture of Bomberman and Lumines. The goal of the game is to match four like-colored blocks by pushing or throwing them with some sort of 3D elephant-aardvark, uh, avatar. Most puzzle games tend to stop there, but this one goes a step further. Once you complete a match, you’re free to take one of the matched blocks (they playfully explode, but there’s a short timer that allows further interaction) and slide it to another like color.

Obstacles will complicate things. In Puzzle Mode — the game’s equivalent to a campaign — cages, steel blockades, and unmovable (but colored) blocks will force you to plan ahead and carefully execute throws and pushes.

The variety, of course, makes the game more intriguing and presents a decent change of pace between the relatively flat matching levels.

The Puzzle Mode is lengthy and has a few interesting twists. Each level under the twenty “card” hood has a par — a certain limit of pushes and throws required to get the best ranking. If par is achieved in every level, a bonus level is unlocked which can give you additional stars (the game’s currency, which you can use to outfit your elephant-aardvark in a variety of goofy costumes).

There are also two other modes, Action Mode and Battle Mode.

Action Mode is where Gel, Set & Match grabbed me. The objective is to escort a tank across a plane chock full of obstacles. Your job is to clear these obstacles to avoid injury to the vehicle. It’s relatively fast-paced and requires a decent understanding of the game’s post-match mechanic. It’s fun and a nice change of pace from the sluggish Puzzle mode.

Battle Mode is where the competitive affairs are housed. Each one offers something unique — a race to earn more points, match a designated color before the others, or trash other players with combustibles for points — but it feels a bit out of character, and the lack of a robust Xbox LIVE community certainly isn’t any help either.

I should mention that all three of game’s modes are playable via Xbox LIVE. Puzzle Mode and Action Mode are cooperative experiences, while the Battle Mode is strictly competitive. Puzzle Mode is neither aided nor hurt by the cooperative, but Arcade is an absolute blast with a friend.

I don’t tingle with excitement while I play, nor do I find the puzzle mechanic insanely addictive, but Gel, Set & Match is a solid game. I enjoy laying back and playing Puzzle Mode — I’ve made it to my 17th “card” — but it isn’t without its wrinkles. Interspersed throughout the cards is the manically frustrating level. It’s odd being hopelessly trapped within one level, but it’s even more curious when you finally finish it and are able to blast through the next eight or nine without pause.

But there’s always Action Mode, which also has its own sets of “cards” and variety of levels — including one that allows it to go infinitely. Very cool stuff.

My take is this: if you’ve been thirsting for a puzzle title on Xbox LIVE Arcade, you really can’t go wrong with this playful creation. There is a ton of play time, along with local and Xbox LIVE multiplayer support, as well as the promise of downloadable content. Sometimes the difficulty of Puzzle Mode will get you down, but it’s a sidebar to what the game has to offer as a whole. Spend those points.