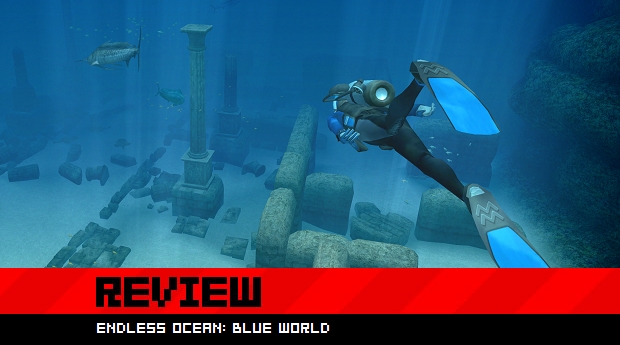 My name is Chad. And I love dolphins.

Because of this love — nay, obsession — our illustrious Mr. Sterling was generous enough to allow me to take a shot at reviewing Endless Ocean: Blue World for the Wii, the ocean-exploring, marine life-interacting sequel to the original Endless Ocean that came out two years ago (which I was also lucky enough to review).

While I definitely enjoyed Endless Ocean, two things really bothered me (enough to award the game a just-above-average 5.5). First off, I felt the ocean in the game felt far from “endless” and, secondly, the game’s overall presentation left little to be desired. For a game that promised a majestic, undersea world to explore and interact with, everything felt surprisingly restrictive.

So, where does that leave Endless Ocean: Blue World? Does this Wii sequel improve on the original, or does it suffer from the same problems? Hit the jump for the full review.

Oh, wait, dive into the jump for the full review. DIVE INTO THE JUMP! Man, that would have sounded so much cooler! 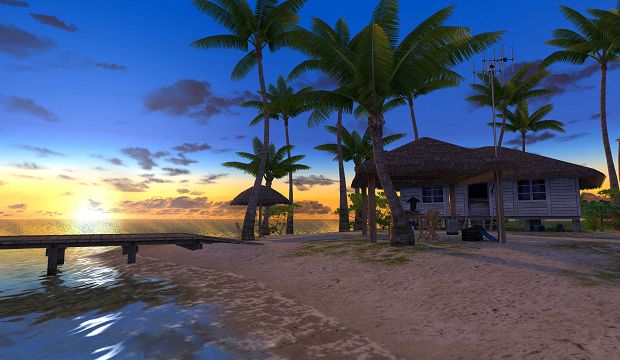 Let’s get this out of the way right now: Endless Ocean: Blue World has the most adorable loading icon in the history of videogames. While other games settle for a spinning talisman or a fancy trail of swirling smoke, Endless Ocean: Blue World presents its player with a parade of baby penguins that waddle and slide on their bellies on the bottom of the screen every time the game loads or saves.

You might think, what does this have to do with the game? Is it really so important to lead off the review with something so seemingly minor? The reason I chose to focus on this — other than the fact that it never hurts to mention baby penguins — is the loading icon perfectly describes the entire experience of playing Endless Ocean: Blue World.

The game is harmless, pleasant, relaxing, and just makes you feel really good inside. And compared to the first game, that is a marked improvement. 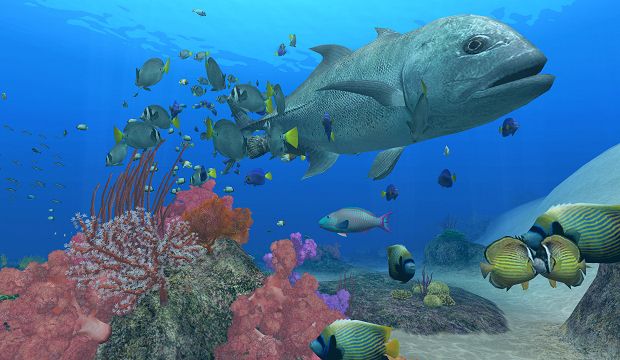 Everything seems to fall into place in this sequel. While not much as changed from the original, what Endless Ocean: Blue World does expand on makes the overall game feel much more complete and fluid. It’s like developer Arika finally achieved what they set out to do with the original Endless Ocean: mainly to create a game that sucks you into its beautiful blue abyss and lets its calming energy guide you through hours of open-ended, completely laid back gameplay.

As with the first game, Endless Ocean: Blue World starts by allowing you to name and customize your main character — a free-lance diver/college student that joins up with a local diving service. Once your character has been created, the game quickly starts and the undersea exploring begins!

Unlike the first game, however, Endless Ocean: Blue World has a much more involved story this time around. Well, I say “involved,” but there really isn’t that much to it. Basically, you team up with a young female diver named Oceana to search for a lost sunken castle that may or may not have a connection to Oceana’s father’s mysterious disappearance.

While the story is passable (and actually somewhat interesting at times), Endless Ocean: Blue World is not about weaving a complex tale. The story is just an excuse to tie the many hours of ocean exploring together. 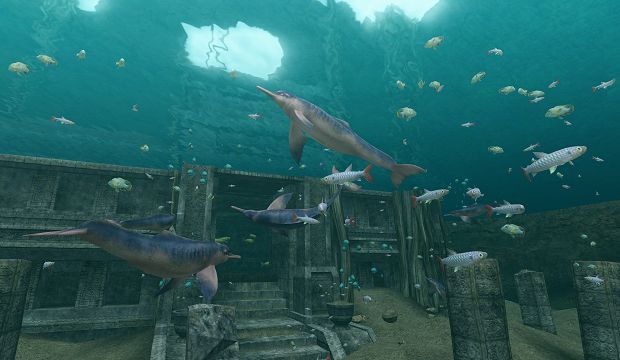 And I type with this with a big, satisfied smile on my face: The oceans in Endless Ocean: Blue World feel much more “endless” this time around. Yes! Not only are there more bodies of water to explore (from vast oceans to tropical rivers to arctic seas), each underwater section is enormous and filled with many hidden caves and crevices to discover.

While it may sound like a negative to say that Endless Ocean: Blue World — like its predecessor — amounts to nothing more than map-making and interacting with wildlife, it is really meant to be its biggest compliment. I am a sucker for exploring in any videogame, and Endless Ocean: Blue World doesn’t just encourage it, it rewards you for doing as much of it as possible!

When you are not seeking out clues to help progress the story, your diver can pretty much go anywhere and do anything with no real restrictions (other than a limited air supply, but that never really becomes a problem). And there is so much to do in the game it is almost overwhelming to manage at first.

In addition to swimming around effortlessly with the Wiimote (simply point to where you want to go and hold down the B-trigger), your diver can study hundreds of fish, feed all the wildlife he/she comes upon, heal injured animals with a scary-looking pulse gun, ride on the backs of whales, find hidden treasures, log new areas on elaborate maps, use sonar to discover hidden secrets, take pictures and create a photo album, train dolphins at a privately-owned island, purchase new diving gear, and really so much more! Whew!

There is a lot to do in Endless Ocean: Blue World, and, sure, while some of the tasks are more fun than others, what’s great about the game is nothing is required! If you want to interact with and read about fish for hours you can! If you want to explore the depths of the vast oceans for hidden coins and treasures, you can do that, too! Want to train your pet dolphin and teach it new tricks? Go ahead! Outside of the main story quests, everything is optional. 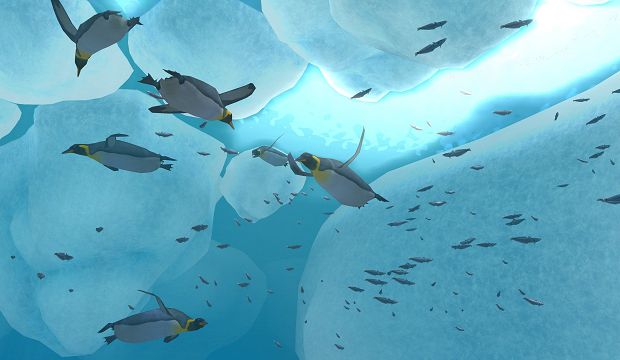 While I could go into great detail concerning every single thing I loved about Endless Ocean: Blue World, I won’t bore you with an intimidating wall of text. Instead, I offer you some bullet points about some of the stellar aspects of the game that I found most appealing:

–The music! Like the original, the music is Endless Ocean: Blue World is fantastic — maybe the best on the Wii! Not only is it fully orchestrated, but the main theme — an Enya-inspired piece of magic — is so beautiful and soothing, that it will lull you into a hypnotic, calming state just by listening to it for only a few minutes. I am starting to fade away just thinking about it …

–Achievements! Well, they are called “titles” in Endless Ocean: Blue World, but they basically amount to what Xbox 360 users would classify as achievements. On Nineball Island — a hub of sorts that lets you purchase new gear, speak to your crew, and check on new missions — there is a chart that tracks the many different titles you can receive in the game. Each title is tied to a specific accomplishment, be it something simple like studying a certain kind of fish, to more complicated things like finding twenty hidden Zodiac coins. Achieving these titles is always fun and very satisfying. And even better, after earning certain titles you are rewarded with some great gifts, such as money to spend on upgrades or decorations for your island.

–Education! I am not one to wax poetic about educational retro games Donkey Kong Jr. Math and Mavis Beacon Teaches Typing, but after playing Endless Ocean: Blue World it made me appreciate those games a lot more. Blue World is infinitely more entertaining than those two games, but all three have such a heavy focus on educating the player with important information that they have to, at the very least, be admired. After hours of playing Endless Ocean: Blue World, I genuinely learned a lot about each of the fish I interacted with. And, surprisingly, I was never bored once. I can only imagine being a parent, and realizing how satisfying it would be to sit your child in front of this game, knowing they are honestly going to learn something every time they play. That’s a pretty cool bonus, if you ask me. 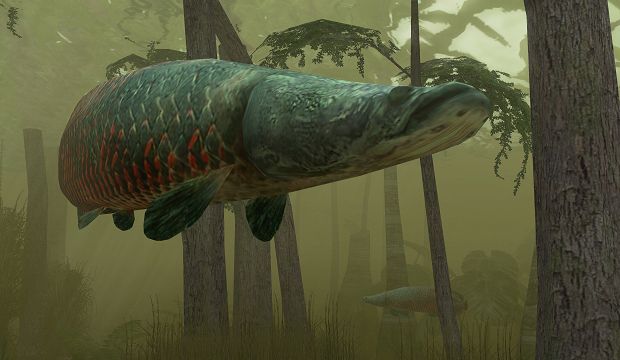 And this doesn’t even begin to touch on some of the other new features that made their way into Endless Ocean: Blue World:

For the first time in the series, you can swim with a diving partner online, and even use Wii Speak to communicate with each other. While Xbox 360 and PlayStation 3 owners will scoff at this primitive technology, it is still an improvement and actually pretty fun, especially when diving with a good friend.

This time around, certain creatures (such as sharks!) will actually attack you, forcing you to defend yourself with a quick gesture of the motion control coupled with your handy pulse gun that can calm agitated animals. You can’t really die in the game, but each hit from an unruly undersea creature knocks a significant amount of air out of your tank. Once the air is gone, your mission is over and you are automatically sent back to your boat.

And the list goes on and on. While there are many new things to do, the classic gameplay of exploring and interacting stays intact, feeling much more polished in Blue World. The details present in the undersea worlds alone are staggering. Each marine creature seems to exist in a completely realistic world, swimming around and interacting with everything just like they would in real-life. I am not a biology expert, but the world established in Endless Ocean: Blue World felt very believable to me. And this attention to detail only helps add to the game’s overall engrossing, wholly unique experience.

With all these positives, though, there are, unfortunately, a couple key negatives.

First off — and most obviously — are the graphics. While they are admittedly gorgeous at times (looking up at the sun-drenched, rippling water above your diver never gets old), it’s hard not to imagine how jaw-dropping everything would look in high-definition. This is not a knock on the Wii (I love my Wii!), but it’s hard to ignore the average visuals in a game where realistic, detailed environmental graphics are part of the main experience.

Also, like the first game, the controls can sometimes be tough to manage. Swimming around is easy enough, but making sharp turns and aiming with the Wiimote is much more cumbersome than you would expect. The good news, the control is never enough of a problem to ruin the game, but its occasional awkwardness is definitely worth mentioning. 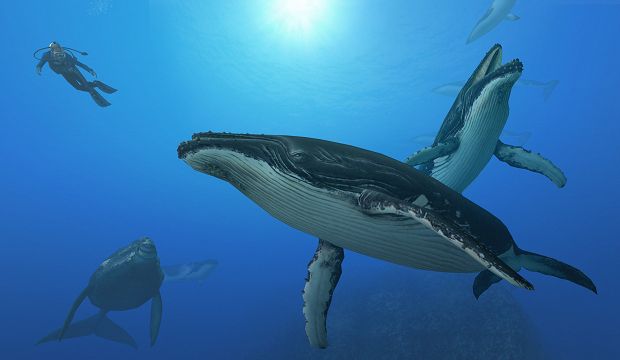 All in all, Endless Ocean: Blue World is a large improvement on the original game and a really wonderful experience. The new features are all winners, the surprisingly solid story is interesting, and the overall presentation feels much more polished this time around. Exploring the game’s stunning undersea world is, at the same time, both exhilarating and educational.

As a self-proclaimed non-game, Endless Ocean: Blue World is a charming diversion and comes recommended to anyone looking for something unlike anything else out there.