Gamers have been begging for a sequel to Crackdown for years. The original game, developed by Realtime Worlds, became a cult hit due to its surprising and empowering gameplay, not to mention the fact that it came packed with a beta code for Halo 3. Whether it was the former or the latter that led to Crackdown‘s success is up for debate, but whatever the reason, people loved Crackdown and the announcement of the sequel was cause for celebration.

Now, after an eternity of waiting, we have Crackdown 2. Now developed by Ruffian Games, this game aims to reproduce the exact same experience as its predecessor, only with more of everything. However, has it “ain’t broke, don’t fix” approach been a boon or a curse? Just how far can a game provide “more of the same” before it feels like an unnecessary title? What’s the difference between a similar experience and a straight up carbon copy?

Crackdown 2, to its discredit, answers all these questions, while leaving one completely unanswered — exactly what has Ruffian been doing with itself for the past twelve months? 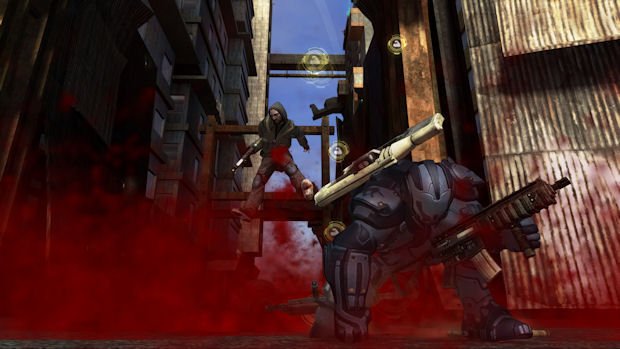 Crackdown 2 is incredible fun, providing all the thrills, spills and chills of the original Crackdown. It looks gorgeous, it feels empowering, and the collection of Agility Orbs is as addictive as ever. All of this is true… for about ten minutes. After playing the game for several hours (you can beat it in a handful), however, Crackdown 2 essentially is the original Crackdown, only with bad pacing, increased repetition, and far less content overall.

The game takes place in Pacific City — the exact same city as the last game — which has fallen apart since The Agency cleared out the gangs and took control. A new terrorist organization called The Cell has risen to destroy The Agency, while a breed of mutated zombie-like citizens called The Freaks rise from the ground every night to terrorize the people of Pacific City. Obviously, the Agency has to deal with these problems, and as a newly created Agent, the job falls on your shoulders.

Crackdown 2 puts players in the middle of a three-way war between the Agency’s Peacekeepers, the Cell’s soldiers, and the Freaks. During the day, players will have to tackle Cell operatives, taking over tactical locations by clearing out a stronghold until Agency air support can arrive. By night, players deal with Freaks, closing up their escape holes by, again, killing everything until Agency helicopters arrive to close block their escape routes. These objectives are optional and only serve to support the game’s one main mission thread — activating “Absorption Units” dotted around the city. 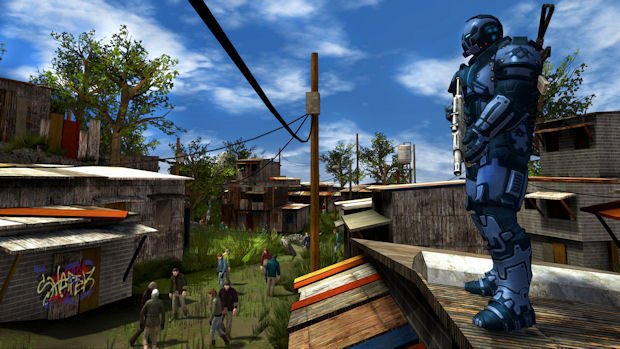 Absorption Units are part of the Agency’s “Project Sunbeam” scheme, which involves sending light beacons underground to destroy the UV-sensitive Freaks. Players have to activate three Absorption Units, then travel to the designated underground location where they have to fight waves and waves of Freaks until the beacon is fully charges.

That, in a nutshell, explains everything that the player has to do in order to reach the end credits. Whereas Crackdown at least had an illusion of progress and variety with the different gangs and key assassination targets, Crackdown 2‘s mission structure does away with pretense and just makes players perform the exact same tasks over and over again.

Clearing tactical locations, closing Freak holes, and lighting beacons represent the entire action section of the game, and even though they sound different, they are basically all exactly the same — kill everything in a certain location in order to win. From the very start of the game to the very end, this never changes. You won’t even have any idea how much of the game you’ve completed without looking at your stats, due to the fact that the game is so repetitive, bland and pointless, any sense of progression just doesn’t exist. 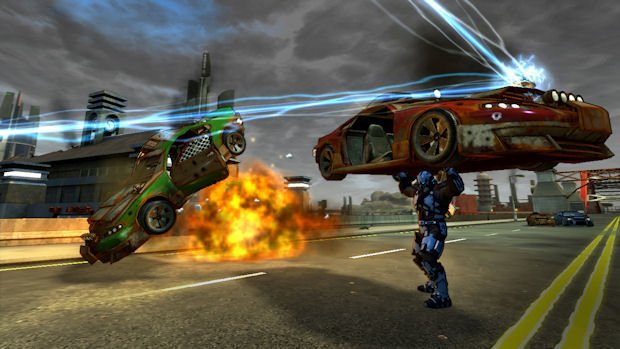 Of course, there are Agility Orbs, Hidden Orbs and Driving Orbs dotted around Pacific City to collect, and stats to increase, but we had those in Crackdown and absolutely nothing has changed. If you are one of the insane people who caught all 500 Agility Orbs in Crackdown, then guess what — you get to do it all over again! Ruffian has attempted to shake things up with “Renegade” Orbs, although a better name could be “Asshole” Orbs. These are essentially Orbs that run away from you, and require a lot of patience and dexterity to capture. It’s a cool idea, but it’s one of only a handful of original ones in this entire game.

As always, teaming up with friends is a crucial element of the Crackdown experience, and they will be essential if the game is to remain enjoyable. For one thing, many areas are so overrun with enemies — many of which pack rocket or grenade launchers that rapid-fire and home in on you — that you’ll need the backup of at least one other Agent before expecting to get out of a fight unscathed. The game is totally balanced towards co-op and single players will likely have an even worse time than those playing online. For example, one area saw me dying three times before I could beat it. I replayed the same area with two other Agents and it was almost insultingly easy. 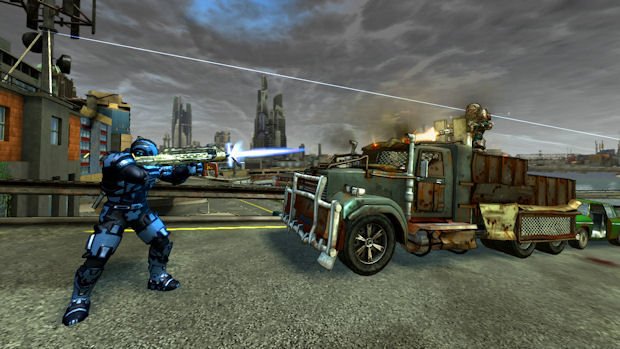 Aside from a few token new vehicles and weapons, Crackdown 2 is, by all counts, an expansion pack. It feels like a cliche criticism, and people who often invoke the “expansion” word are wrong, but this game is one of those that definitely qualifies. It’s the exact same game, albeit more boring, more repetitive and more frustrating. The redesigned Pacific City, which has taken away the great aesthetic of the first game and replaced it with a look and feel that seems to simply be copying inFAMOUS‘ Empire City, feels more drab, dull and barren. That was partially what Ruffian was going for, but it only works to the game’s detriment, providing a sterile and brown post-apocalyptic look that can be found in dozens of games.

So basically, Crackdown 2 is a stolen game in a stolen setting.

What’s worse, Crackdown 2 has done such a “great” job of importing the original game that it hasn’t fixed a single problem. Sequels usually address and fix known issues, but each irritating flaw of the original Crackdown has been lovingly reproduced in this one. Climbing is still frustrating due to the Agent’s random inability to grasp certain surfaces. There are still loads of ledges jutting out from buildings above climbable areas that require players to jump away from a building and then try to “swim” back to a higher ledge, or else otherwise repeatedly bash their head. It’s still impossible to tell what can be climbed and what can’t, and it’s still far too easy to fall from buildings due to the Agent’s slippery controls.

If anything, the climbing issues are worse in Crackdown 2, thanks to the aesthetic redesigns of Ruffian (redesigns meaning they just made everything look worse). Buildings seem even harder to climb, and it’s even easier to fall through cracks and holes. 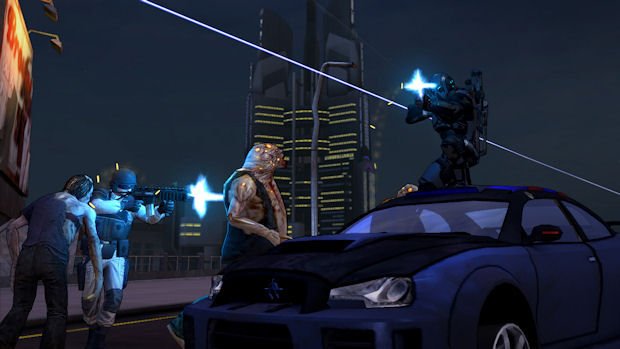 The targeting system is also completely broken, with the Agent locking onto cars and other non-threatening objects, often multiple times, rather than focus on the Cell operative a foot away from him that’s filling his balls with bullets. Some of the missions are broken, too. One tactical location is actually impossible to complete in single-player, because leaving the location’s radius causes the mission to be lost. Unfortunately, all the Cell soldiers that need killing at at the top of a building that requires players to leave the radius in order to climb. Without a second player, this mission simply cannot be completed. It’s oversights like that are simply inexcusable in a game where the developer did very little of their own original work.

That’s the real crux of the problem with Crackdown 2. With Ruffian Games needing to do very little of its own original development, there is absolutely no excuse for known issues going unfixed, and brand new problems being completely ignored. We’re brought back to our original unanswered question — what the Hell has Ruffian been doing with itself? It used the assets, engine, and gameplay of the original title, giving itself much more time to work on better missions, more varied tasks, and technical fixes. But none of that is present in this sloppy piece of work. At its best, Crackdown 2 is uninspired. At its worst, Crackdown 2 is straight up lazy.

The one thing Ruffian can claim as its own is the PVP competitive multiplayer arenas. Basically, it’s Crackdown with players shooting each other, and in all fairness, it’s not that bad. It lacks staying power, however, and while my time with it was admittedly limited, what I did play got a bit dreary after a while. With three modes to choose from — Rocket Tag, Deathmatch and Team Deathmatch — some players may find plenty to get into, but the announcer’s limited stock of phrases and the fact that battles feel rather lifeless, do little to keep the multiplayer aspect something many would want to keep returning to. If anything, all Crackdown 2 should have been was this mode added to the original game as DLC. It’s simply not worth buying the full game for this addition. 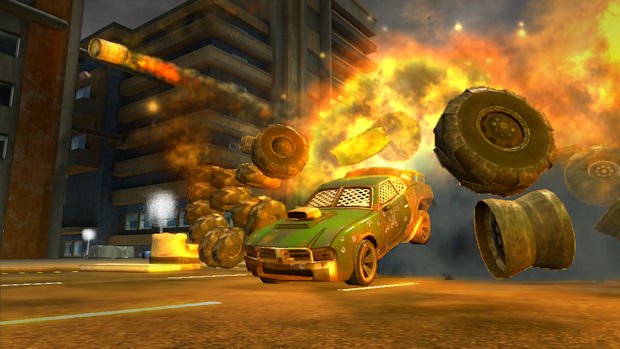 Ultimately, this game is a very sub-par offering that has no real reason to exist. Everything that is good about Crackdown 2 is already in the original Crackdown, and many of the problems in Crackdown 2 are unique entirely to this installment. In essence, all Crackdown 2 does is take the original game and make it worse. More issues, a duller Pacific City, and mundane gameplay all mount to create one of the most pointless, unnecessary, and insulting “sequels” ever created. Without the wow factor of the original Crackdown, the charm of Crackdown 2 wears off within minutes.