With Criterion Games constantly providing such a steady stream of add-ons, Burnout Paradise seems to have more in common with a platform than an actual videogame.

The core experience has evolved time and time again, and the game has yet to stop feeling fresh, but fans like myself have been eagerly awaiting the release of the definitive downloadable content, “Big Surf Island,” as if it has some magical healing ability.

Does it live up to the hype? Did it cause me to spontaneously become giddy like a schoolgirl? You’ll have to read the full review after the break to find out.

After finding all of the Smashes, Billboards, and Super Jumps in Burnout Paradise, I thought I was done. A few weeks later, I discovered the online Freeburn Challenges, and was sucked right back in. Many hours of gameplay later, I had gotten the ridiculous Achievement for completing 250 of the damn things, and then I truly became burned out (pun so intended) on the game.

That was, of course, until “Big Surf Island” came out. If there was one thing that the disc-based content for Burnout Paradise lacked, it was more over-the-top locations full of insane ramps and obstacles for players to mess around on. There was the Airfield, and the Quarry; that was honestly it.

Those two spots are easily the more popular locations for the exact reasons I described, but that’s going to change now that the construction on the bridge to Big Surf Island is complete. Why? Because this add-on is like combining Paradise City’s airfield with its quarry, and then multiplying that fusion by ten. It’s nothing but crazy jumps in a super tight, visually-appealing package. 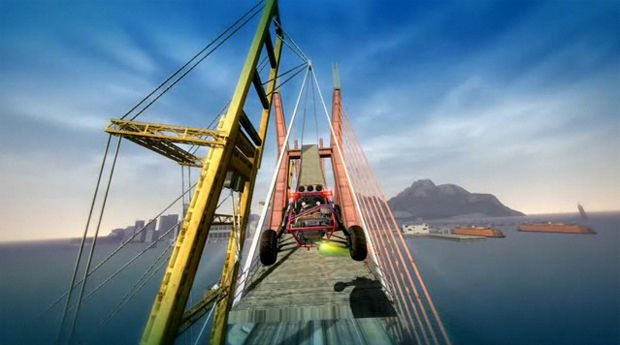 Players who often find themselves worried about cost per hour of entertainment when it comes to videogames should note that this DLC will take five hours to complete. It shouldn’t need to be said, but I’ll say it anyway: “Big Surf Island,” much like Burnout Paradise as a whole, isn’t simply about getting all of the objectives finished. So, in that regard, you are really paying for a new locale that has replayability far beyond the five or so hours of guided gameplay.

This add-on includes 15 Mega Jumps, 45 Billboards, 75 Smashes, 12 roads to rule, 10 Freeburn Challenges, and 15 Events. Like I said, unless there is one last gate that you cannot freaking find, you should have no trouble getting 100% completion of the island. Thankfully, these collectibles are much more manageable than ones found on the Burnout Paradise disc, due in part to their more vibrant color scheme.

There is one new Event type, Island Tours, in which you race across Big Surf to hit various checkpoints in a certain amount of time. Nothing mind-blowing, I’ll admit, but Criterion did a terrific job of putting some of the checkpoints in extremely weird and awesome places, which helps to differentiate the Event type from the more traditional racing. 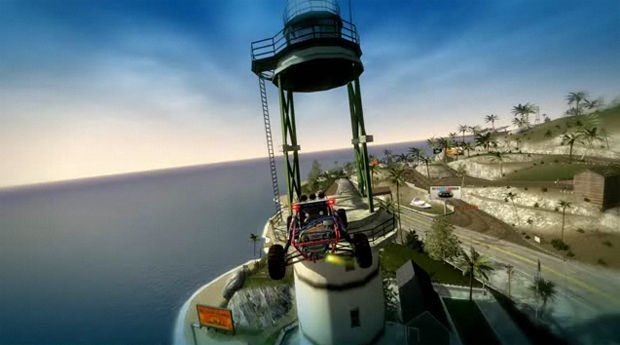 The other Events are just more of the same (Marked Man, Road Rage, etc.), but because they take place in a location as aesthetically pleasing as Big Surf Island is, they don’t feel boring or rehashed in the least bit. As for the Freeburn Challenges, I wish there were more available; this is probably my only complaint with the DLC. But at the same time, I understand it’s all about quality over quantity.

The most memorable one involves up to eight players jumping off of the Crash TV Ski Jump, the single largest ramp in the game, simultaneously. The catch is that everyone must be in the air at the same time, and having to navigate back up to the jump is a huge pain in the ass. Let’s just say my first attempt at beating this Challenge with seven other random Xbox LIVE players did not go so well.

Beyond the incredible scenery, “Big Surf Island” brings another great thing to the table: a sweet line-up of vehicles. How I’ve managed to get this far into a review about a racing game without mentioning a single vehicle, I don’t know, but that’s not to say the new cars are bad. In fact, the Carson Dust Storm, a dune buggy, has replaced the Jansen 88 Special as my favorite Burnout Paradise vehicle. It’s somewhat fragile, especially when going head-to-head with other cars, but it offers extremely satisfying control, and is small enough to zip around Big Surf Island’s narrower areas.

As a part of the DLC, there’s also eight additional cars to unlock. One is a second dune buggy, another is more or less a Hummer, and then there’s a hot rod. But, surprisingly enough, there are “toy” versions of the Legendary Cars. Yep, you get adorable, tiny versions of the Ecto-1, the DeLorean, and more. Considering their full-size counterparts are paid DLC, this offering makes “Big Surf Island” feel even more worth the $12.50 (or $12.99 on PS3, for whatever reason). 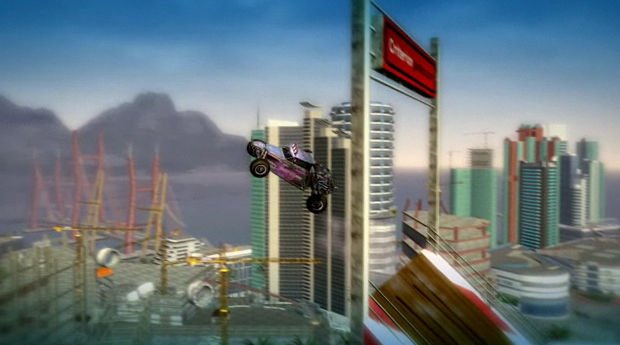 For once, gamers are getting DLC that actually “expands the experience.” Burnout Paradise was and continues to be a fantastic game, but this new content adds the one thing it was really missing. If you are only able to get one premium downloadable pack, you’d be a fool not to make it “Big Surf Island.”

Whether you’ve done all there is to do in Paradise City, or you just recently purchased Burnout Paradise, “Big Surf Island” shouldn’t be passed up. And, for the record, this thing totally did make me break out into my “giddy like a schoolgirl” routine.