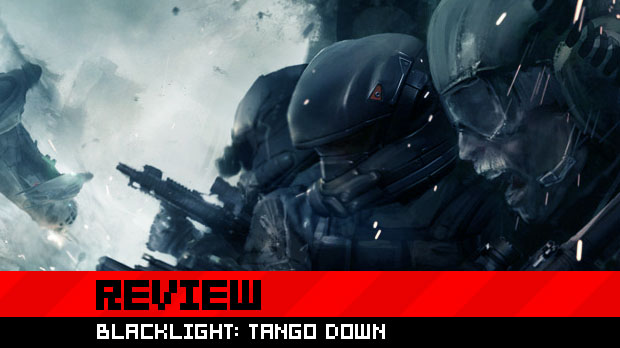 Blacklight: Tango Down is notable for attempting to provide a full retail experience on the humble digital market. With impressive visuals, a full-fledged online mode, and all the trappings you’d come to expect from a AAA blockbuster title, this $15 title aims to not only provide more content than your average console download, but to give consumers a level of quality you’d expect from a $60 game.

Unfortunately for Blacklight: Tango Down, they don’t give awards out for having noble intentions. Read on for the review! 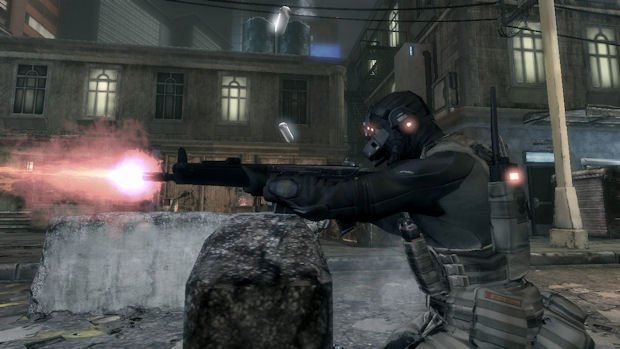 You know how some good single-player first-person-shooters have really rushed and poorly designed multiplayer modes shoehorned in, just to fill some imaginary quota that dictates all games need to have multiplayer, even if it’s bad? Welcome to the world of Blacklight, a game based entirely on that premise. With no tangible story, no explanation for anything, and no semblance of coherence, Tango Down is the bad multiplayer aspect of a good single player game, only without the single player part.

There is a mode possibly resembling a campaign, but to call it that is being generous. Designed for four-player co-op and not balanced for solo players in the least, the “Black Ops” portion of the game involves players taking on the AI in glorified multiplayer matches. With no adequate checkpoints, enemies that ambush you, and the player character’s ability to take only a handful of bullets before dying, it’s not long before one realizes that this “campaign” is nothing more than a collection of time wasting exercises.

The Black Ops levels seem thrown in for no good reason and I gave up on them since co-op only works with invited friends and I don’t know people stupid enough to be playing Blacklight without a good excuse. Frankly, these levels are just for show anyway, since multiplayer is where it’s at.

Unfortunately, multiplayer is only marginally better. With characters that feel like they’re gliding instead of walking along the floor, a health bar that appears to be there just for show, and a set of maps seemingly designed entirely around the idea of spawn camping, Blacklight: Tango Down is pretty damn miserable at providing a decent online experience. 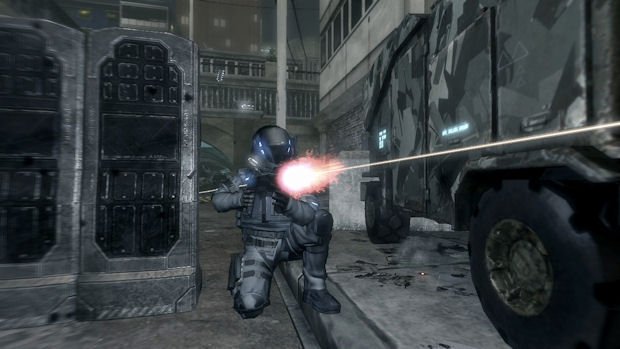 Imagine a parody of Call of Duty, where spawn camping isn’t just the best way to win, it’s the only way to win. A game where victory is about luck and not skill, because players are dead after absorbing about three bullets and have no way to really fight each other because everyone’s apparently made of paper. Blacklight takes these frustrating problems to amazing new extremes, almost managing to impress in how terrible it’s made them. Players have 175 hit points and I literally don’t know why they’re there, because the health bar has no use. If you’re seen by an enemy, you’re dead. You have no option to escape, because the time between getting spotted and hitting the ground is less than a second. You could argue that it’s “realistic” but I argue that it’s “shit.”

It doesn’t help that the maps are absolutely dreadful, mostly designed to reward spawn campers and snipers and screw over anybody else. It’s not uncommon for one lucky team to “lay siege” to another team’s spawn area, sniping or ambushing any player unfortunate enough to leave the safe zone, which isn’t even all that safe since players can lob grenades over the wall or snipe from higher ground.

To its credit, Blacklight features a robust customization feature which is expanded as players rank up throughout their multiplayer careers. Armor, equipment, and various weapons can all be customized. There are also some unique little toys, like the Digigrenade which causes a huge ball of pixelation to appear and disorient enemies. Unfortunately, however, the different weapons on display are all moot due to the aforementioned wafer-thin flesh of the brittle player characters. It doesn’t matter how powerful your weapon is when enemies die in one second flat with even the weakest guns. 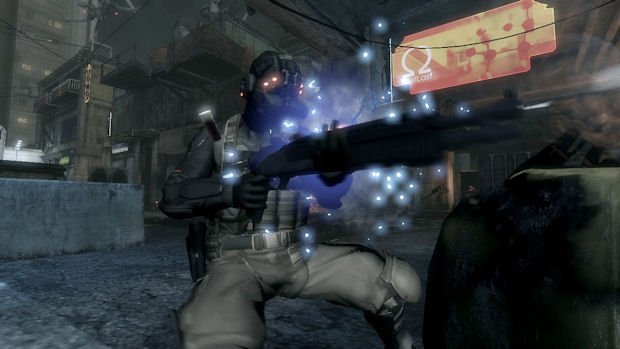 Presentation is pretty damn awful as well, with really cluttered, unhelpful menus that don’t really inform the player on anything. In the customization screens, there is no indication of where to go to find any of the new unlocks, and the weapon selection menus are messy and confusing. During the game, information appears in little black boxes that contain thin, grey, totally illegible text, so even when you do rank up and unlock something, you’ll have no idea what you won.

If there’s one way in which Blacklight impresses, it’s with its graphics. For an XBLA title, one has to admit that Tango Down looks really quite good, with visuals that almost look convincingly retail. Of course, retail games do look better than this game, so the graphics really aren’t worth buying the game for.

The easily pleased or easily fooled might convince themselves that Blacklight: Tango Down is an excellent game, thanks to the smoke and mirrors put in place by the developers. After all, a fully-fledged first-person-shooter with impressive graphics on XBLA/PSN is pretty outstanding, and it is tempting to forgive the game’s issues due to the ambition on show. However, ambition and success are two entirely different things, and Blacklight just isn’t successful at anything, save for constant irritation. The game looks good and aims high, but the problem is it’s just not fun. At all.