I find myself unable to properly convey the experience of playing AaAaaAaAAA!!! — A Reckless Disregard for Gravity with the space allotted in an introductory paragraph (and the short description I initially had in mind, “quasi-realistic skydiving arcade-action” game is as boring as it is useless), so I’ll just point you to this trailer.

So, you’re confronted with what appears to be a multi-genre indie game about falling from spectacular heights and netting equally spectacular scores. You experience a mixture of mild excitement and tentative anxiety. What do you do? What do you do?

Presumably, you hit the jump for my review of the game. 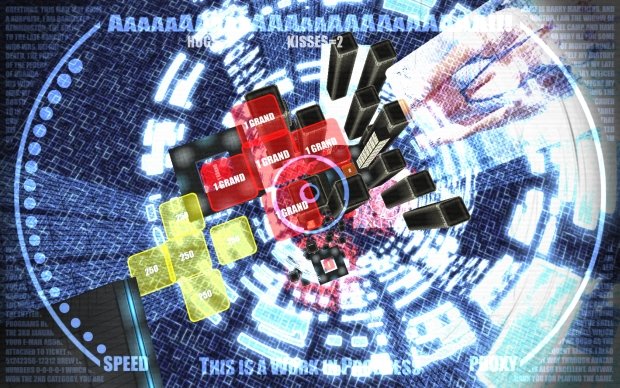 AaaaaAAaaaAAAaaAAAAaAAAAA!!! — A Reckless Disregard for Gravity (PC)
Developer: Dejobaan Games
Publisher: Dejobaan Games, Direct2Drive, GamersGate, Impulse, Steam, WildTangent
Released: September 3, 2009
MSRP: $15.00
I feel a bit odd reviewing Aaaa(etc.), considering almost nothing about the game has changed since my preview a few months back. Everything is just as exhilarating and hilarious as it was in June — there’s just much more of it, and a few new things have become apparent after finishing the completed version.
Aaaa(etc.), for the uninitiated, tasks players with jumping off very high buildings, putting themselves in as much danger as humanly possible, and trying (with varying degrees of success) to safely land without liquifying yourself. It gets a bit more complicated than that as the game progresses — you’ll alternately encourage and flip off your fans and protestors, when you’re not intentionally colliding with birds or tagging municipal buildings with graffiti as you plummet past them — but more than anything, Aaaa(etc.) is about the terrifying thrill of rocketing toward the ground, teetering between speedy bliss and bone-breaking horror.
The game’s eighty levels are arranged on a rotating, three-dimensional menu grid, with subsequent levels only available once you’ve unlocked at least one level adjacent to them. To unlock levels, you’ll need “Teeth,” the game’s currency du jour which can be earned by earning high score goals in each level. While the level unlocking structure in the earlier preview build felt frustrating and desperate — I’d constantly get four star ratings in every level, but just barely be able to afford new levels — the full game allows for much more relaxed, elegant progression. You won’t need to get 4 or 5-star rankings on every single level in order to see all the content, though you’ll probably be missing out on a lot of fun if you don’t at least try. 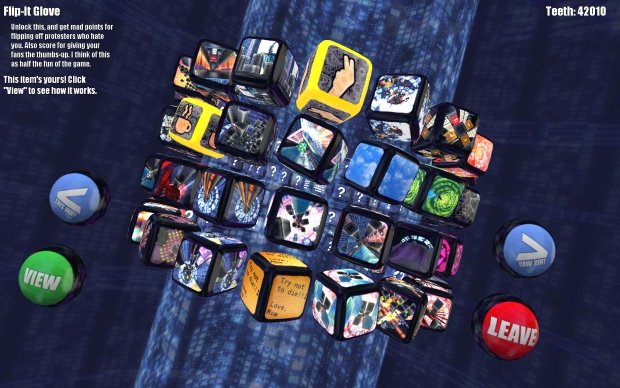 The levels themselves aren’t terribly difficult to survive; they focus much more around the challenge of attaining high scores and finding interesting paths to the ground than anything else. In many ways, Aaaa(etc.) could prove to be crack for leaderboard junkies; with the game’s intuitive scoring system (staying close to a building gives you one “Hug” per second, each worth one hundred points, while almost touching a new building nets you a one-time “Kiss,” worth a thousand) and various level routes, one could presumably spend a shitload of time trying to earn five-star rankings on each level.
On acompletely  gameplay-unrelated note, almost every cosmetic aspect of the presentation is injected with a pleasant mixture of surreal injokes and 4chan-esqueInternet humor. Let’s just say that one of the levels is titled, “I Accidentally the City of Boston,” and leave it at that.
The act of playing an average level feels not entirely unlike a combination of Burnout, Battletoads, and a game you’ve never experienced before but long to see more of. The game’s title, however unwieldy, is damned appropriate: the best levels teeter between pants-shitting vertical terror and clever, strategic score chasing. Much as I hate to say it, there’s a level near the game’s end full of rotating death-propellors and incredibly narrow tunnels which did actually make me scream aloud, twice, in excited terror. The first scream took the form of a half-dozen vowels of ascending volume. The second scream, made after I exited the Tunnel of Death, consisted of something like “I AM THE INFINITE; I CAN SEE FOREVER”. 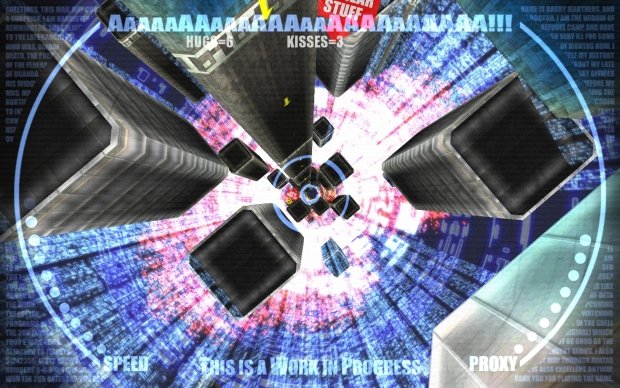 Still, I found myself wanting a little bit more than what the game offered. While it’s perfectly entertaining to spend eighty levels and eight or so hours chasing high scores and plotting out ideal Kissing paths, you’re asked to repeat too few strategies too frequently for much of the game. Look around for alternate routes; stay really close to buildings; memorize the map to optimize your score. The aforementioned Tunnel O’ Death level (not its actual name, though I can’t remember what it was called) and a few others — especially the ones chock-full of spectators to flip off and buildings to spraypaint — do a great job of mixing things up, but there simply aren’t enough of these game-changing levels. Around After you’ve bought all the abilities available to you around the game’s midpoint, the levels begin to blend into one another as your scoring strategies stagnate.
The last dozen or so levels nicely spice things up with almost shmup-esque obstacle formations that make the feel more like survival challenges than the far more numerous high-score perfection runs, but I would have liked to see more strategic and emotional variety in the game as a whole . I can’t help but long for a We Love Katamari-esque sequel which plays around with the core gameplay in more varied ways. Not to mention, there’s unfortunately no real ending to the game — you just unlock all the videos and levels and that’s it.
Still, a little repetition and the lack of a conclusion do little to diminish the overall product. Sagging midsection be damned, Aaaa(etc.) is still an original, frequently hilarious work that will renew your faith in the indie gaming scene. Whether you’re the type who can spend hours climbing leaderboards, or if you’re just looking for a blisteringly imaginative game that defies simple categorization, you’ll find something to enjoy in Aaaa(etc.).
Apart from food, clothing, bills, medical care, transportation, art supplies, or a donation to a cause of your choice, I can’t think of a much better way to spend $15 this month.